The Palau Güell was one of Gaudí's early works. His relationship with the wealthy businessman Joan Güell i Bacigalupi was to "yield architectural works which today boast international renown" according to the brochure we received as part of our tour. Gaudí designed many things for Don Güell. We saw two of them in Barcelona: the Park and this home, now owned by the city. 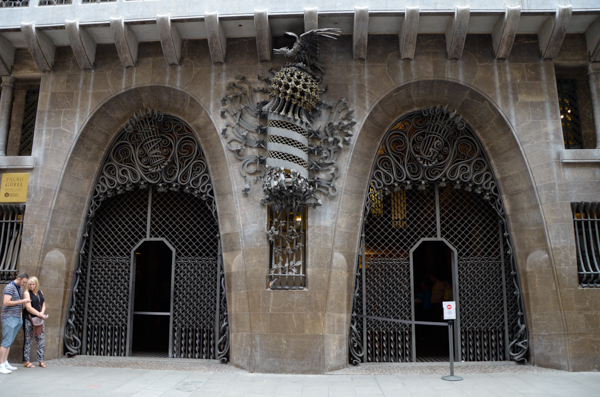 The entry features one of Gaudí's first uses of the catenary arches. He gave Güell several choices for the entry and this is the one he chose.

It's difficult to see in this compressed image, but the initials "E" and "G" are contained in the decorative ironwork at the top of the arches.

The creature resting on the "globe" between the arches looked like the missing link between dinosaurs and birds. 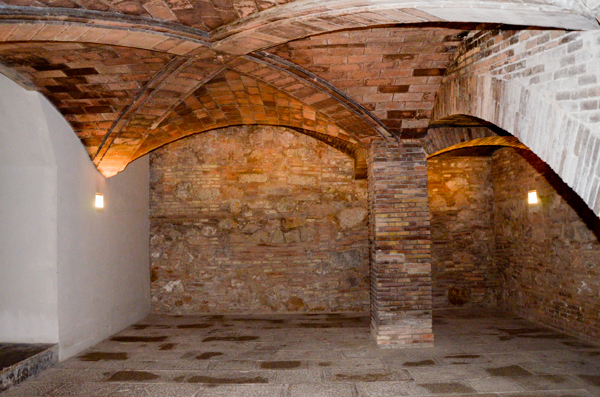 I had read about the stables underneath the house and was glad to see that our audio tour started there. Architecturally they were impressive, but I can't imagine a horse liking them much. Most of the fittings have been removed, of course, so they may have been more hospitable then. Not that many people back in the day cared much about what their horses might or might not like.

There were systems incorporated into the construction to prevent flies and odors from adversely affecting the house's occupants. 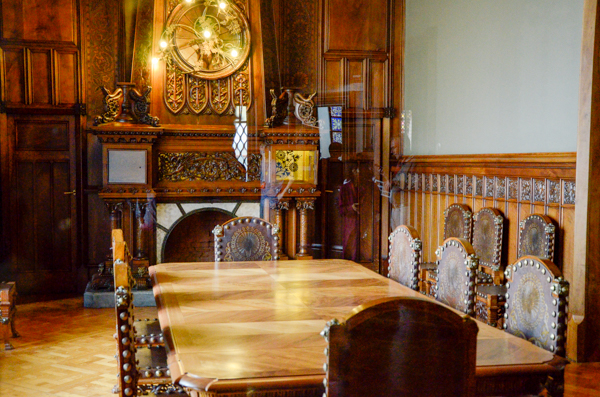 The dining room featured custom-designed furniture, a beautiful parquet floor and an elaborate fireplace. (The glass shielding the room added some reflections. They aren't ghosts!) 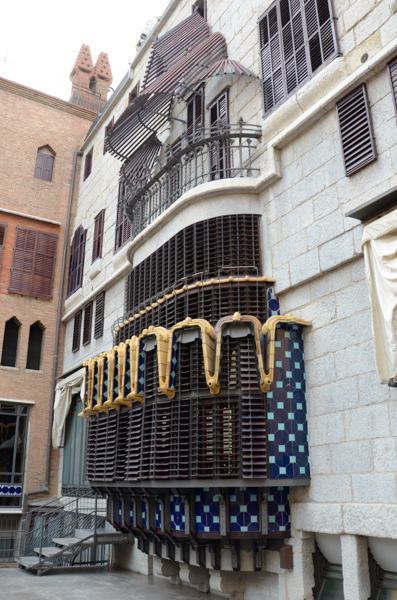 I was fascinated by the complex screening of this oriel window. It was hard to get oriented on this cloudy day, but I'll bet it is south-facing. 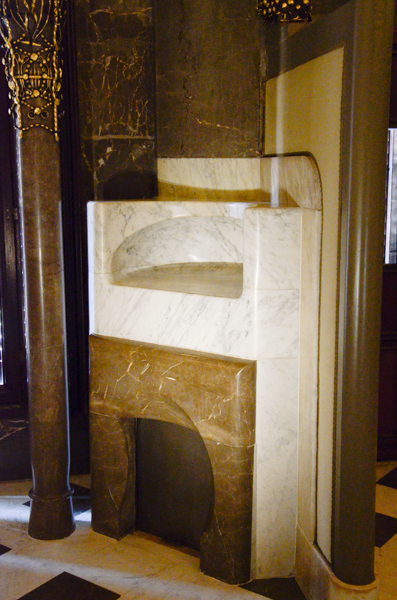 There were very many very elaborate fireplaces. I don't believe that they were all Gaudí designs. I do recall that this one in Señora Güell's bedroom was. It is much starker than his typical work. 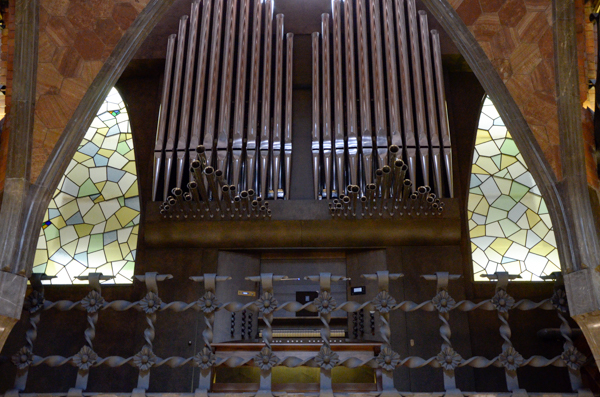 The central hall was three stories high with an enormous skylight on the roof. It featured this pipe organ, which was programmed to give periodic "recitals" throughout the day. The hall was originally designed for receptions, musical evenings, and also family religious observance. There was a large alcove with an altar that could be used for services.

This organ replaces the original one that had deteriorated beyond repair over the years when the house was used for other purposes. 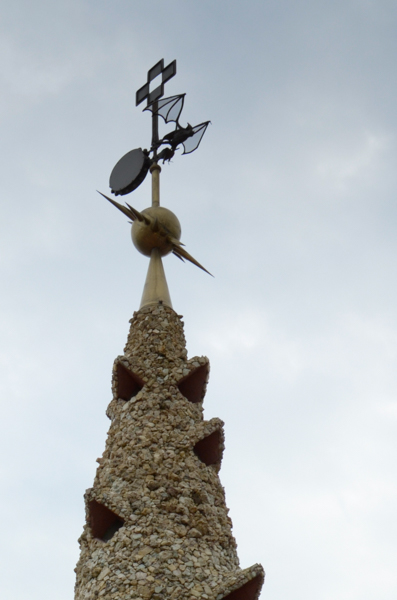 Luckily the rain held off because the roof is closed in the rain -- rightly so because it is not level and moreover is paved with slippery tiles.

This is the skylight tower over the great hall.

The gossamer-winged bat on the weathervane is a wonderful touch. 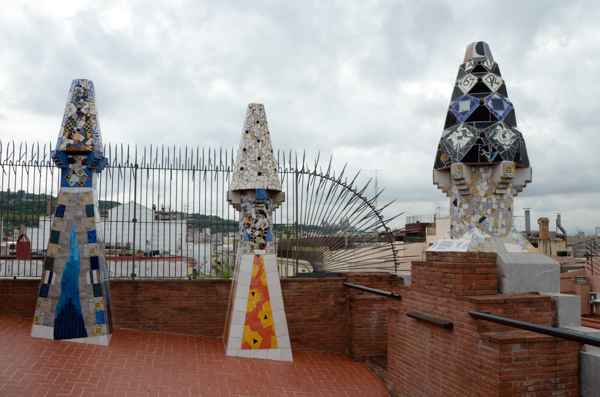 The roofscape of the Palau Güell is definitely looking forward to Casa Mila & Casa Batlló. Many of these chimneys were decorated with glass rather than ceramic, however.

Over the years the decoration had deteriorated considerably. There was a video in the attic museum that described the restoration. 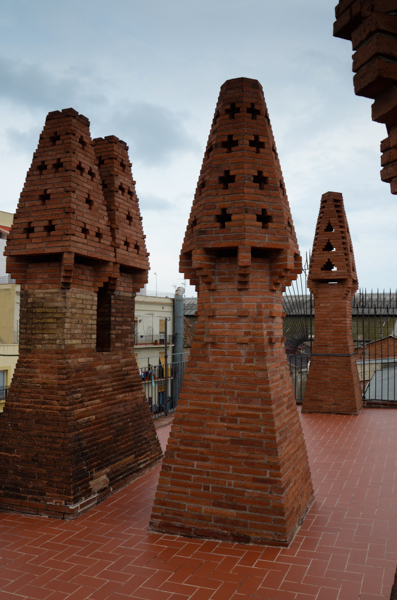 Not all of the chimneys were decorated wtih trencadis but even the brickwork is decorative. 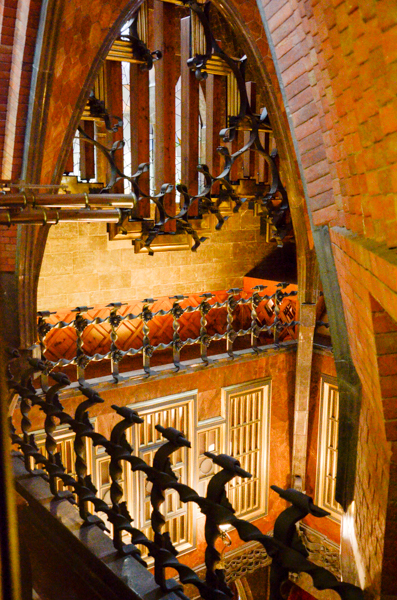 There was an obscure sign in the attic that pointed into an alcove where I saw this amazing overview of the central hall. I am on a level with the organ. Some of the horizontal pipes can be seen coming from the left of the picture (if you know what you're looking for).