We spent our last morning with Fred, who gave a slide show on Philadelphia architecture. It was basically a review of the places we had already seen, but now they were put into context.  There are great representations of many different styles in Philadelphia: Colonial, Federal, Greek Revival and others up to and including International Style and Post-Modern.

One advantage of having gone through tough economic times is that there is less impetus to tear down and build "bigger & better." This preserves old buildings that are sturdy enough to survive demolition by neglect. Since there were a lot of sturdy buildings, Philadelphia has retained much of its architectural heritage even though it may now be used for something other than its original purpose.

Earlier in the week Fred had told us about two experiences in William Penn's life that had led him to specify the design of the city in the (at that time) forward-thinking grid pattern. One was the great plague of London in 1665 and the great fire of London the following year. At the time diseases such as the plague were thought to result from miasmas or bad air. There was no conception of disease-causing germs, which weren't discovered until much later. The grid pattern enabled freer flowing air. It also enabled fire-fighting equipment to be moved more easily through the streets. When combined with the extensive use of brick, a fire-proof material, the likelihood of disastrous fires was much lessened. At least the fire-fighting part worked; there were various epidemics until the true causes of disease were discovered.

After Fred's talk we bid goodbye to our companions of the week (and a great bunch we all were). Jim and I were back on our own. 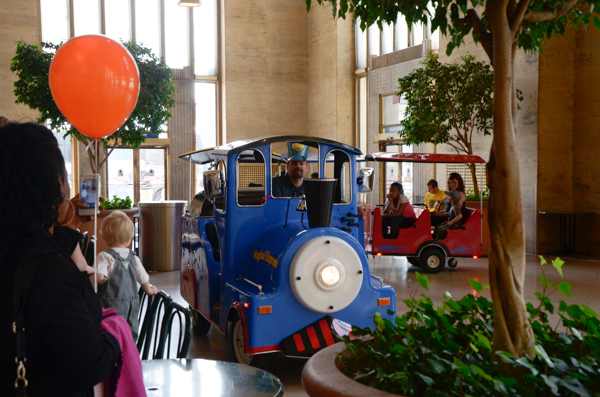 Our first expedition was to 30th Street Station for Train Day. Our first sight on entering the station was this little choo-choo for the children. There was quite a line waiting for short rides around a blocked-off section of the concourse. 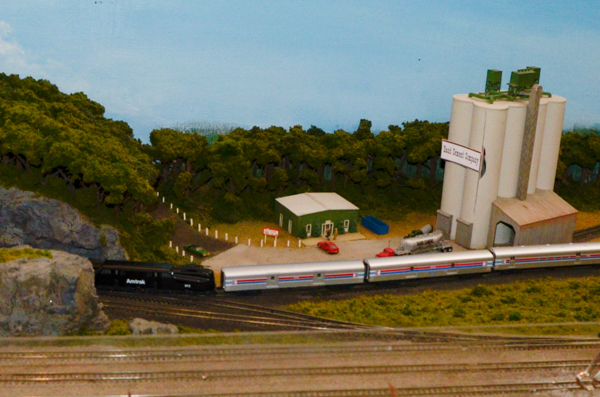 Another exhibit was this N-gauge model railroad. It was a great hit with young and old alike. Anyone who has ever had an extensive model RR set-up (I had a couple of friends who had HO layouts) will appreciate the effort required to put together a temporary installation.

This tiny Amtrak model was chugging along the track. 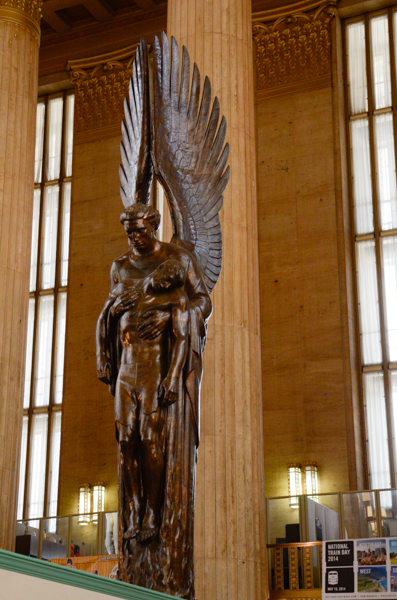 The WWII memorial to Pennsylvania Railroad workers who died in the war has always been a favorite of mine. We have recently seen the movie The Monuments Men and were inspired to read the book by Robert Edsel on which it was based. This sculpture was created by Walker Hancock, one of the real Monuments Men (alas, he didn't make it into the movie). 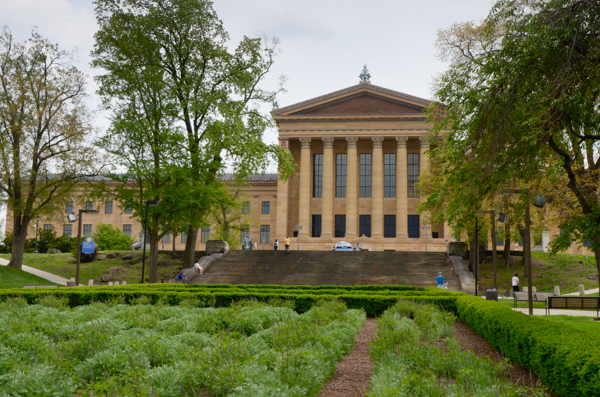 It was too early for the gardens to be in bloom, but I bet they are spectacular a little later in the year. 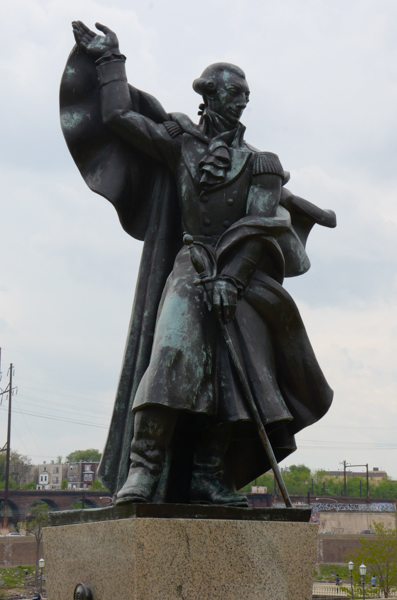 There is a sculpture garden all along the terrace. Since we had spent so much time with the Revolution, I had to get a picture of the Marquis de La Fayette.

On his final visit to the United States in 1824 he collected soil from Bunker Hill to be placed in his grave, which is in France. 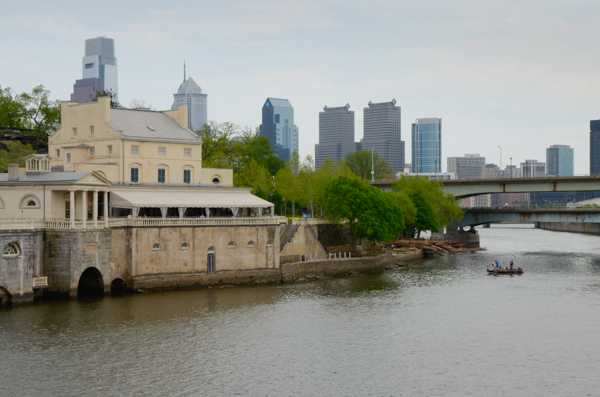 The Fairmount Water Works opened in 1815 to provide Philadelphia with a reliable supply of water from the Schuylkill. Water was pumped up to reservoirs on top of the hill where the art museum now stands.

It is an outstanding reminder that civil engineering can be beautiful as well as functional. The facility was designed by Frederick Graff.

Unfortunately the interpretive center was closed due to the extensive flooding the week before. 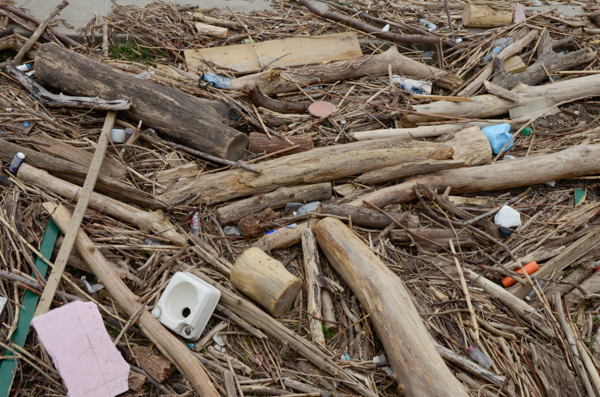 The extent of flooding can be seen in this pile of debris that had washed up onto the plaza by the river. Everything including the kitchen sink! (OK, it may not be a kitchen sink, but it is definitely some kind of sink.)

Between the time we visited the water works earlier in the week and today, there had been another large log washed down to hang up on the dam.

Another picture of Boat House Row with the diversion dam in the foreground. There is a fish ladder that allows migrating fish to get past this dam.

The boat houses are lighted at Christmas. I used to love seeing them from the train when we visited Jim's folks for the holidays. 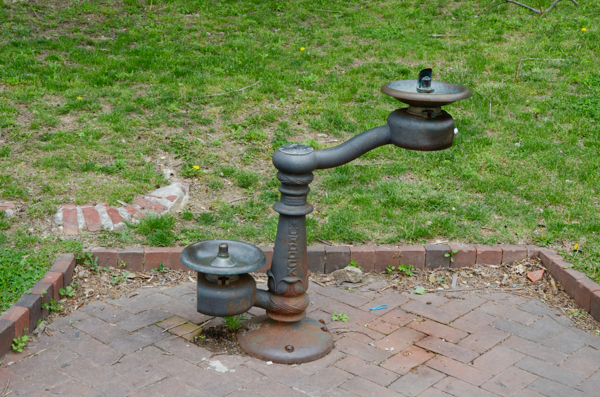 How many drinking fountains have you seen to service dogs? 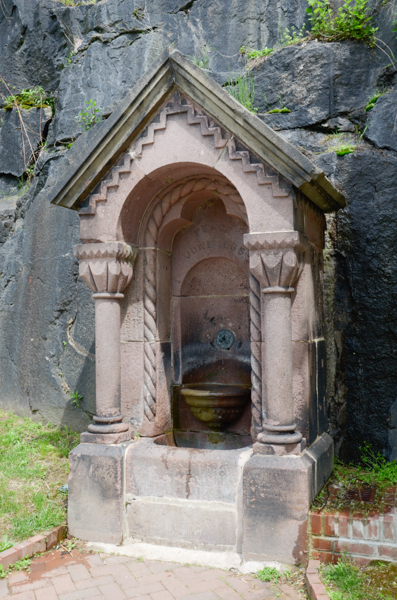 Nearby there is a "Peace" fountain celebrating the end of the Civil War. 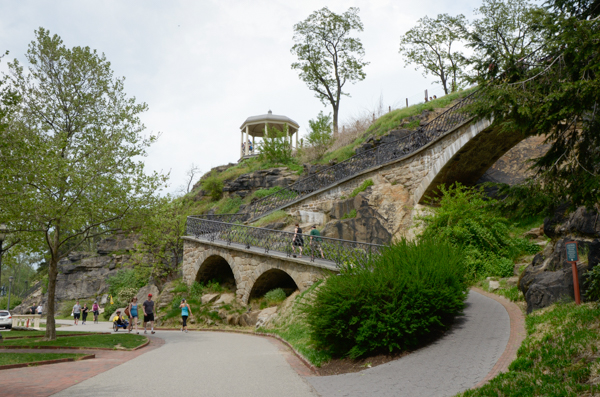 After the water works were taken out of active service, the site was used for a variety of things including an aquarium and a swimming center. It gradually deteriorated, but beginning in the latter part of the 20th century it was restored to its original appearance.

This ramp leading to the top of the adjacent hill has a lovely cast-iron balustrade, which was recreated from the few surviving panels and old photographs.

We huffed and puffed up to catch the bus back to the hotel.

The spot must be a favorite spot for weddings. This was one of two wedding parties that we saw. Good thing we didn't wait to eat lunch at the Water Works Restaurant because it was booked for a wedding.

Wherever this particular party had booked their reception, I hope it was warm enough to thaw them out. Between the drizzle and the wind and the chiffon, they were looking pretty uncomfortable. There's an advantage to a January wedding such as we had: you KNOW it will be cold!

The rest of the afternoon was plagued by intermittent downpours. We made it back to the hotel in relative dryness, but Jim ran out to replenish our stash of booze and got soaked. Such are the wages of sin.

Saturday evening we went to the opera Salome with the "Cultural Pearls" Road Scholars and some of our own group who had stayed for an extra day or two. It was a joint production of Opera Philadelphia and the Philadelphia Orchestra. As the review at the link above points out, the full orchestra overpowered the singers from time to time. Our seats, at the back of the concert hall, made it virtually impossible to read the super-titles, but the acoustics were great and the story line wasn't so complex that the lack of the translation was a problem.

Jim loved Philadelphia Orchestra concerts when he was growing up. I don't know how he escaped opera since his mother was a great fan. The tickets (and the clothes) may have been too expensive. As a birthday present for her we got super seats at Wolf Trap for one of Beverly Sills' final performances. Mom Slack was in heaven.

Use your "back" button to return to the overview page or continue with us to visit the Barnes Arboretum.