Friday was our last full day of the Road Scholar program. It started with a presentation by Nancy Webster. The title in our handout was "Sages and Scholars," but it was more wider-ranging than that. She discussed the effects that climate had on Pennsylvania history, Quaker emphasis on scientific education and their botanical gardens, colonial Pennsylvania attitudes on woman's education, William Penn's architectural ideas, and many other topics. I wish I had taken notes. I also wish that the slide projector bulb hadn't burned out about a third of the way into her talk. 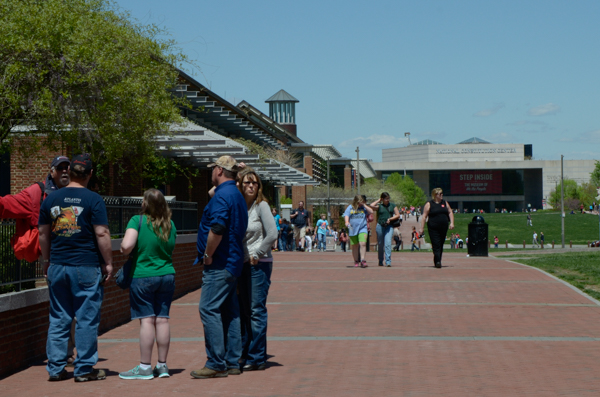 After our presentation we headed to the National Constitution Center (NCC). It is the large building in the background in this picture. (The Liberty Bell exhibit is to the left and Independence Hall is behind me.)

This center is dedicated to the presentation and interpretation of our Constitution. I wish a visit were required for everyone (especially our government's leaders) at least once in a lifetime – preferably every four years or so. 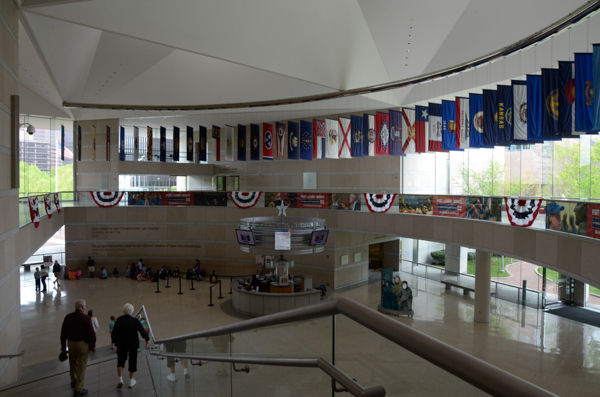 We started our visit to the NCC with a dramatization of the creation of our Constitution and our country as defined by it. I confess that I got choked up – it was very moving.

Afterwards we had time to peruse the exhibits at the center and ponder the controversial decisions behind the Constitution and the compromises needed to attain approval. The exhibits also described the changes that were made via the amendment process and the refinements in understanding that have occurred as the Constitutional language has been interpreted by the courts.

I feel this was one of the high points of our trip. 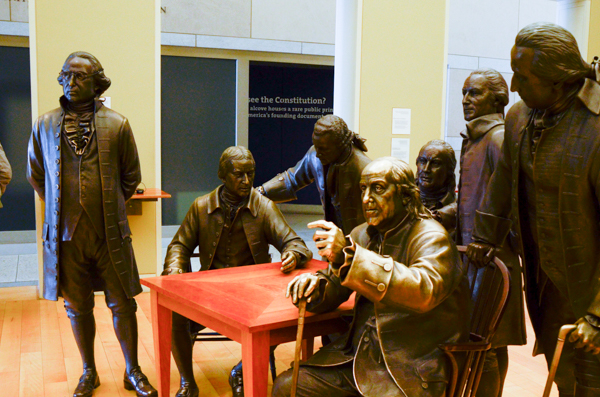 The final exhibit at the NCC is this room containing bronze sculptures of the statesmen who devised our Constitution. It was OK to get up close and personal with these representations.

Judging from the shine, Ben Franklin is far and away the favorite. 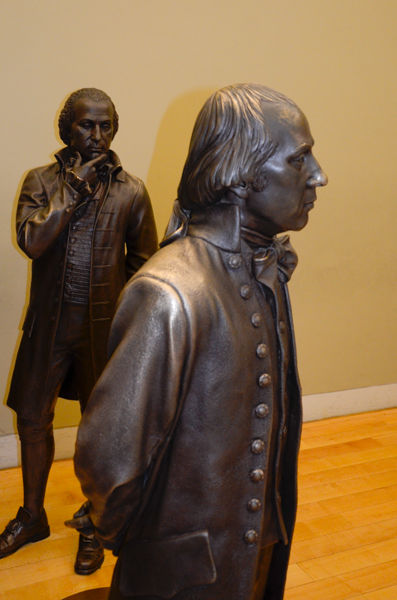 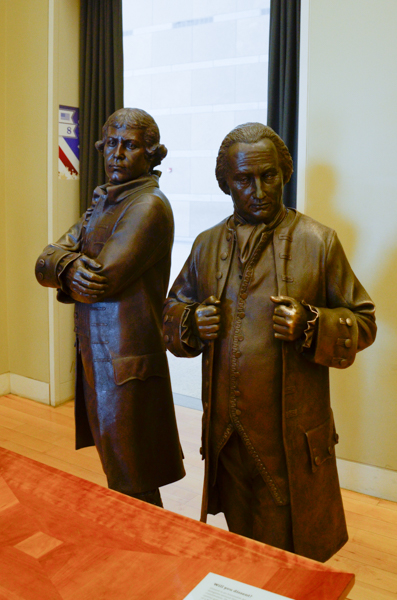 George Mason doesn't get nearly enough credit for his contributions both to the Declaration of Independence and to the Bill of Rights. His Virginia Declaration of Rights, drafted in May, 1776, and approved in June, was a major source of both. 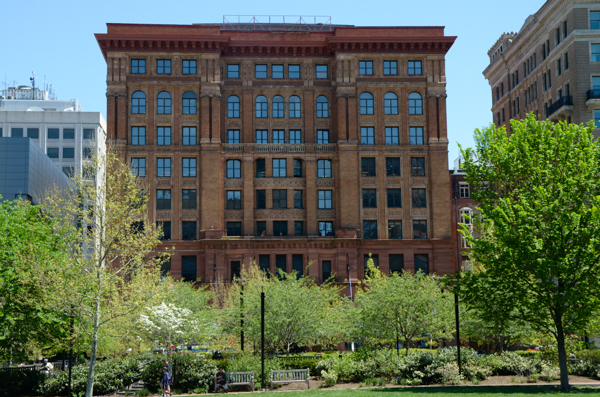 After our time at the NCC, we walked down the Independence Mall to The Bourse for lunch. It was an early commodities exchange in the US. The building was constructed in 1890. It is now an office building with a food court and shops on the ground floor.

Jim remembers when it was still a commodities exchange and was only open to the public a few days a week. 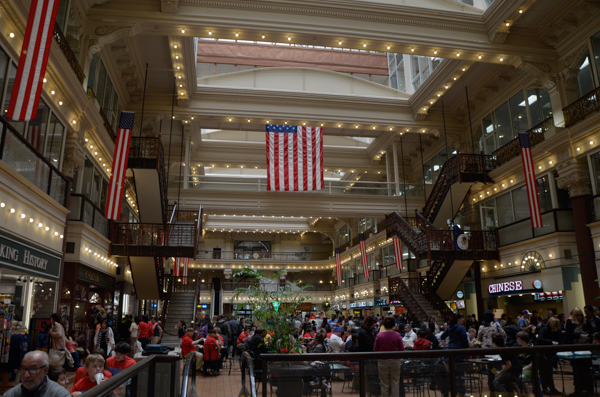 Yet another hopping place in Philadelphia.

The interior atrium of the building has been nicely preserved. 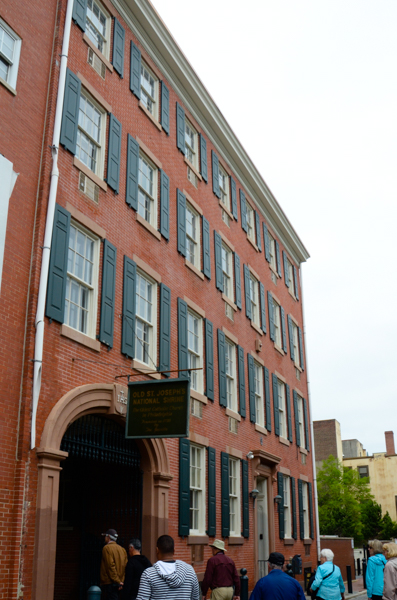 After lunch we visited a couple of house museums in the Society Hill neighborhood.

We passed by Old St. Joseph's Catholic church on the way. The practice of Catholicism was illegal in England. At first the colony of Maryland allowed Catholic practice, but that changed in 1704. Mass had to be practiced secretly in private homes and chapels after that time.

William Penn's Charter of Privileges granted freedom of religious practice to "all who worshiped one God" and many Catholics began to migrate to Pennsylvania. A chapel was built in 1733, but Catholic worship was challenged in 1734 since it was illegal back in the home country – and everywhere else in the English-speaking world. Thankfully the Charter prevailed and the chapel remained.

Even so, the Catholics maintained a low profile and from the outside this looks more like a house than a church. 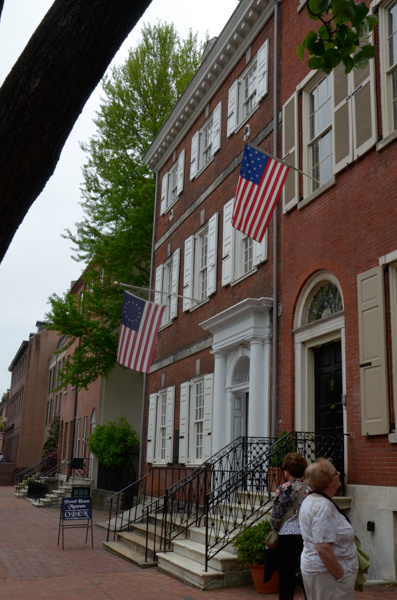 The Powel House was the home of an 18th century "power couple," Samuel and Elizabeth Powel. The movers and shakers behind the development of our Constitution would meet here over dinner and discuss options for controversial sections. The Powels were close friends with the Washingtons. 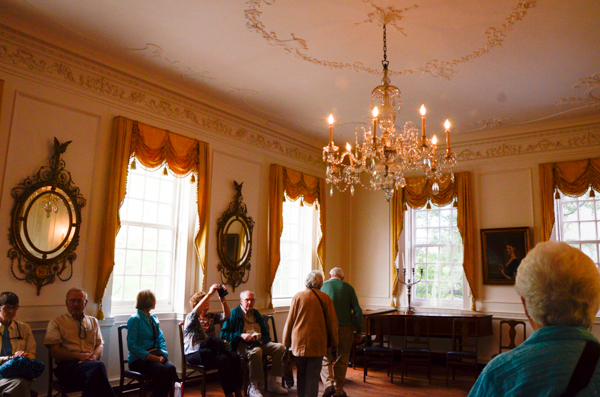 The elegant ballroom of the Powel House has been restored. At one time the house had been slated for demolition and the owners had sold the interior to the Philadelphia Museum of Art. The details seen here are reproductions.

We were told that the original decoration was hand-carved in wood.

Although the furnishings are true to the period only a few original pieces remain – including some of the china that had been given to the Powels by the Washingtons. 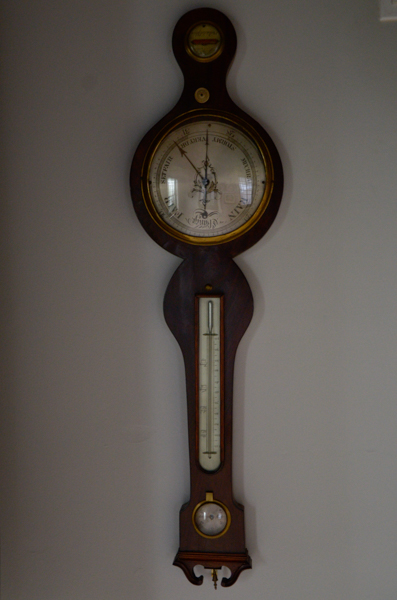 I admit it; I'm a techno-freak. I loved this combination barometer, thermometer & hygrometer. It was made in Philadelphia and is late 18th century. What wonderful detailing! 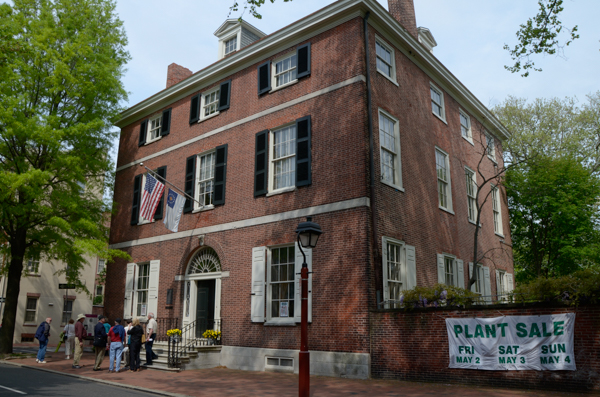 Our next stop was the house owned by Dr. Philip Syng Physick, the "Father of American Surgery." The house is the only surviving free-standing house in the Society Hill district.

At the time that the lot was purchased, there was an existing house that was incorporated into the new one. It can still be seen in the back corner – it has four floors rather than the three in the main house. 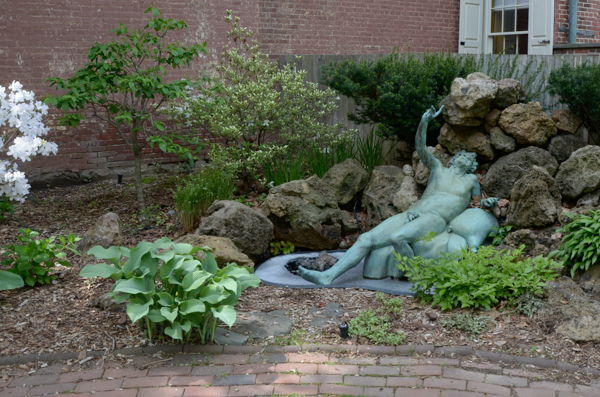 As might be guessed from the "Plant Sale" sign shown above, the garden is a lovely feature of the house. The rather naughty fountain was not in operation, but the azaleas and wisteria were really getting cranked up.

That evening we attended an honors graduation recital at the Curtis Institute. It was another high point of the trip. The performance hall is on the far left of this picture. We could never decide whether the rest of the structure was originally built as three separate houses or as one. They did all have unique addresses.

Use your "back" button to return to the overview page or continue to our next day at the Philadelphia Water Works.