Cradle of the Nation

Our first "official" day in Philadelphia started with a talk by Jackie Bagley entitled "Our Founding Fathers, Mothers, and One Horse." I of course perked up at the mention of the horse. The way I remember trips is through the pictures I take. Since I couldn't take pictures of the talk, I'm sorry that I didn't take notes because I've forgotten many of the people she covered in her entertaining presentation. The horse, however, was Brown Beauty, the mare that took Paul Revere on his famous ride.

After the talk we had some free time before lunch and our outing to Independence Hall. 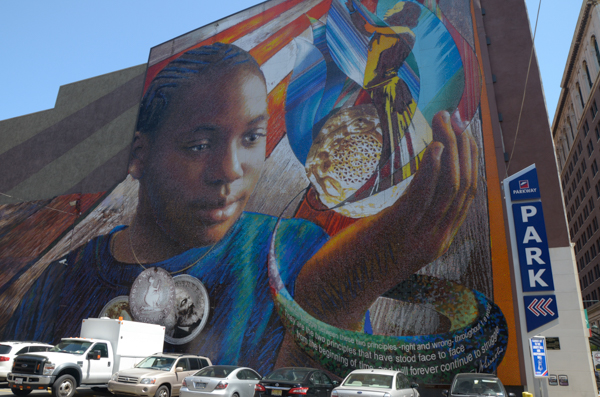 Some of us elected to walk. On the way we passed another of the many murals that decorate almost all spaces greater than a certain size. This was my favorite of the ones that we saw over the next few days.

The quote is from Abraham Lincoln: "It is the eternal struggle between these two principles -- right and wrong -- throughout the world. They are the two principles that have stood face to face from the beginning of time, and will ever continue to struggle."

The quote is from one of the Lincoln-Douglas debates and the subject is slavery. 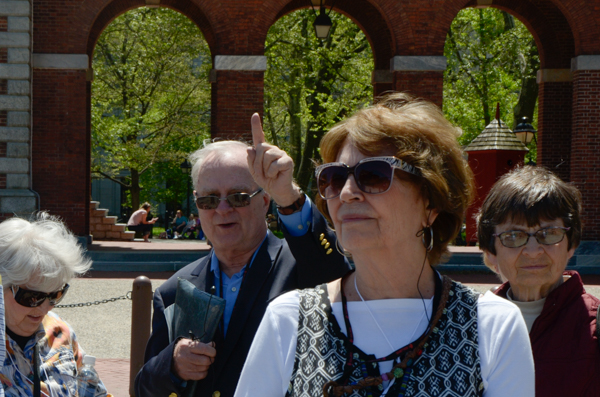 Our intrepid leader, Fred, provided expert guidance throughout our days in Philadelphia. He is pictured here with (L-R) Jane, Gail and Dixie.

Fred is a native Philadelphian and the city could not have a more enthusiastic booster. 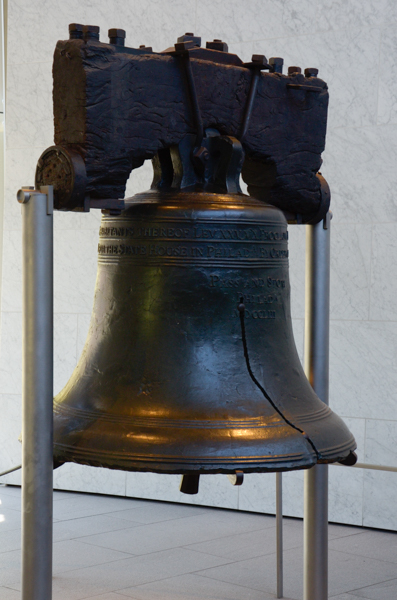 Our first stop was to see the Liberty Bell.

It is housed in an impressive facility purpose-built for it with extensive interpretive displays. There was always a crowd admiring it.

I was interested to learn that it isn't the large crack that silenced the bell, but a small hairline fracture extending from it. 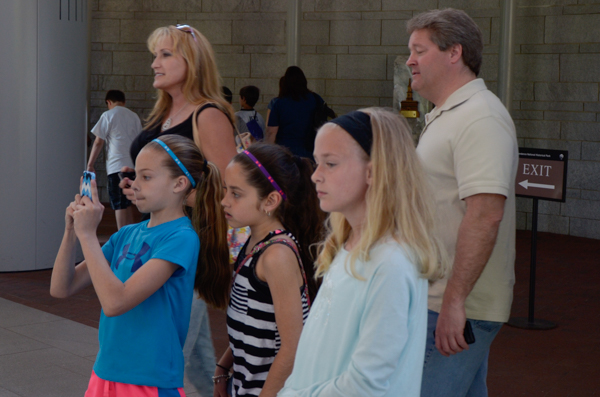 As was typically the case, the overwhelming majority of our fellow tourists were children. 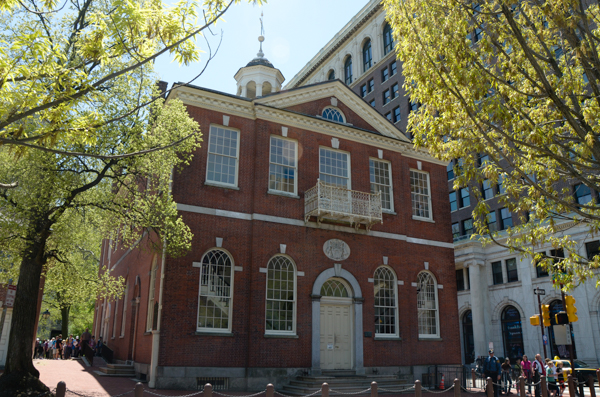 Our next stop was Congress Hall. Philadelphia was the young nation's capital from 1790 to 1800 while "that other city" was being built in the backwaters of the Potomac.

(Full disclosure alert: I lived most of my life in and around Washington, DC, and I love it dearly.) 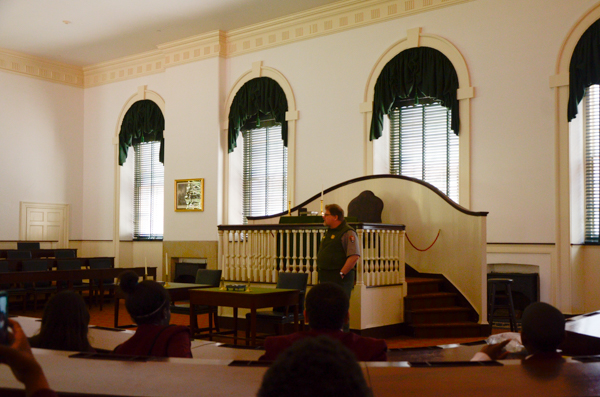 The House of Representatives met in this chamber. After the capital was moved to Washington, this building was returned to its original purpose as the courthouse. It has since been restored as much as possible to its appearance as the home of Congress.

The Senate met upstairs. Their digs were rather more sumptuous – as is true today. 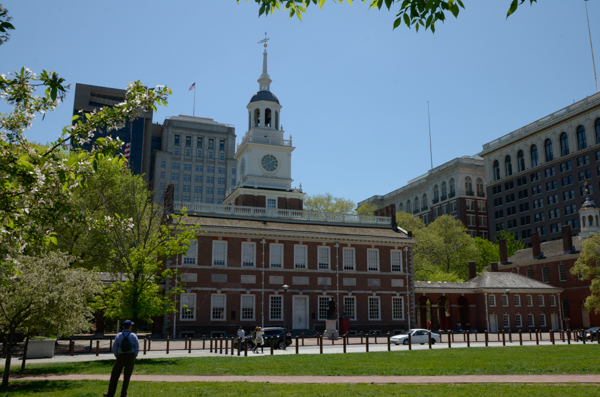 Just to the east of Congress Hall is Independence Hall. All of these old buildings were on the verge of being torn down in the early 19th century to make way for new and more modern facilities. There was, however, a 50th anniversary celebration of the success of the revolution. One of the dignitaries who attended was the Marquis de Lafayette, who actually gave Independence Hall its name. Prior to that time it was simply called "the statehouse."

It was after his visit that the true significance of this building – where first the Declaration of Independence and then the Constitution were adopted and signed – was appreciated. 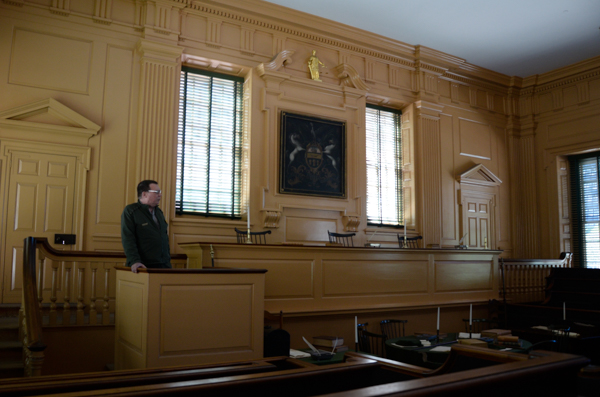 This room served as the courtroom of the Pennsylvania Supreme Court in the 18th century. 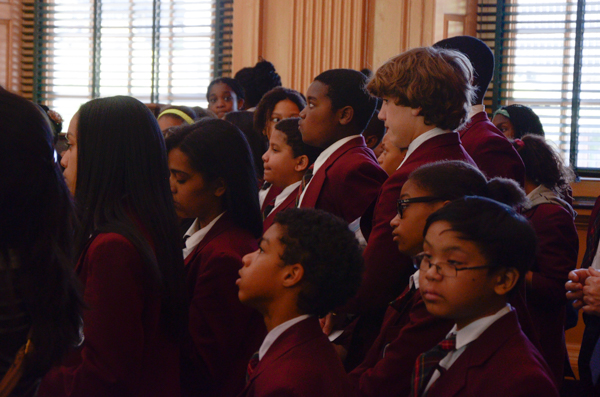 Everywhere we went among the historical monuments we were accompanied by school groups. For the most part the young people were respectful and well-behaved (this group from a Long Island Catholic School was particularly so).

Our leader Fred said that he preferred shepherding school groups in the fall. By the spring they are looking forward to summer and are somewhat, um, less focused in general.

The Assembly Room is where both the Declaration and the Constitution were accepted and signed. During the 18th century it was the meeting room of the Pennsylvania legislature, but they allowed the 2nd Continental Congress to use it in May, 1775.

During that meeting the Continental Army and Marine Corps were created with Washington as head of the Army. The delegates also, however, drafted an olive branch petition to King George III. Many believed (incorrectly) that it was Parliament that was oppressing the colonies with onerous taxes and that the king would side with the colonists. 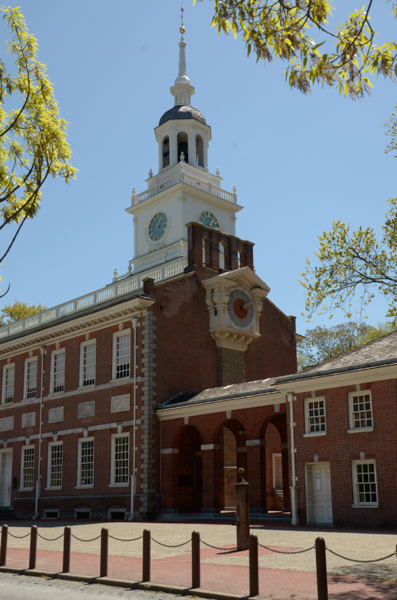 King George refused to read the petition, however, and instead declared the colonies in rebellion as an result of the Battle of Bunker Hill. The path to war was inevitable. Even the moderate representatives realized that the king supported Parliament.

The Declaration of Independence was then developed by a committee and drafted by Thomas Jefferson. A modified version was approved on 4 July 1776, and a fair copy was formally signed on 2 August 1776. Many sources declare that the Liberty Bell was tolled on the day it was first read, but that is likely to be a mere legend.

It's tempting to wonder what might have happened if King George had accepted the "olive branch," but some, notably John Adams, were convinced that revolution was inevitable. 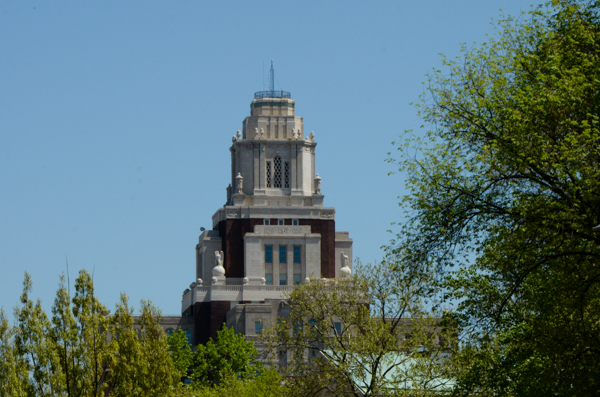 This is the tower of the US Customs House as seen from Independence Hall. Jim once worked in this building and we visited it later. 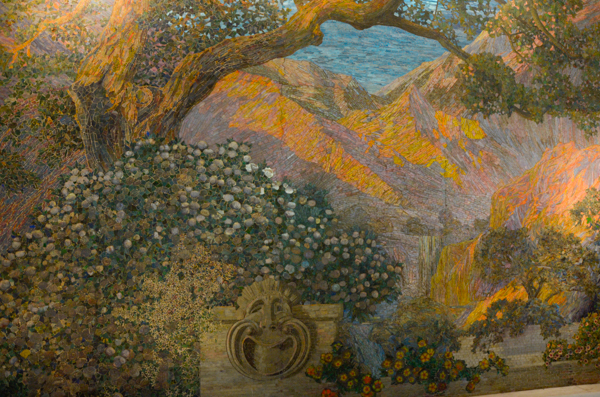 As we left Independence Hall, we walked to the former headquarters of the Curtis Publishing Company. (We would later attend a concert at the Curtis Institute founded by the same family.)

There is a mosaic called The Dream Garden by Maxfield Parrish in the lobby. It was executed by Tiffany Studios. At one point the mosaic was to be sold, disassembled and moved to a casino, but a grass-roots effort saved it. It is now owned by the Pennsylvania Academy of Fine Arts, which we would also visit later.

This is only a portion of the entire mosaic. The lighting of the piece did not do it justice. 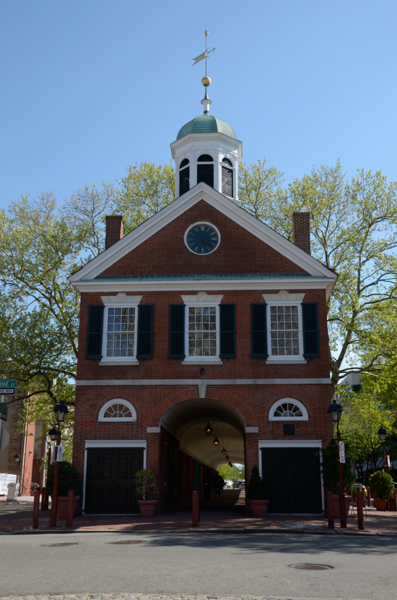 After the visit to The Dream Garden, most of our group elected to head back to the hotel. Three of us, myself and Glenn and Dixie Colson, decided to try to find a garden that had been highly recommended by Jackie Bagley. She had said it was on Pine Street, but none of us could remember where exactly.

Optimistically we headed for Pine Street. We eventually found the garden, but only after many dead-ends and wrong turns. We did get to meet several nice folks, who didn't recognize anything corresponding to our vague description ("azaleas, wisteria, tulips, Pine Street").

In the meantime we stumbled on some note-worthy spots.

This is the Head House, which contained equipment used by what may have been the nation's first volunteer fire department. It was built in 1805. Behind the Head House is the block-long "New" Market, originally built in 1745.

This is again the site of a lively farmers' market on Sundays, May through December. 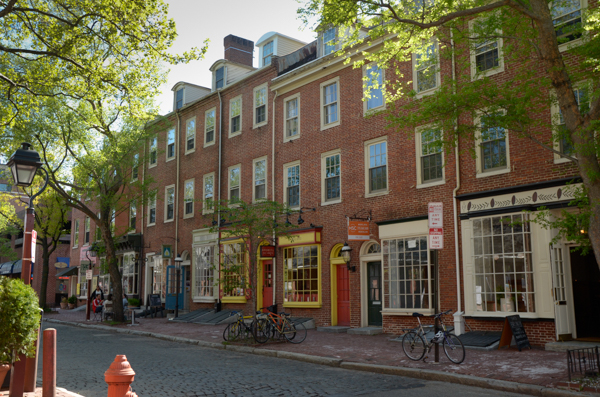 Buildings across the street from the Head House above. This is part of the Society Hill neighborhood, which has been seeing a renaissance, as has much of Philadelphia. 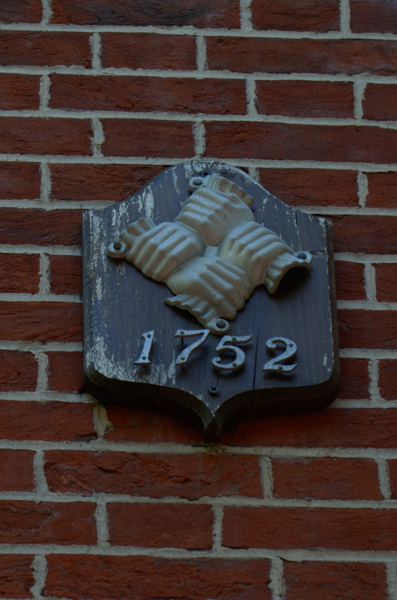 Many of the houses we saw on our travels had fire marks. This one is of the Philadelphia Contributionship insurance company. It is the oldest mark in the US. The company still exists. The Contributionship believed trees hindered fire suppression efforts and excluded them. 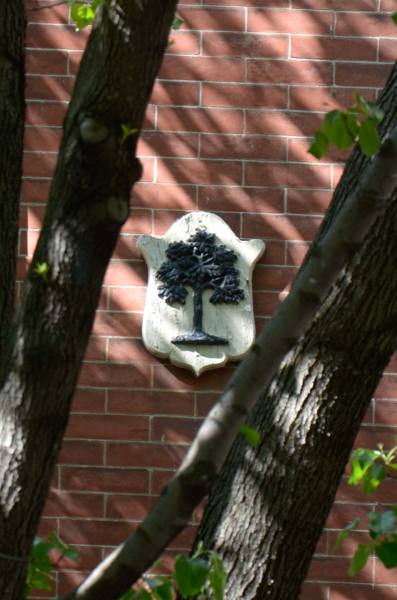 The "Green Tree" mark on the right was issued by a competitor, which agreed to insure buildings with nearby trees. 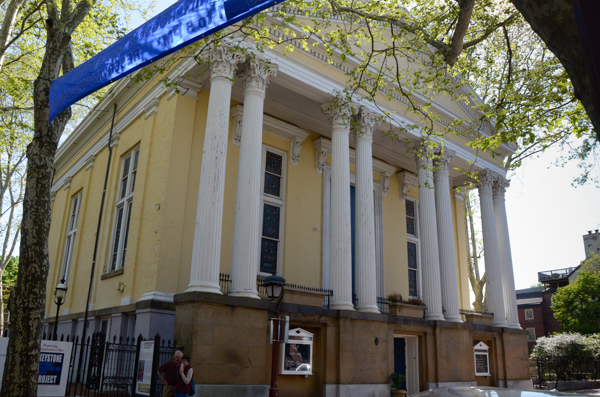 We passed Old Pine Presbyterian Church in our search. One of William Penn's founding principles for his colony was freedom of worship. In England only the Anglican church was legal, and he had been imprisoned multiple times for his own Quaker beliefs.

There were many churches of many denominations throughout the old parts of town. Although the colony wasn't very old before Anglicans outnumbered Quakers, Presbyterians, Jews, Catholics, etc., no religion was ever forbidden by law.

On a later visit to Philly I attended Sunday services here. It is beautiful inside. 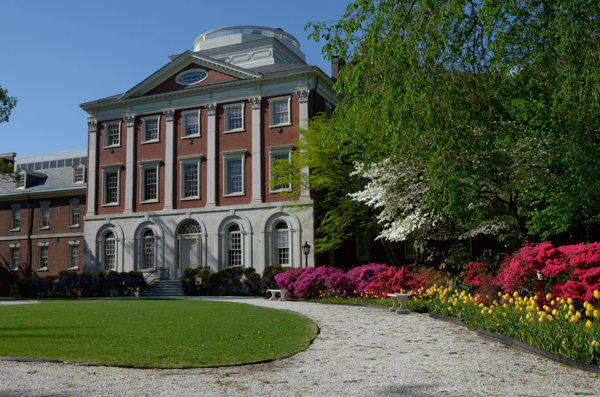 At last we found the mystery garden! It is the lawn of the Pennsylvania Hospital, which was founded in 1751 by Benjamin Franklin and Dr. Thomas Bond. This structure is the center section, completed in 1804. There is an adjacent large modern facility that can't be seen in this picture.

In 1774 there was a proposal to plant a medicinal garden on the hospital grounds. This was not actually done, however, until 1976 as part of the bicentennial celebration. That garden is to the left of this building.

A visit to this building is on the agenda for our next visit.

We had all forgotten that the reason our morning lecturer had mentioned the garden in the first place is that it contained this statue of William Penn holding the Pennsylvania Charter of Privileges. The statue is of lead and was given to the hospital by John Penn in 1801 or 1804. The moral is: lecturers never know what their audience will remember!

The charter was prepared by the local leaders, by the way, and not by Penn himself. Early Pennsylvania politics are too complicated to summarize here.

Our next day's excursions include, among other sights, the Philadelphia Academy of Fine Arts.