The rest of our Road Scholar companions would be arriving and our program would officially start this afternoon. In the meantime, our plans for the day included a notable Philadelphia sight that was not on our program: Eastern State Penitentiary (ESP).

In order to understand the pictures and discussion below, it's important to know what the ESP was intended to look like. This image has the following credit: By Mike Graham from Portland, USA (Flickr) [CC-BY-2.0 (http://creativecommons.org/licenses/by/2.0)], via Wikimedia Commons. 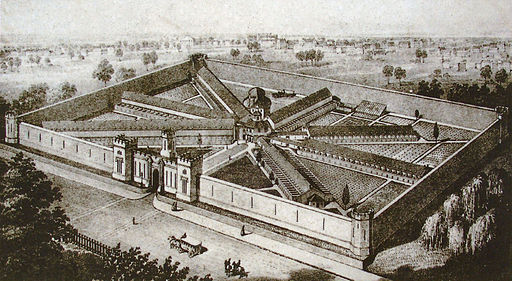 The source of the image is a lithograph by P.S. Duval and Co., 1855. The original was actually produced by Samuel Cowperthwaite, convict #2954. It shows the radial design produced by architect John Haviland. The first cell-blocks built were the single-story ones on the right. Later ones were two-story. Even later additions were placed between the original radial arms. The design allowed guards in the central structure to monitor all of the individual corridors.

There have been entire books written about the design, Haviland, penal philosophies, etc. What I have written below is simply what we experienced.

On our arrival at the prison we were greeted by Jamie, one of the many docents that help interpret the features of this fascinating place. Jamie showed us how to operate the middle set of gates that led into the prison. There were three pairs of gates to enable thorough examination of all vehicles leaving the secure space to prevent prison breaks.

It was a complicated mechanism of locks and levers.

The prison was opened in 1829 and remained in operation until 1971. After it was closed and abandoned it quickly fell into ruin. In 1988 the Eastern State Penitentiary Task Force came together to lead the drive to preserve the facility, which opened to the public in 1994. The official web site has a timeline describing the lifecycle of the prison.

There is no intention to "restore" the prison in its entirety. The goal is to stabilize the structure to prevent further deterioration and to restore selected areas to aid interpretation. 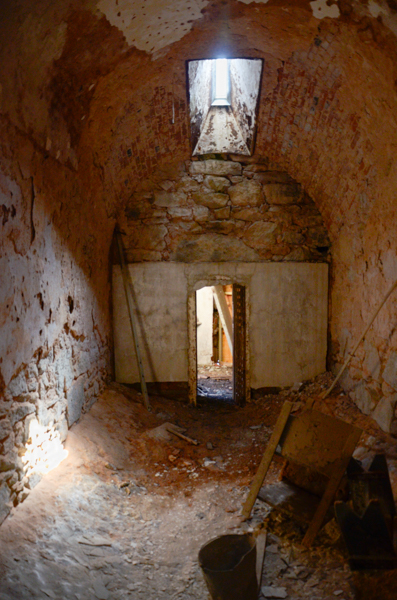 It is hard to appreciate how revolutionary this facility was when it was first designed and built in the 1820s. There were numerous competing ideas on how to "reform" offenders. The philosophy behind the Pennsylvania system of prison design was that offenders who were kept isolated would have the opportunity to reflect on their lives and repent their wicked deeds. (This philosophy was not universally accepted even at the time.) None of the philosophies seem to dwell on the hunger and hopelessness that drove many people to crime in the first place.

With this ideal as its basis, the ESP was designed to keep inmates completely separate from everyone. The individual cells, of which this is an example, were quite large. Each cell was originally entered from a small private exercise yard, which can be seen beyond the doorway, rather than from an interior corridor. The only interior access was through a small opening used to supply food.

This layout was found to be unworkable shortly after the first prisoners moved in and was modified for the parts still under construction. 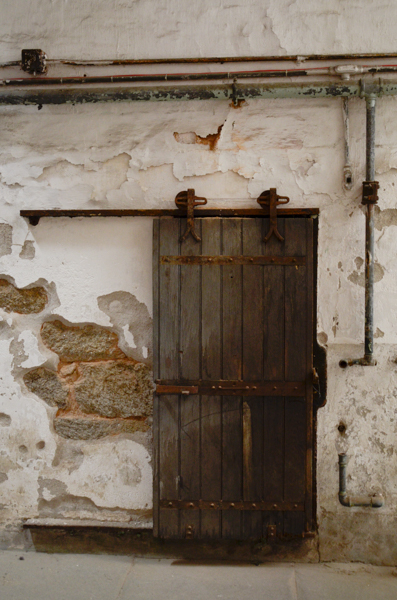 Newer cells were constructed with access to a central corridor and older cells were retrofitted. The cells now had an interlaced metal strap door, which allowed ventilation, which could be covered by these sliding wooden doors.

Over the course of time prisoners devised ways of defeating the locks of the metal doors, which received several modifications for increased security. One of the hands-on demonstrations was opening and closing a cell door. This was such a time-consuming process that it became one factor leading to the closure of the prison.

Modern prisons use electric locks on the doors.

From the beginning each cell had cold running water and a primitive toilet that was automatically flushed periodically. This was a major innovation in its day, but necessary to support the solitary confinement. There was another clever engineering feature that provided (more-or-less) efficient heating, but it didn't lend itself well to pictures. 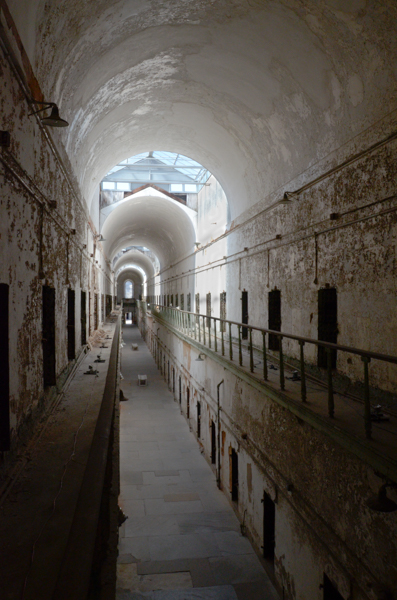 It quickly became obvious that the prison as originally designed would not be large enough. Therefore another modification that had to be made during prison construction was the addition of a second floor to the newer cell blocks.

This presented a significant design challenge because the exercise areas behind each ground floor cell had to be kept open and the upper floor had to have some equivalent exercise space. The problem was solved by building two rooms for each upper story cell.

The skylights in the corridor and the individual rooms relieved the dreariness of the prison.

While we were visiting, by the way, a local camera club was also touring the facility. Some of them had elaborate tripods and suchlike to help them get better pictures. There were so many wonderful images possible. I can imagine that it was a favored location for such groups. 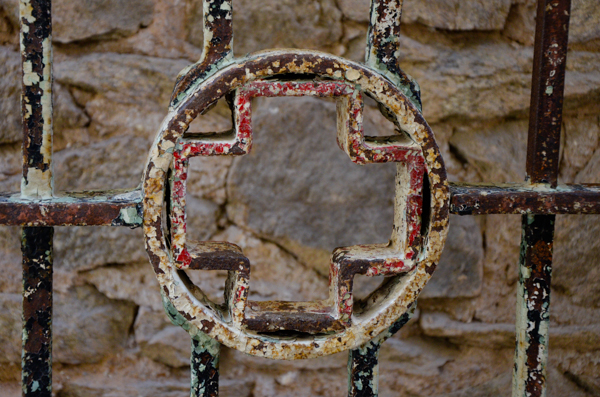 There was a "behind the scenes" tour that took groups back to the hospital block. The medical services provided prisoners were quite good.

In the days that women were also incarcerated there were several babies born to inmates who had been pregnant when convicted. The babies were placed with relatives or other caretakers as soon as practicable. 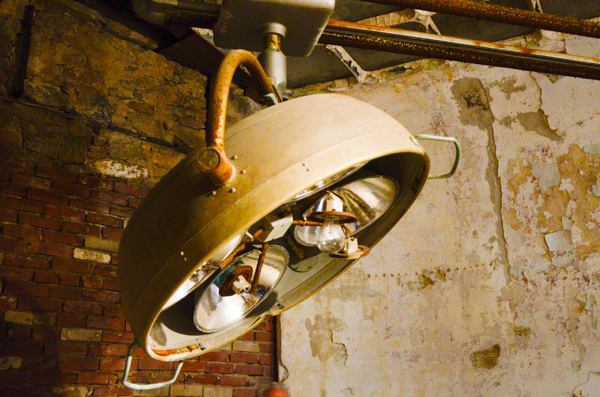 This light was shown in a 1960s photo of the surgical suite, so it dates from at least that time. Doctors from the local medical schools performed needed surgeries and provided other treatments.

Equipment and furnishings throughout the prison were simply abandoned when it closed. 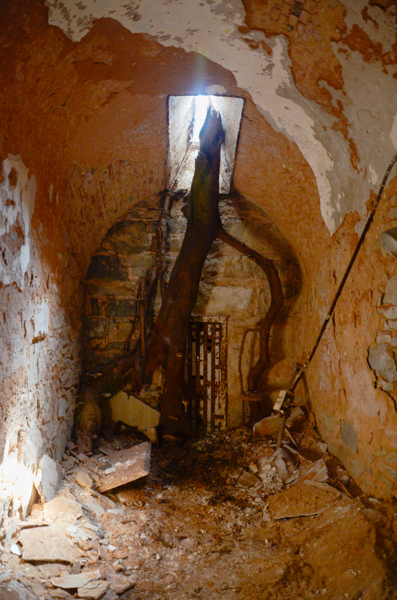 During the decades it was abandoned, the prison was taken over by trees and other greenery. Although the trees have been removed as part of the stabilization efforts, there are many places where roots can be seen within cells. 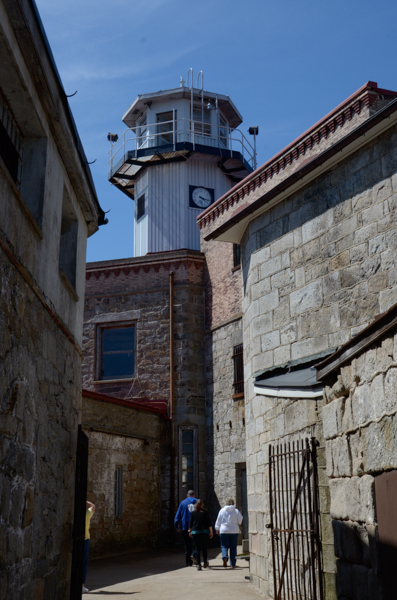 Over the years as more space was needed for prisoners and the solitary confinement system broke down and was eventually discarded, more cell blocks and common areas were tucked into the original radial design. By the end, the place was something of a maze.

This guard tower was over the "hub" at the center of the radial arms. The cafeteria is encroaching on the right. I don't recall what the added structure on the left included. 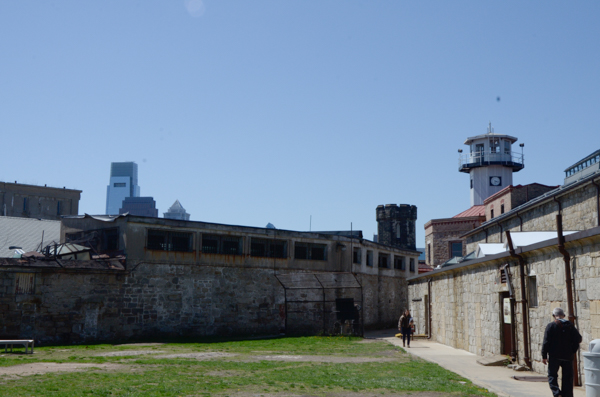 As the private exercise spaces were gradually taken over by other uses for the space, there were common spaces set aside for exercise. Eventually team sports such as baseball were introduced.

The proximity of ESP to downtown can be seen by the Philadelphia skyline visible over the wall. 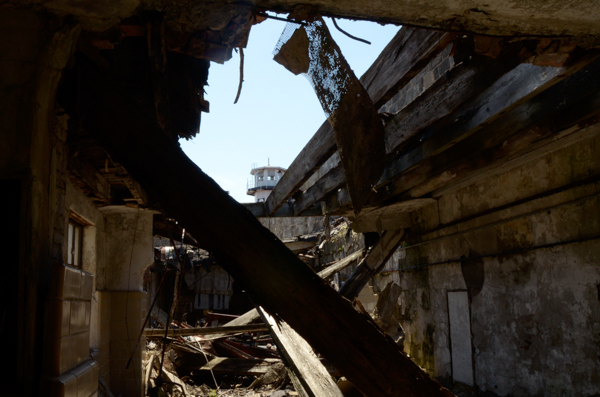 Another "behind the scenes" tour took us into the communal mess halls. It is clear why early visitors to the prison had to wear hard hats!

The newer portions of the facility are much more likely to have collapsed. The original portions were built with trained craftsment. Once prisoners were allowed to work together, prison labor was used to build (and sometimes design) these newer structures rather than trained masons and carpenters. Their work didn't stand the test of time nearly as well. 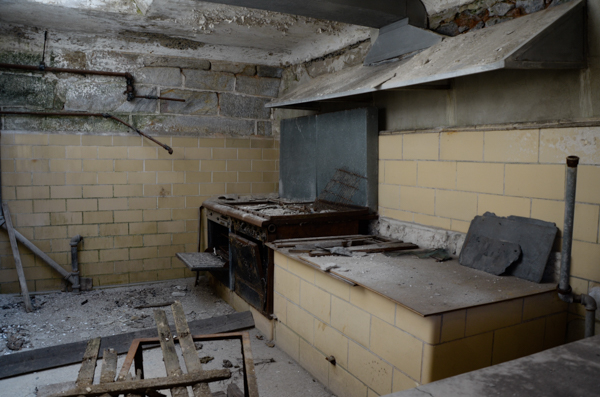 This wasn't the actual kitchen, which isn't open to the public. It was one of the food preparation areas used to to keep foods hot. As noted above, much of the equipment was simply abandoned along with the building. It probably wasn't of much use anyway. 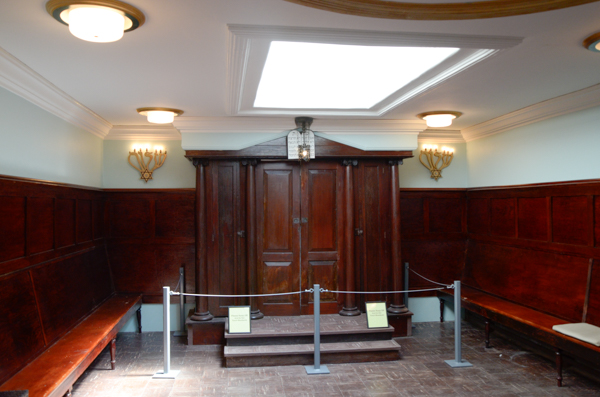 One fascinating exhibit was the prison synagogue. Once prisoners were allowed to come together in groups, it was constructed in the early 20th century for the benefit of the Jewish prisoners. Check the link for the story of its restoration. 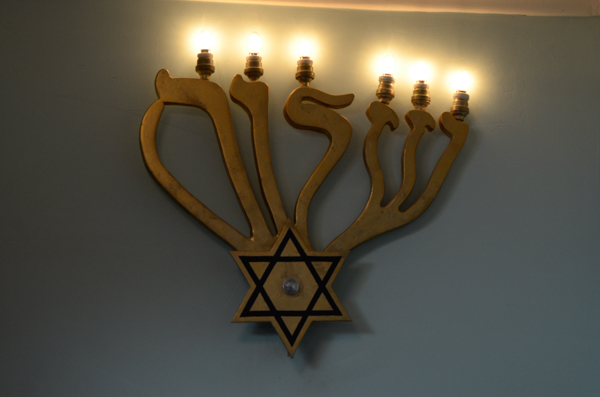 A close-up of one of the lamps:

We were told that it spells out the Hebrew word "shalom," meaning peace.

Al Capone was an inmate at ESP for a brief time. This was his cell and it is furnished like it had been when he was there. Seems like some prisoners were more equal than others. The radio was playing his favorite music. This space is not nearly as spartan as the run-of-the-mill cells.

I doubt the stay here encouraged him to reflect on his life and repent his wicked deeds.

We saw much more at this fascinating place, but there is room for only so many pictures. 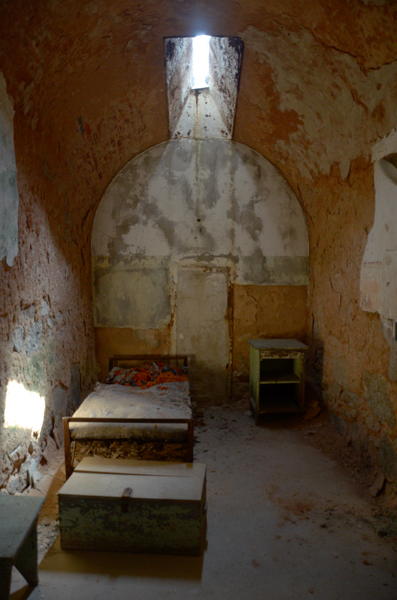 This illustrates much more typical furnishing.

Observe the filled-in door that once led to the outside exercise area. 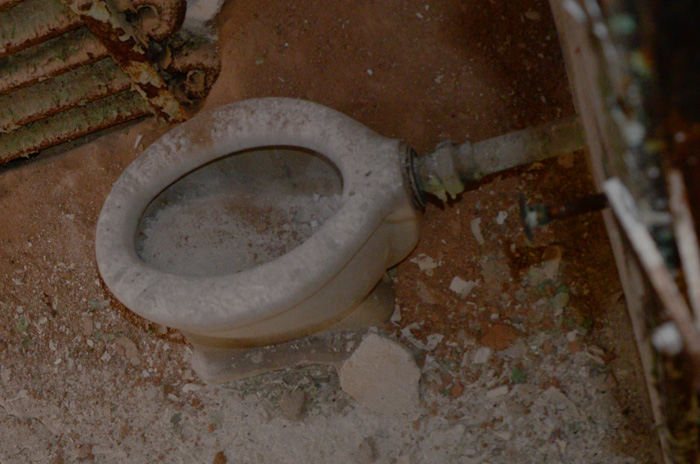 The standard-issue toilet, which was located in the right-hand corner beyond the frame of the picture above. 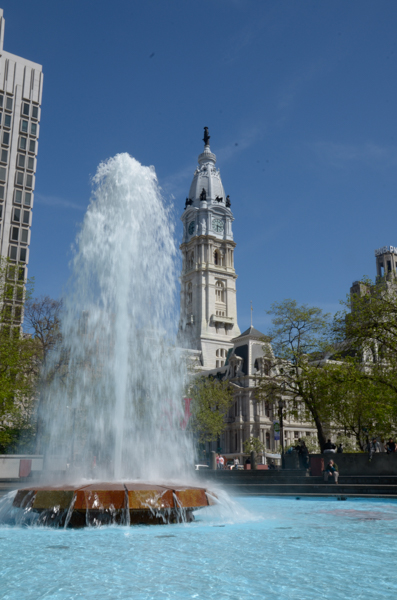 After our morning behind bars, we had lunch and returned to the hotel for a while. There we met our tour leader, Fred Vincent, who was setting up to hand out our tour information. We picked up the materials and then went out to enjoy the beautiful day.

This is Philadelphia City Hall as seen from the John F. Kennedy Plaza, better known as Love Park. 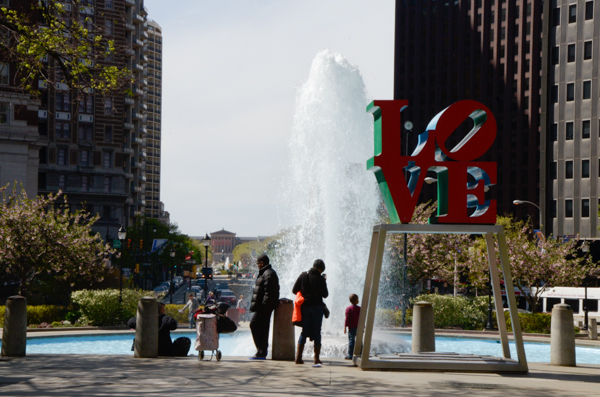 The sculpture that gives Love Park its name.

I had to have a picture of the Welcome Center. The cover of Jim's old map of downtown features this building, which was brand new at the time the map was printed in 1960!

Mid-century modern is coming back into style, which may save it from possible demolition.

The City Hall tower viewed from the Swann fountain in Logan Square. The bronze sculptures are by Stirling Calder, the father of Alexander (Sandy) Calder known for his stabile and mobile sculptures. Stirling Calder's father, Alexander Milne Calder, produced the sculpture on the City Hall including the statue of William Penn on the top of the tower.

There is also a sculpture by Alexander (Sandy) Calder on Ben Franklin Parkway, but I don't have a picture of it. Three generations of sculptors! 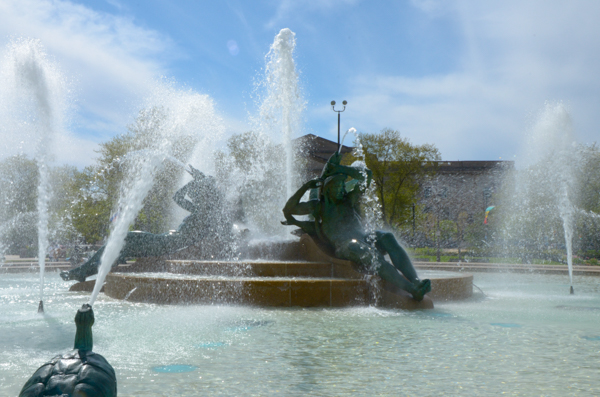 Another view of the fountain. I had to include it because of the way the water caught the light.

Join us for the fourth day of our trip (and the first day of the official Road Scholar Program). We will be visiting Independence Hall, the Liberty Bell and other more traditional sights of Philadelphia.