After church & lunch on Sunday, we walked to the Mütter Museum for a time with the grotesque exhibits there. We then continued on across the Schuylkill to the main Drexel campus. Finally we walked down Market Street back to the hotel. We have done a lot of walking on this trip! 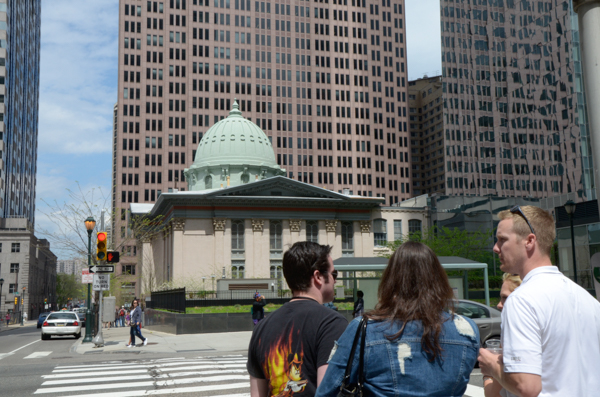 There are a couple of Presbyterian churches within walking distance. This Sunday I elected to visit Arch Street Presbyterian.

The current building was constructed in the mid-nineteenth century. Although the interior may be monochrome, it is very ornate! At present the congregation is small but diverse and growing. It has a rocking gospel choir and participates in all aspects of the downtown community.

On the previous day we had discovered a small park named variously Chestnut Park or John F. Collins Park. It was tiny, but very welcoming. There were several other corporate or municipal parks nearby that were cold and deserted.

We had to make another stop. 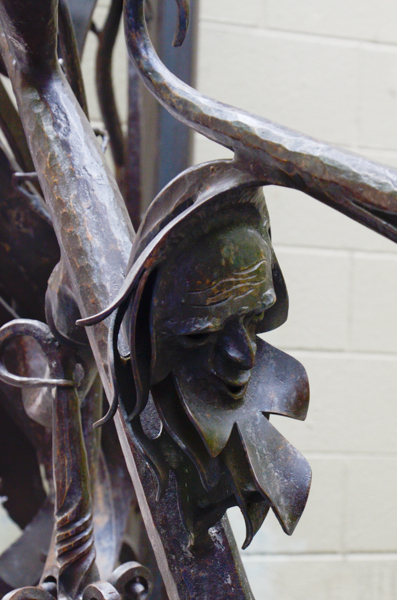 The little park had wonderful metal gates with all sorts of designs. These two little details will have to stand in for the whole. (At left & below.) 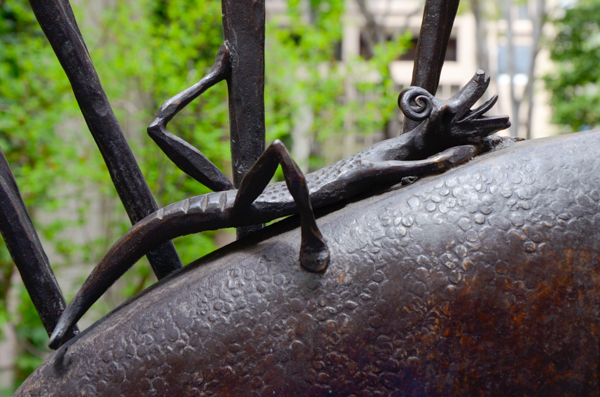 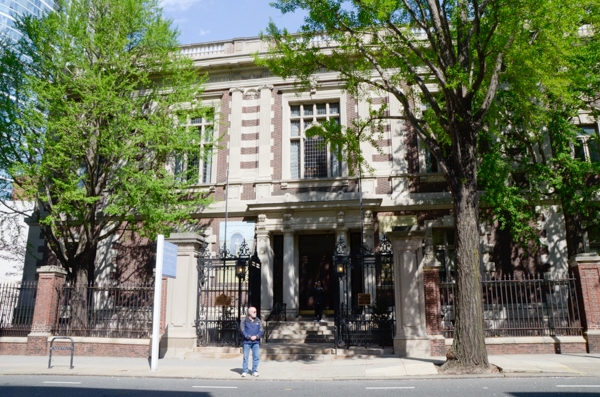 Our next stop was at the The College of Physicians of Philadelphia to visit the Mütter Museum, which originated with the collection and legacy of Dr. Thomas Mütter.

It bills itself as "disturbingly informative" and it lives up to that slogan. 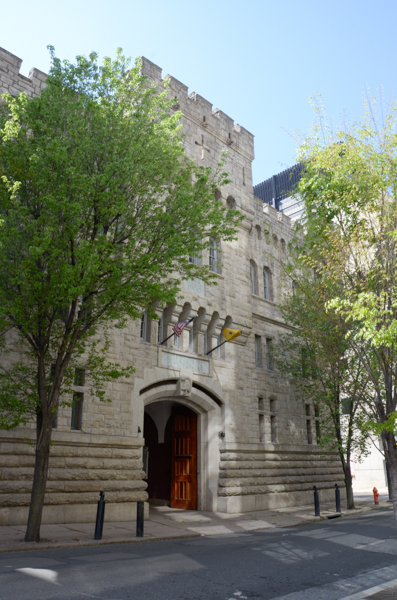 As we left the museum and headed toward the Drexel campus we stumbled onto this striking building. It turned out to be the headquarters of an organization that calls itself the First Troop Philadelphia City Cavalry. Neither of us had heard of it before, but it claims to be "possibly the oldest military unit of any kind that has been in continuous service to the Republic."

Members are required to join the National Guard. 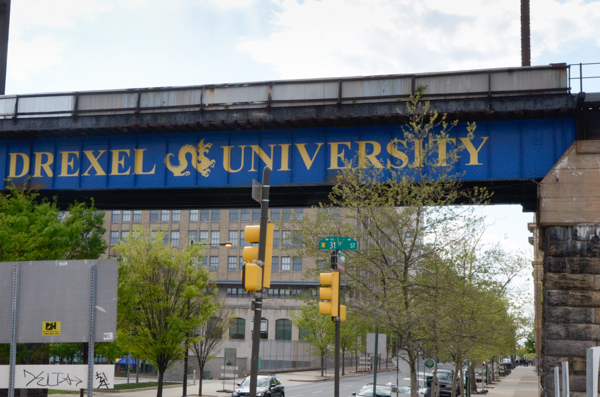 We are finally making it to the Drexel campus. Almost everything on campus has changed since Jim was a student, but he remembers the freight trains that ran on this line. They went right past one of his math classrooms. Whenever a train came through, the lecturer got a break because no one could hear him over the noise! 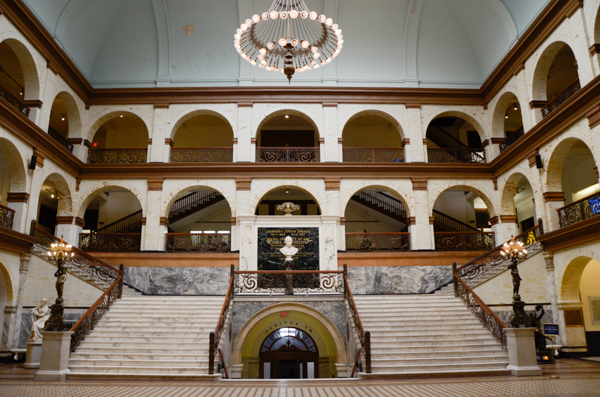 One of the few remaining original buildings is the 1891 administration building. It is beautiful inside.

Jim selected Drexel for his undergraduate work largely because of its cooperative program. It worked because his co-op experience with USGS led to a 40-year career with the organization. Moreover USGS paid for his graduate degree at Stanford. 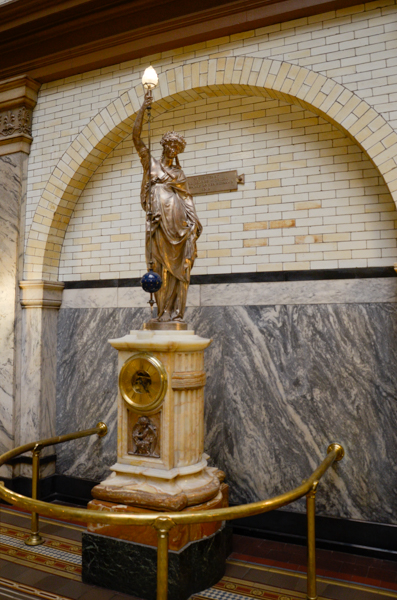 As befits a university with a strong engineering focus, the lobby ("grand court") is graced with this 1867 Eugene Farcot Conical Clock. The pendulum operates in a circular motion and drives the clock mechanism.

The statue is silver.

Also in the grand court is this sculpture "The Alsatian Vintner" by Frederic-Auguste Bartholdi. The students always called it "The Water Boy" and it used to stand in front of the grand staircase. Jim said that it was considered good luck to rub his toe before an exam. (He did it once as an "experiment.")

Bartholdi is better known for designing the Statue of Liberty.

This bronze dates from 1869 and came to the US in 1876 as part of the Centennial Exposition in Philadelphia. 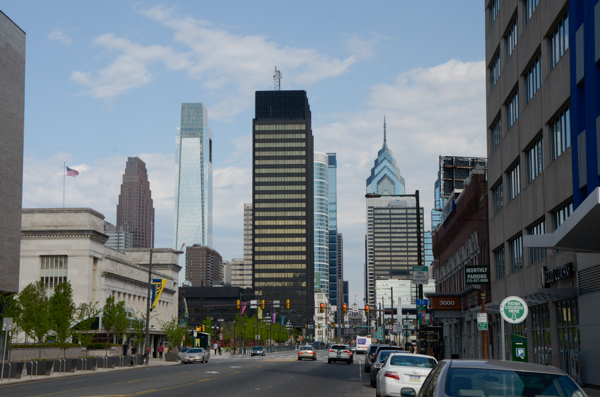 After our brief visit we walked over to Market Street and headed back to the hotel. Philadelphia has a lovely skyline.

Jim lamented the passing of his favorite railroad bar that was demolished for a new Drexel building. I had been able to visit the bar once as we traveled through 30th Street Station (in the foreground on the left) on the way to Pottstown. 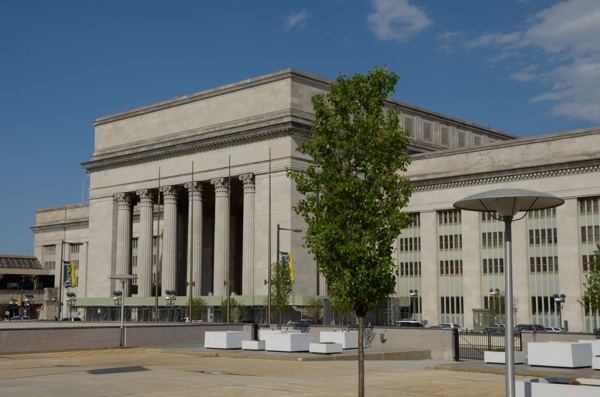 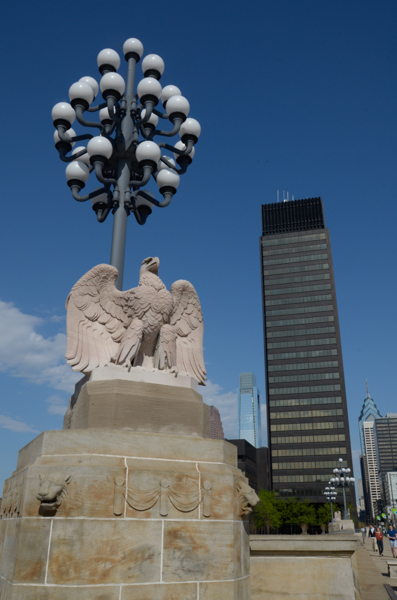 The Market Street Bridge over the Schuylkill River opposite 30th Street Station was constructed in 1932. The first permanent bridge at this site was built in 1805. Prior to that time a ferry and several pontoon bridges had been used at the same location.

The four eagles on the bridge were salvaged when New York's Pennsylvania Station was demolished in 1963. They were donated to Philadelphia by the Pennsylvania Railroad. At least something was saved from that beautiful station!

The bridge was cleaned and enhanced in 2009. 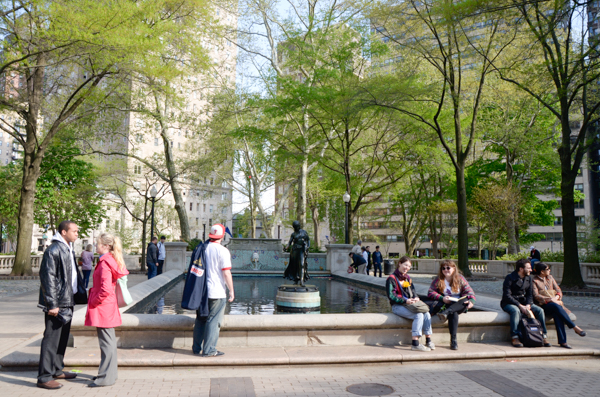 On our way back to the hotel we detoured to Rittenhouse Square. This lovely park is one of the four remaining open spaces mandated by William Penn in his original specifications for Philadelphia (City Hall now occupies the fifth one). It was named for the astronomer and clock-maker David Rittenhouse.

It has been designated one of the top public spaces in the US and has certainly been filled with people of all ages and conditions on the times that we have visited.

This is a close-up of the fountain feeding the reflecting pool pictured above. It was designed in the early 20th century by Paul Philippe Cret, a design professor at the University of Pennsylvania. 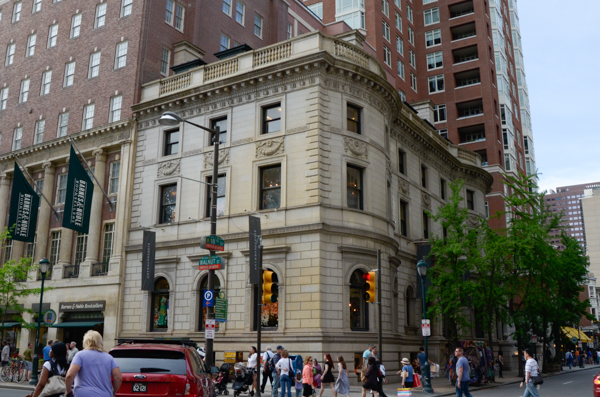 The former townhouse of Sarah Drexel Van Rensselaer, the daughter of Drexel's founder.

Most of the elite townhouses around the square were demolished in the mid-twentieth century to build high-rise apartments. This is one of two or three that remain. It's been turned into a store.

Join us for our next day when we visited Eastern State Penitentiary.