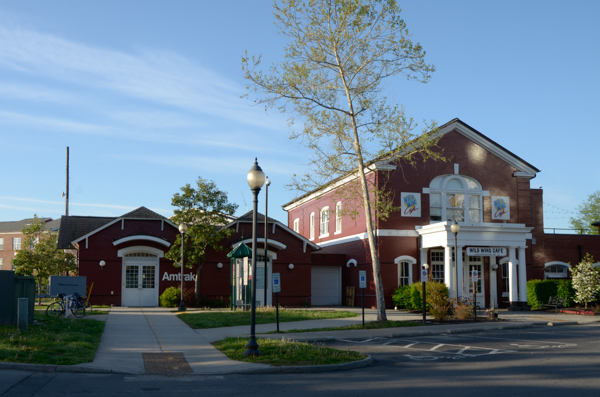 Charlottesville's old RR station is still staffed and in daily use. There is ample parking and a restaurant in a portion of the station.

We decided to spend the night before in Charlottesville to avoid an early morning trip over Afton Mountain. Even so the folks at our hotel advised us to allow a significant amount of time to get to the station through rush hour traffic. We left early enough that we beat the traffic.

While we waited, the Crescent, which was traveling from New Orleans to NYC, came through. Our own train, one of the Northeast Regional trains, wasn't due until later.

The Crescent was running about 20 minutes late, but our train, which started in Lynchburg, was right on time. Since we were the first stop for this train on its northward journey, it was mostly empty when we got on. By the time we arrived in Philadelphia it was pretty full.

It turned out that another couple in our program took the Crescent all the way from Meridian, MS. Their travel was a couple of days later.

We arrived in Philadelphia at 30th Street station after a pleasant trip of about five hours. We were delighted with our accommodations in a Club Quarters Hotel in the centrally located area near Rittenhouse Square. It is within walking distance to almost everything and has easy access via public transit to everything else.

The hotel is located in a former bank. The lobby is on the second floor in the shorter section to the left in the photo. It has a lovely skylight. The rooms are located in the tower.

The penthouse all the way at the top is the space where our lectures were held.

Our first day's outing took us on three SEPTA (Southeastern Pennsylvania Transportation Authority) rail lines: the Market-Frankford subway line to the 69th Street Terminal where we caught the Norristown High-Speed Line to Norristown and then the Regional Rail system from Norristown to Manayunk and then from Manayunk to Suburban Station located near the hotel.

We were surprised and delighted to learn that seniors ride free on SEPTA. We did have to pay $1 apiece for the Regional Rail service, however. 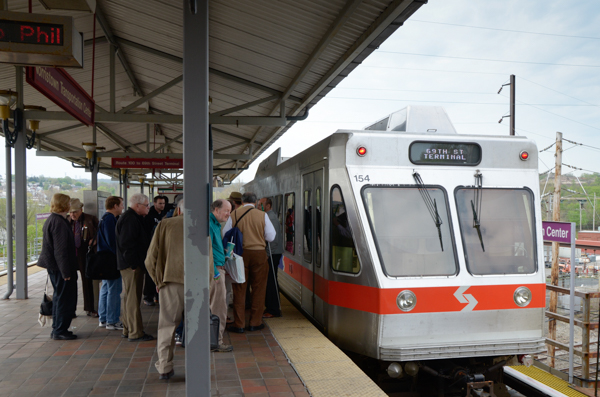 Jim had told me many stories of driving with his mom and sister from their home in Pottstown to Norristown where they would take the Philadelphia & Western cars into Philadelphia for shopping or cultural events.

Jim always called this line the "Poor and Weary" but it was apparently known for high-speed service and is still called the "Norristown High-Speed Line." He said that one of his delights as a child was being allowed to sit alongside the engineer.

The P&W station was high above the SEPTA Regional Rail station at the "Norristown Transportation Center." We walked down to catch the train to Manayunk. 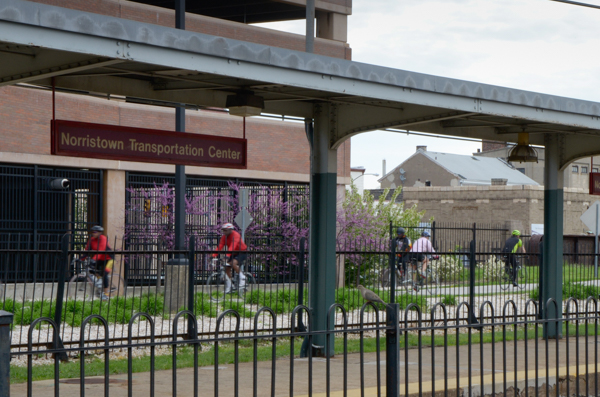 The Schuylkill River Trail bike path was getting heavy use on this lovely Saturday morning. We later saw the couple headed to the right in this picture at Manayunk. It took them considerably longer to get there than it took us. At present the trail runs from Philadelphia to Valley Forge, and it is planned to run over 140 miles along the Schuylkill (pronounced SKOO-kul) when complete. (The suffix "kill" is Dutch for river or stream. Calling it the Schuylkill River is technically redundant!)

Part of the original P&W system has been abandoned and also turned into bike/walking trails. 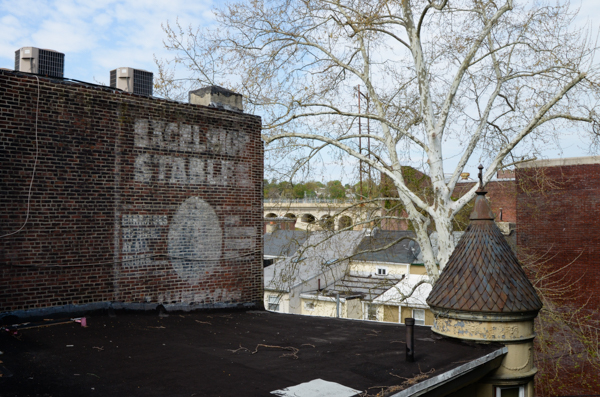 We were greeted in Manayunk by this old ad for the Excelsior Stable which offered "carriages to hire at all hours."

It wasn't clear if this was the actual building that housed the old stable. Maybe.

I had been intrigued by Manayunk as we passed by it all those years on the other side of the river. It just looked interesting. Turns out it is.

As we walked from the station toward the river we passed this exercise boot camp. The "drill sergeant," on the left in the grey shirt, was keeping close watch on the progress of his troop. Occasionally one would desert his or her post and take off running down the boardwalk.

By the time we strolled along the river and back up, the drill sergeant, his troop and all the equipment had vanished. 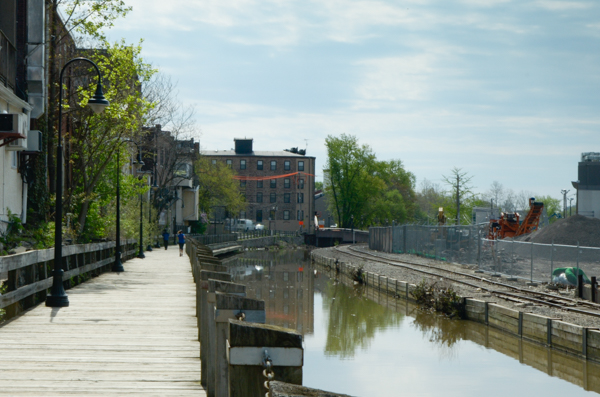 The river trail through Manayunk proper ran on this boardwalk along the old canal towpath. The warehouses and factories along the canal are being converted into shops and housing. 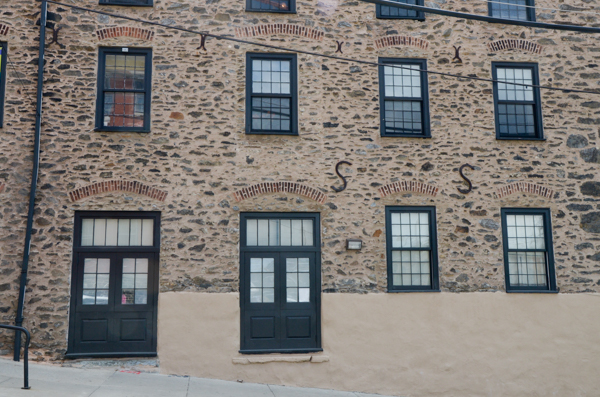 This lovely old building, which can be seen in the distance in the picture above, is really cleaning up nicely. 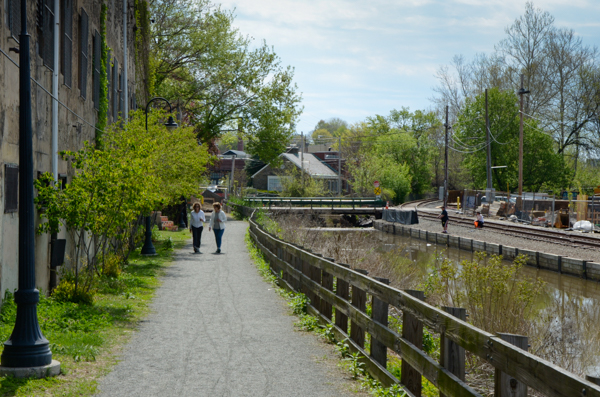 The recent heavy rains and subsequent flooding had closed part of the trail. We had ignored "closed" signs to get to this section of the towpath, but had to turn around before the bridge shown in the picture.

We ran into the two ladies several times. They appeared to be identical twins. 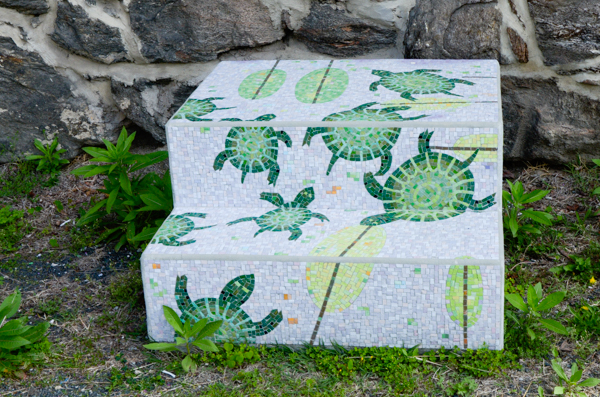 All long the towpath in Manayunk were art installations. Most of them were like this one: mosaic steps with different colors, designs and configurations. 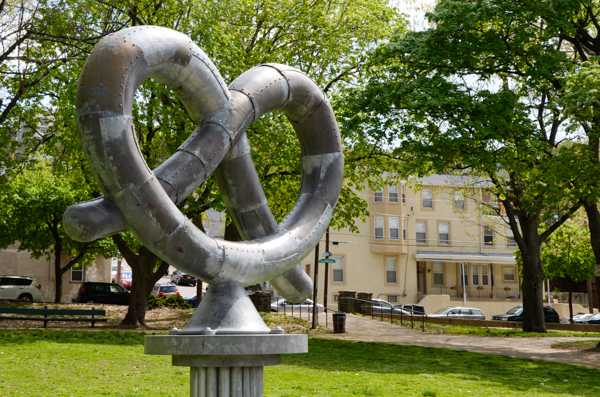 After walking along the canal, we climbed up above Main Street and past the railroad to see what we could see. We found this lovely little park that we discovered was called Pretzel Park. Lest there be any doubt, this pretzel sculpture was prominently located.

We asked a local resident where the name came from and she pointed out that the park paths were shaped like a pretzel. Now that you mention it ... they are! 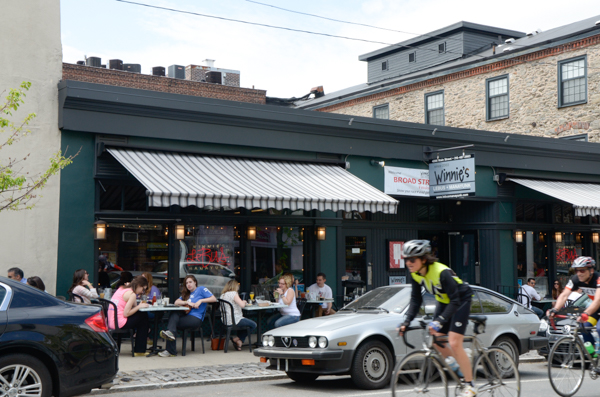 It was now getting to be lunchtime. Jim had researched a highly-recommended brewpub, but it turned out to be closed on account of the flooding in the lower part of the town.

So we ate at this popular cafe named Winnie's. The food was good and Jim said the beer was too. The business was originally known as "Le Bus" because it operated out of a bus before settling in Manayunk. One of the current owners is named Winnie, hence the new name. 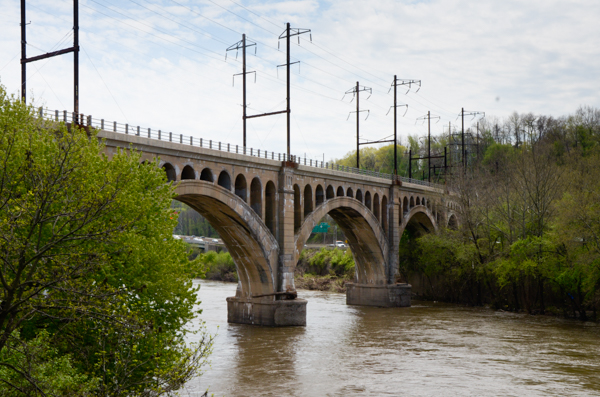 After lunch we walked up Main Street to the two bridges over the river.

The Manayunk RR Bridge, built in 1918 and decommissioned by SEPTA in 1986, is slated for a rails to trails conversion. 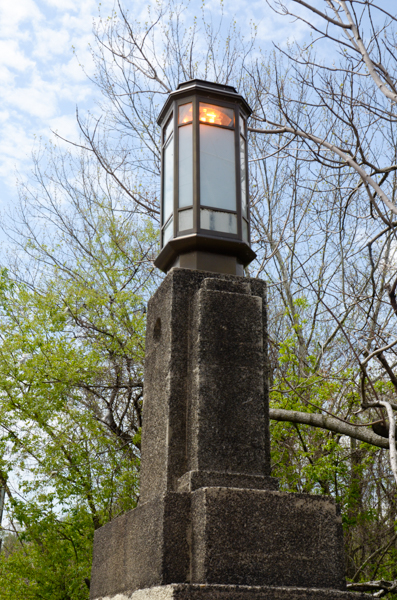 The nearby Green Lane auto bridge retains many of its striking Art Deco features in spite of significant deterioration in the concrete of the superstructure. It was built in the late 1920s.

It began to be time to head back to the hotel, but as we passed the location of the morning boot camp, we found that this pair of musicians had set up and were beginning to play. 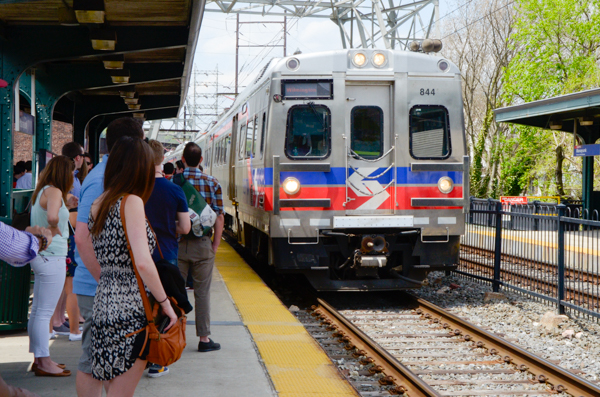 We caught the regional rail along with a large contingent of other passengers. Either there was some event going on downtown or it's just the happening place to be on a Saturday afternoon, but the train was jammed. We didn't even have to pay our $1 senior fare because the conductor just couldn't get to everyone.

Check out some additional Manayunk street art below, or come join us on day two of our adventures (or both). 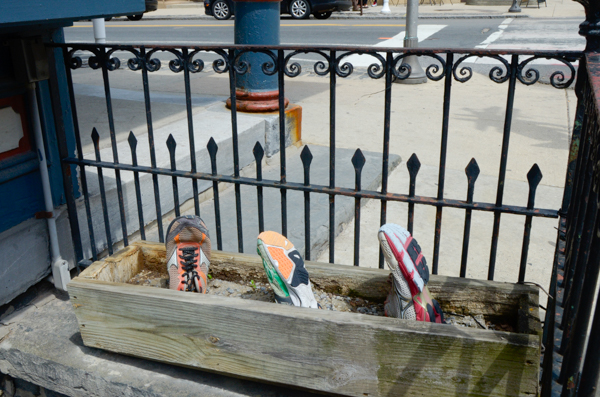 Jim says that the tradition of slinging sneakers over the telephone wires as a high-school graduation celebration started in Manayunk. It looks like this citizen is hoping for a good harvest for the next celebration. 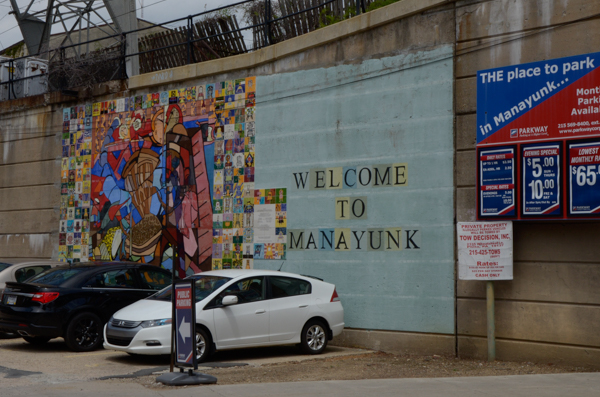 We found out later that murals are a supported Philadelphia art form. There are said to be over 3,000 murals within the city. Manayunk has certainly contributed its share. 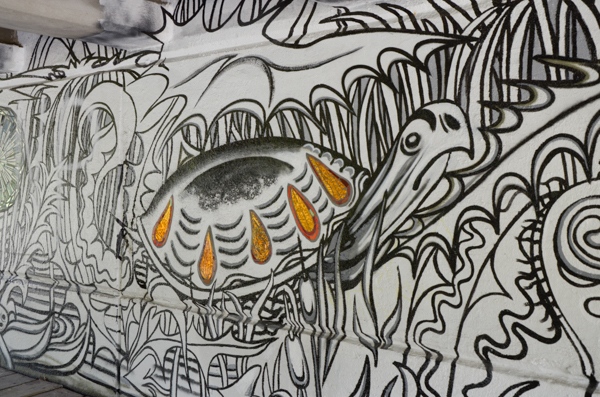 This nature scene was under the Green Lane bridge across the Schuylkill. I couldn't quite get the light such that the reflective surfaces stood out as much in the photograph as in person. 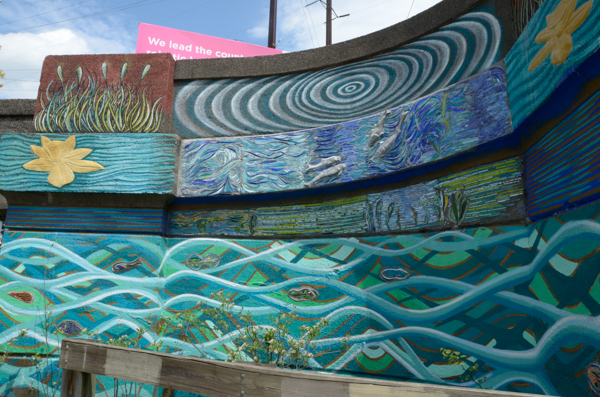 This more elaborate installation was along the towpath on the west side of the bridge.

I don't think the irony of this juxtaposition at a tavern beside the tracks was intentional, but I found it amusing. I wonder if ladies are still required to come in by the side door, or if they can now enter with the rest of their buds.