Originally we had planned our Florida trip for February to coincide with my niece Anne's anticipated wedding. As it happens, however, Anne and her husband, when faced with the cost and hassle of a wedding, made the sensible decision to elope. Therefore delayed the trip a bit.

A prime goal of the trip was still to meet Anne's new husband. Our first night we all got together for dinner. 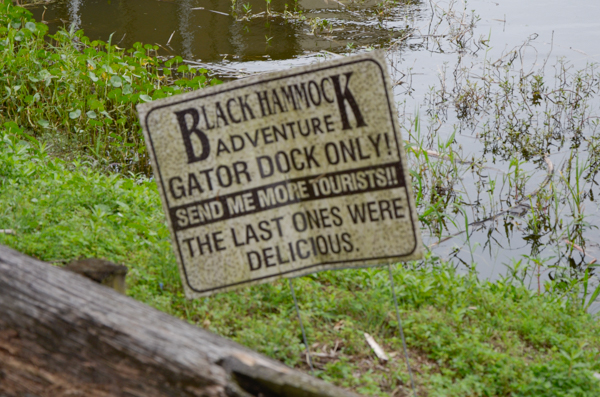 One day we scheduled an airboat ride on Lake Jesup. Black Hammock Adventures provided an informative tour along the margins of the lake. We got to see a variety of wildlife. 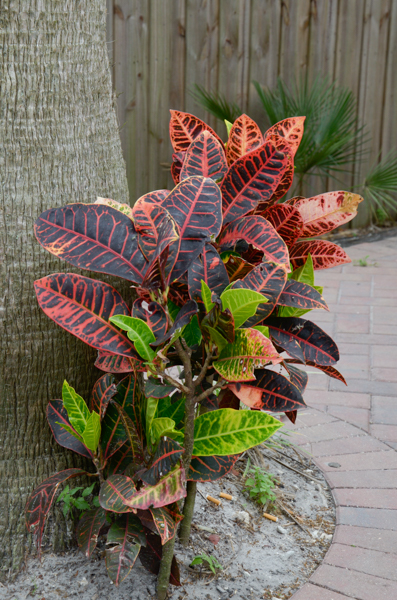 My friends Anne & Alan Green gave me a croton around 1976 after a trip they had taken to Florida. Around 1993 I rooted two cuttings from the mother plant, which died a couple of years later. The first cutting died in 2012 from an infestation of mealy bugs. The second succumbed in 2013.

Even though it had lived a potted life, it was much larger than this one. This picture will have to serve as a memorial.

In addition to plant life, there were numerous juvenile alligators around the docks. At first I thought they were props to complement the sign above, but it later became clear that they could move (quickly!) and were in fact alive. 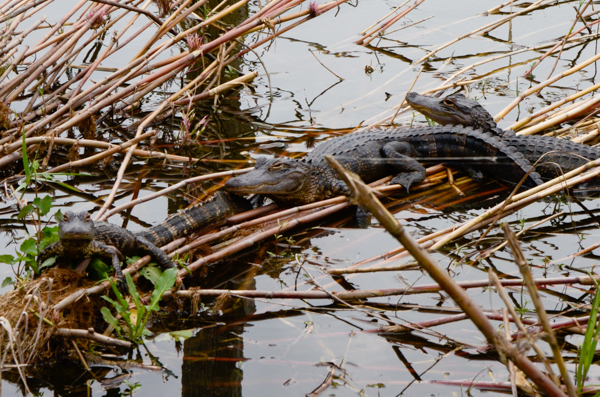 One of this trio still retains its baby yellow banding.

At one time the alligator was listed as endangered due to over-hunting, but the population has recovered. Nevertheless it is retained on the Endangered Species List as "threatened due to similarity of appearance." The intent of this is to prevent mistaken killing of look-alike species such as the crocodile and caiman, which are still in trouble.

When I was a child, a baby alligator was a common souvenir of a Florida vacation! I had friends who kept them for a while in bathtub. When they grew too large, my friends released them at their grandmother's pond where many survived. 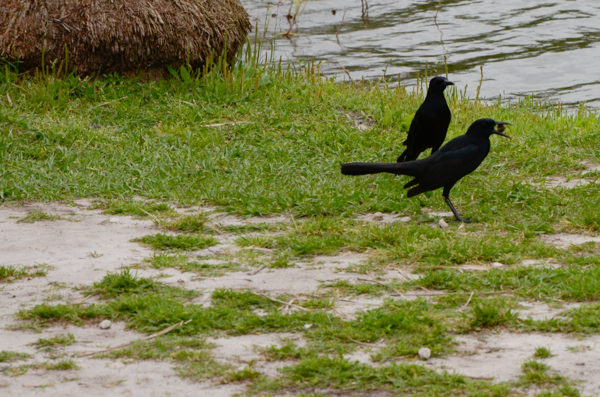 The common grackle is a very, um, common bird in the area. This one had more than a mouthful. I'm not sure what he (or she) was planning to do with it. 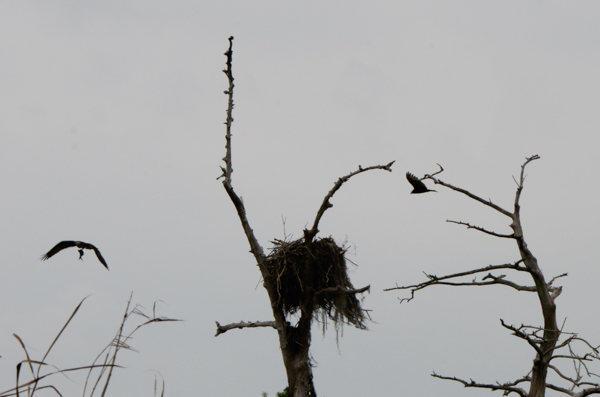 This osprey nest was adjacent to the slough where the dock is located. The bird on the left is returning with a fish in its talons. The other bird was making attempts to steal the fish, but never succeeded.

While at Grace's we got the opportunity to see an osprey make a dive to catch a fish. He went away empty-taloned, but it was an impressive attempt! 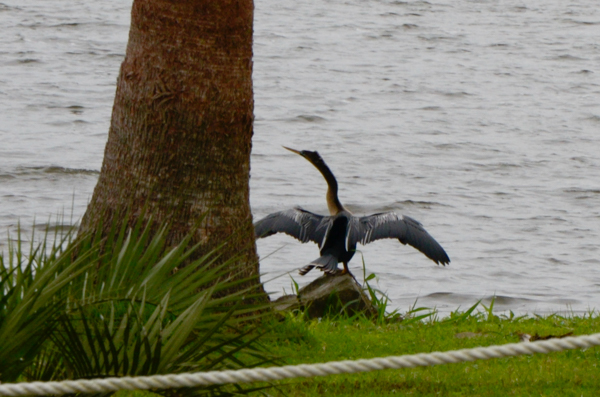 At the end of the dock area an anhinga was drying its wings. These birds "fly" underwater hunting for food. Their feathers lack oil, which reduces their buoyancy making it easier for them to stay underwater. As a result they need to dry the feathers after a dive. Almost all the ones that we saw had their wings "hung out to dry" like this one. 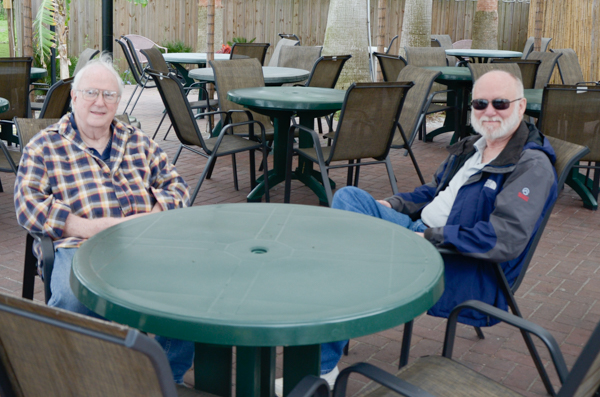 While I was prowling around getting pictures, Emmett and Jim waited patiently for the departure time. We just missed the previous boat. At first it looked like we might be the only customers for the next one, but by the time we left our boat was almost full. 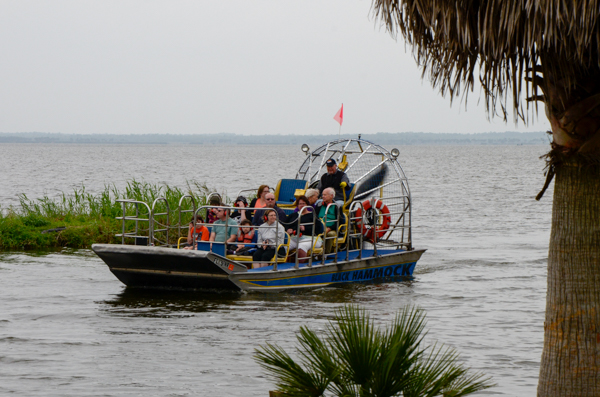 The airboat finally returned. These flat-bottomed boats with no underwater propellers can go just about anywhere in these shallow lakes and swamps.

They are deafening at full throttle and the operators issued ear protectors. After cruising slowly along one bank of the lake, our captain opened it up to cross over to the other side. These boats can fly! Children were positioned in the center of the boat between adults to prevent any being bounced overboard 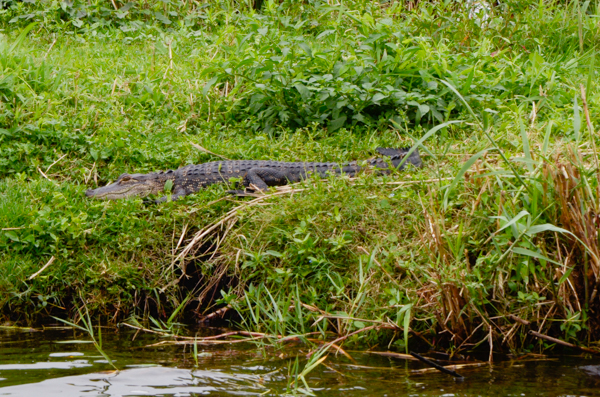 We saw numerous alligators along the banks and in the water. Our captain estimated this one at about five years old. He said that siblings of the same hatching hang out together for their first few years. 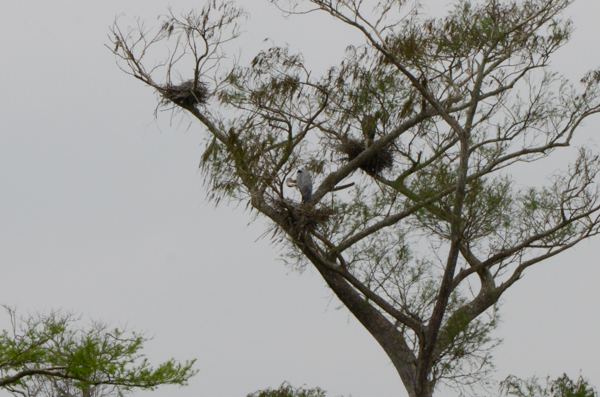 These are the nests of great blue herons. The two right-most nests have birds occupying them. They nest in groups. 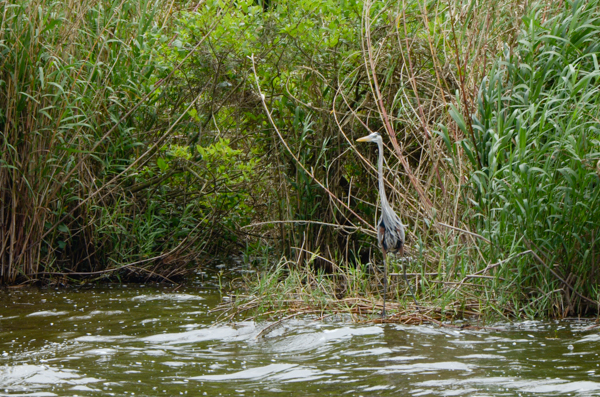 This heron is irritated that we are interrupting his fishing!

I notice that the map at the link doesn't show that bald eagles have made it west to the Lexington area in Virginia, but there was a breeding pair along the Maury River a few years ago. They successfully raised their offspring. There have been numerous other sightings locally (none by me, alas).

This green heron kept an eye on us for a while, but eventually flew away as we passed. 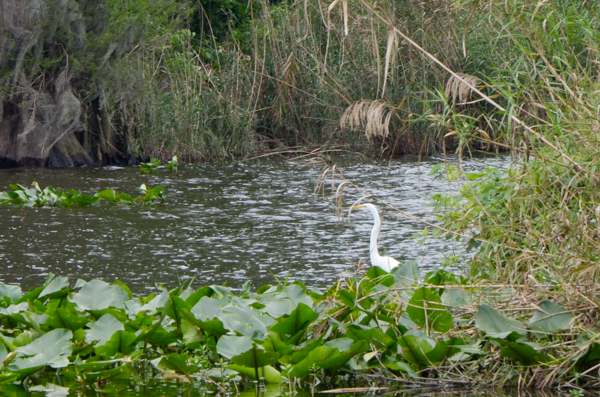 An egret watched from the shallows. The yellow bill identifies it as a great egret. We did see snowy egret with their bright orange feet, but I didn't get any pictures.

This picture really shows the kind of shallow sloughs with plentiful vegetation that is accessible in the airboat.

At the current slow speed it doesn't even make much noise. Many of the birds were undisturbed by our visit. 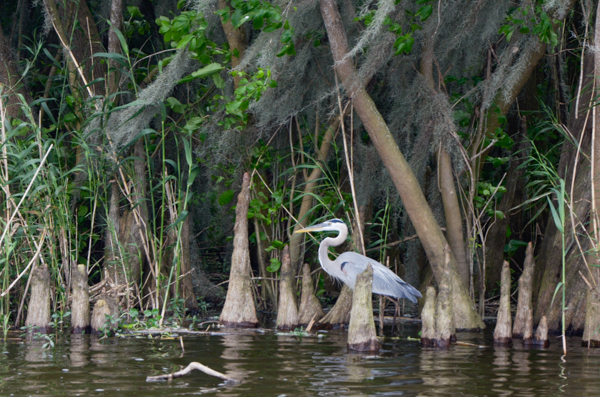 This blue heron is lurking among the cypress knees. I was always told that the knees were a mechanism for capturing oxygen in a waterlogged environment, but recent research has cast doubt on that explanation (and many others). Click the link to read a discussion of knees and their function, if any. 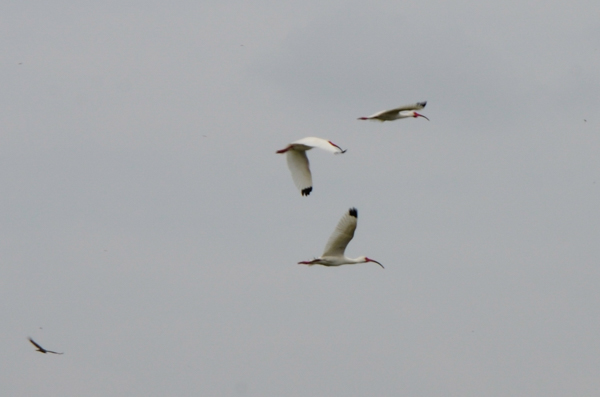 Shortly after the above picture we headed to the other side of the lake. Our captain told us to put on our ear protection and hang on to our hats. (He had been concerned about my straw hat until I showed him the under-chin strings. Even so I had to hang on to it as we flew across the lake!)

The birdlife on the opposite side was rather different.

White ibis are everywhere in Florida. 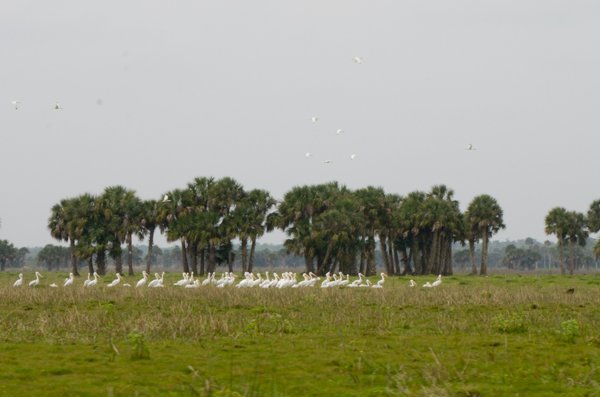 White pelicans are winter residents of Florida. Until I read the information at the link i was not aware that their breeding grounds are in the plains and mountain states, north into Canada.

These birds are located in an active cow pasture. We saw cattle grazing elsewhere in this pasture, which came right up to the water's edge. 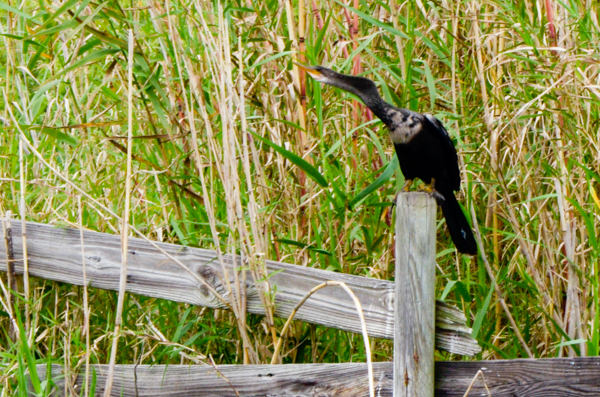 This is the closest we could get to an anhinga. They have a peculiar snaky neck. 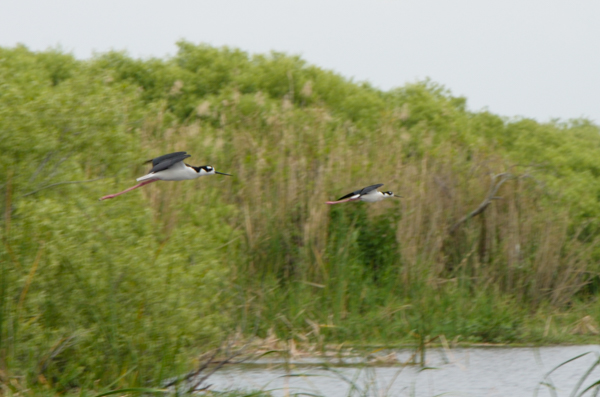 These are black-necked stilt. 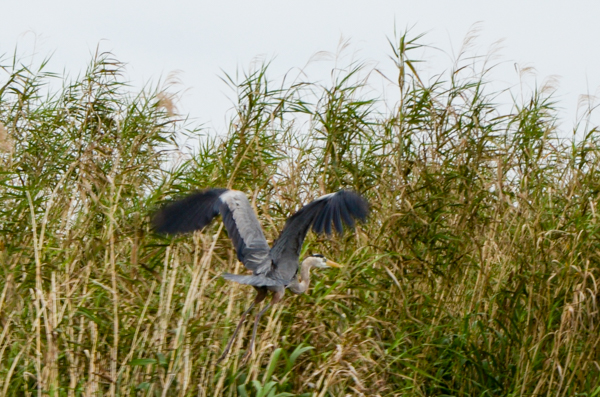 After leaving the far shore of the lake we returned and passed by Bird Island. Tall grasses and reeds grow right to the water's edge. I could see dozens of birds behind the veil of vegetation, but this heron was the only one that was out in the open.

We have great blue herons in Virginia, but somehow they just don't seem so large!

Grace has one living in the pond behind their house. She calls him "Mr. Nasty" because he is so aggressive toward other birds. 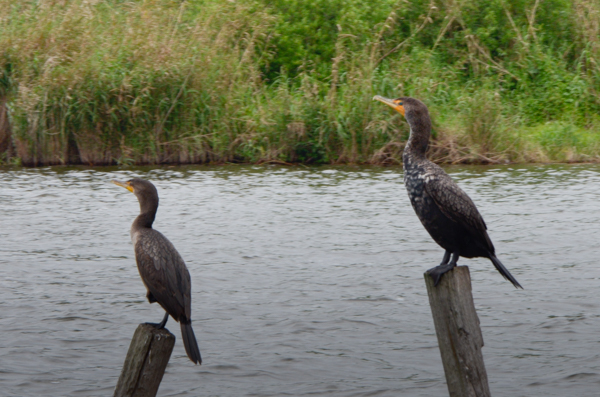 These are juvenile double-crested cormorants resting outside the docking area. Like the anhinga they are diving birds that need to dry their wings. Earlier we had seen cormorants with their wings spread. These will become blacker with age.

In China cormorants (not the same species) are domesticated and used for fishing. 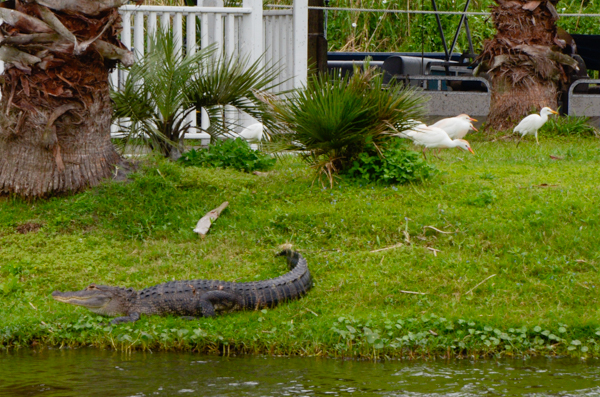 As we returned to the dock, we passed this alligator and a collection of cattle egrets. These birds are not native to North America, but they were certainly numerous in this neighborhood. 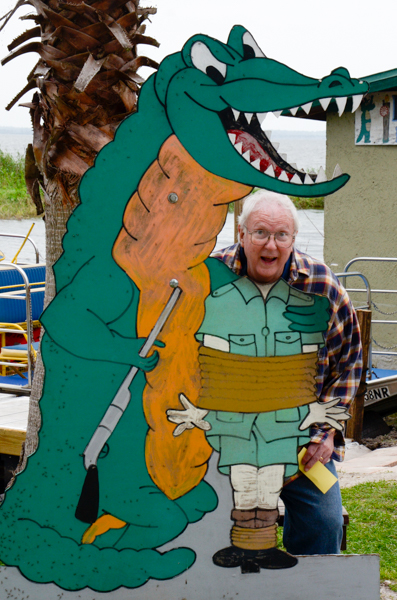 Having arrived back safe from our lake adventure, My brother was seized by this voracious gator. Alas, poor Emmett!

We had more fun times visiting with my brother and his family, but I didn't take my camera along.

On Wednesday morning we were off to The Villages to visit Jim's sister Grace and her husband Steve.