On the Silk Road in Central Asia
Uzbekistan – Tashkent

Over half of our trip was spent in Uzbekistan. After spending a night in Tajikistan, the first order on the agenda was getting back into the country. The evening before leaving Tajikistan we had another tutorial on filling out customs declarations. Jama gave us new warnings about how to describe medications should we be asked. Since Tajikistan adjoins Afghanistan and the Uzbek government believes it to be complicit in illegal drug traffic, the border authorities are very interested in medications. We were admonished never to call anything "drugs." Use "medicine" or, even better, "vitamins." Drug smugglers sometimes recruit the elderly by threatening their children or grandchildren, so our grey hairs were no protection.

Border agents were also interested in CDs. A traveler from the Fergana valley had entered Uzbekistan with a US passport and was later apprehended distributing CDs with radical Islamist propaganda. The authorities were now suspicious of CDs, and US passports were no protection. (We heard this after many of us had purchased CDs containing traditional music from one of the folkloric shows.) We were again reminded to be sure we hadn't lost the hotel registration from our previous one-night stay. We surrendered all hope of getting back into Uzbekistan, but the actual crossing was uneventful, other than the time it consumed.

One of Jim's favorite stories concerned this border crossing. He was traveling with a flask of Jack Daniels that immediately aroused the suspicions of the agent. She demanded to know its contents. Replies of "whiskey" and "bourbon" didn't make an impression, but she immediately recognized "Jack Daniels," smiled, and waved him through.

While waiting to be processed, we watched a semi pass through. Trained drug-searching dogs gave the trailer a thorough once-over, but when the dogs attempted to jump into the cab of the truck they were rebuffed. The border guards didn't press the matter. We decided that were we smuggling drugs we'd put them in the cab of a semi rather than co-opt elderly American travellers.

Our next stop was the capital, Tashkent. A massive earthquake destroyed much of the city in the 1960s, so there were few ancient structures left. Volunteers from all over the Soviet Union came to reconstruct the city using the notoriously ugly pre-fabricated high-rise concrete apartment blocks. Our tour guide in Tashkent was the first, but not the last, who expressed nostalgia for the Soviet Union. The connection to a larger reality, typified by the readiness of strangers to come to the aid of Tashkent after this emergency, was the source of great nostalgia. She viewed "independence" as disconnection. "You think of Gorbachev as a hero," she said. "We view him as a traitor." 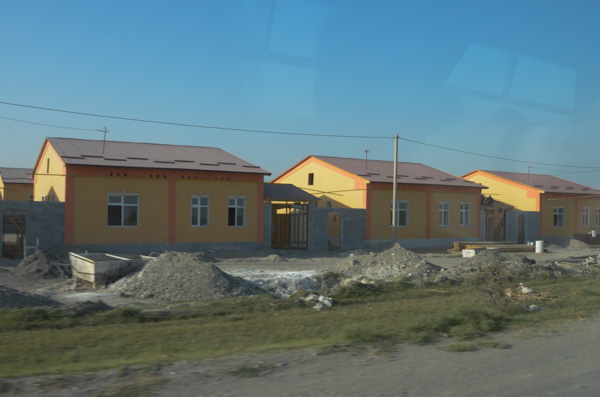 Throughout our travels in Uzbekistan we saw new homes under construction. Jama said that the government had a program to improve the living conditions for residents and home construction was part of it.

Many of the new houses replaced older homes torn down to allow wider streets and highways. 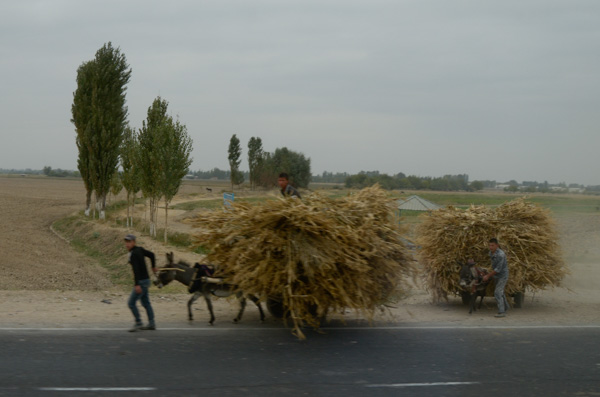 Another common sight was farm workers using donkeys or horses for transportation or hauling. 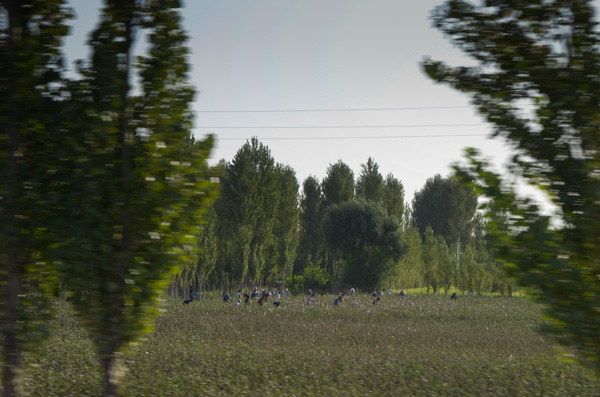 Perhaps the most common sight, however, was workers in the cotton fields. This is a fraught subject. Human Rights Watch & the UN have Uzbekistan in the cross-hairs for human rights abuses. High on the list is forced conscription and child labor in the cotton harvest.

Jama stoutly denied the use of child labor and downplayed the "forced" characterization. Yes, it happens that students and others are conscripted to help with the time-critical harvest, but he said exceptions are available and moreover it is a jolly good time of camaraderie. Maybe.

Regardless the government prohibits tour buses from stopping to take pictures of the cotton workers. Both Jama and the driver could lose their licenses if they were caught. This picture was taken as we whizzed by at high speed. 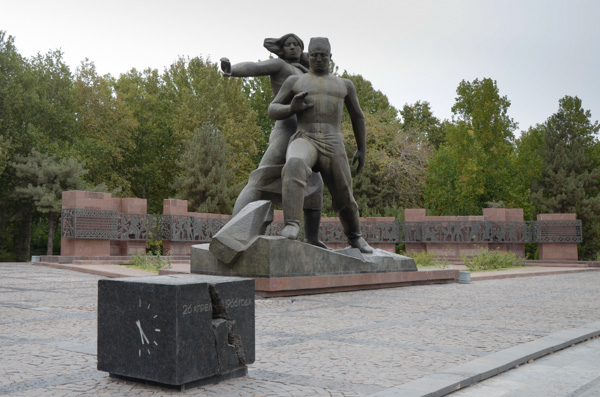 The first stop on our Tashkent city tour was this monument commemorating the earthquake.

The fractured cube in the foreground contains the date, 26 April 1966, and time 5:22, of the initial shock. Between the cube and the sculpture of the family the pavement is "buckled."

There was, of course, a wedding party taking pictures. We saw this at most, if not all, of the monuments we visited. 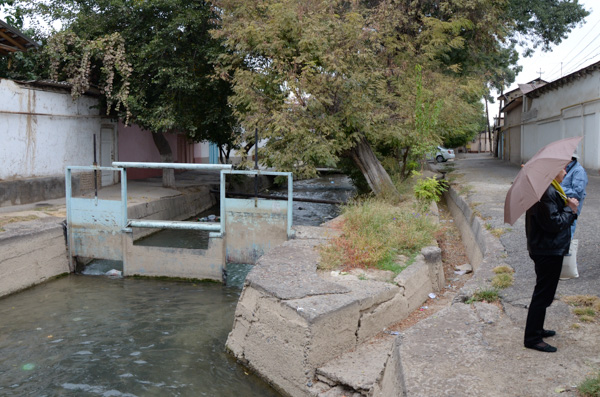 All cities in Central Asia grew up around water. Tashkent is located near the Syr Darya river and has many canals running through the city.

This one is in the old part of town, much of which was reconstructed after the earthquake. Some may be original.

The deep concrete ditch behind our local guide, holding the umbrella, typified the gutters we found in the Central Asian cities. (This drizzle was the only rain of the trip.) We were often warned to watch our step either because of broken pavement or these deep gutters. 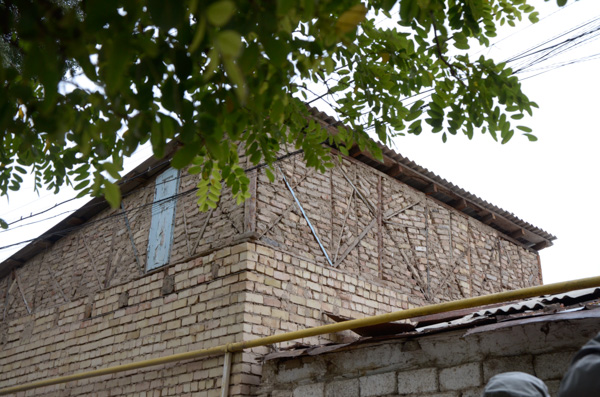 Most of the older buildings in this earthquake-prone region were built of masonry, which is not a great building material in seismic areas. Some of the construction details as shown here, however, take into account the potential for earthquakes.

The corrugated metal roofs, which we saw everywhere, are light weight unlike tile roofs. They are less likely to rain down debris in a quake.

The wooden cross-bracing is likewise engineered to provide stability. 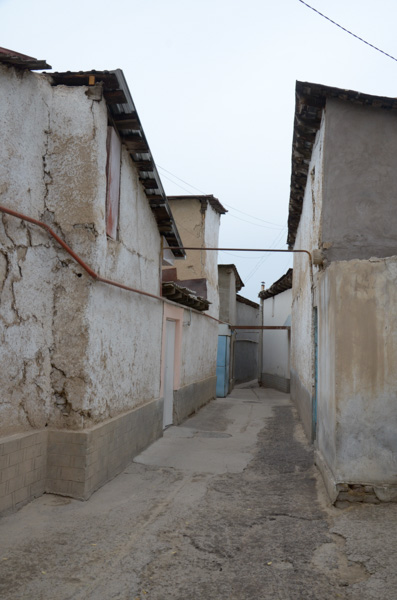 The streets in this old town section look dreary, but Jama said this was intentional. It was true everywhere we went in Uzbekistan. During Soviet times it wasn't wise to have a dwelling that looked opulent. The exteriors of the houses lack windows and nice entryways. All comfort and luxury is inside and out of sight.

We saw similar construction in the Morocco medinas.

Throughout our travels it was difficult to know what was original and what was reconstructed or restored. It is safe to assume that very little is original. 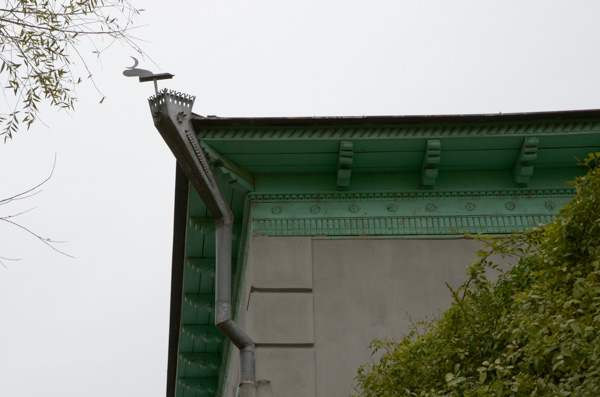 Some buildings had elaborate details, such as this soffit and downspout. 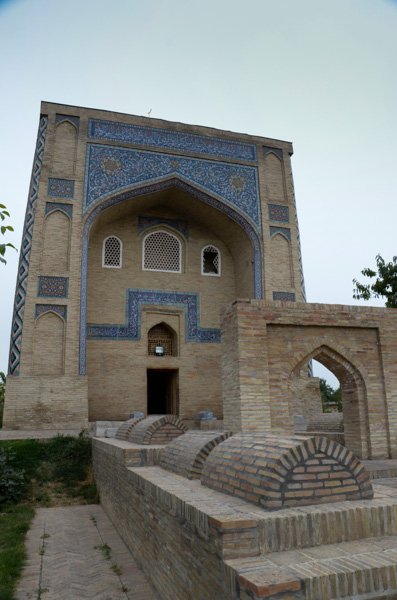 Another stop on our walking tour of old Tashkent was the Mausoleum of Yunus Khan.

The high entrance portal hides the dome behind.

I don't recall if the cenotaphs leading into the mausoleum also commemorated members of this distinguished family. 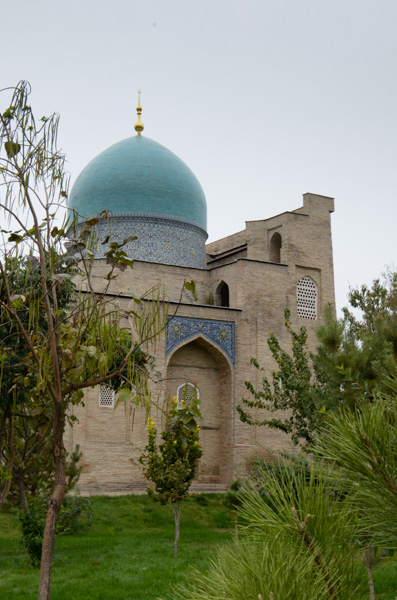 The view from behind the facade. 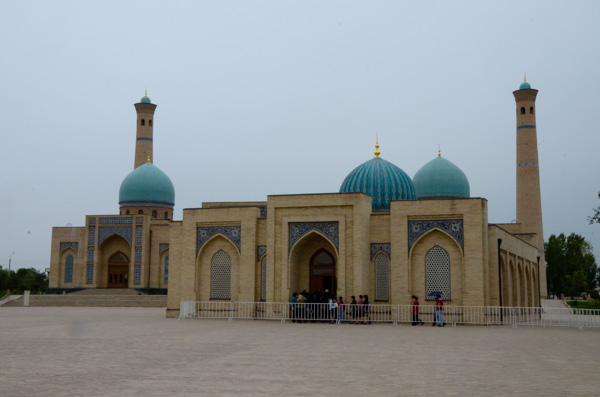 Our next stop was the nearby Hast Imam complex. The library, in the foreground, houses the oldest known Quran, known as the Othman Quran. It is believed to have been written in the 7th century, although this isn't without controversy. No pictures were allowed inside, of course, but an image at the link will show a sample of the script. There are many other old and unusual books housed in the library. (On a later trip to the Gulf States, we saw other Quran's also claimed to be the oldest.)

The ancient book is huge with pages made from the skin of gazelles. Later in Samarkand we saw a large stone structure: the "book rest" where it was displayed in ancient times. 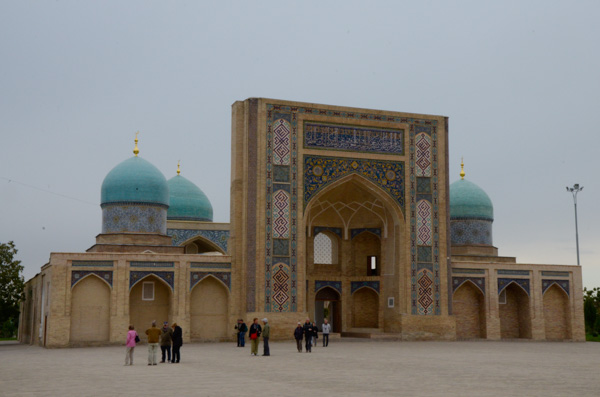 This is the structure opposite the library above.

The "crowds" were pretty typical of many of the places we visited. These folks were all in our group. 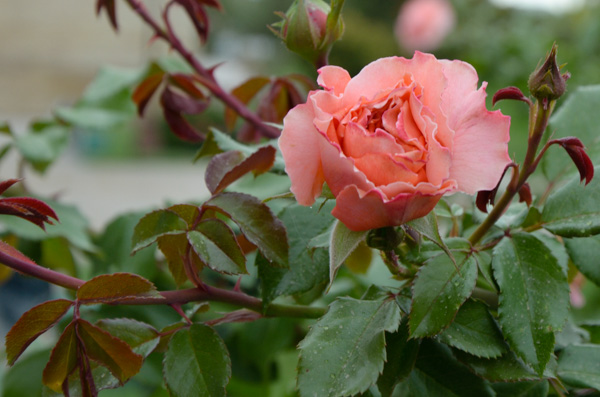 Roses were everywhere we went throughout Central Asia. I am limiting myself to this one picture. A feature of most of the roses that we saw was their scent. I've gotten used to sad scentless roses in the US, but almost all the Central Asian roses were lovely in looks and also perfumed. 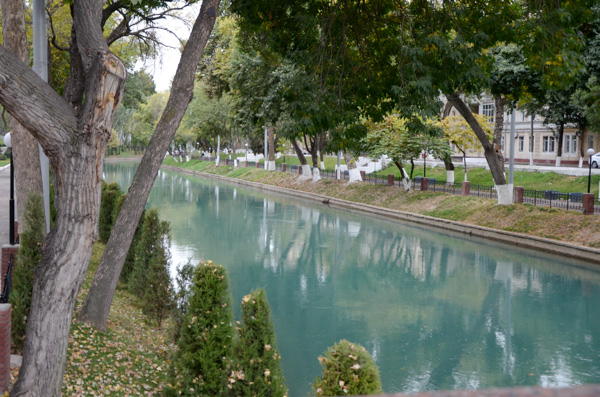 This canal in the downtown section of Tashkent is rather more scenic than the one in the old town.

We stayed at a modern hotel. The (many) hotels where we stayed were comfortable albeit a bit eccentric. We don't mind climbing stairs, but some folks did and not every hotel had an elevator. The one here in Tashkent was the closest approach to a modern European or US business hotel. 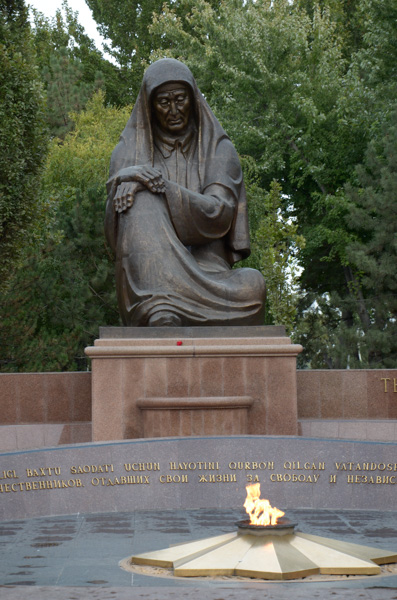 The war memorial's eternal flame commemorates the more than 400K Uzbek soldiers killed in WWII. The sculpture represents a grieving mother. To put this loss into context, is it almost as many deaths as experienced by the US in WWII out of a far larger population. Jama said the reason we saw so many wedding pictures at war memorials is that almost every Uzbek family had been touched.

Pavilions with large "books" containing bronze "pages" listing the names of the soldiers who died in the war circled the park. WWII fighting didn't reach this area, but Uzbekistan contributed many soldiers to the Soviet armies. 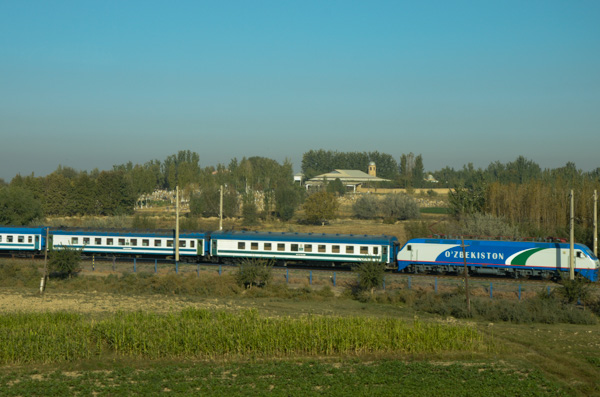 The next day we were on the road to Samarkand.

It would have been nice if we could have used the train for some of our journeys, but Jama pointed out a major limitation: no one can carry luggage onto the train. Oops! Moreover the schedules weren't compatible with our needs.

Nevertheless the trains are very popular with the local people. 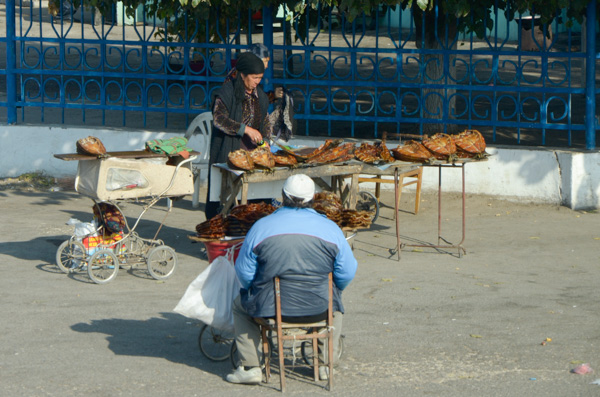 One of the stops on our way was at this roadside market. There were many different items on offer and also a large tea room. This vendor was selling dried fish. Brackish lakes in the area support a small fishery.

The "baby buggy" cart was a kind we often saw at the markets. Lightweight, collapsible, functional. 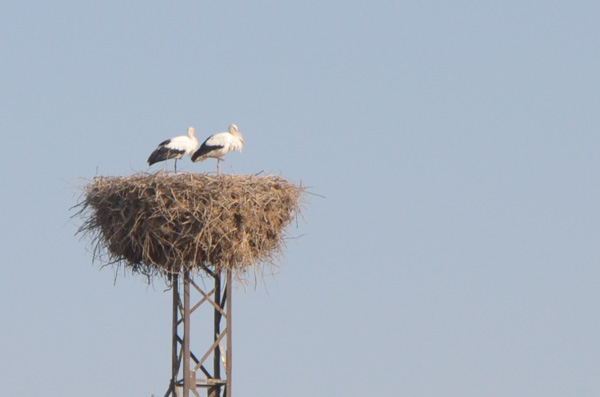 We passed a number of stork nests along the road, but this was the only one that was inhabited. Birds were migrating back now that the scorching summer was over.