The Lost Gardens of Heligan

The weather became stormy after our departure from Portsmouth, which made for a rough ride overnight. We were glad to pull into the sheltered harbor the next morning. The wind and rain continued but didn't discourage us from seeing the gardens.

Jim had visited Heligan the previous fall when we were on a hiking tour of Cornwall. He was enthusiastic both about what he saw and the story behind the gardens. The gardens had been the pet project of the Tremayne family for almost two hundred years, but they deteriorated after many of the gardeners failed to return from WWI. The owner moved to Italy and leased the manor. By the 1950s the gardens had been abandoned. Not long afterwards the manor was divided into condominiums and sold. In the 1990s, however, the gardens were rediscovered and restored. Many of the older plantings survived and the meticulous records allowed others to be recreated. When Jim noticed that this program included a visit to Heligan, he was sold!

The town of Fowey ("foy") clusters on both sides of the Fowey River. One of the excursions visited the town itself, which had been the home of writer Daphne du Maurier. In fact the 2013 Fowey Festival of Words and Music was on at the time of our visit. 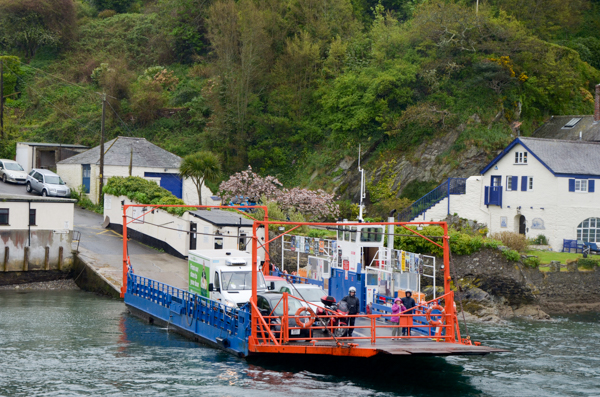 This ferry takes traffic across the river. It waited patiently for our ship to pass before making its run.

The benefit of a small ship is that it can work its way into anchorages that are inaccessible to a larger one. Even so the pier where we tied up was in an industrial area so that we needed to take Zodiacs into town to catch our bus.

In spite of instructions, many people had not brought along waterproof clothing. They had a damp ride on the river in the rain! 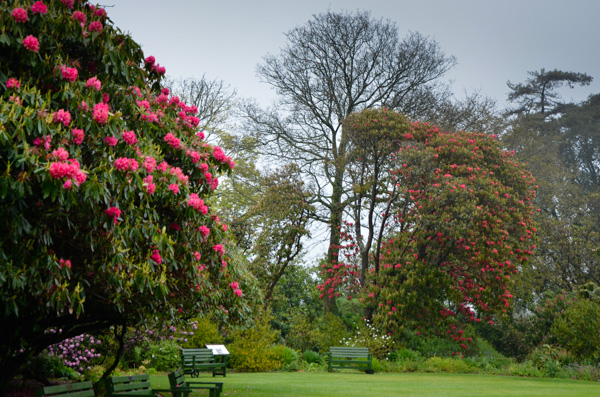 The morning was dedicated to a lecture by our traveling Stanford professor Linda Paulson on Pride and Prejudice. We were also to have heard a presentation on the restoration of the Heligan gardens, but the rough weather overnight had delayed our arrival, so it was postponed until the garden tour itself.

After lunch a short bus ride brought us to the gardens. They were as magnificent as Jim had promised – even with the stormy weather.

The gardens are noted for their huge 150-year-old rhododendrons.

Our guide took us "inside" one of the rhododendron stands. At the time the restoration began this area was completely grown up with weeds and trash trees.

It's amazing so many of the plants survived.

Himalayan rhododendrons were much more successful in the English gardens than the North American natives. One of the folks on the trip insisted that ALL rhododendrons are native to Asia. But no, we Virginians are very proud of our natives. 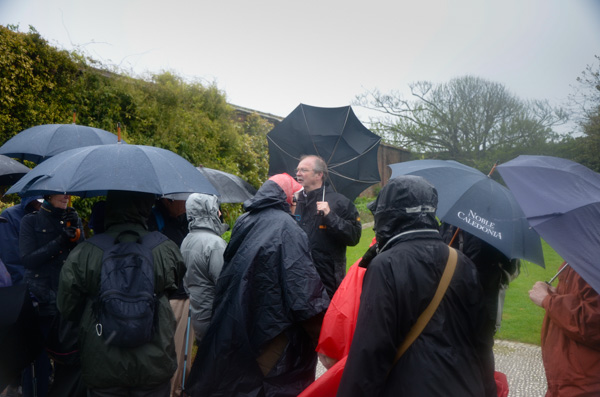 As the day progressed the storm worsened, but our intrepid band didn't bolt for the tearoom or gift shop.

The late spring meant that many plants and flowers that usually bloom at this time were not in evidence. On the other hand, we did get to see some plants, such as the rhododendrons, which might otherwise have been past their bloom. 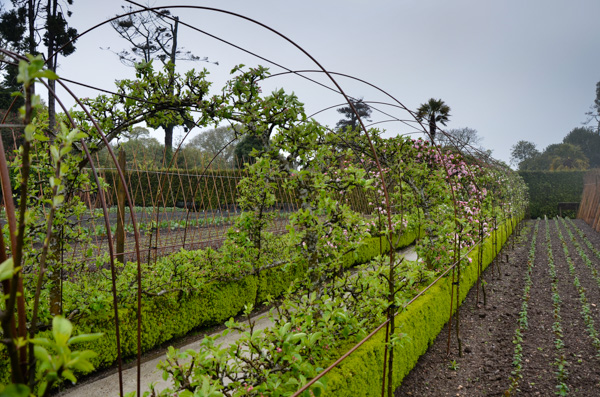 The vegetable garden had a beautiful arbor of trained apple trees. Gardeners had selected different varieties and planted them to bloom and bear in sequence. We are standing at the "late" end of the arbor. The trees at the far end were past their peak bloom, the ones in the middle section are now blooming, and the ones nearest us will bloom later.

A beautiful way to ensure a long season of fresh apples.

The restaurant on site uses fruits and vegetables produced here. 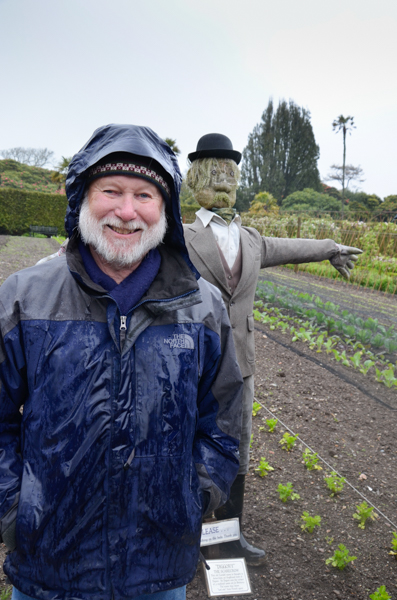 On his previous visit Jim's favorite feature was "Diggory" the scare-crow. Diggory is named after one of the pre-WWI Heligan gardeners -- a natty dresser noted for his bowler hat.

The staff takes Diggory down every winter and reinstalls him in the spring. Our visit was shortly after he moved back to the garden.

Cold frames extend the growing season. These are reconstructions, but they are based on the original 19th century designs.

Many of the 19th century tools survived the period of abandonment and we heard that the current gardeners, most of whom are volunteers, find that the old tools are better suited for the work than modern ones. Heligan now has a shop that custom-makes reproductions of the old styles.

The original Heligan garden was the first to grow pineapple in the UK. They had a clever design using the heat of composting stable waste to produce the proper conditions of heat and moisture. 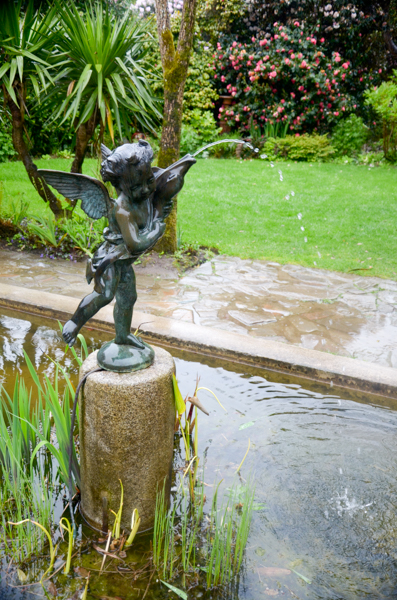 The last Tremayne who occupied the manor created an "Italian" garden sited to capture the maximum warmth of the high-altitude sun. This fountain is the centerpiece. When the gardens were restored, the plinth was found, but not the fountain.

Through a series of serendipitous happenings the restorers located the foundry that cast the original fountain. They still had the actual mold! Even if this isn't the original Heligan fountain, it is the next best thing. 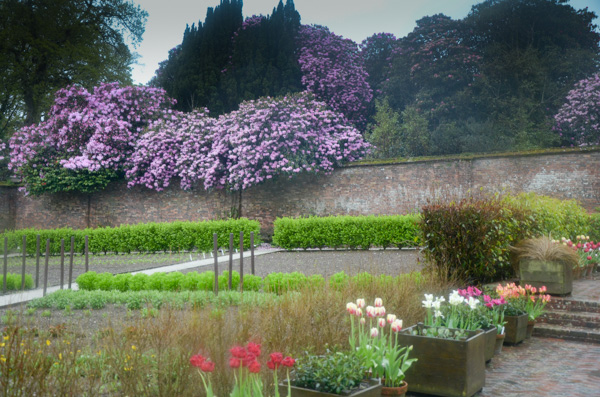 Cut flowers that decorated the manor grew in the walled garden.

The size of some of the ancient rhododendrons is evident here. The wall is at least eight feet tall and the plants tower over it.

I'm a sucker for flowers, so you may check out the flower pictures or continue on our journey to Dublin.