After our introductory hike out of Broadway, we spent a day in Oxford. The pacing of the trip was perfect with vigorous hiking days followed either by travel days or options for a less hearty excursion. 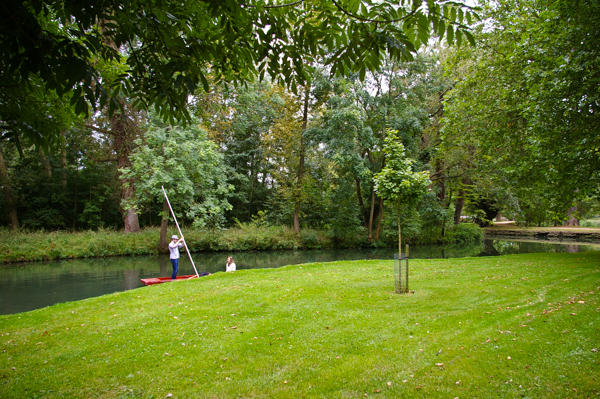 We had been to Oxford in 2009 therefore I only took pictures of places that were unique to this visit. We started our Oxford outing by walking along the Thames (or Isis as it is called within Oxford) to Christ Church meadow. We then followed the Cherwell River as it skirts the meadow. These two youngsters are punting along the river in a shallow boat propelled with a pole. Readers of Dorothy Sayers' Gaudy Night will learn a lot about punting. 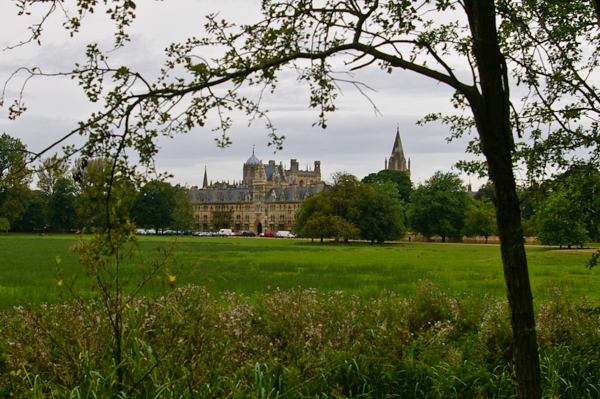 The poet Matthew Arnold called Oxford a "sweet city with her dreaming spires." This view of Christ Church across the meadow is just a subset of spires.

There has been a long-standing controversy over traffic and roads to ease traffic congestion within Oxford. One proposal was for an inner beltway, so to speak, across this meadow. This being a university town, books have been written about it and the conflict was still simmering when we visited in 2009.

The issues are similar to those encountered in the 2005 US Supreme Court decision about eminent domain.

In addition to being a much-loved park in the midst of the city, the meadow is home to a small herd of English Longhorn cattle. We wonder if Oxford has a reciprocal agreement with the University of Texas? (Hook 'em horns!) 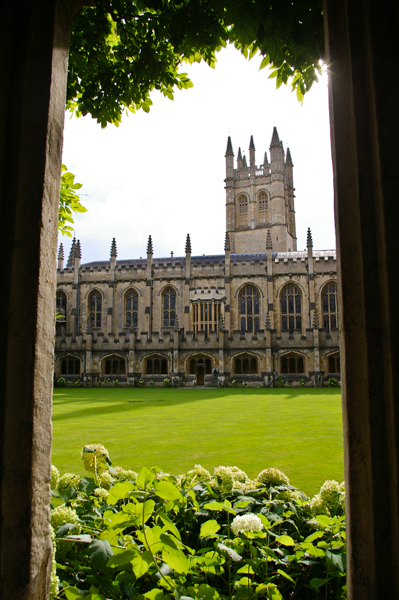 During the course of our walking tour of Oxford, I think our city guide led us past every one of the colleges! Most of our time was spent, however, at Magdalen College (pronounced MAUD-lin), where we had lunch and a tour.

Our guide explained the relationship of the colleges and university as this: the colleges are where a student lives and where the overall course of study is guided by a tutor. Since students at Oxford are considered to have gained their general education prior to coming to the university, their coursework is focused on their "major:" history, physics, etc. The various lecturers, on the other hand, work for the university, and lectures are open to the students of all the colleges. Final examinations are also administered by the university. Faculty doesn't designate the professors, it designates the building in which lectures are given, e.g., the "chemistry faculty" is the building that contains lecture halls, labs, etc. devoted to chemistry.

This is very different from the system in the US although our guides didn't seem to think so. Perhaps I got confused along the way? 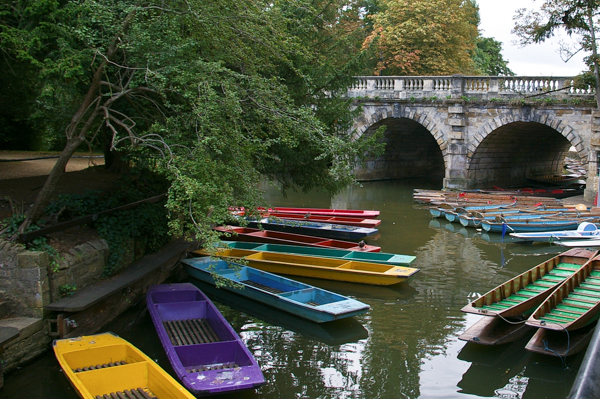 We ate lunch on a patio overlooking the Cherwell and Magdalen bridge. The punts for hire were quite colorful. This was a busy concession and there were comings and goings with occasional near-collisions.

Next to the café was the student bar (didn't have one of those where I went to school!), which was closed at the time. It is located in the oldest remaining part of the college. 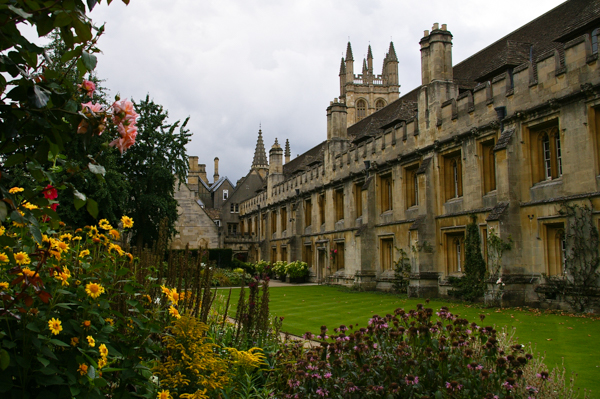 After lunch we had a walk around the grounds. The gardens overlooking the cloisters were lovely, but the deer in the park didn't come over to pose for pictures. Our guide said the herd was established to provide meat for the students!

The grounds are about 100 acres in total. 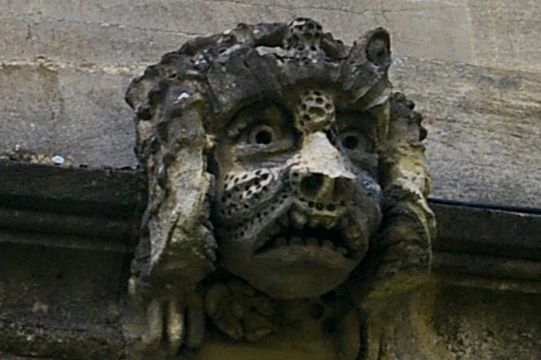 All the old buildings dating back to the 15th century were decorated with carved grotesques – all different. This one is an original carving. Others had been replaced with new figures – including at least one of the modern professors, or dons, in coat and tie. 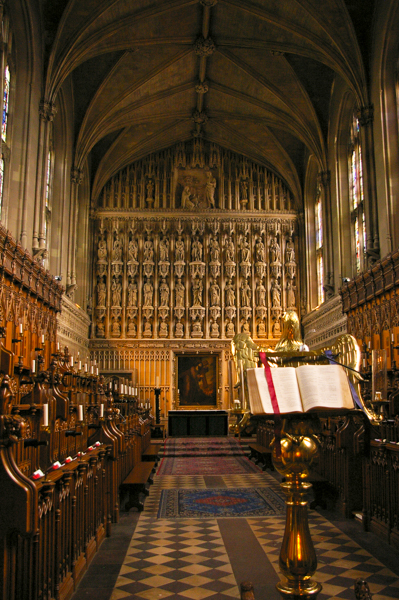 As with all very old structures, a little is original, much has been restored and some is brand-new. The college was founded in 1458 and the chapel was built not long thereafter. It has been modified over the years, of course, and only the shell remains original. The reredos at the end of the nave is Victorian. Some of the choir stalls are medieval. The lectern is 17th century. 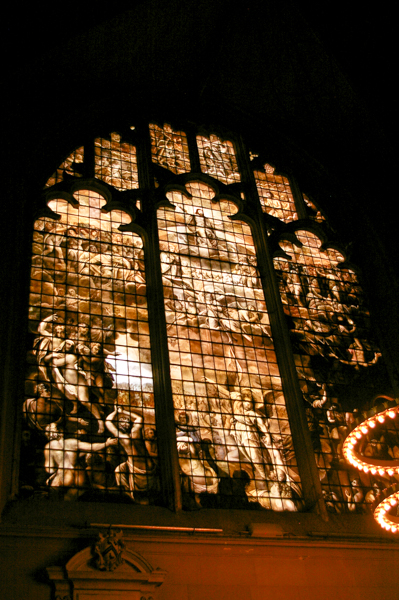 The monochromatic windows in the Ante-Chapel are unlike colorful stained glass. Francis Eginton painted the glass in the late 18th century. As the guide said, people either love them or hate them. I liked them a lot. Portions of this particular window had been damaged and only recently restored.

We had hoped to have enough free time in Oxford to visit the Ashmolean museum, which had been closed for renovation the other two times we visited the city. It was not to be. I was able to get inside briefly, at least, to visit "the loo" before getting on the bus for our trip back to Mickleton!

Click your browser's back button to continue our tour of the Cotswolds.