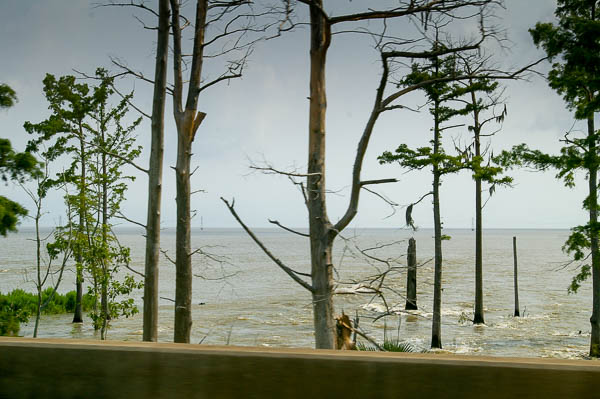 After our stay in New Orleans we decided to swing up through my home town of Vicksburg to see how the flood had affected it. Interstate 10 crosses the outflow of the Bonnet Carré. I took this photo from the car. Traffic was pretty slow as everyone rubber-necked. 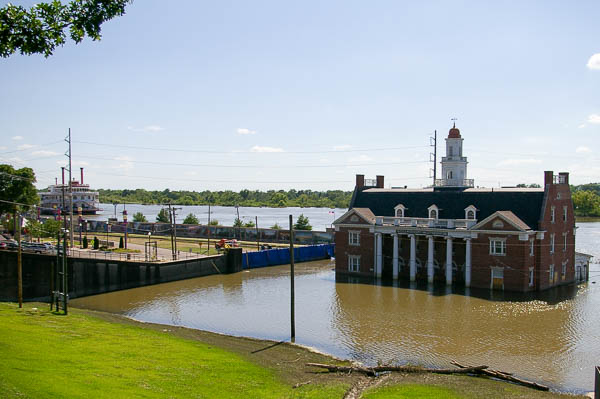 This is the picture that the papers were carrying as the flood crest passed Vicksburg. The flood wall to the left of the old railway depot protects most of the lower downtown area.

Vicksburg itself is on high bluffs and not affected by high water. Outlying areas to the north and south are.

The water here is not the Mississippi. This is the Yazoo canal, which runs by downtown.

The "river boat" in the far background was the Harrah's casino, since defunct. By law Mississippi casinos have to be located on navigable waterways and are required to "float" within a cofferdam. Several of the local casino cofferdams were sandbagged to protect them from the real river.

The flood wall itself has been decorated in recent years with murals. This is an example. But this wall is still very functional!

The flood wall is doing its job. The staining on the timbers of this gate shows how high the water has reached on its far side. It has receded about two feet from the crest, but is still well up against the wall. 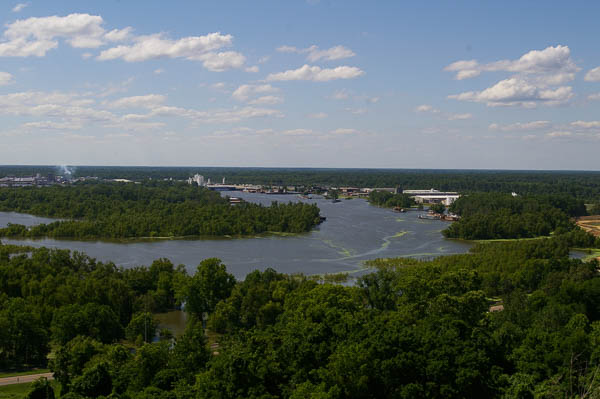 Although it is located far inland, Vicksburg is a deep-water port. The harbor facility is still functional in the flood although the canal appears to be lapping at the top of the harbor levee. The road north out of town was under water so we weren't able to get any closer than this view from Fort Hill in the National Military Park.

My family had a fishing camp on a lake behind the harbor. During floods we took a boat down the road to get there, but we never saw the water this high. 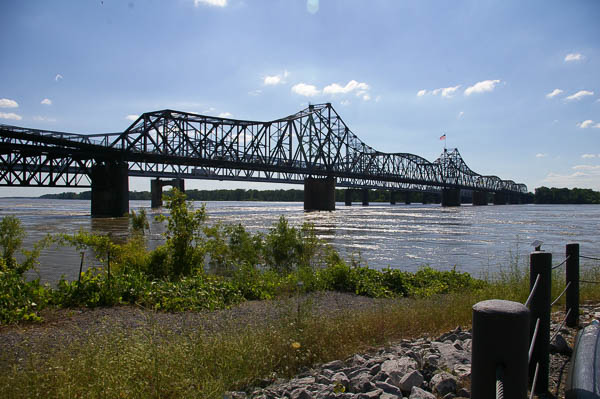 These bridges cross the Mississippi River south of Vicksburg. The closer bridge is the old one. A rite of passage for local teenagers was driving across this narrow bridge. (I remember it well!) It is no longer open to cars although the train tracks are still in use.

The bridge in the background is the Interstate 20 bridge. 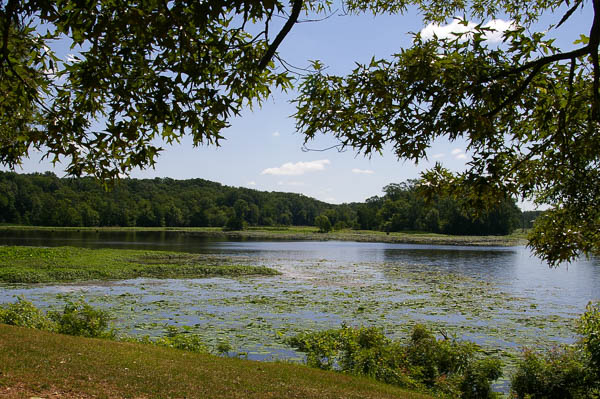 After spending a night in Vicksburg we headed north on the Natchez Trace Parkway. It is a lovely and peaceful drive. This stop is along the Pearl River just north of the Barnett Reservoir. Ironically there had not been any flooding along the rivers other than the Mississippi because there hadn't been any major precipitation within the state borders. 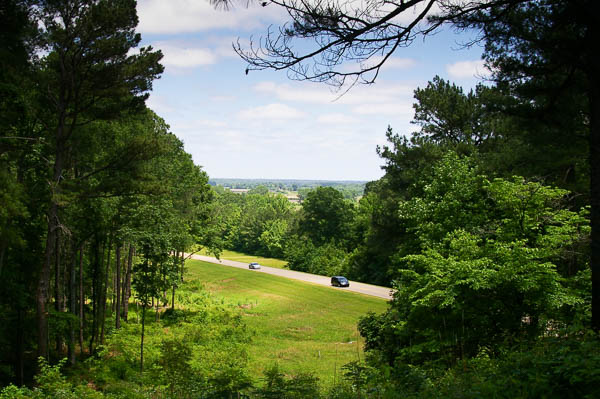 Here the Trace comes down into some swampy bottomlands called Twentymile Bottom. It was a miserable area during the early 19th century when this was a major transportation route. I never found out what it was twenty miles from.

All along our route we saw the remnants of the devastating April, 2011, tornado swarm. Many trees were down and broken off. In the Starkville area the parkway was still closed to remove trees and we had to find an alternate route. 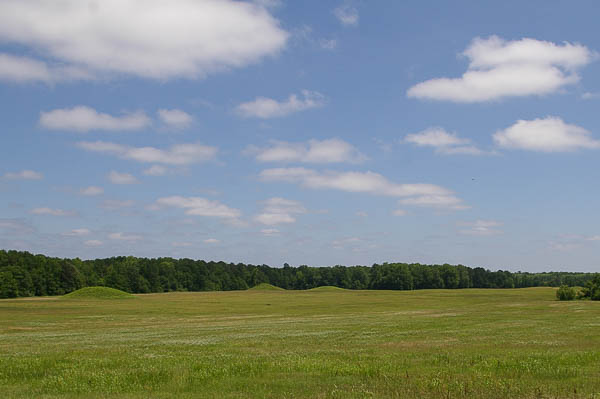 At Pharr Mounds we saw the remnants of several Indian burial mounds from the 1st and 2nd centuries AD. Shortly after this stop we left the Trace to head east to Florence, AL, where we were to stay the night. 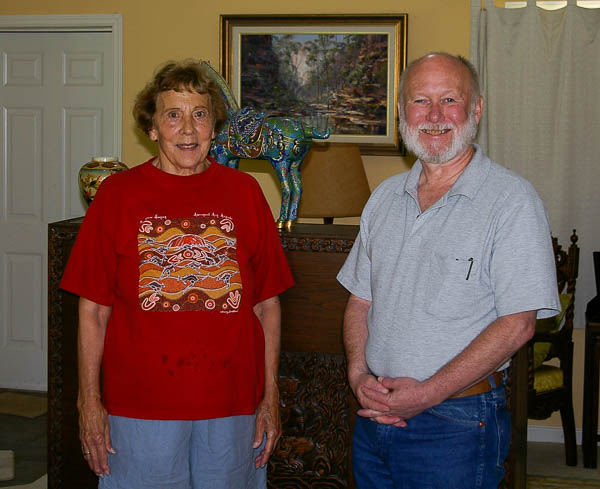 Lu was the breeder of my late mare Kimber. We had recently reconnected and when Lu heard that we would be traveling through her area, she graciously invited us to stay with her. Although she has lived all over the world, she is happy to be in Florence now. 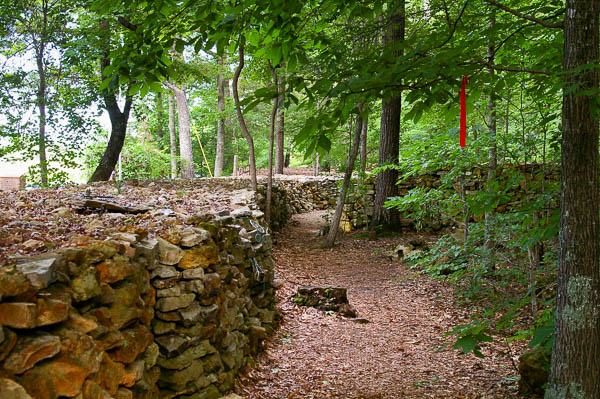 Lu took us to see the stone wall built by Tom Hendrix as a memorial to his great-great-grandmother who was a Native American of the Yuchi tribe. This was a remarkable site and no picture can do it justice. The wall symbolizes the travel of his ancestor as she was taken away to Oklahoma on the trail of tears and as she returned alone and on foot – the only person documented to have done this. 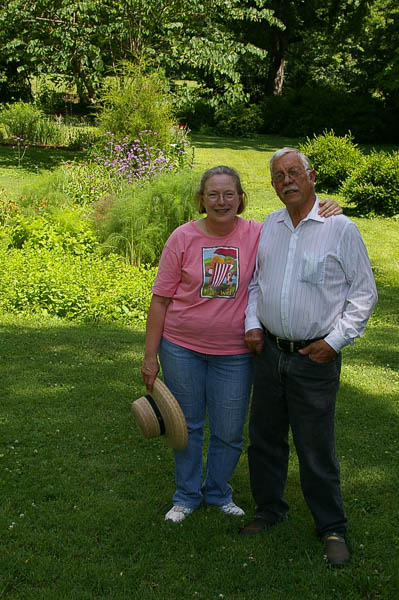 After bidding Lu goodbye, we traveled to Mooresville, AL, to visit my old friend Kathryn from Vicksburg and her husband Jerry Davis.

On the way we passed more devastation from the tornadoes that ripped through Mississippi, Alabama, Tennessee and Virginia in April. Mooresville had escaped a direct hit, but was without power for several days. The Davises said it was a good time for neighbors to get together, contribute food from dormant freezers and have pot-luck cookouts.

It was wonderful on this trip to see friends and relatives that we haven't seen in years – decades in some cases. 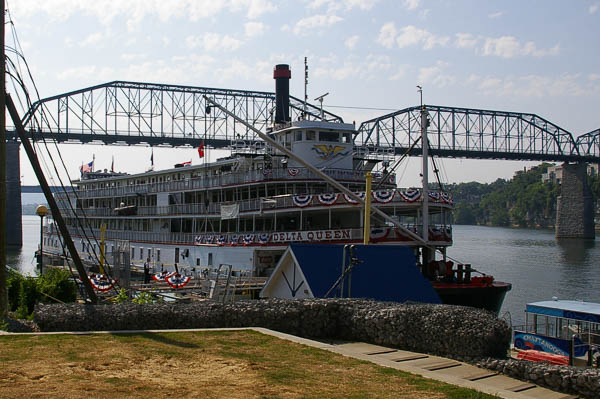 For our final night on the road we stayed at the Delta Queen Hotel in Chattanooga, TN. We had always wanted to take a river trip on this boat, but never got around to it. (OK, we were cheap.) Now that it is serving as a floating hotel we at least got to spend a night. In the bar that evening we chatted with the managers who were still hopeful that they will be able to restart the riverboat trips. Hasn't happened as of last check.