After passing through Sedona and Flagstaff, we arrived at the South Rim. It was too early to check into our hotel, the Yavapai Lodge, so we went to Mather Point for our first "ooh-aah" overlook of the canyon.

The Grand Canyon, which at first (second and third, etc.) glance may seem straightforward is, to borrow the words of Winston Churchill, who wasn't speaking of natural wonders, "a riddle, wrapped in a mystery, inside an enigma." One of the recommended books, Carving the Grand Canyon, surveys the leading theories. The summary at the end describes the two sentences containing the "most truth" about the canyon's origin: "The Grand Canyon was carved by the Colorado River. To date, geologists have been unable to determine the canyon's precise age and what specific processes were at work in carving it."

I will point out mystery and questions as I go along, but mostly I just wondered at the gorgeousity of it all. 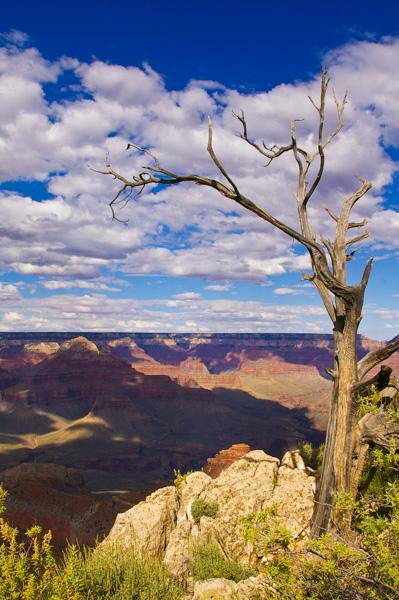 Cloud shadows make it easier to take pictures of the canyon because of the contrast.

Mather Point is named for Stephen T. Mather, the first director of the National Park Service.

We walked along the rim, which is delightfully free of barriers, fences, etc. in most places.

The formation in the center with the sticky-uppie on its top is "Vishnu Temple."

The South Kaibab trail runs to the Colorado River along the ridge in the foreground.

Someday I hope to take a mule into the canyon and spend the night at Phantom Ranch.

At every vantage point the views were stunning.

One of our group summed it up: words can't begin to capture this place – nor can pictures for that matter. 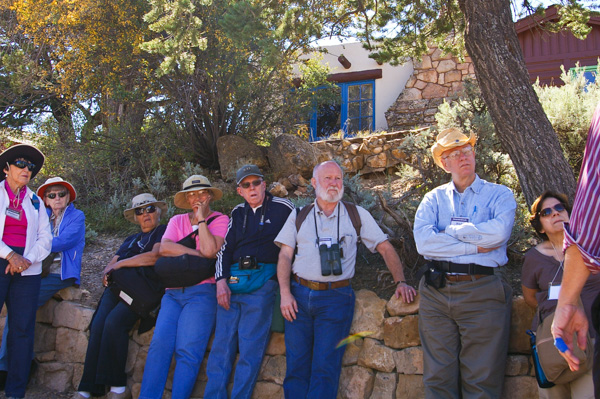 The next morning we visited Grand Canyon Village where local historian Henry Karpinski told us about the places and the people in the history of the canyon.

Jim and others are standing in front of one of the Bright Angel Lodge cabins listening to Henry's entertaining, irreverent, and informative talk. 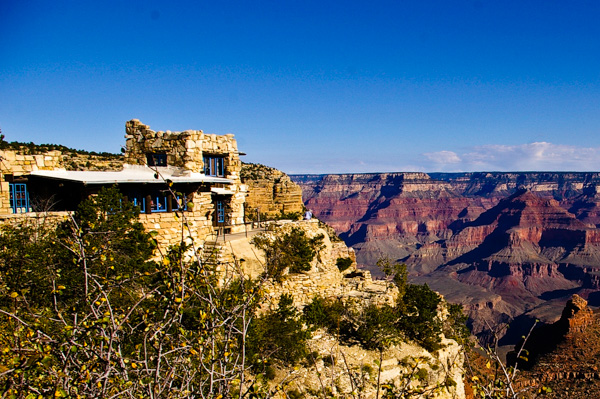 Lookout Studio is among the many structures at Grand Canyon designed by the most famous architect you never heard of: Mary Colter. She achieved great things in a profession and at a time when women were never expected to succeed outside domestic pursuits. 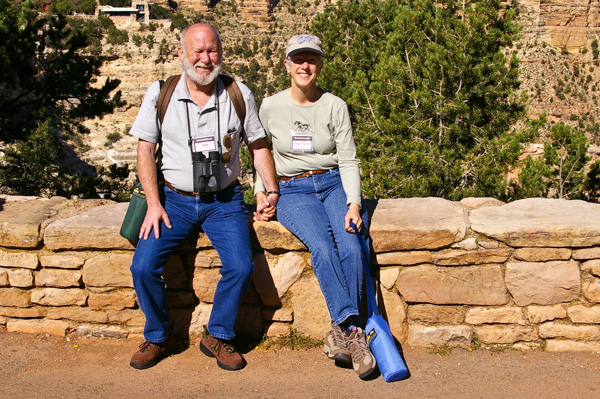 When the CCC built the canyon infrastructure, including this wall, the Harvey Girls lived in a dormitory that faced it. In spite of rules against marrying, stories grew around the heart-shaped "Love Rock" inset into the wall between me and Jim. Did a heart-sick CCC man carve and place it here as a message to his beloved. 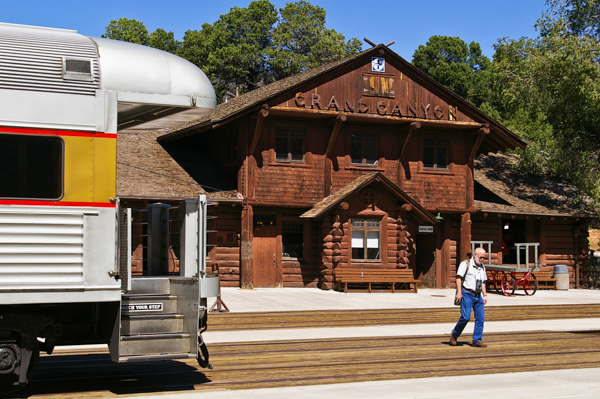 By the end of the 19th century there were a number of individually owned tourist camps and inns at the Grand Canyon -- most of them on or near earlier mining claims.

In 1901, the Santa Fe Railroad built a railway line to the canyon and completed this station by 1910. The line is now operated by the Grand Canyon Railway, which runs one round-trip train daily. 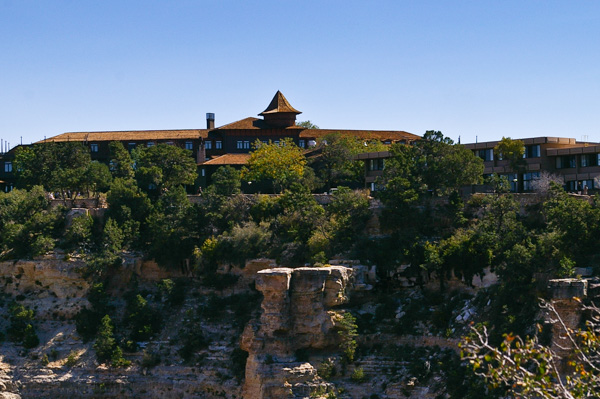 The Santa Fe RR built the El Tovar in 1905 as one of the first great hotels in the southwest.

Existing tourist camps couldn't compete with the El Tovar in luxury, and the railroad squeezed out the small operators. The Park Service's selection of Fred Harvey Company as the sole concessionaire dealt the coup de grace.

When I traveled to the Grand Canyon with my parents in 1962 ,we stayed at the El Tovar. By then it was showing its age. I expect it has been renovated since. Jim & I had a very nice lunch at the hotel restaurant. 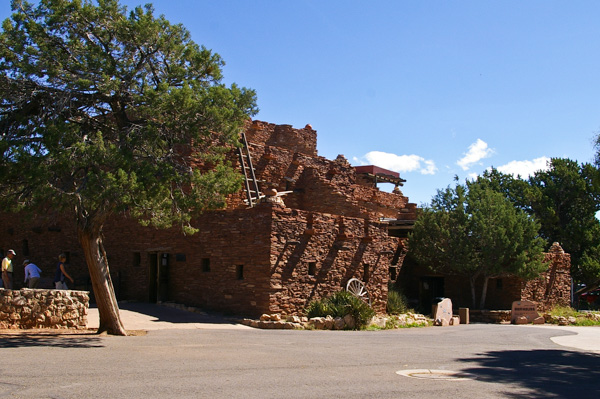 The Santa Fe had noticed that in Albuquerque and other places enterprising locals carried on thriving businesses selling souvenirs to tourists. Not to be outdone, they commissioned Hopi House, also completed in 1905 and designed by Mary Colter, to be a workshop and gift shop selling Native American crafts. It is across the circle from the entrance to the El Tovar. 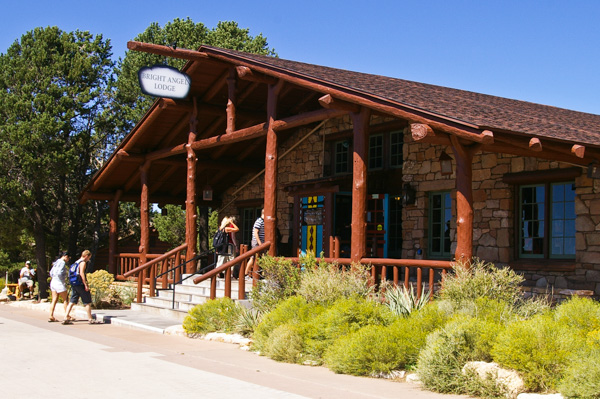 Mary Colter designed the Bright Angel Lodge in 1935. It comprises the main building, shown here, and a number of small cabins, many of which directly overlook the rim.

While visiting my cousin in Kansas we had discussed the epic migration of the Monarchs.

I had not seen a monarch in Virginia in quite some time, so I was pleased to see this one on its way to Mexico for the winter. 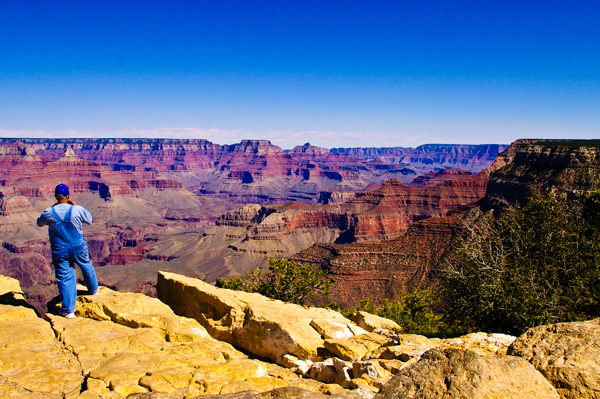 In our litigious society we marveled that, throughout most of the Grand Canyon, we could walk right up to the rim (or over it if you weren't careful).

One night there was a ranger talk on "Death in Grand Canyon."  The largest number of fatalities was from a mid-air collision of two commercial airliners that in part led to the creation of the FAA.

The intent of the talk was not ghoulish – it warned people of dangers and how to be safe.

We saw several rock squirrels on the south rim. 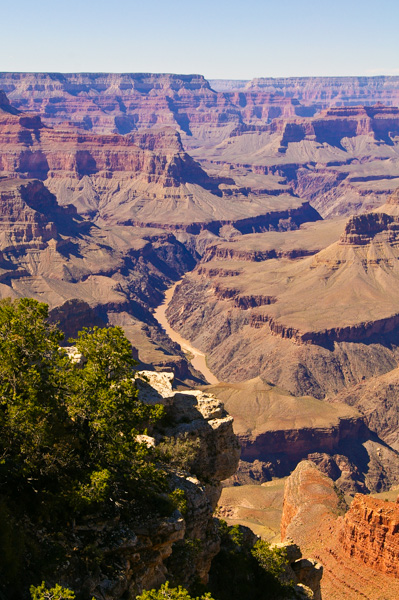 There aren't many places along the rim where a significant reach of the Colorado River is visible – this is one. Although it may look like a tiny stream here, the river is about 300 feet wide. That's the length of a football field! Scale matters.

After passing through the Glen Canyon Dam the river is clear and green. Here it has already picked up a load of sediment.

A free shuttle runs the eight miles along Hermit's Road from Grand Canyon Village to Hermit's Rest. There are several stops along the way and it is possible to walk on the rim the entire distance.

Hermit's Rest is the end of the south rim drive. Mary Colter designed the building that now holds a gift shop and snack bar. It is smack on the rim with trees and shrubs enough that I couldn't get a picture of it.

See more at the link.

Tthis is a western scrub jay (I think).

There are a number of different jays found at the canyon.

We were hoping to see a California Condor since they are released near here, but we never did. 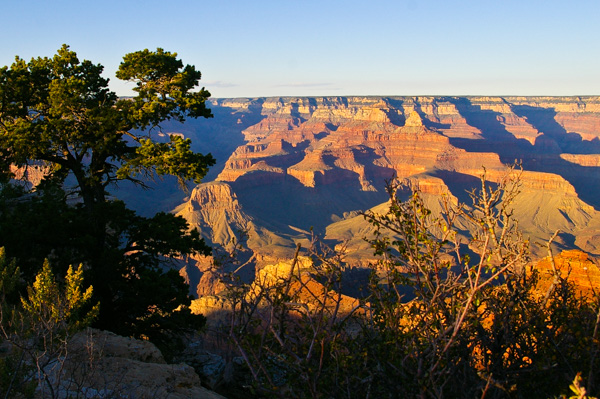 That afternoon we watched the sunset at Mather Point. Since it was the fall it wasn't crowded. We got a good vantage point to watch the changing colors and shadows. 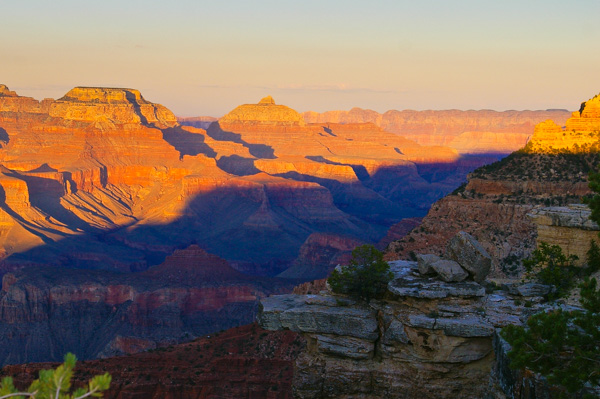 I have a similar picture above taken at a different time of day. It's fun to see the lighting change the view.

Daytrippers miss the dramatic effects of the changing shadows. I haven't included any of my mid-day pictures because they are washed out and bland. 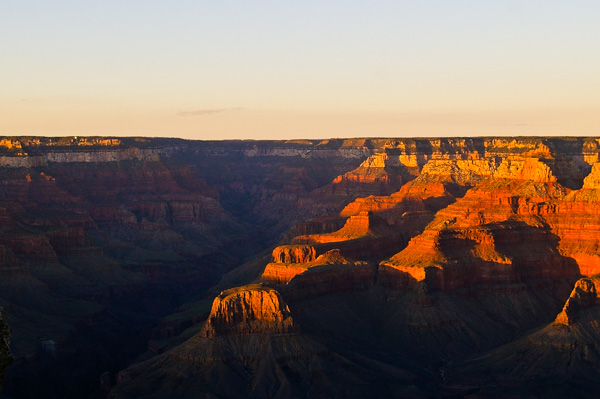 Believe it or not, this is a picture of the North Rim Lodge. Where, you ask?

A tiny speck of light reflects from the lodge windows. It is on the rim to the left of the picture.

The side canyon in the center of the picture – all in shadow here – is Bright Angel canyon.

At this point the canyon is roughly ten miles wide as the condor flies. 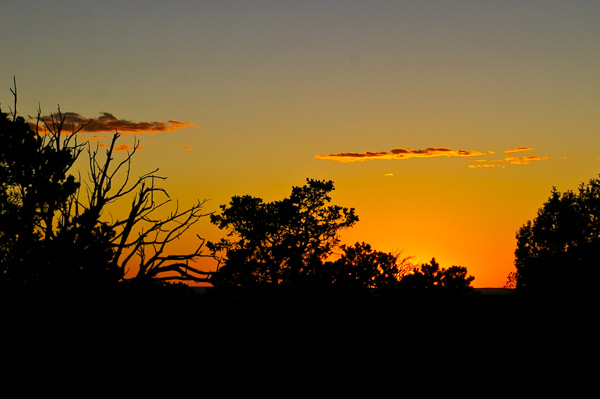 The main attraction of sunset in the canyon is the light and shadows within the canyon, but the actual sunset ain't bad. A few more clouds would have spiced it up a bit, but hey.... 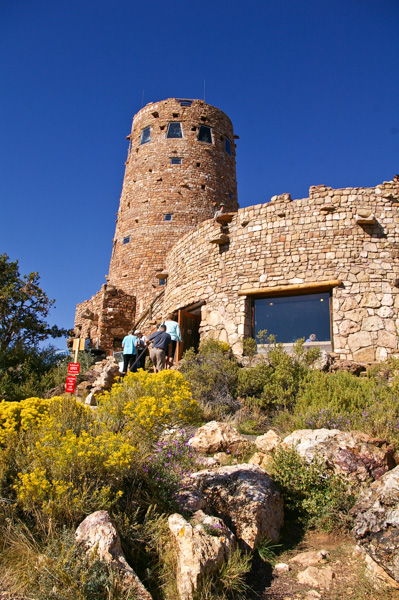 The next morning we were back on the bus for our trip to the North Rim.

Another of Mary Colter's creations is the Desert View Watchtower. Her attention to detail is evident throughout the construction.

Henry Karpinski described the care with which she researched the canyon and chose this particular location. Part-way during the tower's construction, Ms Colter was called away for a few weeks. Workman continued construction thinking that they understood her general plan. But "general plan" wasn't enough. She had them tear out all that they had done and rebuild it under her guidance, which extended to the placement of specific rocks.

The building was a work of art. 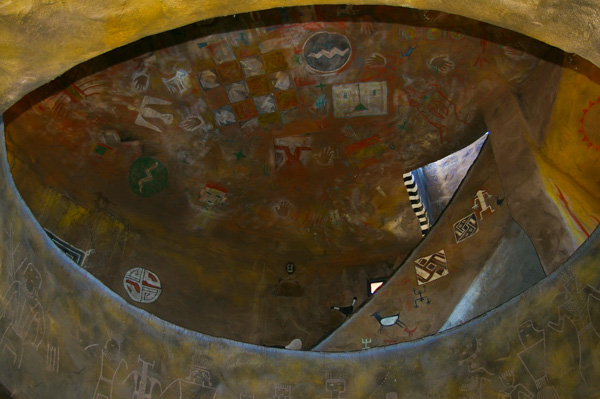 The slope from the north rim, on the right, is much more gradual. The north rim is higher than the south rim – by about 1000 feet. 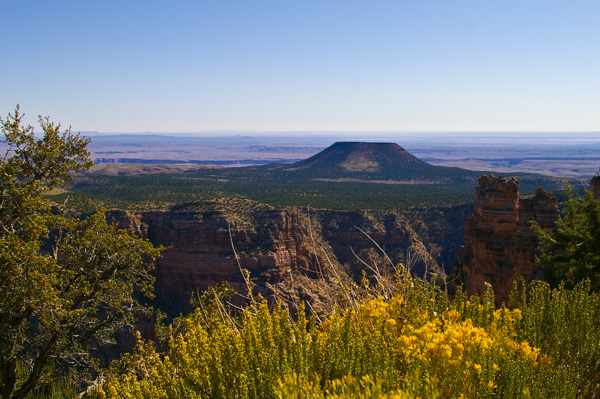 The view east over the Painted Desert. We saw more of this region on our way to the North Rim.

This picture indicates one of the many anomalies of the Grand Canyon. Rivers flow around higher landscape features, but the river has carved a deep gorge through an area much higher than its surroundings. Why? How? When? Theories abound, but no one knows for sure. 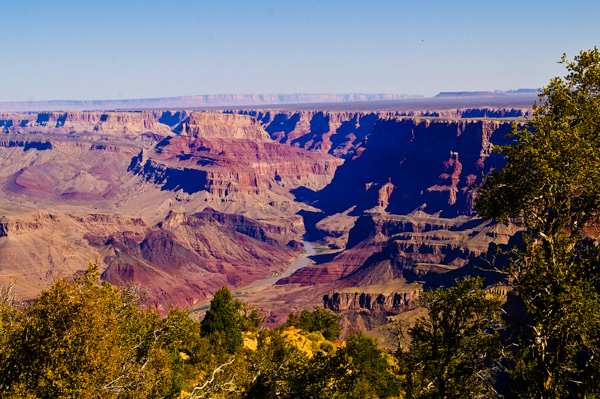 The river makes a sharp turn here. It has been flowing south, but it turns almost 90-degrees to the west. Why it does so is another of the many puzzles about the river and canyon.

Beyond the canyon the terrain is flat for many miles until the Vermillion Cliffs in the distance. We will drive over 200 miles past these cliffs to get to our destination on the North Rim. It will take most of a day.