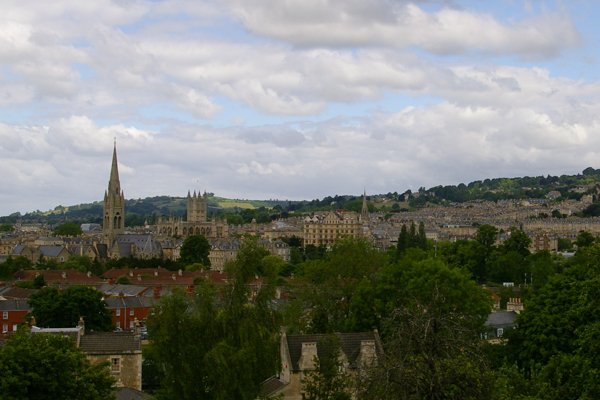 After taking the train in from Oxford, we walked to the bed & breakfast we had booked. It was indeed a short walk from the city center, as promised, but we were dismayed to find that the walk was up a very steep hill. Dragging our luggage. In the rain.

Nevertheless Oldfields was a very nice place to stay and in a good location overlooking the city. We particularly liked the availability of a book with various walking tours of the city. That bit of serendipidy made our stay much more enjoyable. 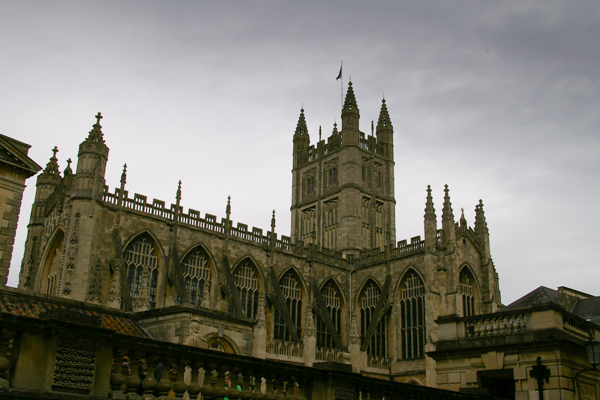 Jim had never been to Bath. I had made a day trip there many years earlier when I was traveling to England on business and was now looking forward to spending more time. I particularly wanted to see the locations associated with Jane Austen, who had lived and set portions of her novels there.

One of our first stops was the abbey church. There has been a house of worship in this location since the 8th century. For a while it was a cathedral, but the bishopric moved to Wells in the 13th century where it is located today.

The present building is much smaller than it was then. 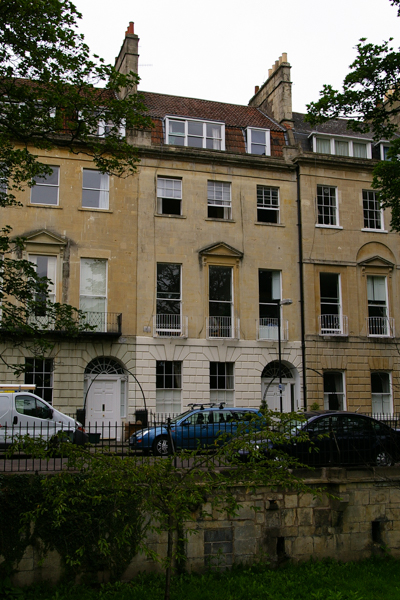 Using the walking tour book from the B&B, we dedicated part of a day to Jane Austen. Our first stop was #4 Sydney Place (not open to the public) where Jane lived when they first moved to Bath after her father's retirement. Although the location seemed convenient, it was low and damp and had a bad effect on her father's health.

This was our first introduction to a feature of much of Bath: many streets are raised above ground level. This provides space for kitchens, coal storage, and other support functions while allowing the family and guests to enter at a main level.

As you can see, the street is raised above the level of the park adjoining these homes. 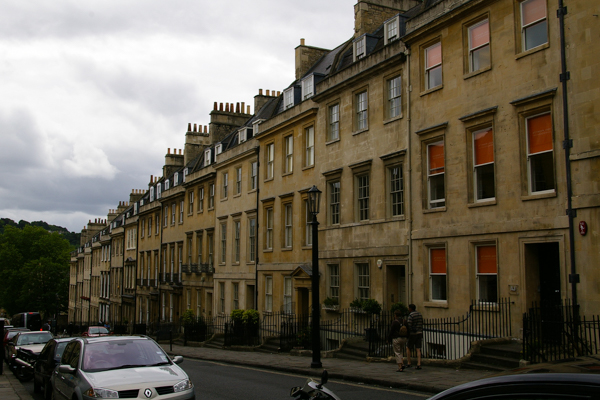 After Mr. Austen's death, the family consisting of Mrs. Austen, Jane, and her sister Cassandra, moved to #25 Gay Street, one of this row of buildings. The family lost Mr. Austen's pension and this was a less expensive location.

Across the street from the houses shown here is the Jane Austen Centre.

We will see other sights associated with Miss Austen's books later. 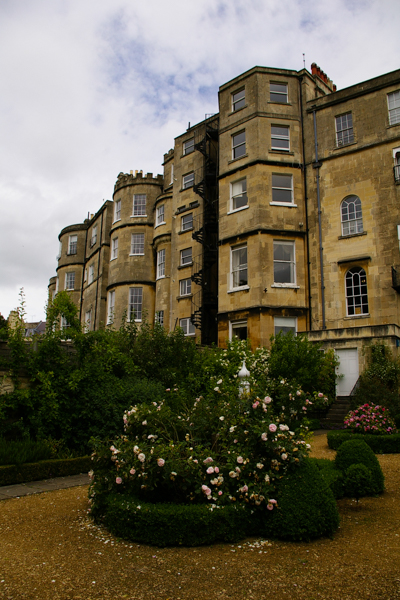 All houses in the Bath city center were like the ones shown above: they front directly onto the street and are very uniform in appearance.

The rear of the houses is quite a different story. Most houses have gardens and there is little uniformity of construction. In some cases the back sides of the houses are not even finished. Here, for example, you can see an exposed spiral staircase. Our guidebook described such characteristics as "Queen Anne front and Mary Ann backside."

These particular houses, which front onto the elegant Circus, are not too shabby on their backsides. This lovely garden was open to the public. 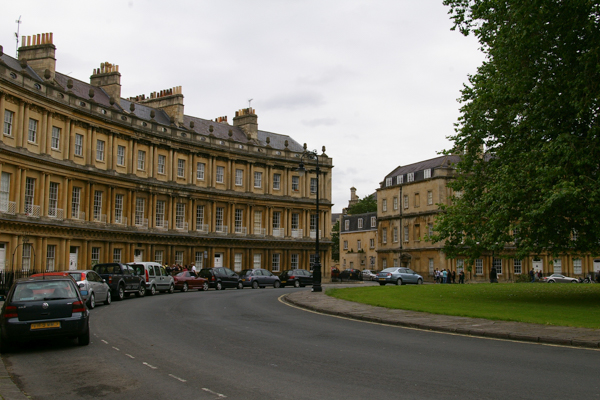 A view of the same houses from the front.

Although the exterior design would lead you to think that the houses were all identically sized and laid out, that was not the case. Even though a large house might be adjacent to a much smaller one, it is difficult to see the variation without looking closely. One clue is to look at the chimneys. 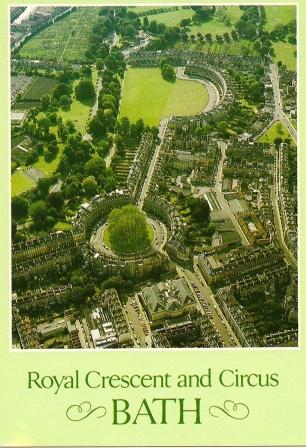 Not having a drone, I purchased a postcard that shows the relationship of the Circus, shown in the image above, and the Royal Crescent, shown below. 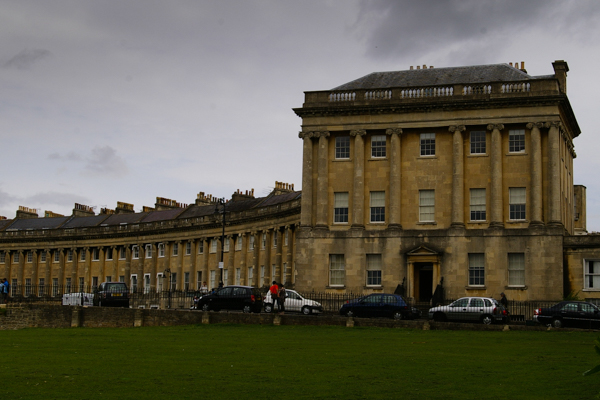 Not far from the Circus is the Royal Crescent. The end building facing us is #1, a museum open to the public. One of the houses has been converted into a hotel. The others are still privately owned. It is a very impressive sight. 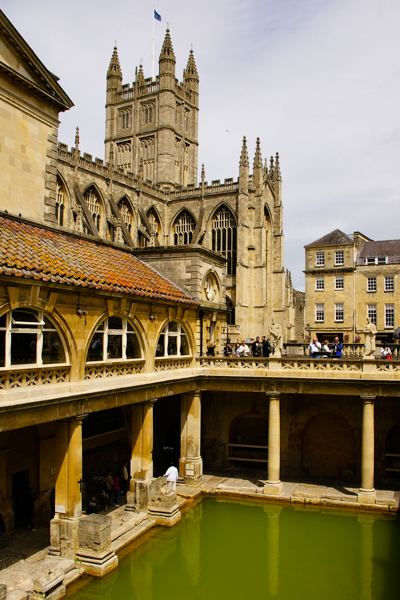 Our next stop on the Jane Austen exploration, the Assembly Rooms, was closed for a private party. So we proceeded on to the Roman baths.

Bath has been known for its hot springs since prehistoric times, hence the name. The area was developed during the Roman occupation of Britain and has been a resort ever since.

These are the Roman baths. The building is relatively modern (18th century), but the bath itself is original. The Romans were magnificent engineers and the channeling of the spring water still works well.

Although the water is green, it isn't stagnant – in fact it is constantly being circulated.

As can be seen with the abbey in the background, these baths are pretty much in the center of the city. 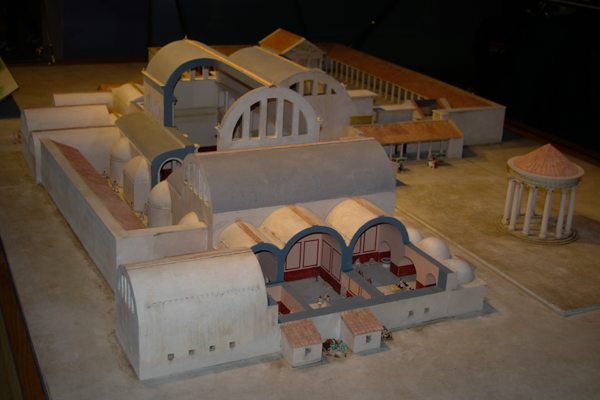 The museum at the baths had a model of how the original structures would have looked. The baths were covered with barrel vaults. The large cut-away vault covered the main bath shown above. The smaller vaults in the foreground covered sauna-like facilities.

There was a display of a remnant of the Roman roof that illustrated how those great engineers used hollow tiles to lessen the weight of the massive clear-span vaults. 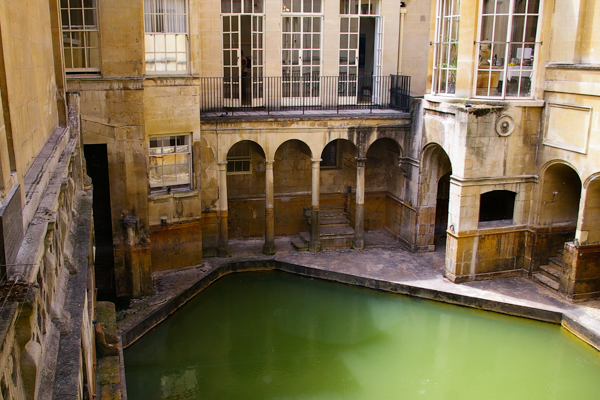 The area known as the King's Bath was used into the 20th century. The former water level was much higher as can be seen by the discoloration. Bathers sat in the niches.

This building was constructed in the 12th century using the earlier Roman building as a foundation. It has been modified since.

On the upper level to the right of the photo is the Grand Pump Room. Back in Jane Austen's day it was the place to see and be seen. At that time it would have been quite new. I don't recall that she ever mentioned the baths in her books, however. 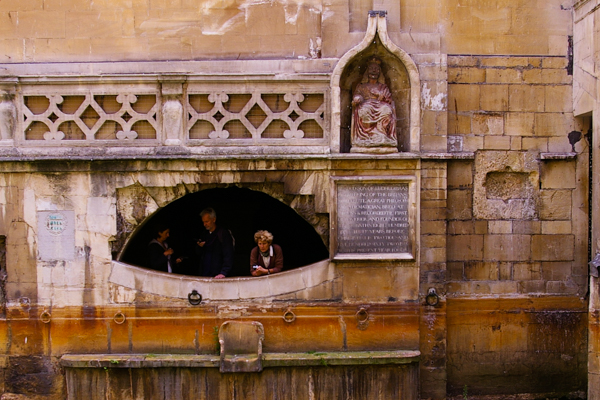 The figure in the niche is King Bladud, the legendary founder of Bath. It is his presence that gives the King's Bath its name.

According to the legend, both he and his pigs had leprosy. He noticed that the pigs were cured after wallowing in some hot springs. He tried it out and was also cured. The story is, of course, hog wash of a different type. The city was founded by the Romans.

There is more at the link. 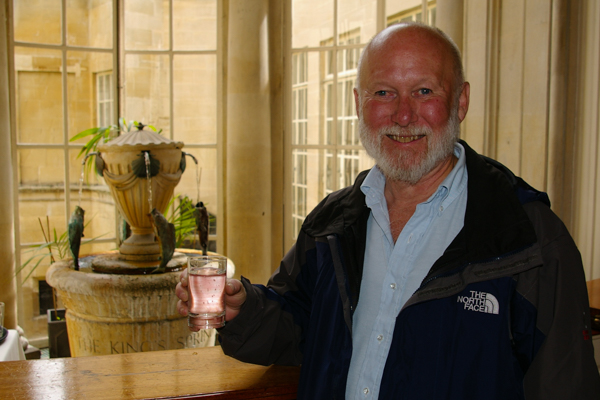 Jim "taking the waters" in the Pump Room. 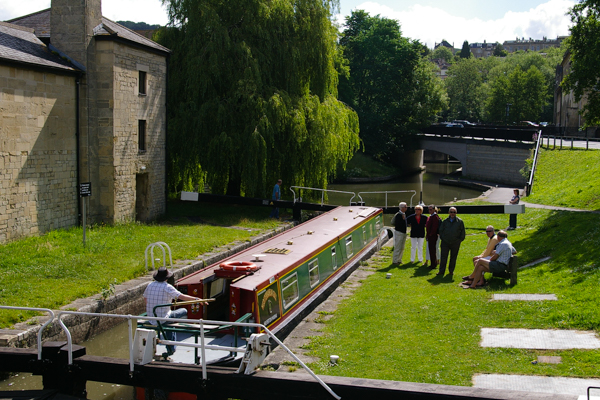 The next day we gathered up our borrowed walking tour book and crossed the Avon to check out the Kennet & Avon canal. The long narrow canal boats can be hired for self-guided excursions. They provide sleeping, cooking and dining. The Kennet & Avon Trust also operates excursion boats.

We know some folks who hired one of the canal boats for a week's travel in England. They said it was great fun. 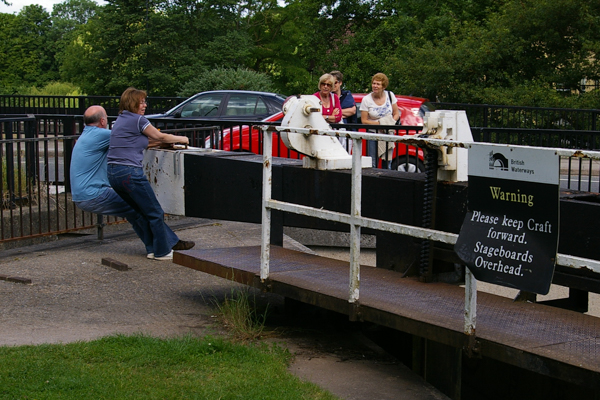 Those who hire the self-guided boats must learn how to maneuver them and also operate the canal locks. On this canal, which has been restored in recent decades, the lock gates are in good repair, but this is still not a cushy job. 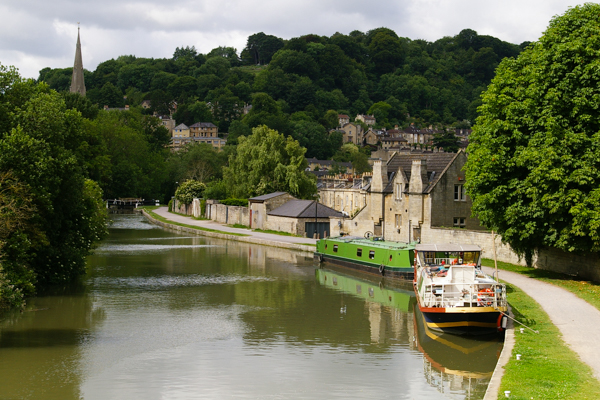 The reward is seeing a scenic portion of England that isn't visible to the crowds of bus tourists.

Walking the "tow path" was fine for us, although we were soon to abandon our easy stroll and start climbing long steep hills. 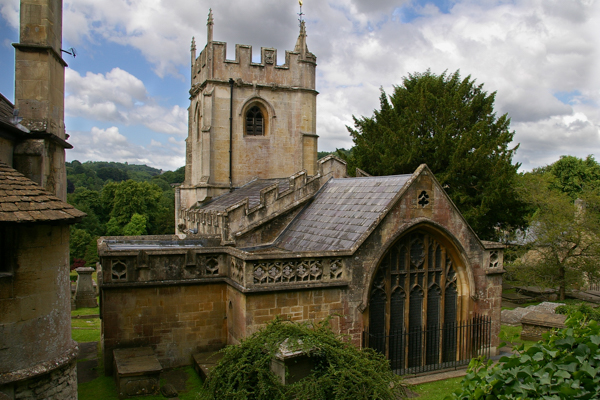 Our ultimate destination for this hike is the National Trust Garden at Prior Park. There were a number of charming villages along the way. Widcombe contains the Thomas à Becket church, built in the late 15th century on the site of an earlier Norman church.

It wasn't open when we were there, so we couldn't go in (although we would have been happy to break the climb a bit longer!). 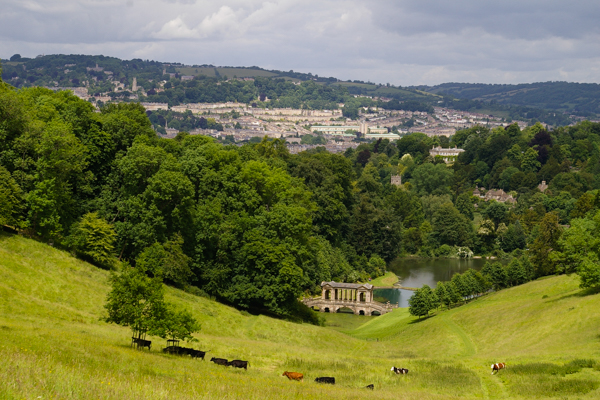 Prior Park was built in the mid-18th century by Ralph Allen and designed by John Wood, who was the architect of much of Georgian Bath including the Royal Crescent and Circus. Mr. Allen, the model for Henry Fielding's Squire Allworthy in the novel Tom Jones, reformed the British postal service to become more efficient and later provided much of the building stone for the 18th century reconstruction of Bath.

The mansion at Prior Park is now a school and not open to the public, but the large landscape garden is managed by the National Trust. 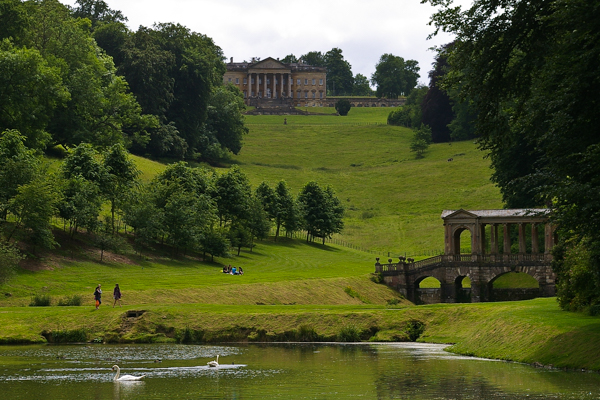 The Palladian-style "bridge to nowhere" is perhaps the most famous feature of the garden. 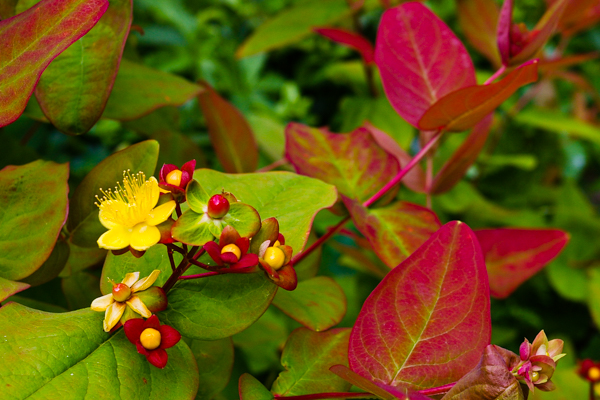 Landscape gardens are noted more for their use of structures, use of water, landforms, and structure & texture of trees and shrubs than for flower beds. This gaudy shrub was the most colorful plant that we saw. I fell in love with it, but unfortunately I have not been able to discover what it is. I WANT ONE! (Update from 2013. It is apparently called Tutsan – Hypericum androsaemum.)

The following day we bade farewell to Bath and caught the train back to Birmingham for the Rotary convention.