After our travels around England we were ready to "get to work" at the Rotary convention. Jim had never been to one before, nor had I, so we weren't quite sure what to expect. It was a fabulous experience. The host clubs and the city and citizens of Birmingham had put together a great program.

The National Exhibition Centre (NEC), airport, and train station are all integrated. It made it very easy to get around. We had elected to stay in Birmingham center rather than in one of the hotels near the convention site so we became quite familiar with the trains.

We stayed in Birmingham, but due to the number of Rotarians, people stayed in numerous towns and cities in the area. The excellent train service meant that they could come from several directions. 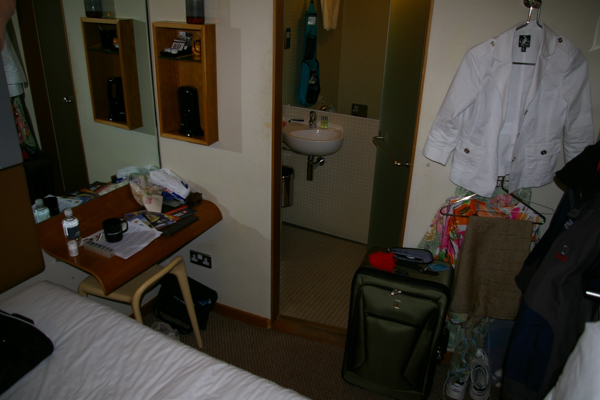 Jim & I had read about a new trend in downtown hotels: very small and inexpensive rooms. Since one of the convention hotels, nitenite, was in this category, we decided to give it a try.

Well, it was interesting. The rooms are definitely tiny. This picture shows it all. No closet. No drawers. Two (2) fixed clothes hangers. Had both suitcases fit underneath the bed it would have made a big difference, but one didn't.

On the other hand, it was inexpensive and well-located within easy walking distance of the train station, downtown restaurants, shopping, and cultural venues. For one person it would have been quite comfortable. For two – not so much! 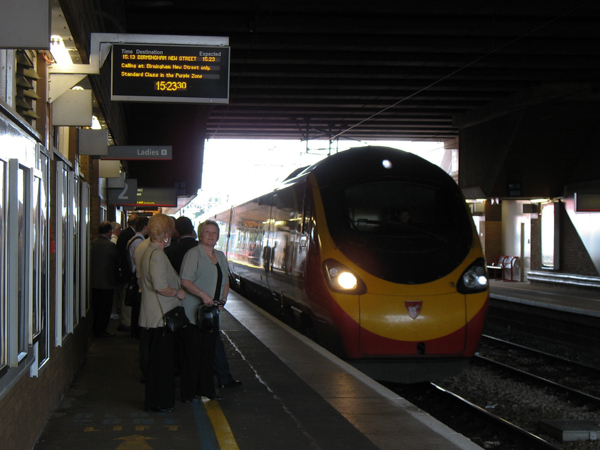 Train travel between the cities hosting Rotarians and the NEC was free of charge for those with identity badges.

Regular riders on the trains used by the conventioneers were somewhat overwhelmed by the crowds, but were gracious. It was standing room only! We were able to chat with many locals. I was surprised at the number of people who were more-or-less regular commuters from Birmingham to London.

I was also surprised to hear that, although Virgin Atlantic has been very successful, Virgin Trains has had significant start-up, management and technical problems that caused a lot of grumbling among their rail passengers. 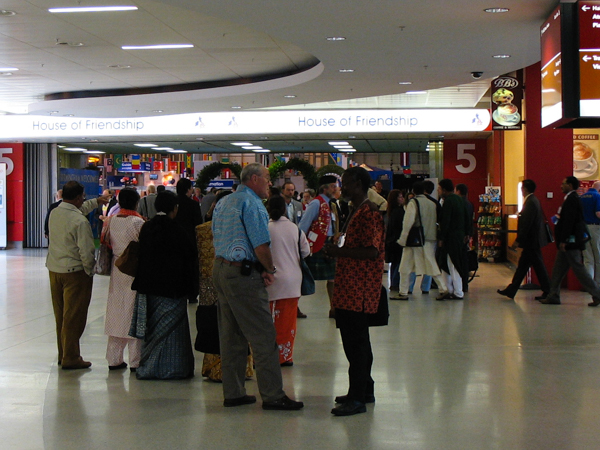 The NEC in Birmingham is enormous and spread out. There were numerous venues used for plenary sessions, break-out groups and general mingling. We like all the various national outfits worn by visiting Rotarians.

The "House of Friendship" in the background had restaurants, entertainment venues, booths for numerous good-works and fellowship programs, and shops selling local specialties.

While enjoying a pint waiting for Jim one afternoon I sat at a table with a young woman who turned out to have been in the first co-ed graduating class at Lexington's Washington & Lee University! It's a truly small world.

The plenary sessions were held in the LG Arena. Even though it was huge, there were two opening sessions to accommodate all the attendees.

This session featured the RI president, D. K. Lee of Korea. Other major presenters were Ban Ki-moon, then Secretary General of the UN, Jane Goodall, and Mia Farrow, representing UNICEF, which partners with Rotary in the eradication of polio worldwide.

We attended many sessions describing the work that Rotary is doing to help people throughout the world. 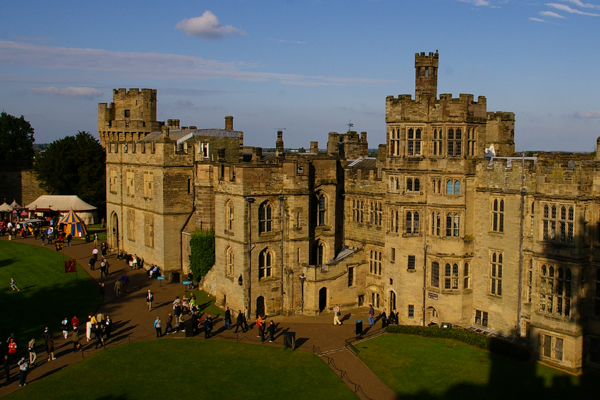 One of the events that had been planned as part of the convention was an outing to Warwick Castle. Original parts of the castle date to William the Conqueror. The gardens were designed by Capability Brown.

Buses picked up participants from various locations. We were lucky to catch an early bus so were able to see much of the castle (and eat!) before it got too crowded. 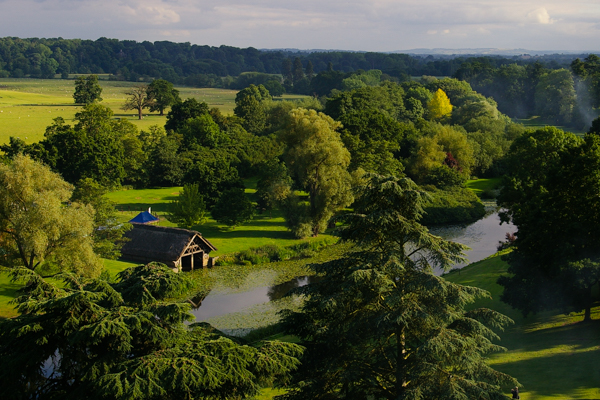 The river Avon runs through the grounds. There are two Avons in England. The one we saw in Bath is not the same one as this. This is the "Stratford-on-Avon" Avon.

The smoke towards the right of the picture is from the barbecue pits where our supper is being prepared.

The boathouse is a 19th century addition. 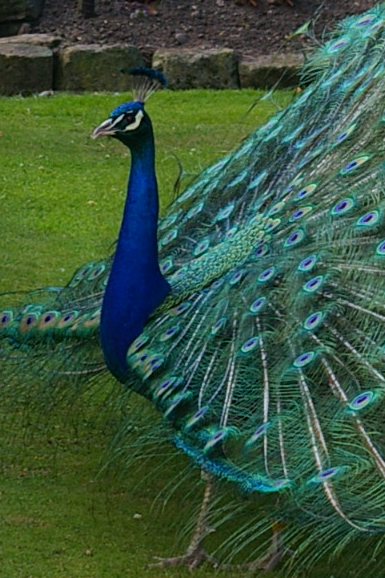 In addition to the landscape garden, there were a number of peacocks prowling about formal gardens adjacent to the conservatory.

This one was quite the ham – he waited until he had a sufficient audience then put on a wonderful display. As he strutted around it was evident that he enjoyed being the center of attention.

Among the medieval exhibitions was a jousting match. It was presented as an narrative including the handsome hero, shown here, at least one villain, the requisite damsel in distress, and so on.

Another group of enactors demonstrated a trebuchet. The stones it hurled made some impressive dents in the turf. Happily they didn't smash any Rotarians.

Two men demonstrated historically accurate sword-fighting. Heavy armor was not used; chain mail was. It was lighter and gave better mobility. Metal shields were not common; wooden shields were. They were lighter, stronger, and more protective against arrows, which tended to ricochet off metal to the detriment of one's neighbor knight.

It was a fun afternoon.

The down side of getting there early, however, was a desire to leave early. The bus drivers had been told to wait until late in the evening, but a group of us kidnapped a driver and forced him to take us back. We didn't use swords, but we made it clear that we meant business. More mild-mannered Rotarians were up until VERY late. 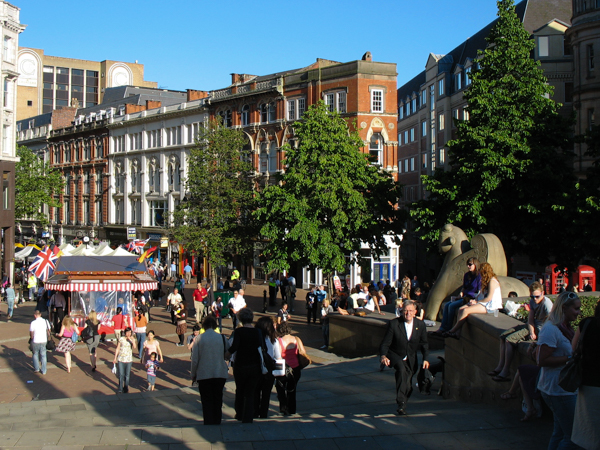 On another evening the city hosted a street fair in the historic downtown. There were booths selling food and souvenirs, street actors, buskers and the like. The locals came out to enjoy the action as well.

Later in the evening there were concerts and plays.

We attended a concert by the Treorchy Male Choir from Wales presented in the Town Hall. This beautiful facility had only recently been reopened after a major overhaul. The organ is one of the largest in England.

Eventually, however, the conference was over and we traveled to Southampton to catch the QMII for our voyage home.