The following day we visited the Chilean Research Station at Waterboat Point. This was our only excursion onto the Antarctic mainland and we almost missed it due to ice. Here we visited Gentoo penguins.

It was sometime when we were in Antarctica that another scene in our internal drama unfolded. Our problem child, let's call her 'Leona,' shared an assigned cabin with another lady in the group, whom I'll call 'Patty.' Patty had been intimidated by Leona the entire trip and couldn't take it anymore. She went to our fearless leader and asked for a different room. He wasn't encouraging, but agreed to ask the ship's staff. The ship's staff wasn't inclined to cooperate until they heard that Patty was trying to escape Leona. Turns out Leona had also been making the ship's staff miserable by demanding this-and-that including a room upgrade, for no extra charge, of course. They were DELIGHTED to give Patty an upgraded room. Patty was thrilled. Leona was predictably and vocally not. As the stomach churns.... 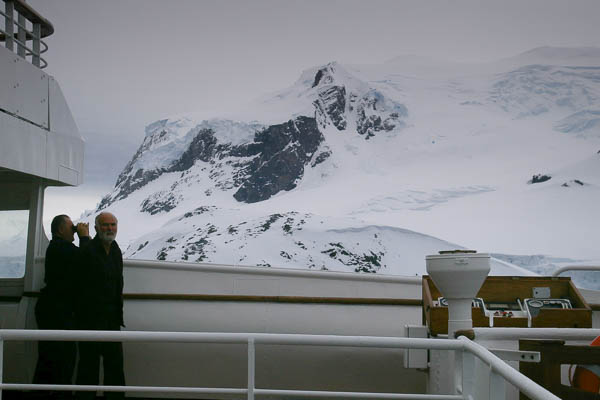 Ships cruising in Antarctica are required to have ice pilots, experts in reading the ice to determine if a ship can safely pass through. This determination was particularly critical for Discovery, which was not classified to handle ice in any significant amounts. 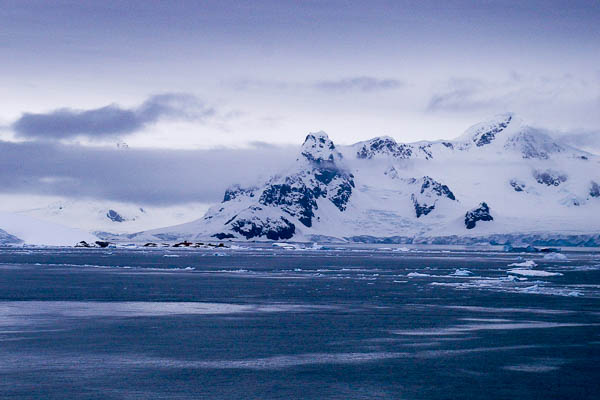 So near and yet so far.

Although it doesn't look like much, there was too much ice to allow our ship this approach to the landing indicated by the low red buildings on the left of the image.

On to Plan B, which involved a two hour detour to access on the other side. We weren't guaranteed success even then. 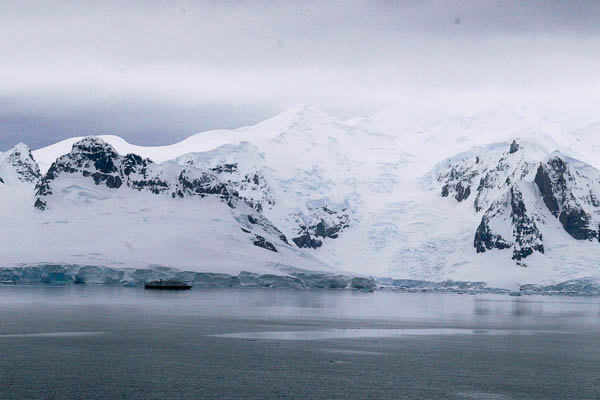 On our way we passed another, much smaller cruise ship.

This may have been the Corinthian II, which made several cruises to Antarctica in the 2008-09 season. If so, we took this ship across the South Atlantic in 2010 and again under a new name in the Baltic Sea in 2019. 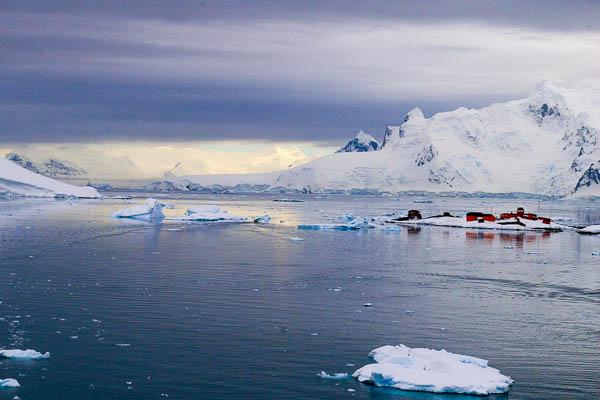 We have arrived at our destination and sent out a Zodiac scout team to prepare a landing. To my landlubber eyes, this looks just as icy as the prior approach. Never mind; it worked. 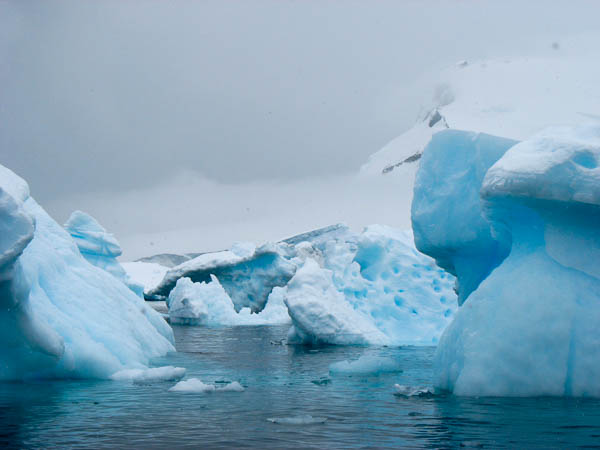 When it became time to land, the Zodiacs threaded their way through a mass of small icebergs (bergy bits & growlers). Given that 90% of the ice is underwater, one of these could do serious damage to a Zodiac, and its passengers, should it decide to roll. I'm glad I didn't know that at the time. 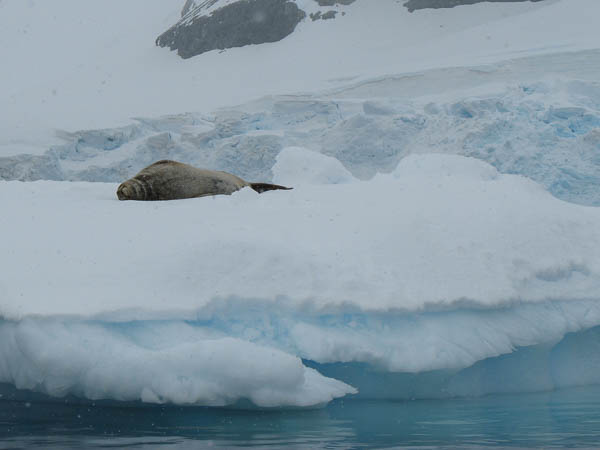 One of the bergy bits provided a haul-out spot for this critter. This is a true seal, probably a crab-eater seal, less likely a Weddell seal.

Fur seals are actually sea lions. They have fur tufts at their ears and can use their hind flippers as "feet" when on land.

The naturalists on the cruise jokingly referred to the seals as "slugs on ice." 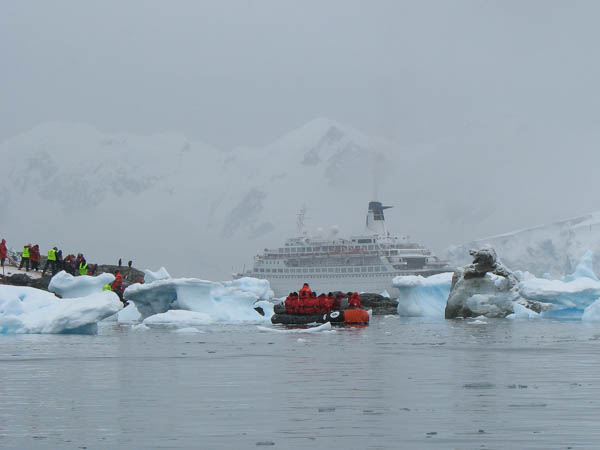 The Zodiacs disgorged their passengers in an orderly fashion. Ship's staff were positioned to help us scramble up the rocks to level ground. 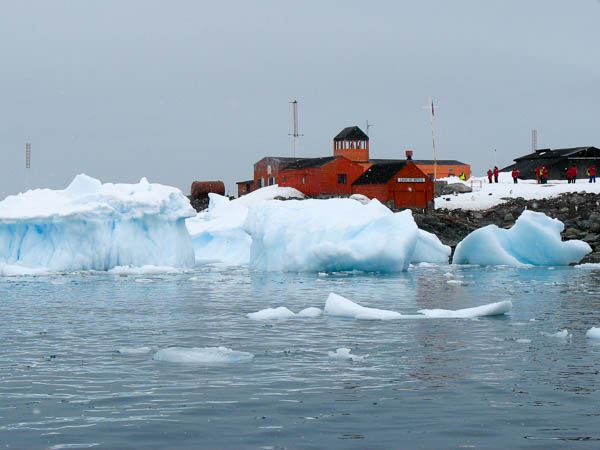 Our turn is approaching. "Casa de botes," nearest to the shore, translates as boathouse.

It has begun to snow. We frequently encountered snow showers while in Antarctica. 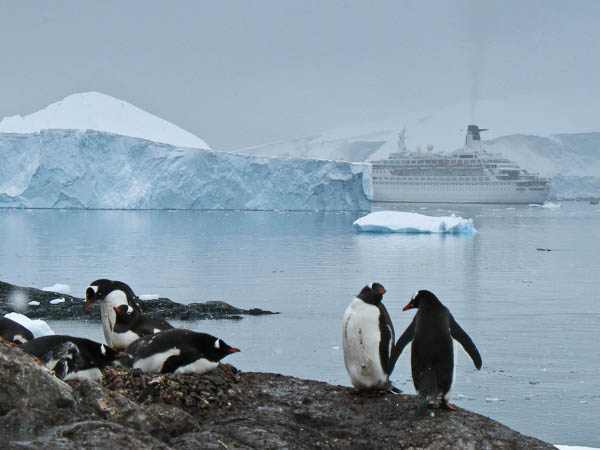 We found out why the ship never dropped anchor and kept the engines running during our shore excursions. The strong tidal current drove the large berg on the left toward the ship, which had to dodge out of its way. The perspective makes the berg look larger than Discovery. It wasn't (at least the part above water wasn't), but it was large enough to do significant damage had it caught the crew napping.

It is not uncommon for cruise ships to run into trouble in these waters. 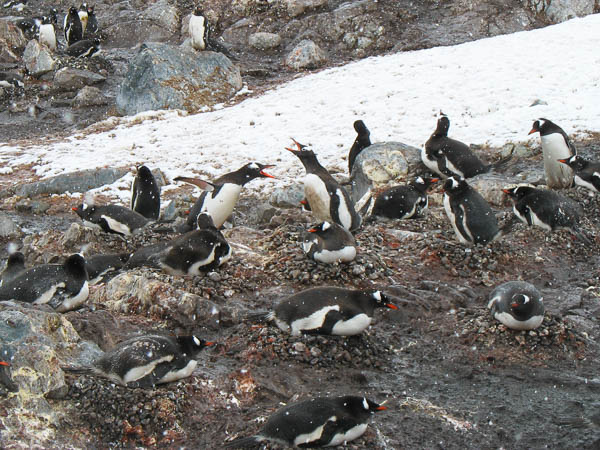 Even though the penguins live in cozy colonies, they are territorial. When another bird gets too close, a dispute ensues. Although these can sometimes turn violent, they are mostly just noisy. Very noisy.

The nests are collections of stones. I almost said "simple collections," but the penguins build them "just so." Sometimes penguins will steal desirable, in penguin estimation, stones from neighbors to enhance their own nests.

Parents take turns brooding the eggs and hunting. Once the chicks are hatched, one parent guards the babies while the other hunts. Gentoos typically lay two eggs and will rear both chicks if they can. 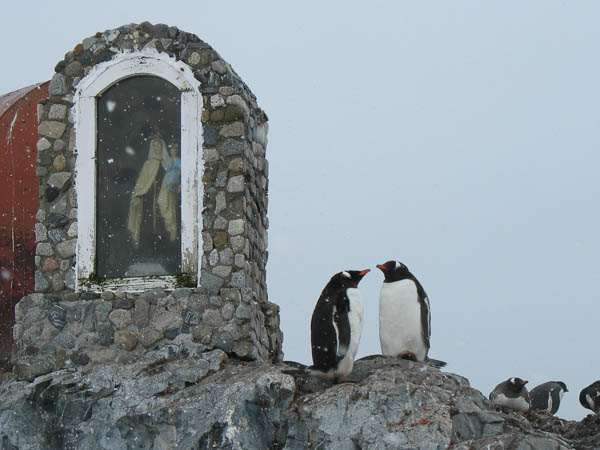 As at Arctowski, there is a small religious monument. 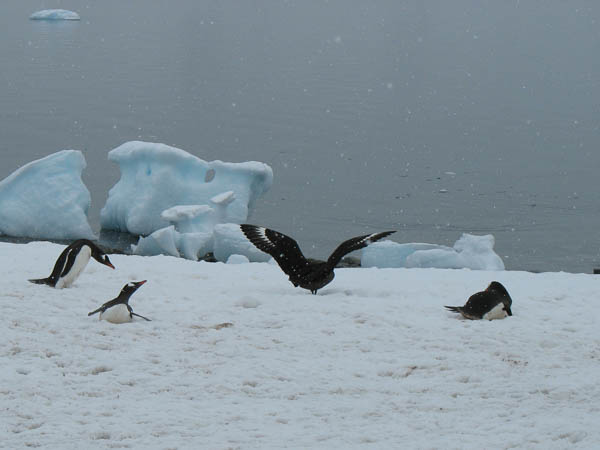 The brown skua is a formidable predator of eggs and chicks, but does not usually take on an adult gentoo penguin. These penguins didn't appear intimidated. 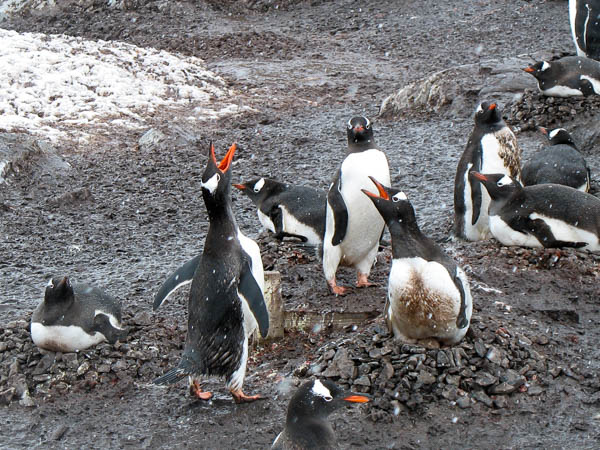 The hunting parent has returned home for a changing of the guard. The mates identify each other by their calls. The returning parent will settle in to brood the egg(s) while the brooding parent gets its chance to hunt. 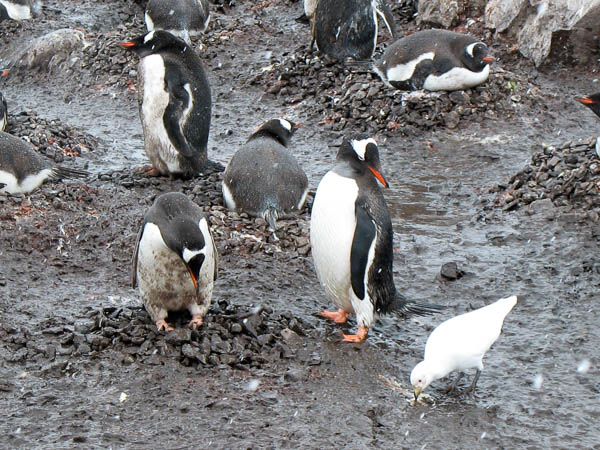 This is not a happy reunion. The brooding bird has lost the eggs, presumably to predators. It's easy to anthropomorphize their expressions to embarrassment and disdain. It looks like the dirty bird is offering excuses and the returning bird isn't buying them.

The white bird is a snowy sheathbill. These birds are not just scavengers but also pair up to torment penguins and steal their eggs. 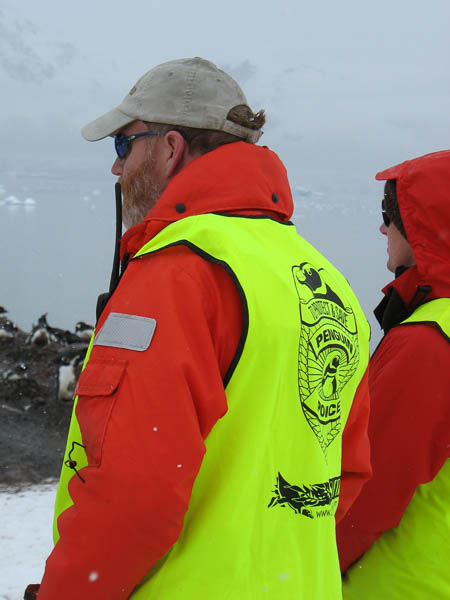 The ship's staff dons "Penguin Police" vests for the shore landings. They made sure we didn't disturb the birds and also pointed out anything unusual.

One unusual sighting at this location was an albino penguin. Alas I missed it.

After every shore landing, staff scrubbed and sanitized our boots to prevent our spreading disease from place to place.

I'm sure it was not a coincidence that it also kept us from tracking penguin poo onto the ship. 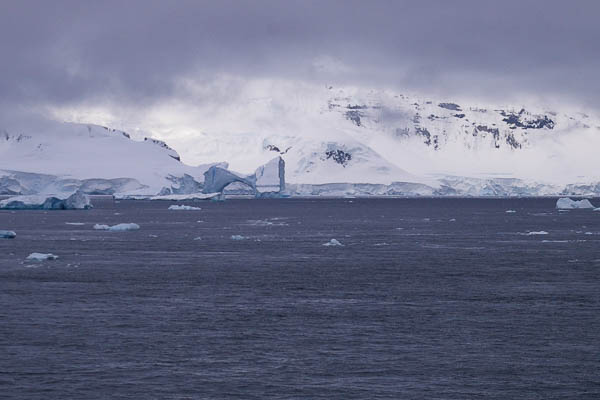 As noted earlier, the original itinerary called for a cruise through the scenic Lemaire Channel after our stop at Waterboat Point. Yet again this plan was stymied by too much ice for Discovery to proceed safely. Plan B was to cruise the nearby, but larger, Neumayer Channel.

The fraught relationships that had developed on this cruise came to the fore again. I had kept an ear open for ship announcements and skipped dinner so that I could be on deck to see the sights. Our leader did not make a special announcement to any of the other Elderhostlers so they missed the scenery and were not happy about it.

It was late in the day and foggy so the scenery was not what it might have been. There were few dramatic vistas. The berg with the arch was the high point.