After a few days in northern Jordan we traveled to Petra. A single day is far too short a time to visit this enormous, fascinating and beautiful site. Too many people think the "Treasury" is all there is to see at Petra. They couldn't be more wrong! Our group rebelled against the schedule and insisted on at least another half-day at Petra. It still wasn't enough, but it was better. If you are privileged to travel there – plan on spending three nights if not more.

The valley where Petra is located is called "Wadi Musa" or the valley of Moses. According to one tradition, most of the forty years the Israelites spent in the wilderness was in the vicinity of Petra. The mountain-top, Jebel Haroun, where tradition says that Moses' brother Aaron was buried, is within sight of the road into Petra.

The mysterious Nabataean people first used Petra as a place of burial and carved elaborate tombs out of the sandstone. Later they build a city there, which prospered into the 7th century AD. Eventually they disappeared, probably due to changing trade routes and increased seismic activity. 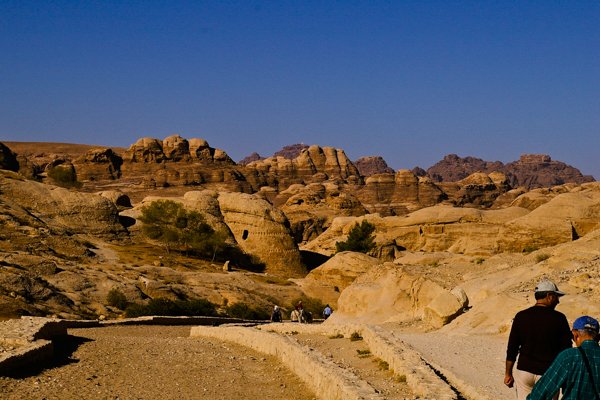 It is a long walk, well over a mile, from the hotel into the city of Petra, which is protected on all sides by these sandstone mountains.

The tiny white dot barely visible on the fartherest mountain in the center of the photo marks Jebel Haroun.

To our left as we walk in is the road where you can hire "chariots" or ride horseback. 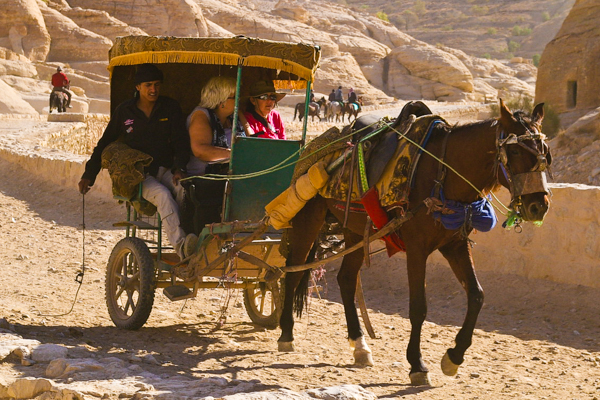 The chariots looked fiendishly uncomfortable – cramped accommodations and no springs to cushion the rough and uneven road Yet our guide strongly recommended that we reserve them for our walk back to the hotel after a day of sight-seeing!

I don't believe anyone in the group took him up on it. 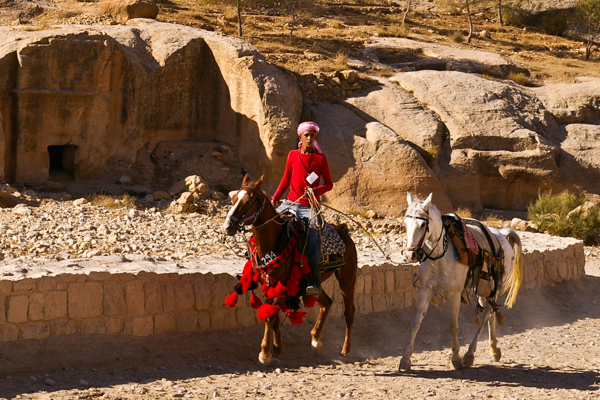 One could also hire a horse to ride. Ridden horses are no longer allowed in the siq due to safety reasons, so you can only ride as far as the entrance, about 1/3 the distance to the city.

In general the horses appeared to be reasonably well-cared-for.

Shanks' mare worked for me! 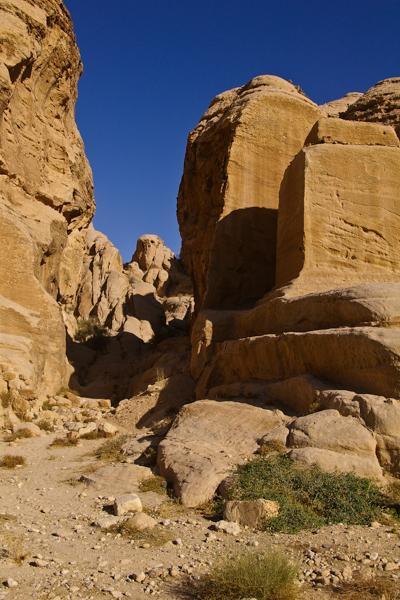 "Djinn blocks" line the road toward the siq. These are solid squared-off structures believed to be funerary monuments. (The djinn are more commonly called Genies in the west.)

These blocks have a kinship with the aniconic or non-representational idols that are seen elsewhere in Petra. There is more about them below. 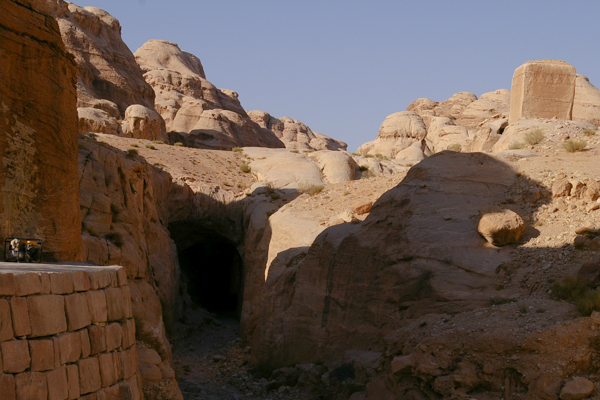 The Wadi Musa, which runs through the valley toward Petra, is diverted at the entrance to the siq. From here it takes a path around the mountains to reappear in the center of the city.

According to legend Moses created this ephemeral stream when he struck the rock as described in Numbers 20.

The djinn block shown here has a stepped pyramid pattern that is common on the Nabataean memorials. 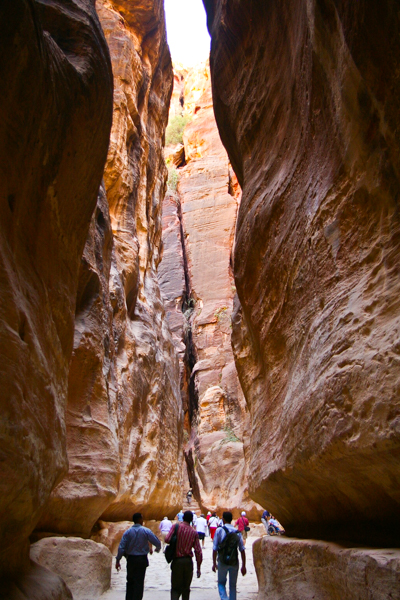 For about a mile we traveled through the cleft in the rock that led to the main city.

Nabataeans carved the channels seen on either side. They channeled excess water to cisterns contained in the city. There were also catch-basins throughout the siq itself.

As might be expected of people who thrived for centuries in an arid region, they were masters of water management.

To get an idea of scale, click for a Petra map. (If you want to keep the map around as a reference, you may right-click the link to open it in a new browser tab or window.) The siq is reference number "3" on the map. 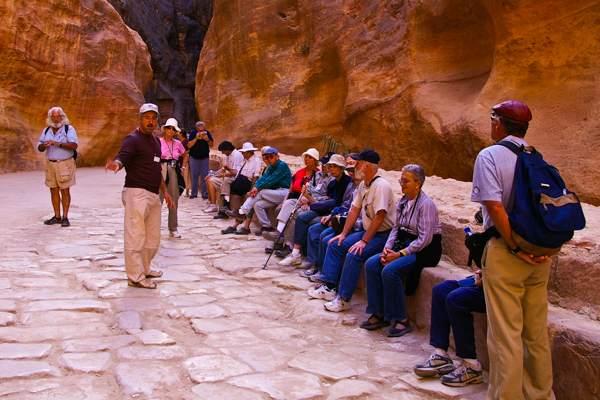 We had a brief respite while our guide Zuhayr gave us an overview of the history of the place.

The pavement dates back to the Roman times.

As we walked through the narrow gorge we had to be on the lookout for approaching chariots. They came along at a fast clip and there wasn't always much room to get out of the way.

As noted above ridden horses are no longer allowed. Apparently the "guides" would gallop back pell-mell to pick up another tourist. It led to many accidents.

The narrow siq opens up dramatically into a plaza where the magnificent monument called al-Khazneh or the Treasury may be seen.

The name comes from the legend that the pharaoh pursuing the escaping Children of Israel (or pirates or corrupt priests) stored treasure in the urn at the top of the center structure. In fact the urn is solid.

Such monuments were carved from the top down. The builders must have had the concept in mind from the very beginning.

The plaza is still raised above its ancient level. The structure would have been even more imposing.

In spite of what you may believe from the Indiana Jones "Last Crusade" movie, the inside is simply a large plain empty room. 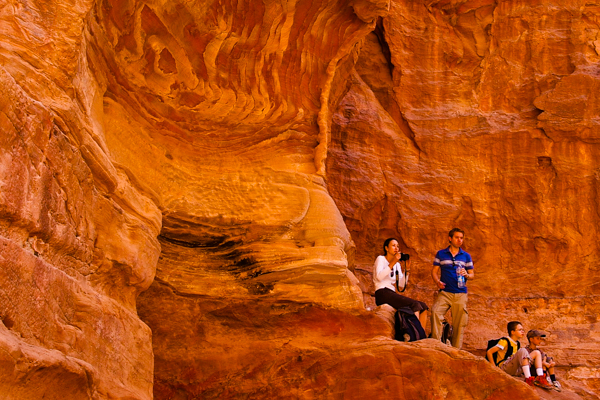 The large plaza is full of vividly colored rock and caves. During the centuries that Petra was abandoned, the ingenious water control structures built by the Nabataeans fell into disrepair and floods eroded much of the sandstone – destroying many of the tombs. 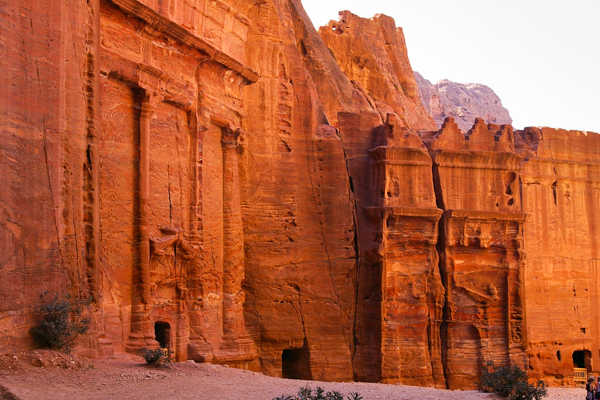 Many visitors stop at the Treasury unaware that there is more - much more – to Petra.

We passed these eroded monuments. The giant crack in one is evidence of the seismic activity found so close to this northern section of the Great Rift Valley.

Note the repeat of the stepped motif on the top of the cracked facade.

Every respectable Roman-age city had to have its theatre and Petra was no exception. The seating is carved from the living rock.

We pondered whether the openings in the back wall were eroded tombs or early versions of luxury sky boxes. 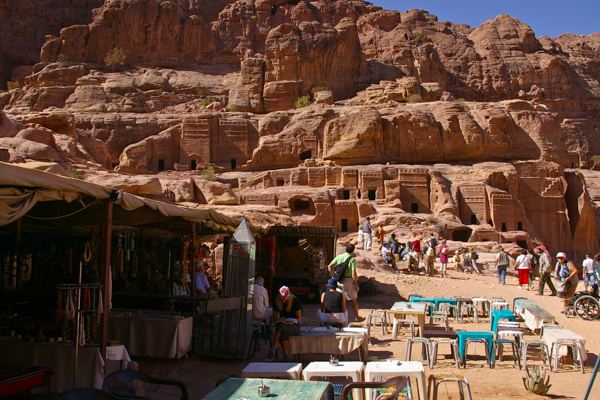 As we enter the city proper, we come upon the requisite tourist traps.

When the government of Jordan began to see the potential of Petra as a major tourist destination, the resident encampment of Bedouin became a challenge.

In a compromise solution the government built a new village, and the relocated residents received exclusive concession rights. 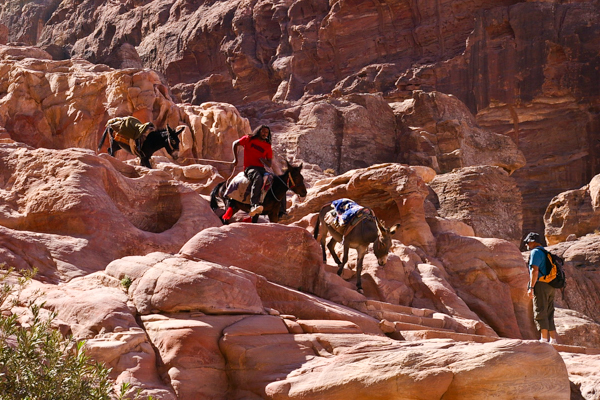 Anyone familiar with the Biblical history books knows about the ongoing struggles against the "high places," which were dedicated to the worship of foreign gods.

Petra has its own high place reached by a steep stair. We didn't have enough time to clamber up (it's on the list for next time), so this is just the beginning of the road.

Those who don't want to climb can hire donkeys for the trip up or down, but we were told it can make for a pretty exciting ride! 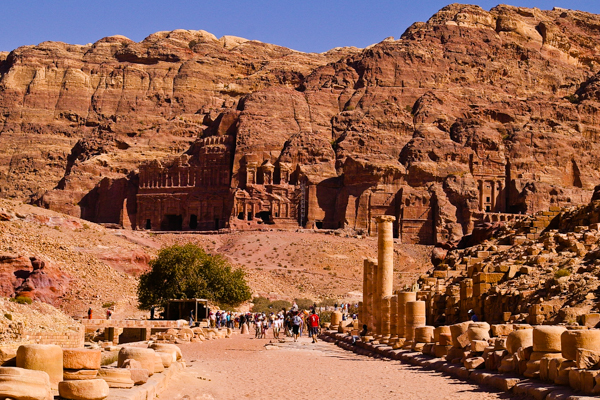 Anyone who has been looking at these albums is familiar by now with the Roman cardo. Here is the Petra main drag. The trees on the left are the terminus of the diverted Wadi Musa shown above. In ancient times there was a nymphaeum located here where people could come for water.

I was fascinated by the remaining columns of the structure called the "blue chapel" after the color of the stone used in the columns.

The other feature that attracted me was the shape of the capitals – a distinctive Nabataean type. For a closer view, check this link for the blue chapel.

Three Byzantine churches were excavated by ACOR, which we visited while in Amman. During the construction of a protective cover over the ruins of one of the churches, a cache of burned documents was uncovered. It remains the largest single collection of Nabataean script.

The largest church had fabulous mosaics, but I couldn't get really good pictures. Check the link. 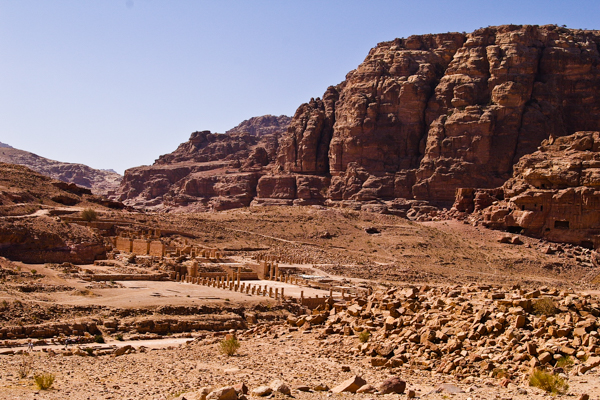 This picture gives an inkling of the scale of Petra. The large ruin in the center, commonly called "The Great Temple," (see below) is huge. The rubble-covered areas would have been residential and other buildings. They have since been destroyed by earthquakes and other natural disturbances. 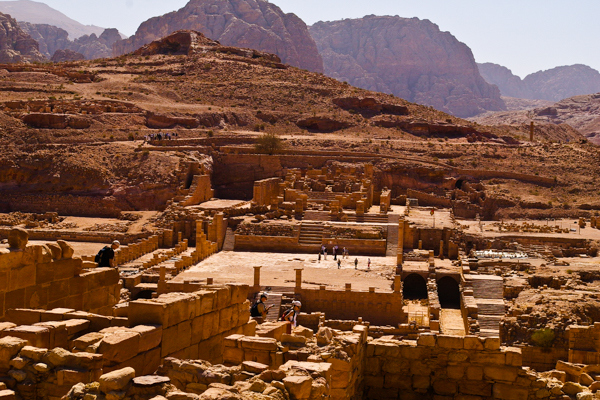 The folks at ACOR suggested that the "Temple" might have been a government or administrative building of some type rather than a place of worship.

The upper level contains enclosed theatre seating that was apparently added after the structure was built.

The tunnels on the right were probably covered storage areas. Large cisterns and a water capture system are also included.

Originally the buildings would have been stuccoed and painted. Traces remain. 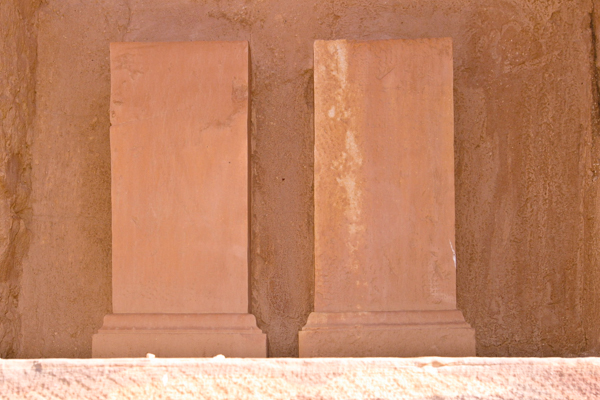 Earlier I mentioned aniconic idols in connection with the djinn blocks. Here is one example of a pair of idols in a niche alongside the temple above. There were many others here and there. Sometimes they had rudimentary features but usually not. Often they were the same size, as here, but sometimes one was larger than the other. Except for the djinn blocks, they always seemed to come in pairs.

The Nabataean pantheon was complex and has been the subject of much speculation. 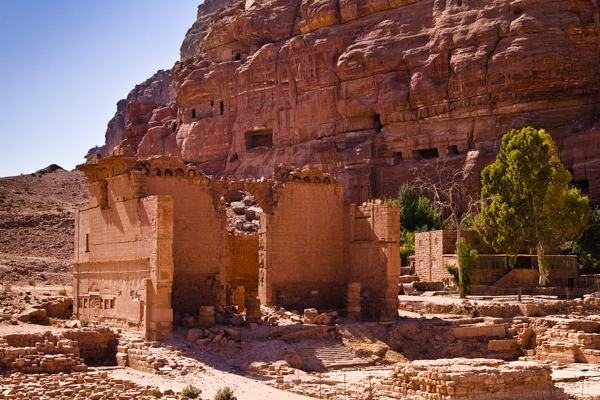 This structure is indisputably a temple! But to whom? The local goddesses or Dushares?

According to legend it was the palace of Pharaoh's daughter.

The fact that it has survived as well as it has in this seismically active location is a testament to its builders. We were told that modern engineers don't wish to undertake a "restoration" because they feel the ancient technology is probably better than we could do today!

Our next stop was a crusader castle in the process of restoration. 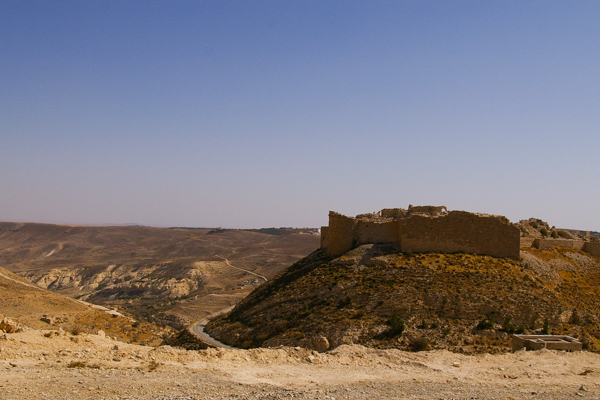 As noted above we negotiated an extra half-day at Petra. In return we traded a visit to the Karak crusader castle. Our guide was determined that we should visit a crusader castle, so we visited this one at Shobak.

Believe it or not, this is considered a fertile valley. I would like to visit Jordan someday in the spring at the end of the rainy season to see the desert in bloom. 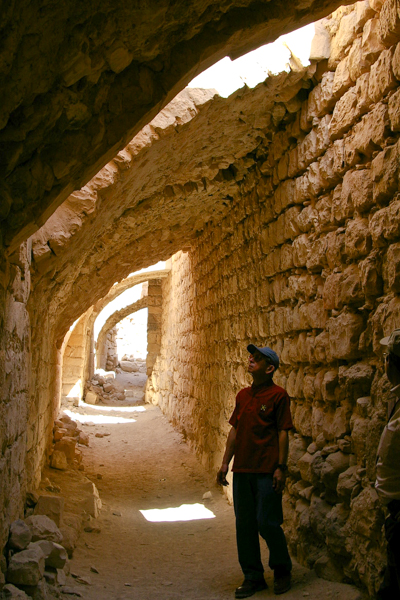 Shobak is said to be the earliest of the Trans-Jordan castles. It had a unique feature, subterranean access to a reliable water source, which was invaluable in a time of siege. I would have loved to visit the tunnel to it, but it was off-limits as it was treacherous when new and well-maintained!

At present there are archeological teams actively working there, but there has been little restoration. We found it a fascinating place. 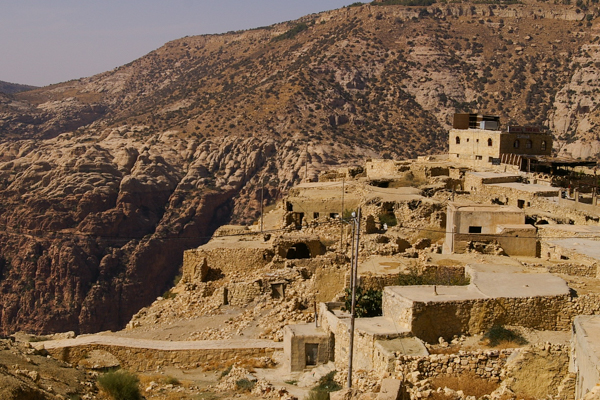 We also visited the Dana Biosphere Reserve. The village shown here at the rim of the canyon had been deserted for a number of years, but the government is hoping that tourism jobs will encourage the villagers to return. There was quite a bit of reconstruction in progress.

This wadi reaches from Dana to the Dead Sea, which is out of sight to the left. There are hiking trails throughout the preserve and we could even see a hiker in the canyon - his or her tiny figure dwarfed in the immensity of the surroundings. 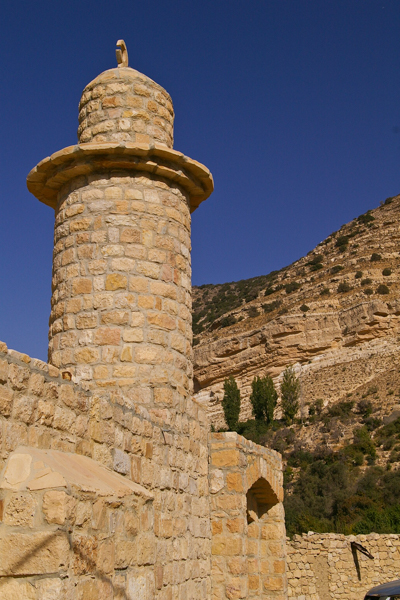 This minaret of the mosque in Dana village seems to be appropriate for our good-bye to Jordan. It is a lovely place and I'd like to return someday to see more of the countryside and also to meet some of the inhabitants.

Organized tours are wonderful in many ways, but when we travel in a less controlled fashion we interact more with the local folks – on public transportation, at the laundromat, in small restaurants. This is something we missed here.

You may click your "back" button to return to the index page.