If you haven't already seen it, check out our visit to Galilee.

After leaving Galilee, we proceeded to the seacoast. Our goal was to drive down the coast to Tel Aviv with stops along the way. It was a graphic example to us of how small Israel really is: we drove from the north, across the country and down to the southern-most point on the seacoast in less than a day including two extensive stops in Acco and Caesarea. 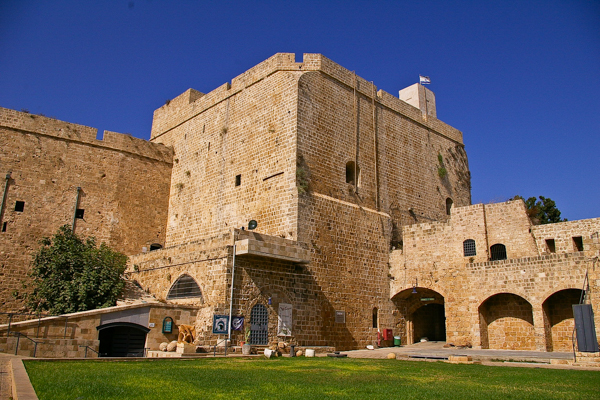 Our first stop was Acco, also known as Acre, among other names. The Citadel, shown here, was built by the Ottomans over top of the old Crusader city. The Ottoman fortress was used as a prison, most recently by the British Mandate. We visited a museum installation in the prison. 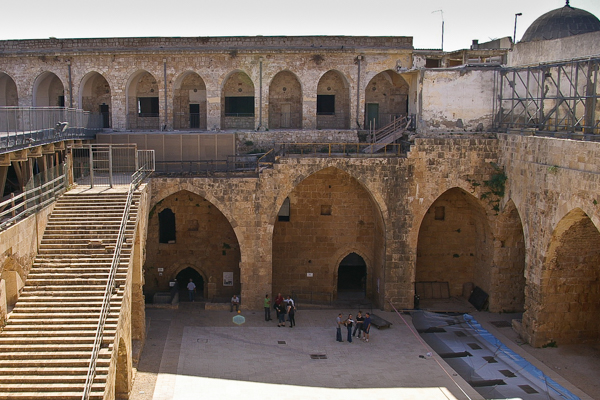 The Knights Hospitaller fortress in Acco lies underneath the Ottoman citadel.

Prior to its restoration this courtyard was filled with debris. Underneath the stairs and behind the arches are the portions dating from crusader days. The location of the British prison can be seen in the upper right of this image. 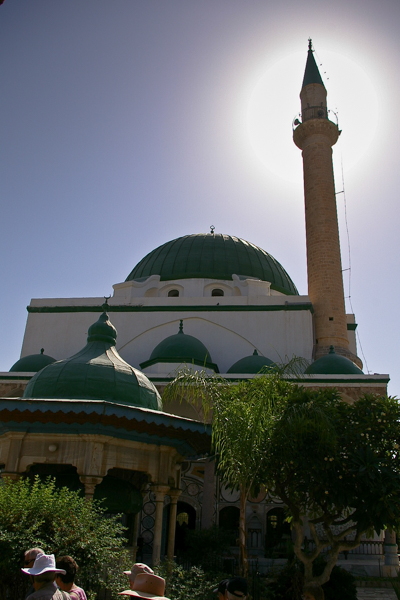 We never did get to see the inside of a mosque while we were on this trip – either in Israel or in Jordan.

Non-Muslims are not allowed to enter the mosques on the temple mount. We were hoping to visit this one, the Al Jazzar Mosque, but we arrived just as services were beginning so it was not to be.

The small gazebo-like structure contains places where the faithful can wash prior to entering the sanctuary.

This isn't a great picture, but it gives an overview of the ancient Caesarea Maritima harbor, our next stop. The extensive man-made harbor, the remains of which can still be seen, is the largest known use of hydraulic cement during Roman times.

Herod's palace, which you will see below, is not on this model. It would be toward the "bottom" of this picture.

There was another Caesarea at the time: Caesarea Philippi, which was located near Mt. Hermon. 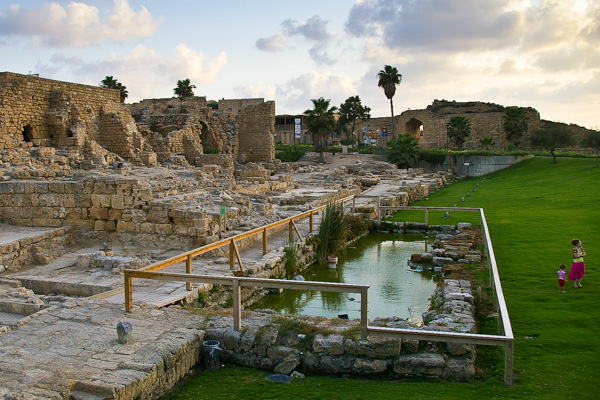 This is the excavated portion of what had been the docks adjacent to the inner harbor. The buildings shown on the model may be seen in the ruins here.

The apostle Paul was held in Caesarea for some years before being sent to Rome for trial after he, as a Roman citizen, appealed to Caesar.

This fisherman is standing in the area between the outer and inner harbors. The remnants of the original breakwater can be see behind him. 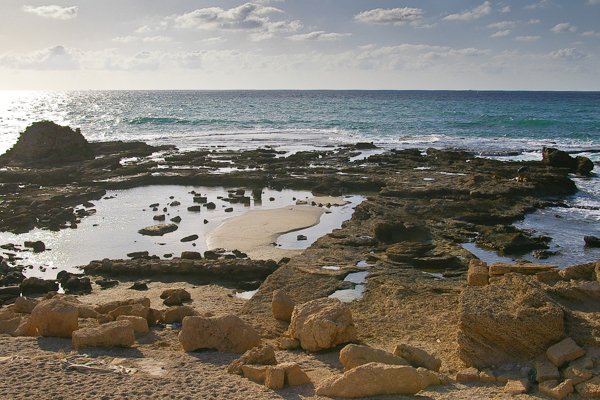 Herod the great, an enthusiastic builder, constructed the harbor and a large palace on the sea at Caesarea. This is all that remains. It is now a favored spot for fishermen.

One of our group asserted that after two weeks of visiting places that were "said to be" this or that, it was a great relief to see something that was definite. This IS Caesarea and this IS Herod's palace.

The only "carved in stone" identification of Pontius Pilate as governor of Judea was found at Caesarea. 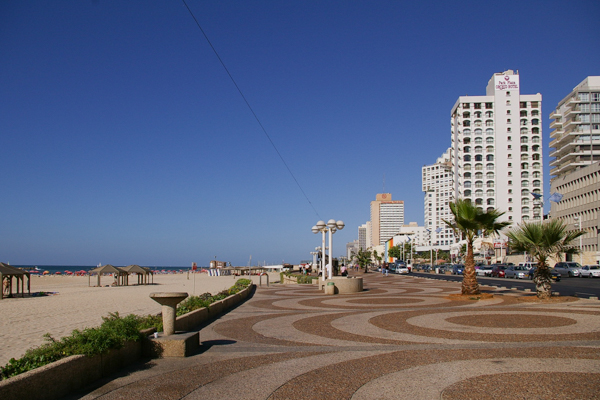 Our next stop, the last in Israel, was Tel Aviv. The name means literally "Hill of Spring." It's the Hebrew translation of Altneuland, a book written by Theodore Herzl, the father of modern Zionism.

Our hotel was located along this beach. My ignorance of Israel before this trip was such that I had not realized that Tel Aviv was a seacoast resort. Duh! 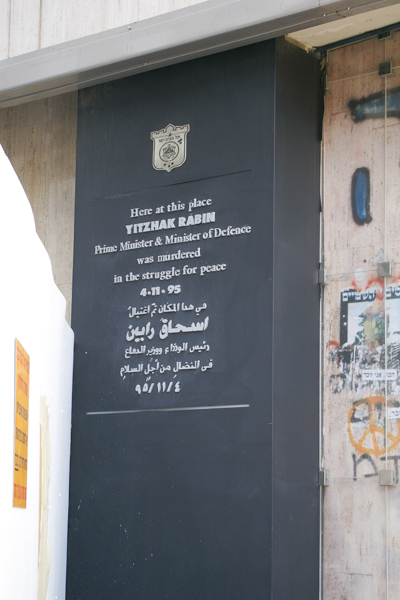 One of our first stops in Tel Aviv was Rabin Square, the plaza where Yitzhak Rabin was assassinated during a peace rally celebrating the Oslo Accords. His killer was an Israeli ultra-nationalist.

I am reminded of Isaiah 30, verses 9 & 10: For this is a rebellious people, false sons, sons who refuse to listen to the instruction of the LORD; who say to the seers, "You must not see visions"; and to the prophets, "You must not prophesy to us what is right, speak to us pleasant words, prophesy illusions." 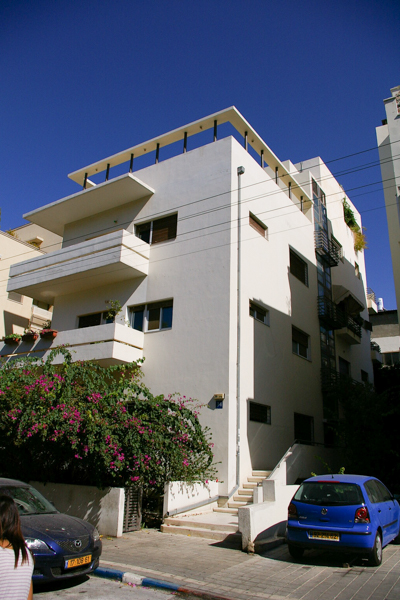 We were not aware that Tel Aviv has the highest concentration of Bauhaus architecture in the world. It has been declared a UNESCO World Heritage site. The Bauhaus school in Germany closed with the rise of the Nazis and many of the students immigrated to Israel for safety.

There were numerous striking buildings. This is the one that took the best picture. Since this is a protected area, it is not possible to demolish smaller residential buildings to build larger apartment complexes. There is, however, a desperate housing shortage, so the residents take the modern approach of "building up." The street view has the original three levels, but a portion of the original roof garden has been dedicated to an additional smaller unit. The proceeds of selling that unit can help pay for maintenance of these aging structures.

Unfortunately the International Style, as it was called in the US and which originated in cooler parts of the world, isn't particularly suited to this hot climate. The buildings were not designed with efficient airflow in mind. Nevertheless I have always loved it. Perhaps coincidently my elementary school is now a designated Mississippi Landmark as one of the state's premier International Style structures.

The following day was the Sabbath and the city was crowded with families out walking and visiting. This was how we spent Sundays when I was growing up - except that we went for a Sunday drive instead of a walk. In those days there was still a concept of a "day of rest."

This park is in the "old town" of Tel Aviv.

Although much of the city is composed of modern skyscrapers, there are still some down-at-heels neighborhoods. I seem to remember that this was an artists' quarter.

After our stay in Tel Aviv, we said goodbye to about half of our group while the rest of us boarded a bus for the trip back through Jerusalem and the desert to Jordan.

This is another Bedouin encampment in the hills.

We will be entering Jordan over the Allenby Bridge. There are political difficulties with this particular border crossing because we enter from the West Bank rather than from Israel proper. 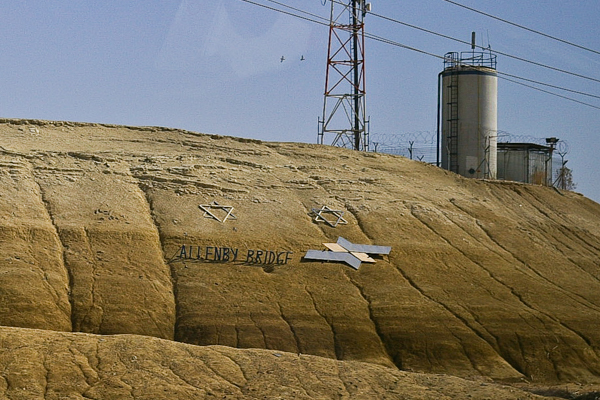 I was unable to get a decent picture of the bridge itself–this is the approach.

Since we were entering from the West Bank, we received no individual visas.

But at least we CAN travel to Jordan from Israel – unlike Syria or Lebanon, which will not accept a passport that has Israeli stamps.

We invite you to continue our journey to Jordan.