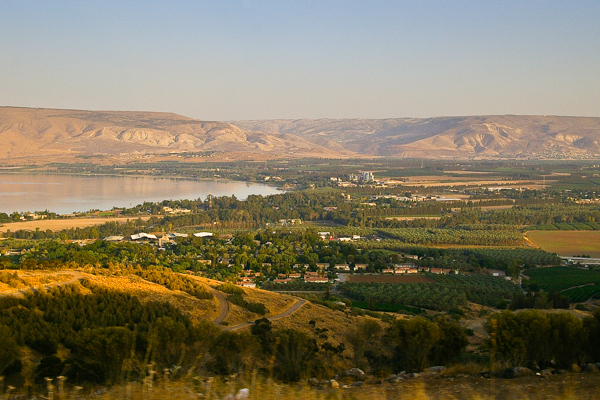 The valley of the Jordan River is the most fertile location in the area. This picture shows Lake Galilee (or Kinneret) to the left and the mountains of Jordan in the background. We were to visit those mountains shortly.

This fertile plain is shared between the two nations. As noted in the Dead Sea discussion – all this greenery comes at a price. By the time the river reaches its outlet into the Dead Sea it is barely a trickle. 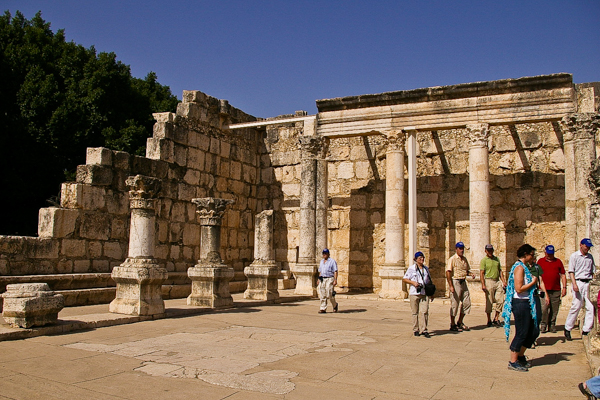 Capernaum is where Jesus and His disciples lived during much of His ministry. A large church is built over what is believed to be Simon Peter's house.

This synagogue, known as the "white" synagogue, dates from well after Jesus' day, but excavations indicate that it may have been constructed over the earlier synagogue in which Jesus himself taught. There is more about it at the link above. 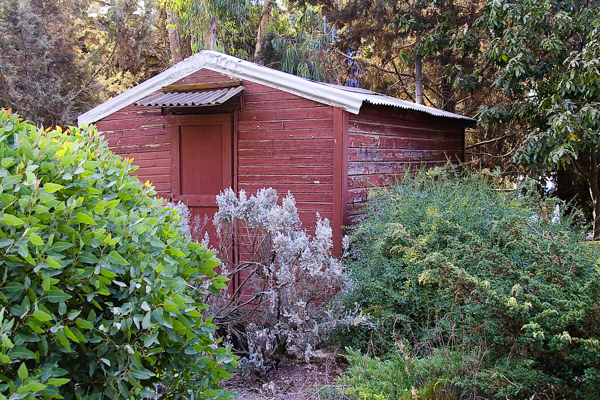 While in Galilee we stayed at the hotel run by Kibbutz Lavi. While there we had the opportunity to chat with residents and take a tour of the area and their furniture factory.

At the time the kibbutz was founded the land was nothing but rocks. Residents carried soil in buckets from the valley to the hill top. This is one of the earliest residence buildings preserved as a memorial.

This is a modern residence.

The kibbutz is run on strictly socialist principles. Everyone contributes his or her income and everyone receives what he or she needs from the common funds – even if those needs are extraordinary. The resident that we talked with described how her son, who was severely disabled, received the best of care throughout his life at no cost to her.

She herself was encouraged and supported in her career as a musician although it didn't pay especially well. 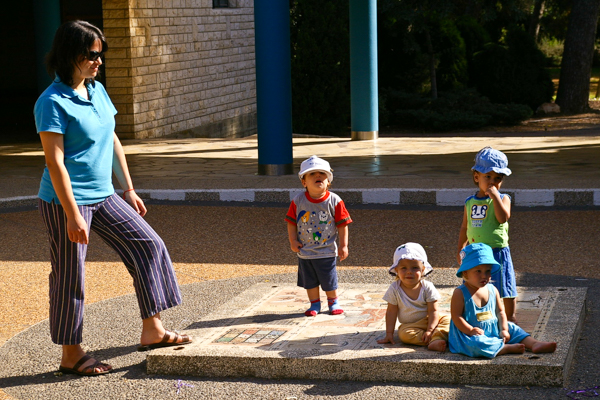 Many of the early kibbutzim practiced communal child-rearing in which the children lived in separate children's houses and only visited with their biological families for part of the day. Our contact said that this was extremely unpopular with parents, for all the reasons you would imagine, and didn't last long.

Nowadays this concept only extends to the provision of childcare for working parents. 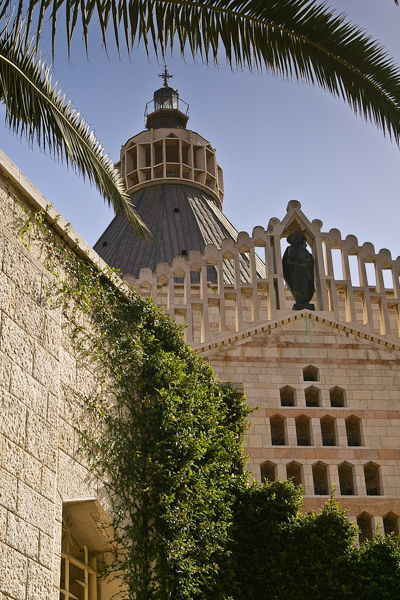 Our visit to Nazareth included the Church of the Annunciation built over the remains of earlier ones dating back to the 3rd or 4th century AD.

As is so often the case in Israel, controversy arose over here in the late 1990s with the unauthorized construction of a mosque that seemed to be designed to block access to the Church. Eventually the incomplete mosque was demolished, but controversy was still simmering at the time of our visit. I don't know the ultimate resolution.

It is worth noting that the overwhelming majority of Christians in Israel are Arabs, and in addition to being an international shrine, this is an active parish church. 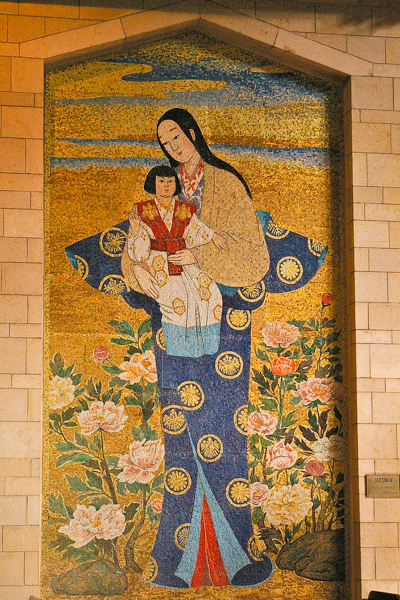 The church was adorned throughout with mosaics depicting the annunciation or, as in this case, the mother and child. The mosaics represented many different countries and cultures – this one being Japanese. 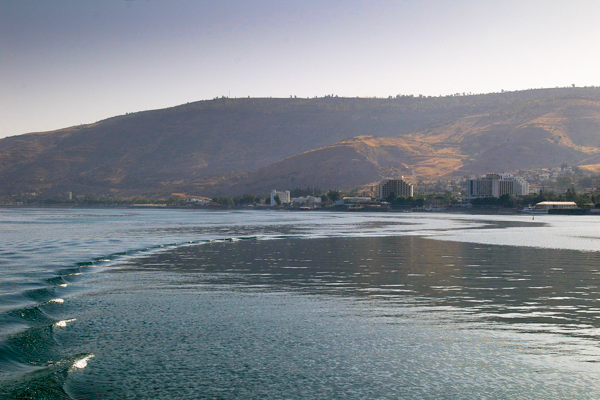 We took a brief cruise on the "Sea of Galilee" from the city of Tiberias. Thankfully we did not experience any of the sudden storms for which the area is known and which figure in the Biblical stories of Jesus. 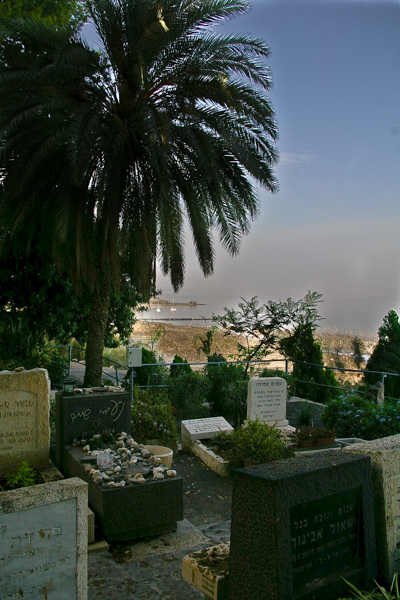 Another place we visited alongside the lake is the Kinneret Cemetery, which has the status of a pilgrimage destination for Israelis. Many famous early settlers are buried here.

The grave with the many rocks is that of Naomi Shemer, a much-loved composer and song-writer. She was born in the nearby Kvutzat Kinneret, one of the very early kibbutzim founded in 1913. The rocks are placed in homage. Many graves were so decorated.

We spent some time in Safed, which is a center for the study of the Jewish Kabbalah and also has a thriving artist's colony. The local specialty is microcalligraphy.

The town was very picturesque. Jim and I had a good time walking around on our own and had a fantastic lunch at a little storefront operated by a young Yemeni immigrant who made a mean veggie "pizza." I regret not getting a picture of him since he was also quite picturesque!

Mt. Hermon lies along the border separating Syria and Lebanon. During the Six-Day War Israel captured the Golan Heights and has continued to control the southern slopes of Hermon as well as the rest of the high country. The top of the right-most peak is bristling with monitoring equipment used to keep tabs on military activity within Syria.

We were amazed that there is a ski resort on the mountain.

Mt. Hermon is one of the sites proposed as the Mount of Transfiguration discussed in the New Testament.

When I read the news about "settlements" on the West Bank or other Israeli encroachment on the territory of others, I never thought about a winery in that category.

Imagine our surprise to discover the Golan Heights Winery producing quality kosher vinifera wines on the Golan Heights. We wondered what they will do should the territory ever revert to Syria. 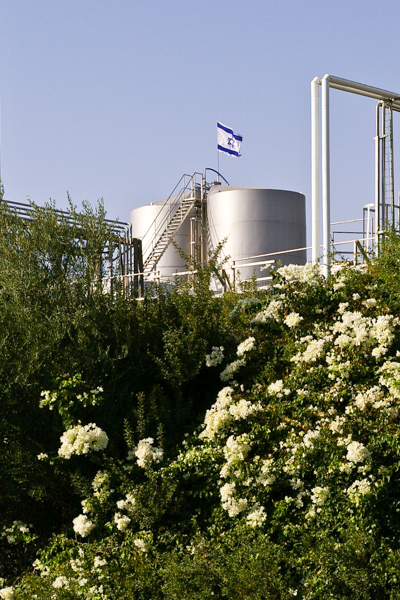 For that matter, when I have thought about kosher wine, I have seldom thought about vinifera wines. (With the exception of the former Witness Tree winery in Oregon, which once made yummy kosher wines, but that's another story.)

Alas, we can't get the wine locally. It is quite good – and a real conversation-starter! Our favorite of their three labels was Yarden.

We invite you to continue our journey to Acco & Tel Aviv.