On Our Own
Ironbridge – Part 2 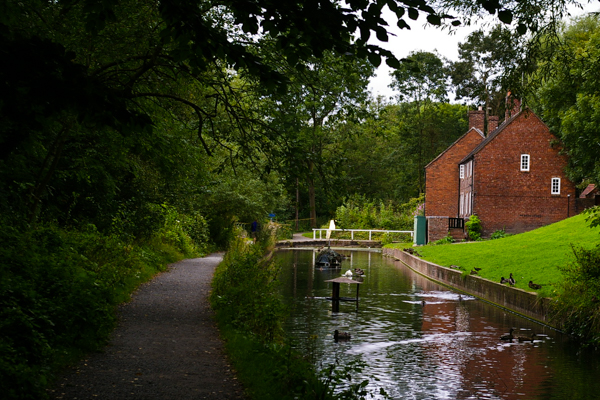 We crossed the Severn from Jackfield via a footbridge that was built as a memorial to soldiers lost in WWI. There was a system of canals to connect the mines with the river and with the furnaces. This is the lower level canal at Coalsport. 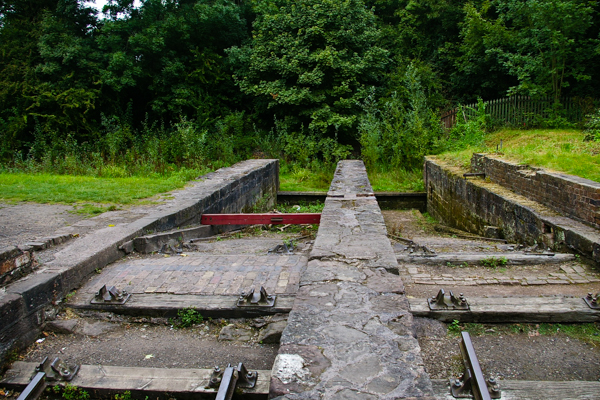 The upper canal from Blists Hill enabled access to the Hay Inclined Plane, a rail system that moved the canal boats between the upper and lower canals. The upper canal, which no longer has water at this location, fed this entry structure.

Workmen maneuvered boats onto the rails and used a steam engine to lower them down the incline. There were always two boats – one going up, one down to operate as counter-weights – a canal boat funicular! 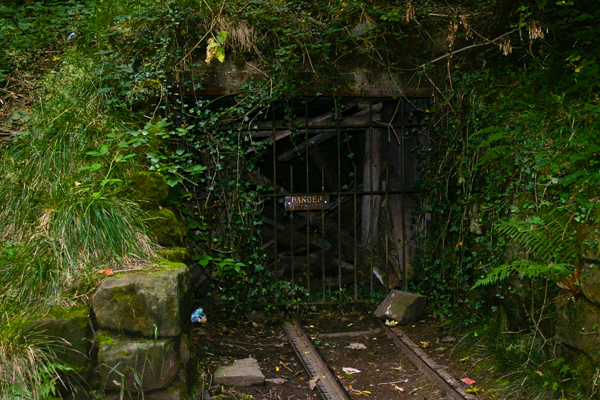 There were mines throughout the area. We saw some 'tracks" inset into a stone dock earlier. This particular adit shows a different style of old metal track. The flange that keeps the carts on the metal track is built into the track, rather than the wheels, and can be seen on the inner side of the tracks. 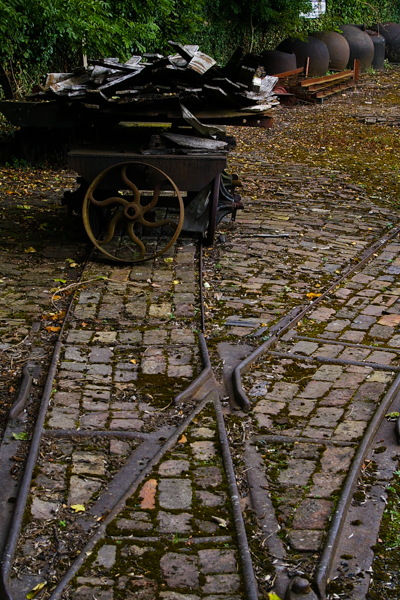 A junction of similar tracks plus a cart with the plain narrow wheels that runs on such a track.

Nowadays the flange is on the wheels as seen here, but that isn't what really keeps the train on the rails; it is the conical shape of the wheel. See this explanation by Richard Feynman.

I promise this is the last picture of RR tracks!

Although there were company-built homes for workers in the Ironbridge Gorge, this is an example of a squatter's cottage. It would have been built of found materials on land that didn't belong to the inhabitants. In many cases, such as this one, the tenants paid an annual fee to the landowner and after sixty (60) years the cottage and its land became theirs. In 1861 the worker Michael Corbett, his wife and six children, and a visitor lived in this small cottage.

Along the upper canal is the Victorian village of Blists Hill. There are demonstrations of old equipment and crafts. This old steam engine put on a good show. I love the huge flywheel in front.

This one is called the Trevithick Locomotive. According to the Ironbridge Museum, it was the first railway locomotive in the world. It was built by the Coalbrookdale ironworks in 1802. This is a replica. 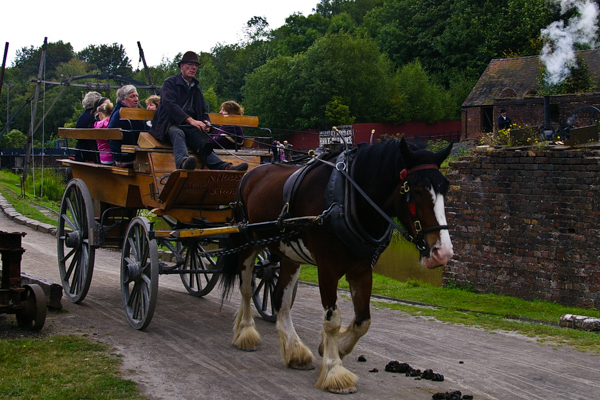 It was possible to get tours of the village using this traditional one-horsepower conveyance.

The horse carts were superseded by the steam engine, which can be seen in the background, and they have both been largely superseded by more modern technology. Steam engines are now limited largely to hobbyists and tourists. Horses still have an active industrial contribution on some farms and logging operations where more modern equipment may not be as efficient. As one rancher says: the horses always start, no matter how cold it is.

This is part of the paired steam-driven blowing engines named "David and Sampson." They are so large that I was unable to get the entire engine and beam assembly into one picture. Such engines provided the air flow or "blast" for a blast furnace. They were paired was to provide a steadier source of blast. One delivered air while the other was charged its cylinder. According to the write-up at the site, in such a configuration one engine would take the majority of the work. Which was it in this case? Sampson, of course.

The decorative style of these engines shows that their makers weren't strictly utilitarian.

The beams that ran off the cylinders shown in this picture were very, very long.

The old blast furnaces at Blists Hill remained in service until the early 20th century. A strike prompted their closing, but they had already become obsolete. The actual furnaces have been destroyed. What you see here are the platforms and servicing stations (the upper openings) used to feed the furnaces with iron ore, lime and coke.

We tried to extend our stay in Ironbridge by another day since there was much we had not seen in the two days allotted, but our B&B had already booked our room. Another item on our list of places to revisit.

On our way from Ironbridge to London, we decided to drive through the Vale of the White Horse. There are several white horses carved into nearby hillsides, but this one, the Uffington White Horse, is the oldest by far. It dates to the Bronze Age. Click the link to see how the horse looks from the air. Why was the horse constructed? Theories abound, but no one knows.

The low hill to the left of the picture is called Dragon Hill. Local legend has it that this is where St. George slew the dragon. The dragon's blood, so it is said, prevents grass from ever growing on the spot where he (she?) died. Except that St. George lived (if he lived) & died in Asia Minor. 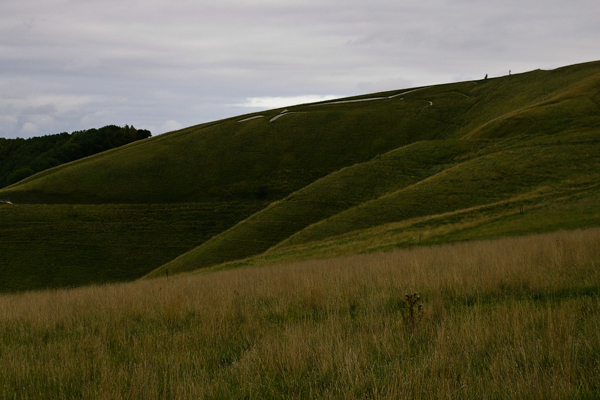 Here is another view of the horse. The bowl is called "the manger" and there is a legend that once each year the horse goes down to graze.

The outlines of the figure take regular maintenance. If the grass weren't cleared away from the chalk fill, it would soon grow over it and hide the figure. As best can be told, this figure has been maintained continuously for over 3,000 years!

The ancient hill fort of Uffington Castle is close by the white horse.

This was our last stop before continuing on to our hotel at Heathrow.

Both the World Religions portion of the trip and our own ramblings rank with our favorite excursions.