After leaving Chongqing, we spent three days on the river cruise.

As I mentioned at the beginning of this travelogue, Jim had dreamed for many years of seeing the Three Gorges before they were completely inundated by the dam. In years past this area was proposed to UNESCO as a world heritage site. It is still on the tentative list as of 2018, and there is little left of this scenic site.

At the time that we visited in 2006 the reservoir behind the Three Gorges Dam was rapidly filling. The dam reached full production in 2012. Its long-term benefit, whether for power production, flood control or river commerce, is controversial. There is a need for additional clean electrical power, but the waste that we saw in cities such as Shanghai made us wonder if the power would be put to good use. Its capacity for flood control has turned out to be much less than originally touted. There have been too many other negative environmental and social results to summarize here.

We embarked at Chongqing on the Victoria Anna for our trip down the river. One of the first things that we learned was that the proper name of the river is Chang Jiang, which means literally "Long River." The Chinese called only the reach nearest Shanghai "Yangtze." The western countries picked it up there and now the entire river is known by that name, at least outside China. It is the longest river in Asia and the third longest in the world after the Nile and the Amazon.

For those who like to orient themselves via maps, the YangtzeRiver.org site has some good maps. In summary the three gorges are called: Qutang, Wu and Xiling. Unfortunately, as was the case in the rest of China, the prevailing smog complicated picture-taking. The problem was worsened on the river due to additional rainy and foggy conditions. 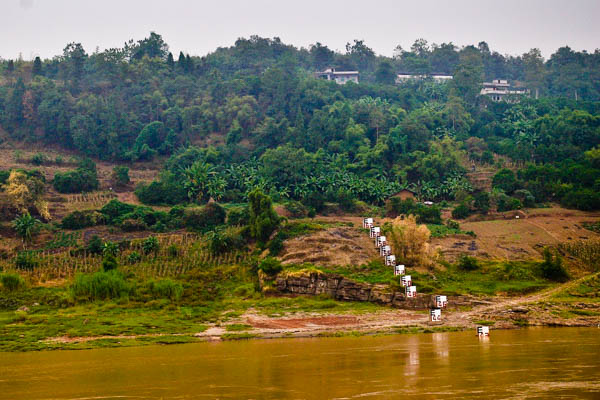 The Qutang Gorge is the first one that we reached.

The markers indicate the potential depth of the eventual reservoir. As you can see, arable land that is currently planted in crops (to the left of the picture) will be flooded. There has been bitter controversy over whether the farmers will be adequately compensated for the loss of their land. They have been granted equal amounts of land elsewhere, but the land is not of the same productive quality as the flooded land. 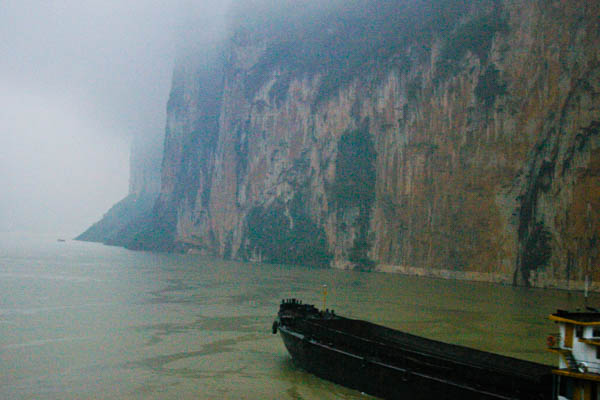 By the time we reached some of the "scenic" spots it was late in the day and we were moreover socked in by smog, fog, clouds and rain. This picture of the steep sides of the gorge was taken at the limits of my camera's capabilities and is thereby pretty unsatisfactory, but it does represent what we saw.

The river was very heavily traveled and we frequently passed other boats.

The next morning we visited Fengdu, which had been destroyed by the Cultural Revolution as were so many ancient and sacred places. It has since been rebuilt as the Chinese have realized its tourist potential.

Westerners who have studied Daoism (Taoism) think that it is a highly philosophical religion, but on the street it is full of demons and many layers of judgment and hells.

These three bridges are part of the judgment. Apparently they really are old unlike most of the buildings. 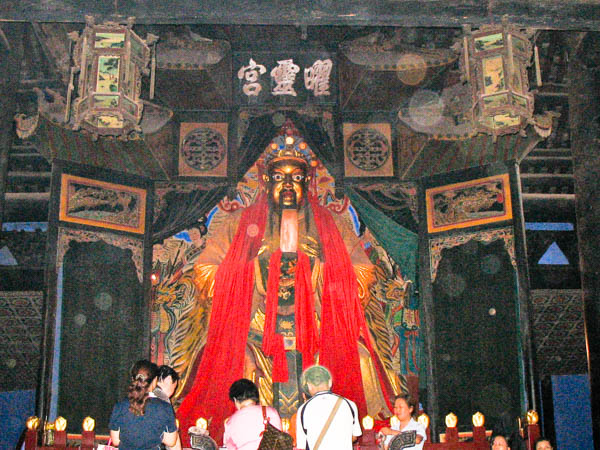 This fearsome individual is a Daoist judge. His shrine was packed with sculptures of the various levels of hell with suitably gruesome and graphic punishments.

Blue is the color of the underworld. There was a lot of it at Fengdu. 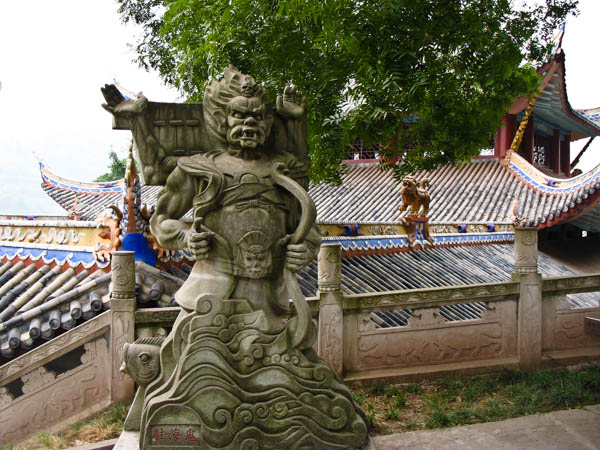 This equally fearsome chap was one of the demons lining the walkway to the top. I wouldn't want to meet him in a dark alley.

This statue, like so much else at Fengdu, is modern.

We spent a day in Wu Shan. Everyone else in our group signed up for a tour of the Lesser Three Gorges, which is said to give a glimpse of what the Yangtze gorges looked like before the dam. They all said it was a wonderful trip.

Jim and I, however, were both somewhat under the weather so we stayed on the boat and relaxed.

The original city of Wu Shan was sited on the ridge closest the boat and was demoished in anticipation of the dam. The high-rise buildings in the background are the new city.

Years ago before the river was tamed, "trackers," men who harnessed themselves to boats, pulled craft upstream. Part of our recommended pre-trip reading was John Hersey's A Single Pebble, which describes the river culture.

After reading the book we were anxious to see the carved tracker trails before they were lost forever under the lake behind the dam. This short section would have been under water by the time our trip was over. 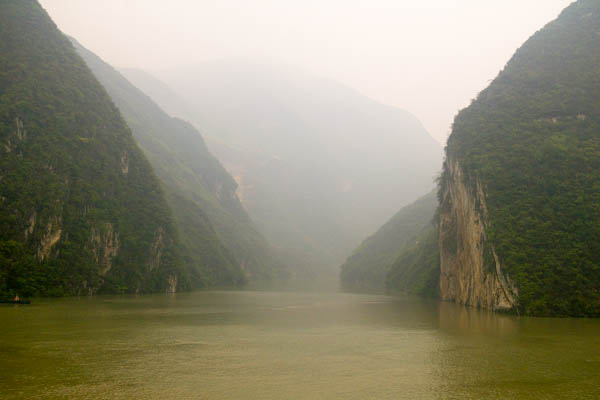 This shot, for all of its deficiencies, gives the best indication of what the gorge was at one time. At the time I'm putting this together (2012), I can no longer remember whether this was an image of the main channel of the river or a tributary.

We passed through most of the Xiling gorge at night so no pictures of it. Too bad. The names of the various notable sights, "Military Books and Precious Sword Gorge" and "Ox Liver and Horse Lungs Gorge," were certainly intriguing! Oh well, they are under water now.

Here we are leaving the gorges and nearing the site of the Three Gorges Dam. We will be disembarking and touring the dam site shortly. 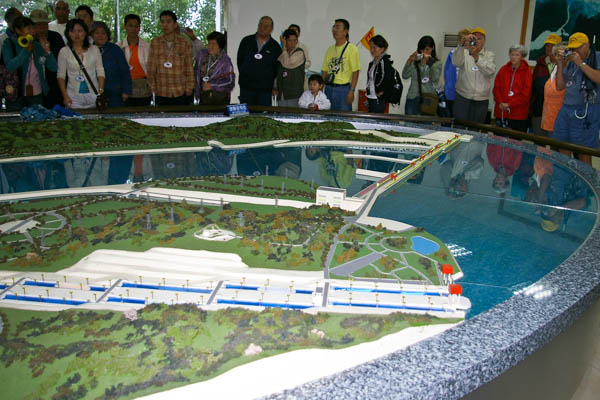 Although we didn't believe the weather could get worse – it did. In addition to the smog and fog, it started to rain.

Because my pictures of the actual dam are so hazy, I was glad to have this picture of the model from the visitor's center.

The dam is on the far side; the ship locks are nearer. The visitor's center is inbetween.

When we think of large dams, we tend to think of the Hoover Dam, which is very very tall (over 700 feet) but narrow. The Three Gorges Dam, the largest in the world, is very very wide – over a mile – AND very tall (almost 600 feet). The scale is deceiving.

This picture is of the dam proper. The ship locks are behind me – with one exception. The angular structure in the foreground will be a ship elevator, which can speed passage past the dam – for a price. It is currently scheduled for completion in 2015. 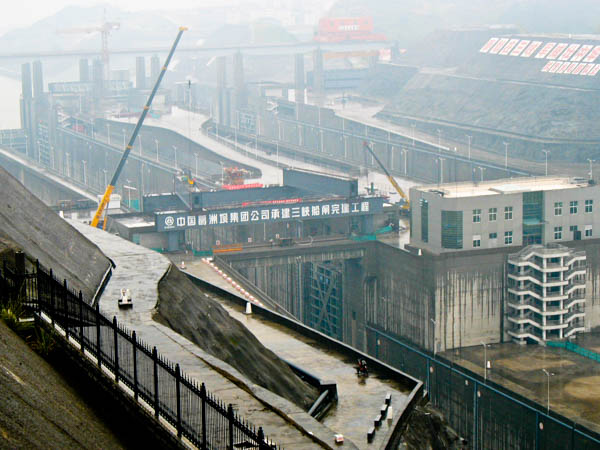 The scale of this pair of locks is indicated by the stairs to the right of the picture. It is seven stories from one level to another. This is just one of five levels.

The lock in the foreground is open on the down-river side. The gates are folded back into the concrete abutment. 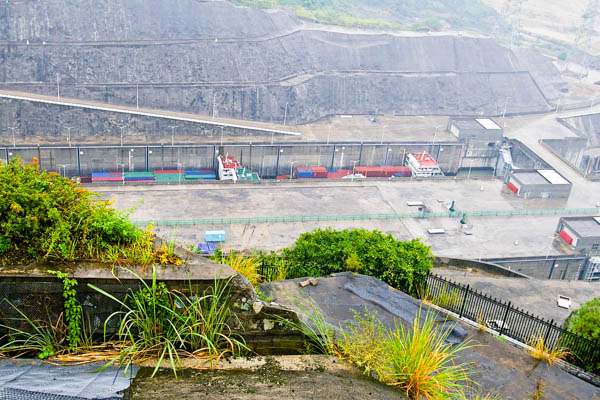 There are two large container ships within one of the locks. It takes several hours to make a complete transit.
After visiting the dam, we headed to the airport for our flight to Shanghai, which would be our last stop within China.