From Yangshuo we flew to Chongqing (most Americans know it as Chung King), the capital of Sichuan (Szechuan) Province. After two weeks of staying in Chinese hotels that ranged from luxury to quaint – we were surprised to find we would be in a Holiday Inn! Nevertheless, it was a long way from Memphis, Tennessee.

Chongqing is the largest city in China in area – maybe in the world. Its size was increased dramatically as part of planning for the Three Gorges Dam and its population is over 30 million.

We were finally treated to some distinctive food in this restaurant specializing in Sichuan Hot Pot. It was fiery and it was yummy! As we suspected, most of our group didn't care much for it.

We had been looking for a place to buy Sichuan peppercorns throughout our visit. These have been increasingly hard to find stateside. The owner of the restaurant was pleased to GIVE us what is probably a lifetime supply! Even though we declared them at customs, they were allowed through. 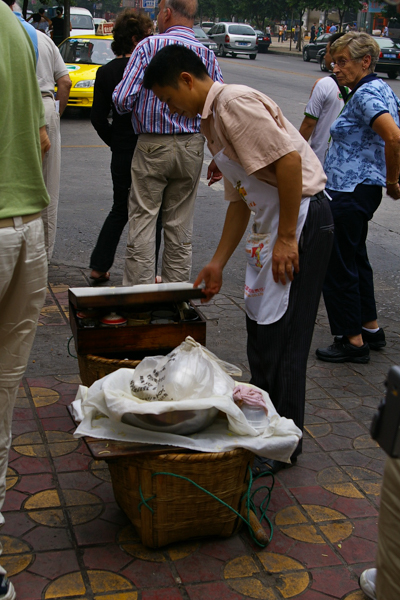 There were street food vendors in many of the places we visited. For all our complaining about the bland food, I admit that we were cowards and never tried any of the street food. This vendor's wares, however, smelled delicious and it was only the fact that we were headed for the hot pot restaurant above that made it resistible. 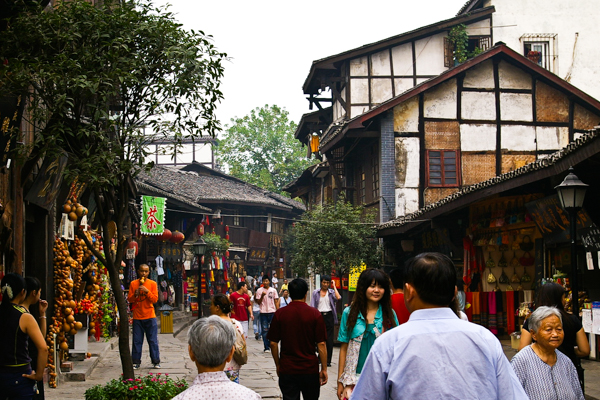 Most of Chongqing consists of modern skyscrapers, but a portion of the old city has somehow been preserved (or reconstructed) and is now a popular attraction. We enjoyed the variety of shops and tea houses. 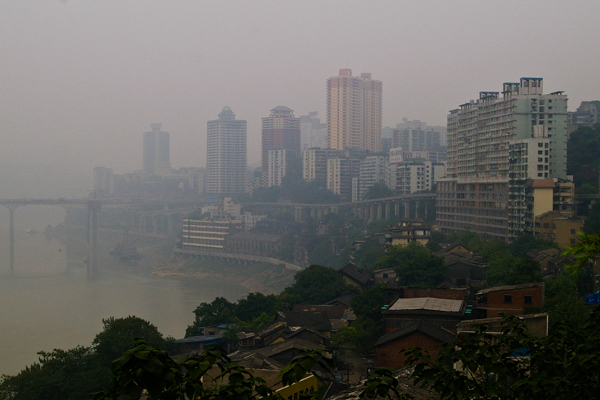 This was a more typical view of the city. The ubiquitous smog was much worse here.

Chongqing also had a number of what were called "see through" buildings. These were highly leveraged construction projects started in the booming '80s that were never finished. There was one right across from our hotel that had shrubs growing on the top floors and trees in the parking garage. I am sorry I didn't take a picture of it.

Apparently this phenomenon was duplicated for the Beijing Olympics. 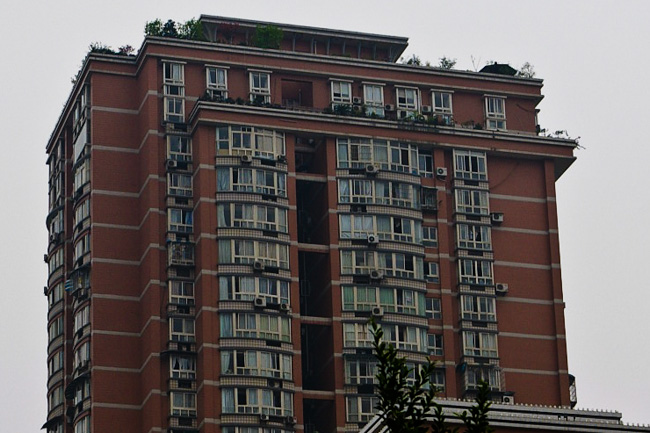 In China apartments are delivered with no fittings. Not just without kitchen appliances, but without toilets, lights, or other essentials. There is also no central heating or air conditioning.

As a result, you will see lovely buildings like this one with add-on HVAC units plastered higgledy-piggledy across the facade. Many of the newer buildings provided specific locations for the units, but they were routinely ignored. 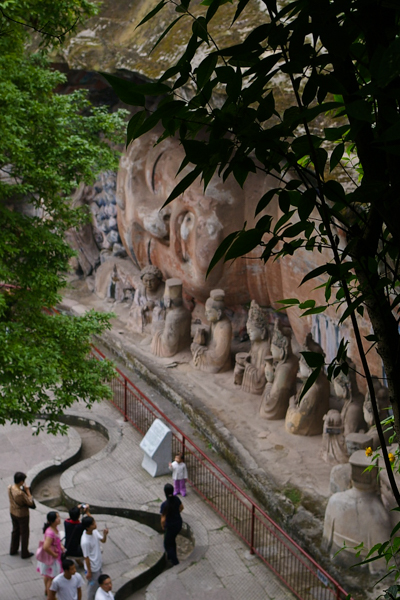 While in Chongqing we visited the Dazu Grottos, which is a shrine with Buddhist, Daoist and Confucian images. It is a UNESCO World Heritage Site.

Although called the "sleeping Buddha" this sculpture depicts the Buddha as he is entering Nirvana attended by various personages.

For a more extensive album of sculptures at this site, see the descriptions and pictures at art-and-archaeology.com.

The sculptures at the site, generally dating from the Song Dynasty, late 12th & early 13th centuries, were extensive and extremely detailed. There were some indications, such as are shown in this picture, that production was unexpectedly halted.

Although the upper portion of the carving is detailed and complete, the lower portion is only roughed in.

This section is focused on the life and teaching of Liu Benzun who lived at the end of the 9th century. 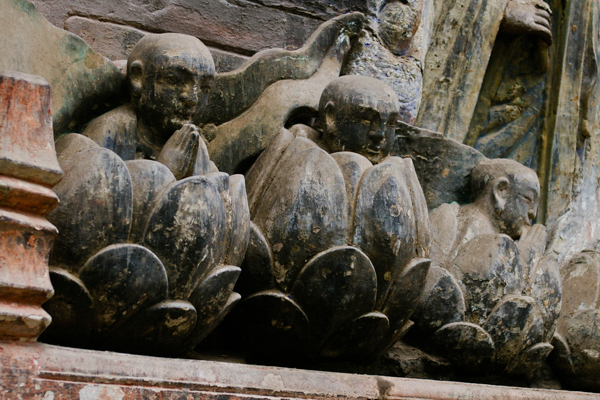 In one strain of Buddhism souls are thought to attain rebirth into the celestial realm or pure land. Here they are shown emanating from lotus flowers. 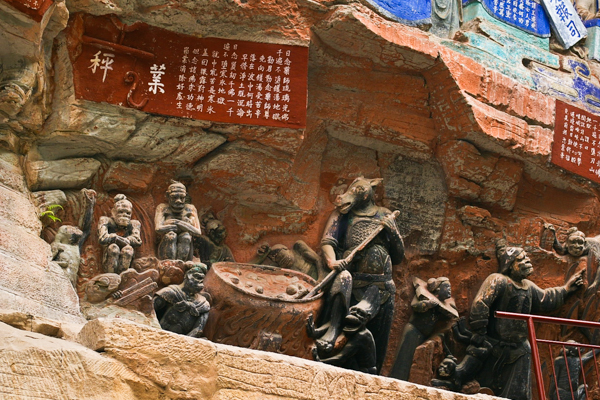 The alternative is grim. One of the "18 stories of hell" shows various tortures awaiting the unenlightened on their passage in the netherworld from one vale of woe to another. 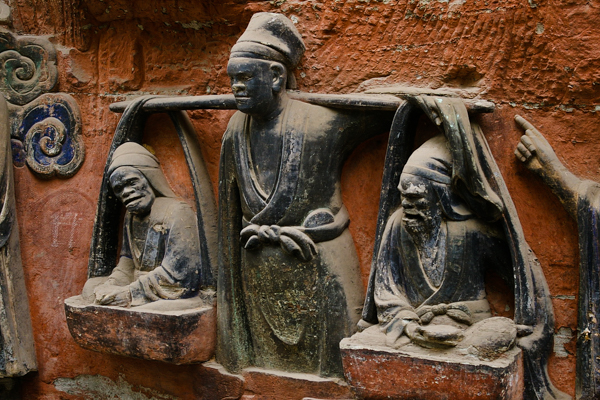 The Chinese ideal of filial piety also figured heavily in various areas of the grottos. Here a son is shown supporting (literally!) his aged parents – neither of whom looked particularly endearing.

There were other sections that showed parental love toward the son, which instilled the gratitude that would result in this long-time support. 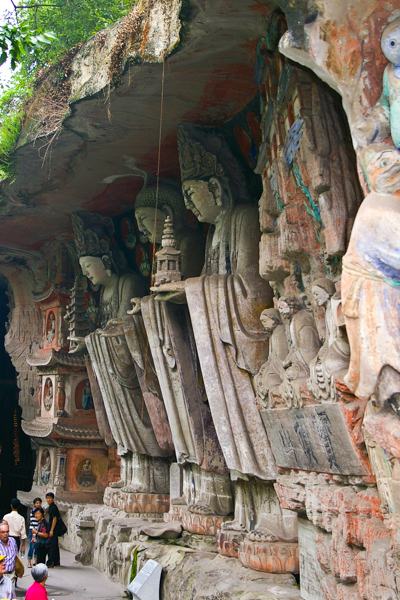 I loved these enormous figures. I can't tell you what they represented, but their size and the way that the folds of their sleeves acted as buttresses to support the massive carvings each is holding (the people provide a relative scale) was spectacular.

Clearly the artists who created these carvings were pretty good structural engineers as well as story-tellers and designers! 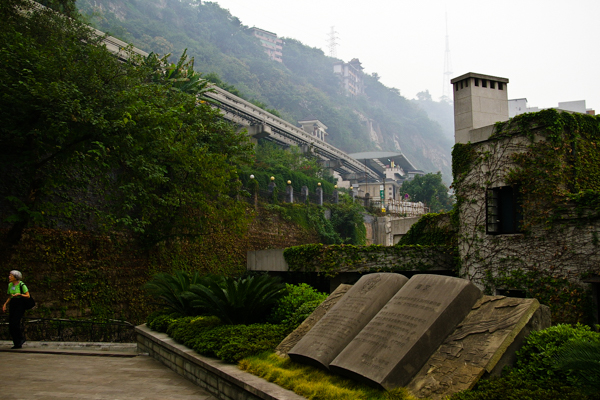 During World War II Chongqing was the provisional capital of China. It was also the northern terminus of the over the hump supply flights by the Flying Tigers and others.

This villa served as the headquarters of General Joseph Stilwell.

Bomb shelters built throughout the hills and used during Japanese bombing raids have been converted to use by small businesses. The tracks seen above the trees belong to a monorail system. 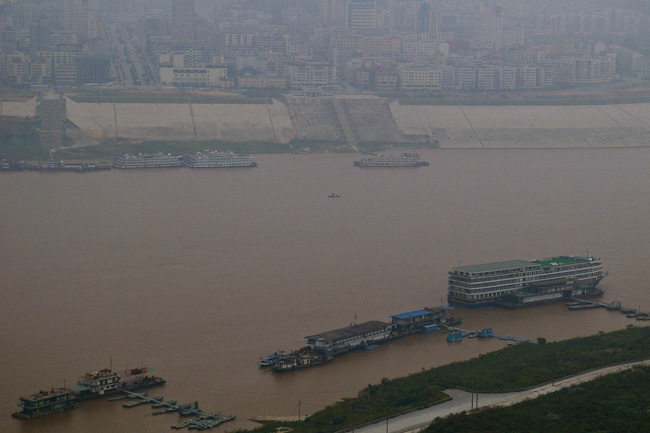 At Chongqing we boarded the MV Victoria Anna, brand new at the time of our visit, for our trip down the Yangtze to the Three Gorges Dam.

We boarded at night, so I don't have any pictures from Chongqing. This one is from a stop at Fengdu.