From Xi'an we flew to Guilin for our visit to Yangshuo and the Li River valley.

As a fan of Chinese landscape art I had always assumed that the pointy peaks so often seen were exaggerations. Not true! Our visit to Yangshuo and the environs of the Li River showed us the originals of those peaks. 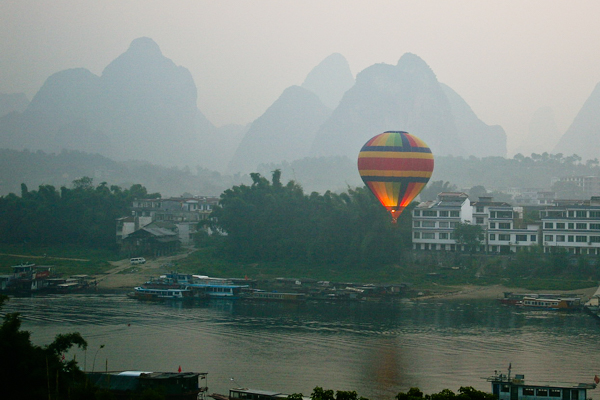 Our hotel overlooked the river. One morning before dawn we heard the unmistakable whoosh of hot-air balloons. We looked out the window and saw two balloons gracefully drifting downstream.

They would sink almost to the river's surface before soaring back up with a flash of fire.

As elsewhere in China the persistent smoggy haze permeated the atmosphere. 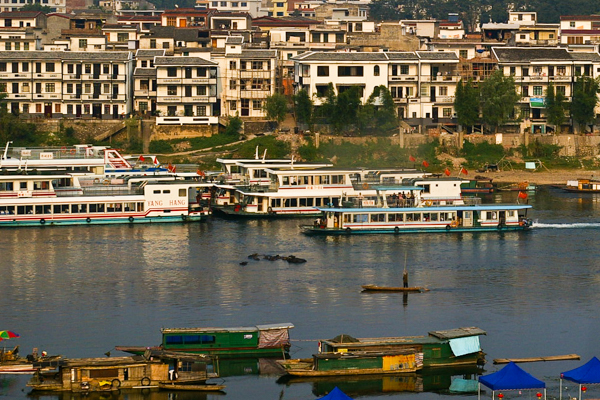 The life of Yangshuo is focused on the river. On this side are houseboats - fisher-folk live in them. Smaller boats like the one midstream are used for fishing and river-weed gathering. The dark shapes to the left of the fisherman are water buffalo enjoying the cool water of the shallow river. Excursion boats on the far side cater to the tourist trade. 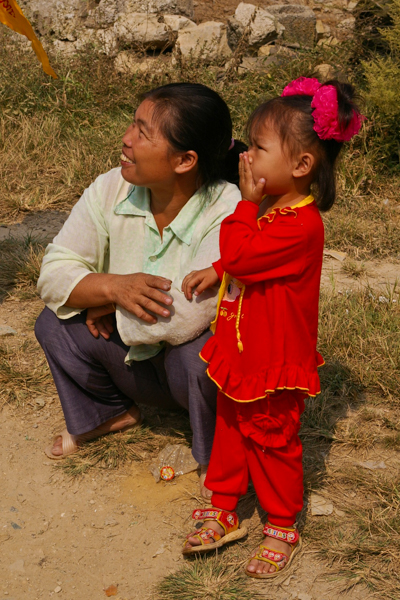 One day we had an excursion into the countryside to visit a farming village. We were told that this "family" is typical. The older woman is the grandmother of the little girl, whose parents have gone to the city to find work. They send back money to support granny and the child.

Under Chinese law a couple is only allowed one child – unless that child happens to be a girl. In that case they can have a second child in hopes of producing a son.

We wonder what will happen when all those sons grow up and find that there are limited women available to marry. 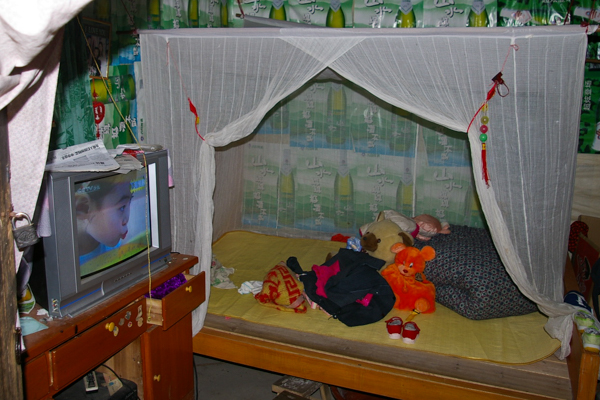 Because of the limited family size, much attention and expense are lavished on the children. This home was very small and unassuming, but the "little empress" had the largest bedroom and her own color TV.

In spite of the small size, dirt walkways and crumbling walls, every house had cable access.

I expect this particular village had some kind of stipend from the tourism agency on account of these visits, so it may not have been typical. 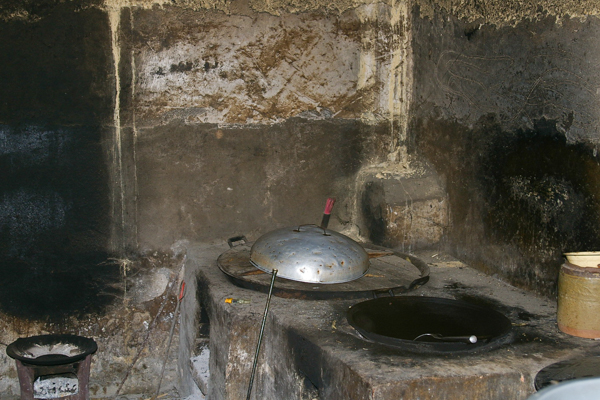 The family's kitchen was in a separate building and was very limited. I seem to recall that the kitchen was shared by several families. It was quite a contrast to the child's room above.

Some children were being trained to seek out tourists. A pair of mothers and daughters followed our bus all day on motorbikes. At every stop the children were dispatched to sell cheap souvenirs. They were very persistent, but I don't believe they were wildly successful.

I preferred that to the mothers who instructed their children in begging! 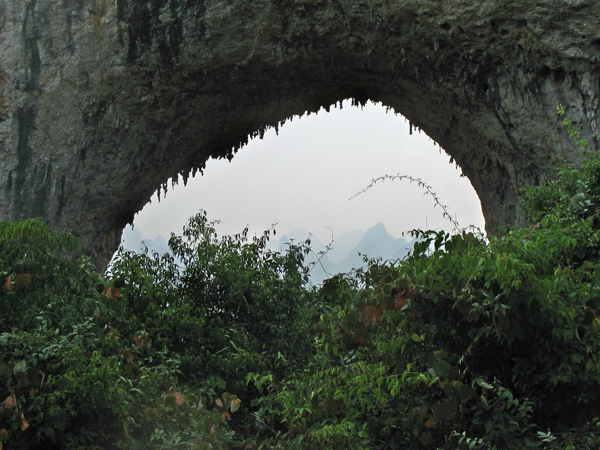 One expedition was to Moon Hill. It was a stiff climb to the platform where the natural arch can be seen. Some in our group took the extra time to scramble to the very top above the arch, but I declined. 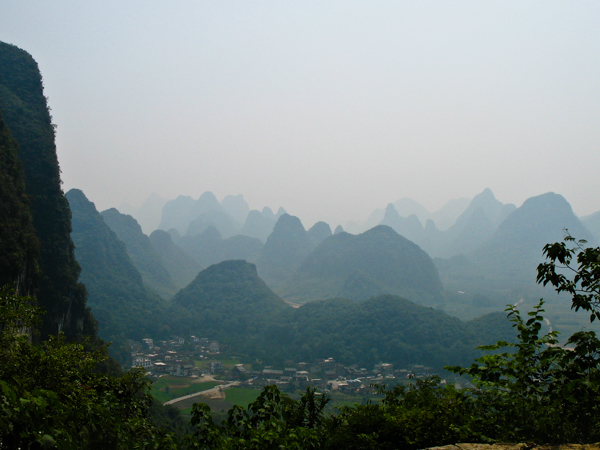 The overlook was quite stunning – even with the haze. It was definitely worth the climb.

At the base of the hill each climber was "adopted" by a local escort who carried a cooler of water and juice plus a fan. It made the climb, which was rather strenuous on a hot day, more pleasant. 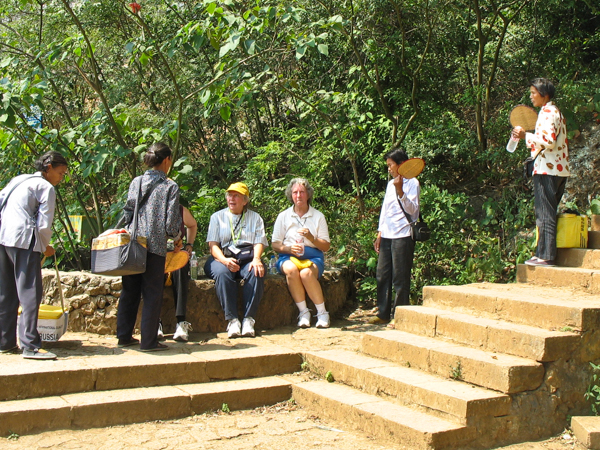 My lady, standing on the right in this picture taken at the top, spoke a few words of English. We had a nice time.

I unwittingly caused a steep escalation in prices, however. Not having been warned of the escorts, I didn't have any small bills. We had been admonished to pay only 5 yuan (about 50 cents) for the refreshments, but I only had a 20 yuan note. I didn't have the heart to demand change. The news spread like wildfire and by the time we got back to the base, all the escorts were insisting on 20 yuan for a bottle of juice and we got a stern lecture from our guide on the irresponsibility of being too lavish! 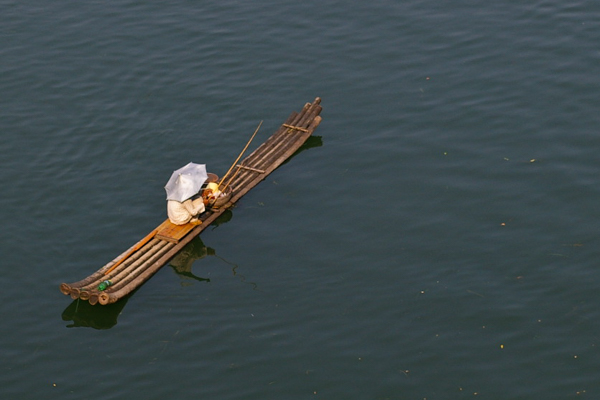 One afternoon Jim & I walked along the river road. This picture shows the economy of construction of this fishing skiff. They were very graceful.

We met a young Chinese man on our walk who told us that he came back to Yangshuo every year on holiday. It is a lovely place. 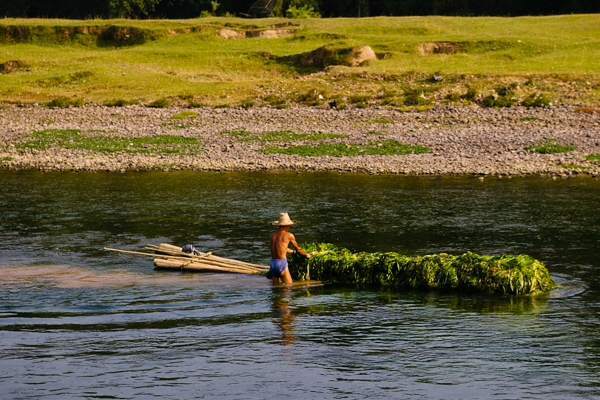 In addition to being used for fishing, the skiffs are also used in harvesting the underwater plants or riverweed that is dried and used for animal fodder.

The local water buffalo also "graze" on these plants in the river. 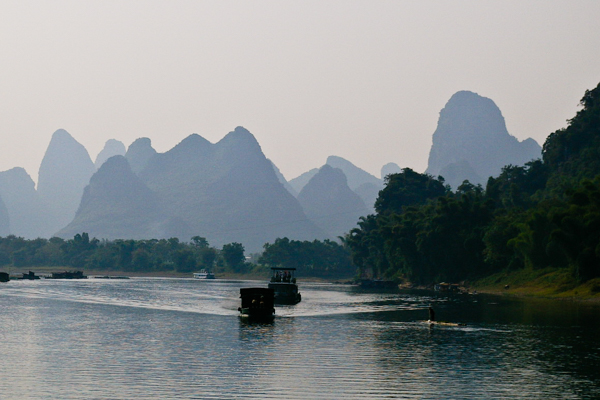 One afternoon we took a river cruise down the river and back. The river reach below Yangshuo is not as crowded as the reach between Yangshuo and Guilin, but we still saw many tourist boats of all sizes.

At various points along the shore local people had set up floating "stages" where they could perform traditional music and dances for the benefit of the tourists.

Most of these tourists, by the way, were Chinese, not Westerners. 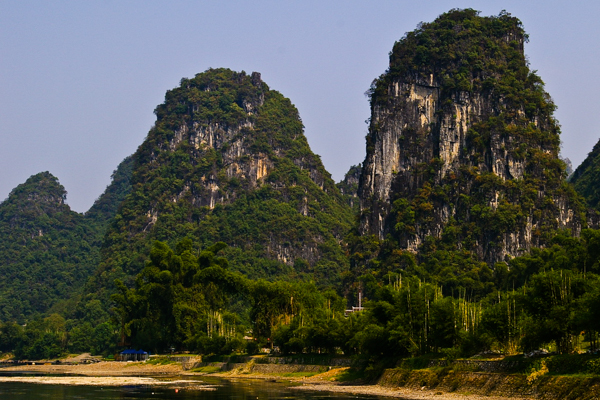 I'm certain that I've seen the mountain on the right in a Chinese landscape painting!

The karst geology in this area is similar to our home in the Valley of Virginia, but it looks quite different for a number of reasons.

Jim was fascinated by this Chinese gaging station. Similar stations in the US are maintained and monitored by the US Geological Survey where Jim worked for forty years. I've never seen a USGS station, however, with a decorative tile roof. 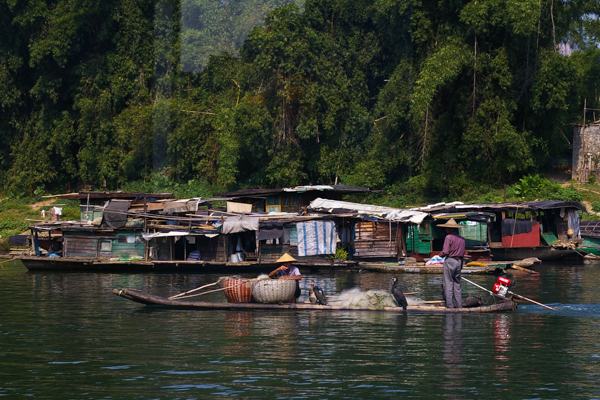 We were able to get a close-up view of the fishing "villages" along the river. This couple has a pair of trained cormorants to help their fishing. They also had one of the few outboard motors that we saw. 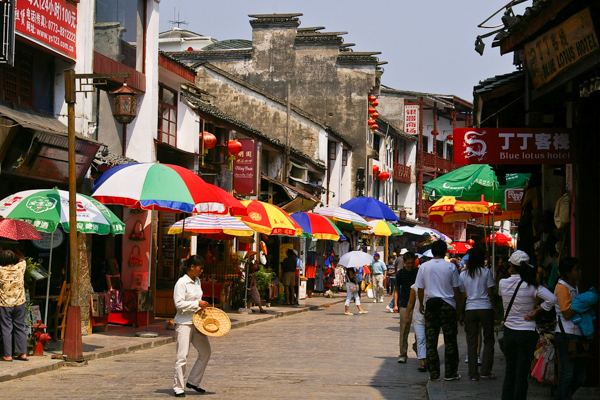 The main street of Yangshuo was called "Western Street." It was crammed with restaurants, snack bars, and shops selling goods of all kinds. 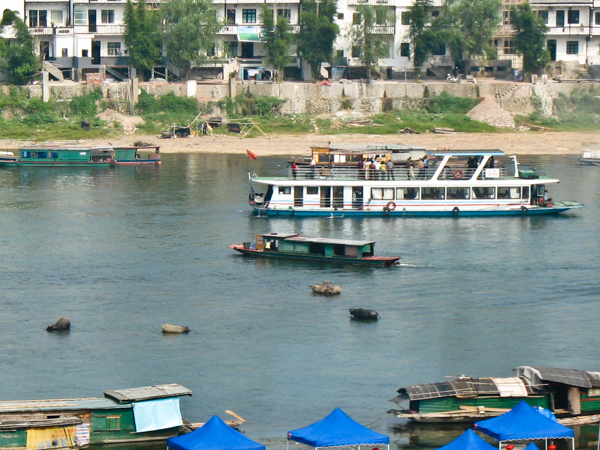 One of the more remarkable sights was the behavior of this group of water buffalo. They were enjoying the cool of the river – totally ignoring the various boats that detoured around them. Suddenly there was a call and the animals began to move toward the opposite shore. They filed to the left along the bank and disappeared behind the wall. Clearly someone had called them home, presumably for dinner.

Our guide said that the buffalo were so revered as companions as well as work partners that when they die they are buried with great ceremony rather than eaten.