For our flight from Beijing we took one of the many internal Chinese airlines. They must have at least as many as we do in the US and we took a different one for each leg of our journey.

Xi'an is noted nowadays for the terra cotta warriors, but it is also the Chinese terminus of the former Silk Road. It still has a large Muslim population and some of the best food that we had in China. Unfortunately the air pollution was, if anything, worse than Beijing's. 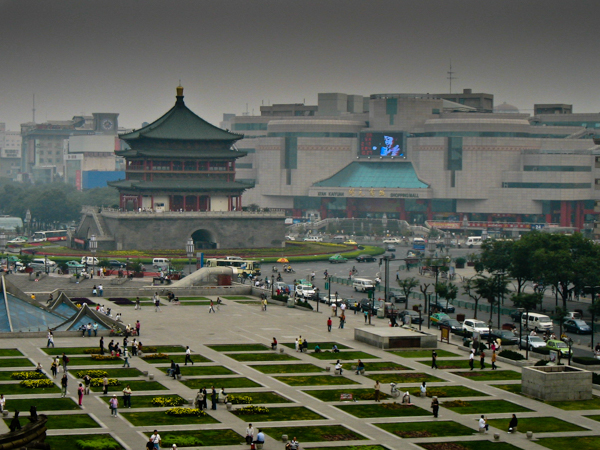 The bell tower is in the heart of the city. I don't remember if the bells struck the hour or not, but every morning the park near our hotel played music that we were told was composed by Chairman Mao.

If what we heard was typical, he was a good song-writer. Can't find any web links, however, that mention any musical talents. 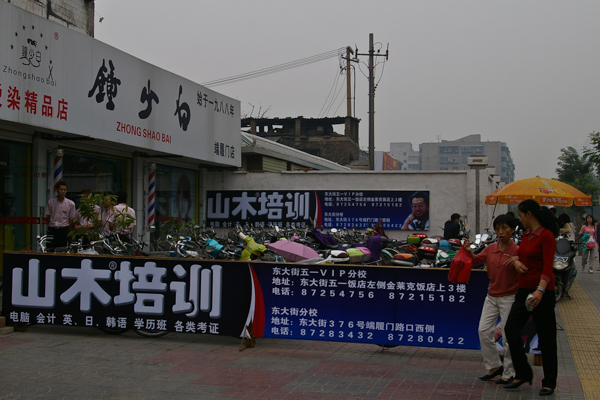 Xi'an had quite a few bicycle commuters. We were impressed by this "parking lot" that took up all of the sidewalk forcing walkers into the street.

It was a great city otherwise to walk around. Lots of shopping too. 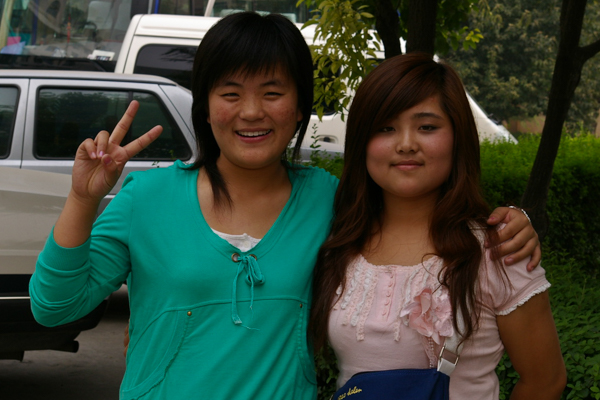 One of the features of our stay in Xi'an was the opportunity to visit the local university to meet some students.

Jim and I were assigned to these two youngsters who took us around and described their classes and their lives at the university. All went well until they mentioned that their teachers had told them that we might give them money. 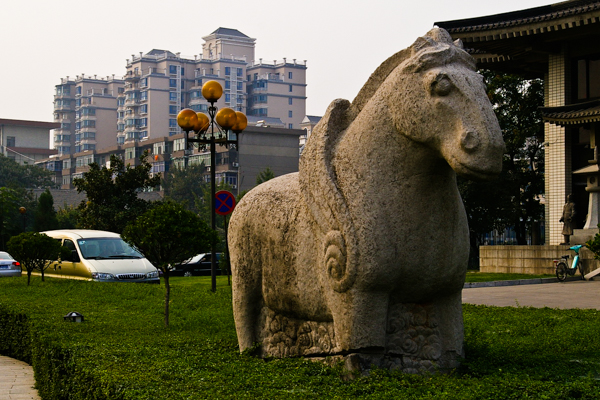 The Xi'an Cultural Museum was a worthy visit. It was a great preparation for our eventual trip to see the terra cotta warriors because it put things into context.

Unfortunately I can't provide an informative link to it because Xi'an is home to many good museums and at this time (2011) I cannot identify exactly which one we visited.

Of course I loved this ancient horse sculpture. 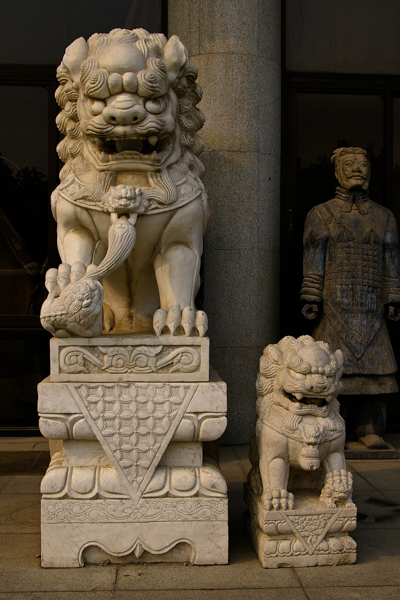 Throughout China we saw pairs of guardian lions at gates. The female lions were always on the left and the males on the right. The lionesses invariably had a paw on a cub. The males had a ball – frequently a soccer-like ball.

The consorts of these two lionesses were on the opposite side of the museum entrance. 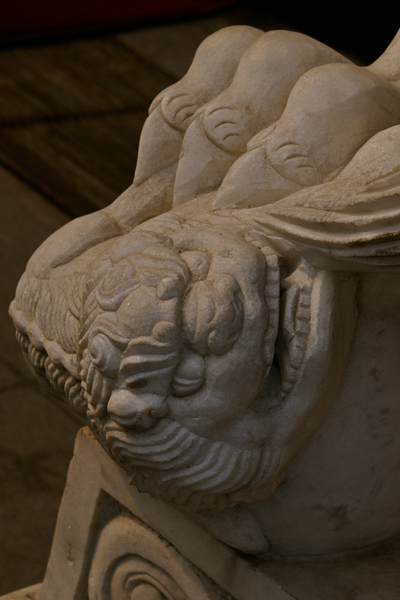 The variety of the cubs was fascinating and I took way too many pictures. There will be more!

This cub detail is from the larger statue. 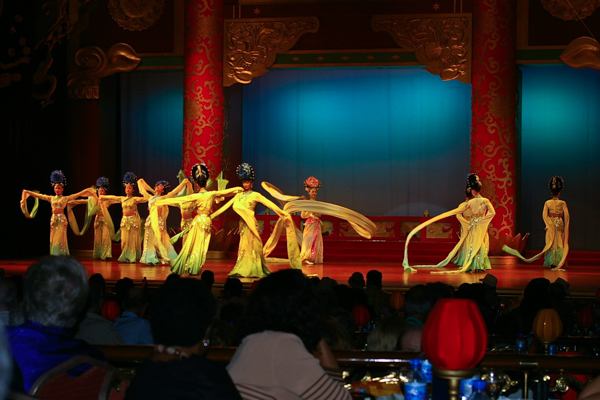 One night we went to a "dinner theatre" showcasing dance and music from the Tang Dynasty. Xi'an, then named Chang'an, was the capital city at that time.

Nowadays this period is known primarily for its cultural contributions. 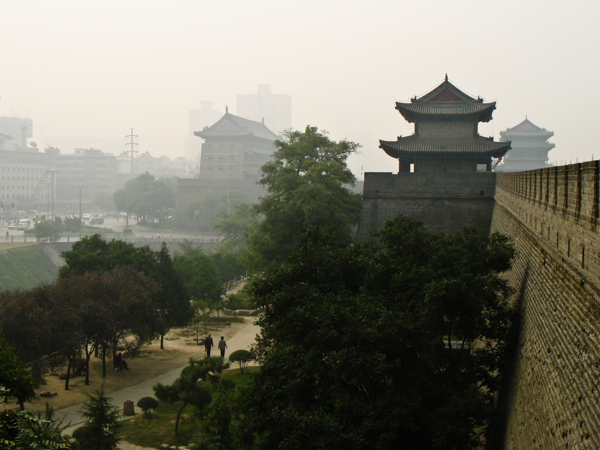 One free afternoon Jim and I visited the city wall, which still encircles the center city. We had heard that one could rent bicycles and ride around the entire wall, but there were complications (as I recall they wanted a fair amount of money – in cash) that kept us from doing that.

So we walked about a quarter-way round. It was really quite nice -- almost deserted and a great vantage point over the city. This is the east gate. 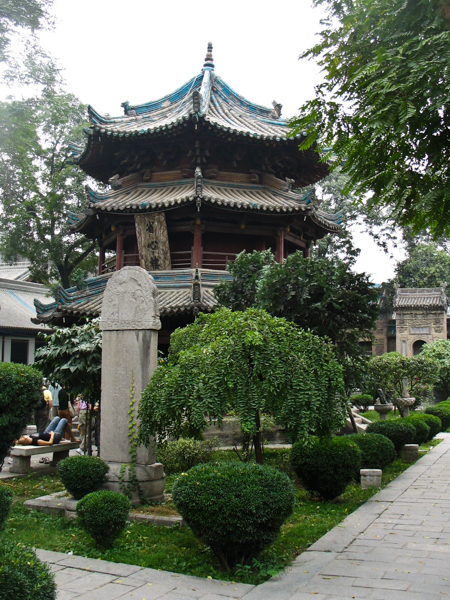 As mentioned above, Xi'an was the eastern terminus of the ancient silk road. There is still a large Muslim population and this is their mosque – not what we usually picture.

Many, if not most, religious centers were destroyed during the Cultural Revolution. We asked how this one escaped and were told that the Red Guard leaders relished the peace of the park and made it their headquarters.

I've tried to find a web site that provides a succinct description of the chaos that was the Cultural Revolution. Not possible. One book that was on our Elderhostel reading list was Wild Swans by Jung Chang. I recommend it to anyone who wants to learn more about this tragic time. 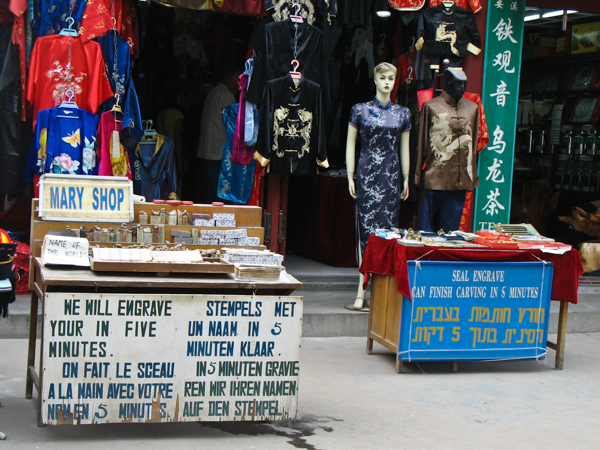 In the neighborhood of the mosque there was a huge bazaar. We were fascinated by the variety of languages offered at this stand ... including ... Hebrew?

English did not appear to be a specialty. The German is clearer: the proprietor will engrave your name on a Chinese signature stamp in five minutes.

I loved the fact that my name in Chinese included the phoneme for "horse."

The food in Xi'an was the best we encountered. In general we were very disappointed in the food. In most places we were given heavily westernized banquet-style food and it was pretty boring – although I'm sure the tour company found they got fewer complaints that way.

In Xi'an the food was not only tasty, it was beautifully presented. Bok choy was a staple everywhere, but it was rarely as beautiful as this.

Wine was also not a strong suit, but we did find some that was pretty good. Many of the Chinese drink a local rotgut that would have put me under the table in a couple of swallows.

Beer is usually a decent bet.

We were cautioned never to drink water unless it came from a sealed bottle in a reputable place. 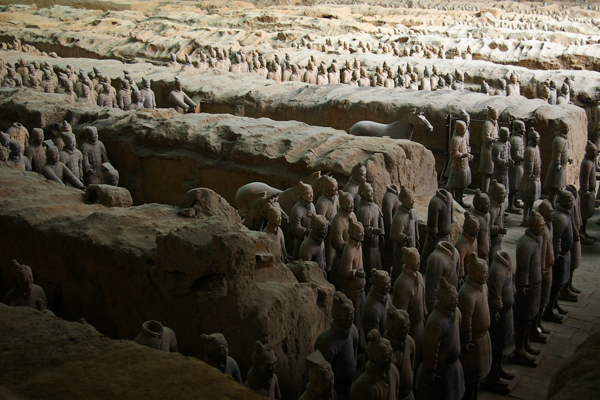 In the 3rd century BC, the emperor Qin Shi Huang directed that these life-size figures would be created to accompany him to the after-life. Each warrior is unique. The artists were murdered to prevent their ever replicating their feat.

The "army" was destroyed shortly after the emperor's death by invading forces. It was forgotten for two millennia until being unearthed in 1974.

The orderly ranks seen above are a reconstruction. This picture shows what was typically found. The dark stains are ashes from the destruction so long ago. 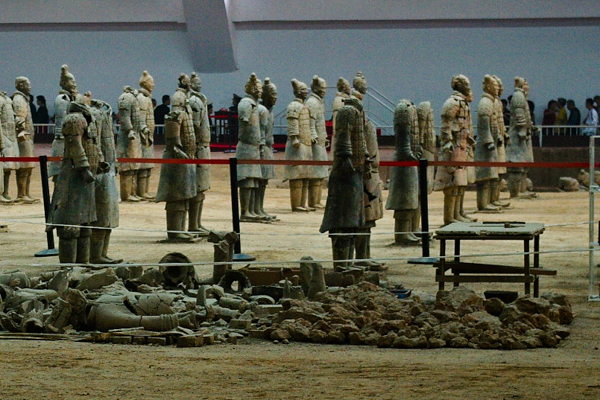 Broken pieces are reassembled into individual statues in a nearby workshop. Apparently work is sporadic as funding becomes available. 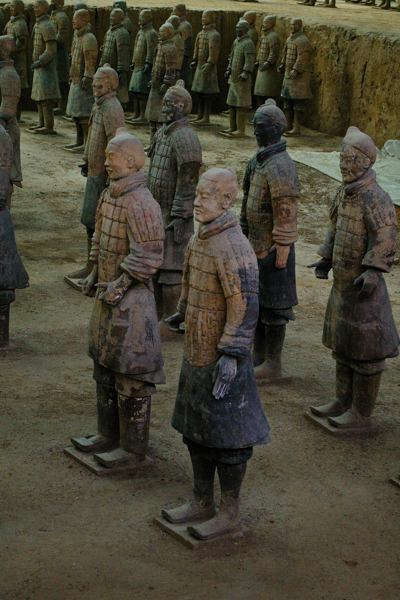 Here are some restored warriors. This shows how different they are – not just the faces, but the poses.

Some of these were designed to hold something – either weapons or the shafts of a sedan chair or rickshaw-type conveyance.

I do not believe that there is any certainty about which head went with which body.

After several days in Xi'an we flew to Guilin for our next sojourn in Yangshuo on the Li River.