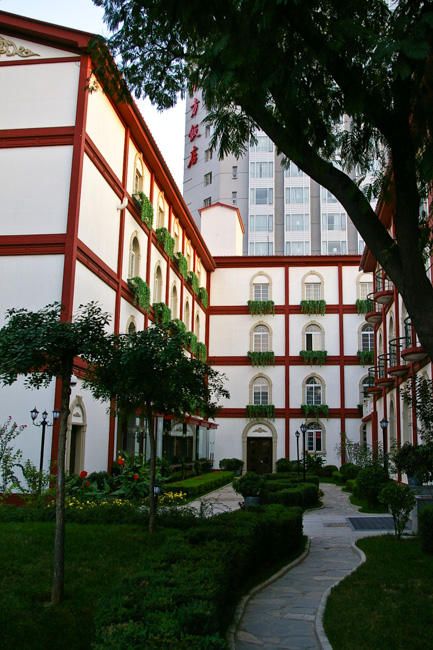 It's a cliché to call a place a study in contrasts and perhaps it is true of everywhere. Nevertheless it is certainly true of China. This picture of our hotel in Beijing is an example. This quiet courtyard is only part of the hotel – the huge high-rise seen in the background contains the main guest facility.

I recall that this portion of the hotel dated to many years ago while the high-rise was brand new at the time of our visit.

The hotel was built on the site of a Ming Dynasty temple. The only thing left of that was a carefully displayed cornerstone. 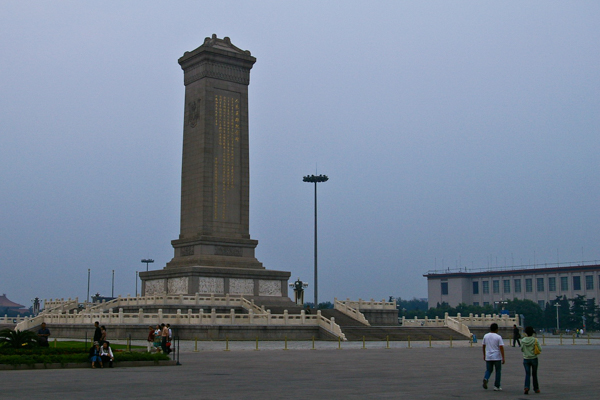 Our first stop was Tiananmen Square, which is huge beyond description.

This is the "Monument to the People's Heroes," which was ironically the center of the protest encampment in 1989. The square was also the scene of the army's assault on some protesters.

When questioned our guide said only that he had been a baby at the time so couldn't comment. The incident is seemingly not taught in history class. 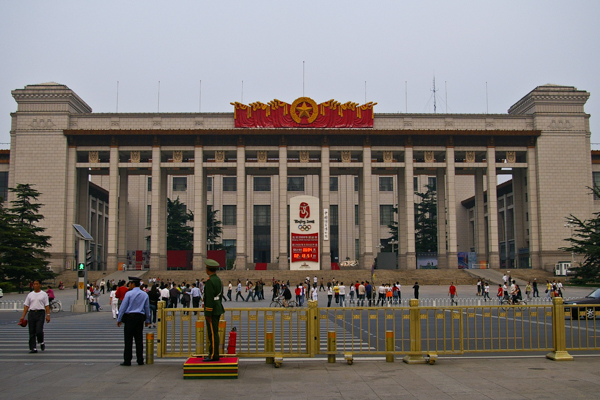 This digital display on the National Museum shows the time remaining until the 2008 Beijing Olympics.

Any loyal cadre will tell you that the Chinese are not superstitious, but ask the man on the street and he will assert that eight is a very auspicious number. The Olympics were scheduled to start at 8pm on 8/8/08. You are welcome to draw your own conclusions.

Likewise most hotels did not have a "4th floor" – just like many hotels in the west don't have a "13th floor." 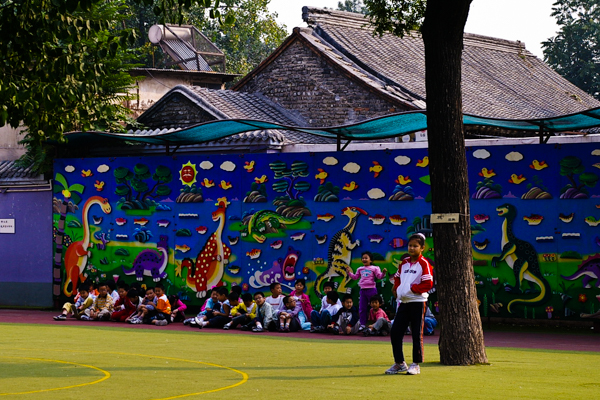 The next day we visited an elementary school where we got to see the children and receive a lecture from one of the teachers.

The playground is gaily decorated and the children enjoy their recess period as much as children anywhere. They made an amazing amount of noise – but became equally quiet and industrious when the bell rang to resume classes. 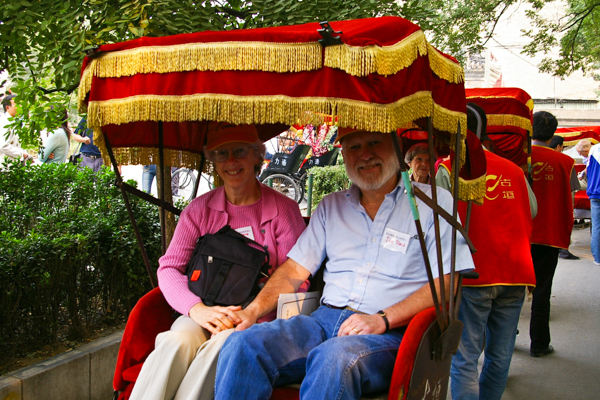 The "hutongs" are old Beijing neighborhoods – technically the alleys inside the neighborhoods. In recent years many have been demolished. Some call this slum clearance; others call it the destruction of a unique cultural asset.

Due to the narrow alleys, tours are done via cycle rickshaws. We were told that Elderhostel would take care of all tips on group outings so we didn't tip our driver – much to his disgust. Our advice: tip the drivers. They are hard workers.

After our hutong visit and lunch in an old courtyard residence, we were able to walk around. This street bordered a lake surrounded by a narrow park. Many people were out walking or playing games. Individual commerce seems to thrive as evidenced by this fruit stall. Everything was fresh and yummy looking.

Soong Ching Ling was one of the celebrated Soong sisters and the wife of Sun Yat-Sen. Her former residence has been turned into a museum and cultural center.

Sisters Ai-Ling and May-Ling (famous as Madam Chiang Kai-Shek) sided with the Nationalist Chinese and were exiled as a result.

The Summer Palace is located outside Beijing. It is a beautiful park.

Usually their positions were reversed, but the dowager empress Cixi preferred to see the phoenix in the primary position and that is the configuration here. She was one tough cookie. 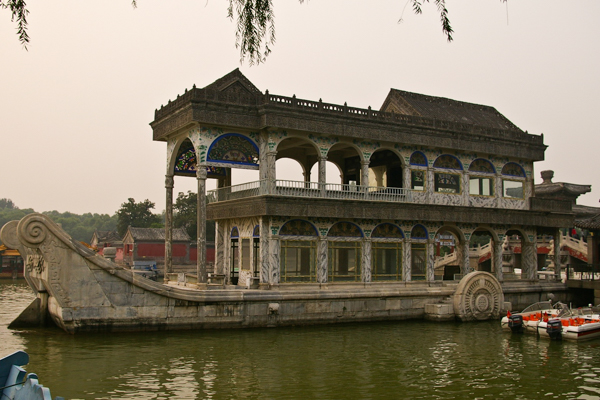 In addition to the buildings commemorating the imperial past, we saw a living remnant of the past here at the park – an elderly woman with bound feet. She was visiting with her family and was in a wheelchair, although apparently many women walk without trouble.

Unlike the buildings, which are mostly reproductions, she was the real deal.

The lake constitutes much of the park. This "boat" didn't go anywhere though. 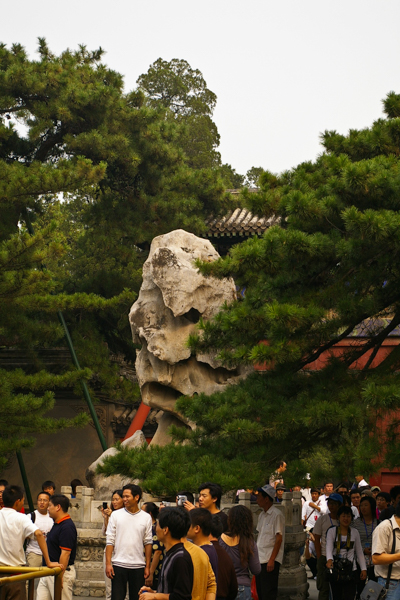 Another thing that belies the denial of superstition is the nod to feng shui almost everywhere we went – including the phoenix & dragon statues. Rocks such as this one, things of beauty in themselves, are placed to balance energy fields.

Our guide Jia told us how his parents had consulted with a feng shui master on the arrangement of their house to ensure that their son would be successful in business and in finding a suitable wife. The result was somewhat awkward as to function, but they were still happy with the consultation.

Jia, on the other hand, felt that his success was due more to his hard work and study. As to the wife – no candidates yet. 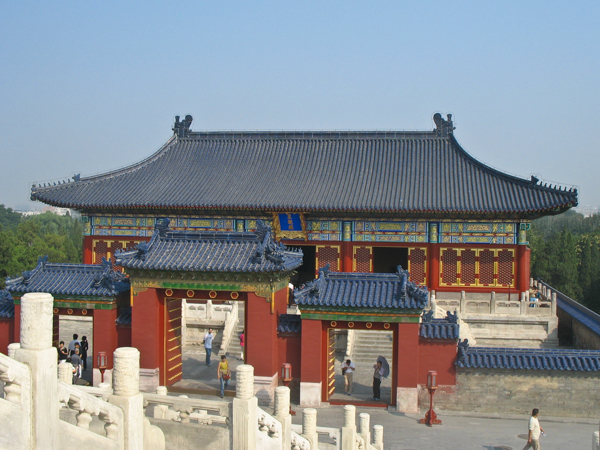 The Temple of Heaven was the most sacred of the imperial temples. You can read all about it by following the link.

The buildings were beautiful, like this pavilion, which was at the foot of the stairs leading to the main temple.

What we loved, however, were the people. See below for a sample of the various activities we saw. 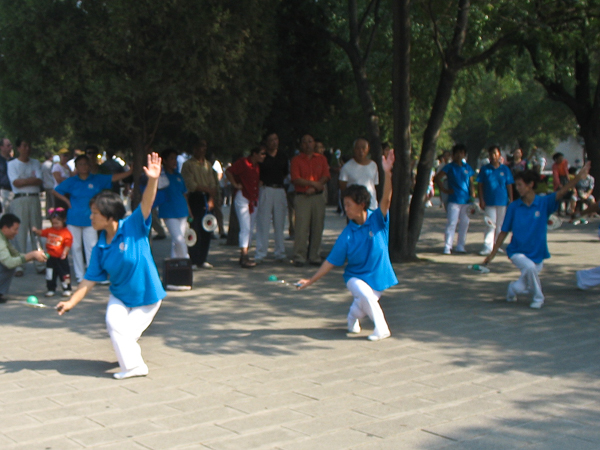 There were several groups practicing a form of Tai Chi (or Taiji) done with paddles and balls. It is also called Rhythmball. Follow the link to see a video performance. Although the video is in slo-mo, my memory is that these performers weren't much faster.

This group seemed to have their synchronization down well. Due to the uniforms, we guessed it was a club of some sort.

It was graceful beyond description. 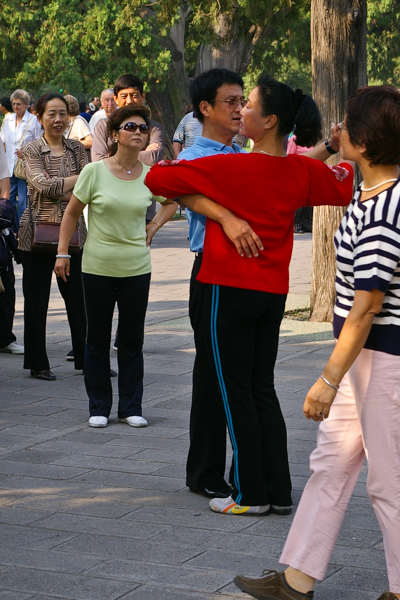 Another kind of dancing that we saw was ballroom dancing. This was apparently a lesson. The woman was instructing the man and was not at all shy about giving him quite the lecture if he didn't meet her standards. We saw several such groups around the park.

The bystanders seem to be looking for pointers.

Many Chinese are fans of this style of dancing. When we lived in California several of my colleagues of Chinese extraction were in dancing clubs and at least one couple were serious competitors. I got to see them dance once and it was a beautiful sight! 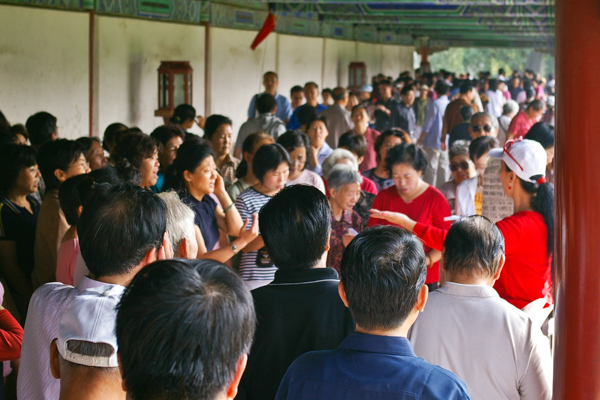 This picture gives an indication of the crowds that assemble here. This particular group is singing. The woman on the right in the white hat is the choir director.

I don't know if these are spontaneous gatherings or if there is a set time and place for groups to meet. This one appeared to be rather informal. 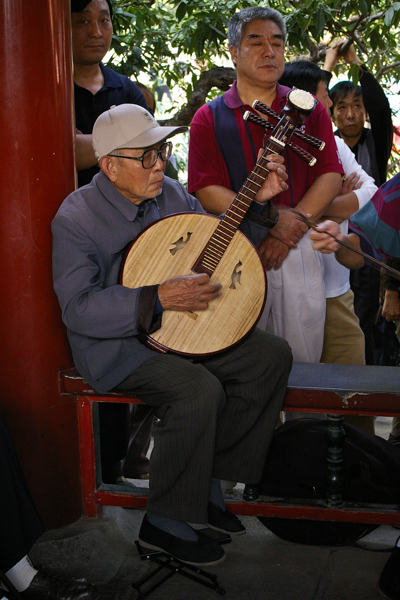 This gentleman was playing in an instrumental group. As in everything else there were several such gatherings throughout the park. Unlike the choir above, I got the impression that the instrumental groups were more formally organized.

This instrument is called a ruan.

Another popular instrument was a two-string bowed er-hu.

Of all the things we visited in Beijing the Temple of Heaven was my favorite. I could have spent the entire day there watching and listening to the people.

The park was quite nice too. 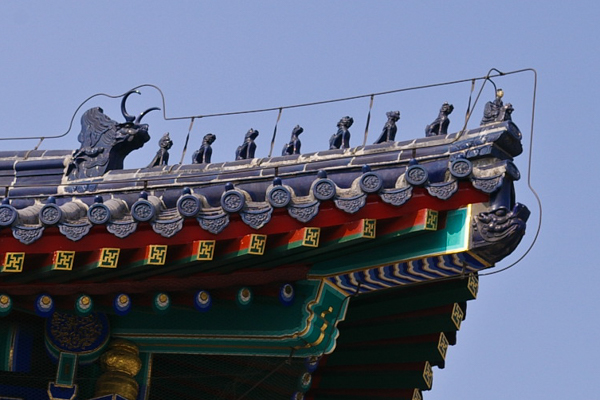 We were fascinated by the figures or roof charms seen on so many of the old buildings near Beijing. There seems to be a good bit of controversy about their identification and origin. We were told that the number indicated the prestige of either the building's function or its inhabitants. 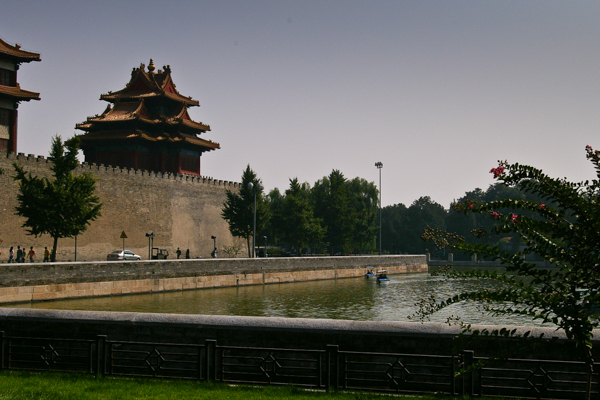 The Forbidden City lies in the heart of Beijing surrounded by a moat. By the time we got there we were, frankly, getting pretty jaded with the magnificence of everything.

The golden roofs indicate the imperial functions of this area.

Everything was being refurbished in preparation for the expected crowds associated with the upcoming Olympic games. 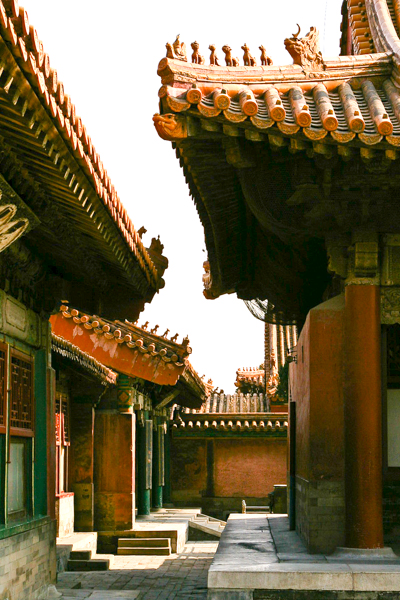 The imperial concubines, of which there were usually many, each had her own household of eunuchs in this compound. The emperor would drop in on the chosen consort for the evening.

It must have been a pleasant neighborhood replete with power struggles and intrigue. 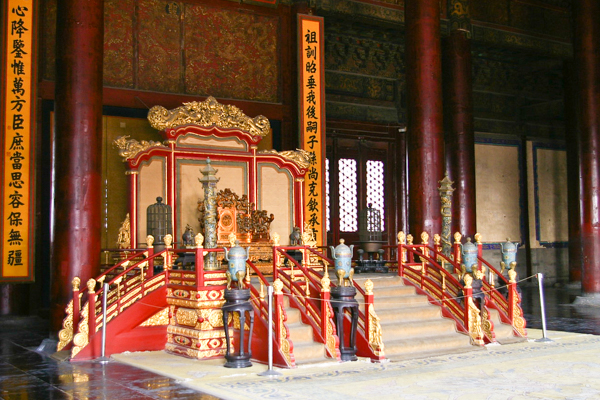 Many ceremonies and examinations took place in the Bao He Dian, or Hall of Preserved Harmony. It had beau coup roof critters on its roof!

Upon leaving the compound (and elsewhere) we were besieged by professional beggars. We even began to recognize some "pitiful" individuals who seemed to have no problem getting around to tourist meccas.

A few times we even saw children in training with their mothers giving them instruction on techniques.

From Beijing we made an excursion to the Great Wall.