I didn't get any pictures of the town on this trip. We were lucky to visit Bariloche again in 2008 and I do have one picture from that trip. One of the disadvantages of film photography, as opposed to digital, is that I was stingy with pictures on account of the cost and bulk of film. Those were not "the good old days," although I didn't know it at the time.

Three of us ladies: myself, Penny and a woman whose name I can no longer recall, signed up for a horseback riding excursion at a local estancia. It was a great outing followed by an informal gathering with other estancia guests around mate (ma-tay), the Argentine national beverage. It's an acquired taste.

This sheep ranch was, like many others, founded and developed by English immigrants. During the Peron years many British-descended landowners were forced out, but as I recall this particular ranch remained in the hands of the founding family. 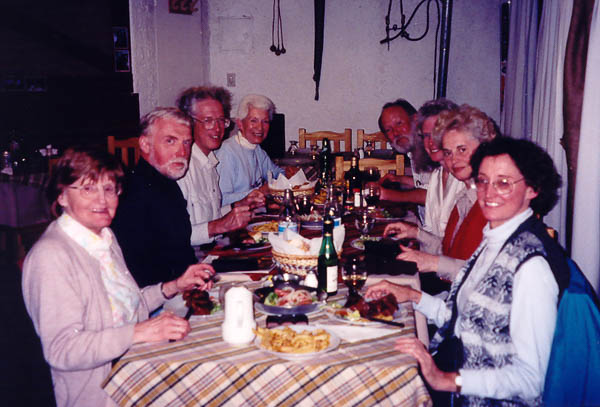 As befits the Potomac Valley Skiers (and Eaters) we had many good meals together while at Bariloche. I don't remember the name of this parrilla, but it was good. There was also a killer fondue place that we visited twice.

But all good things come to an end and we were eager to continue our journey to Buenos Aires.