The ski areas were spread across both sides of two valleys. An online trail map gives an overview. The snow cover was pitiful, so we weren't able to visit them all. Jim skied the First (pronounced more-or-less like FEARst) area on a day that I was sick. I skied the Schilthorn with a friend, but Jim elected to pass on the summit and joined us at Birg. 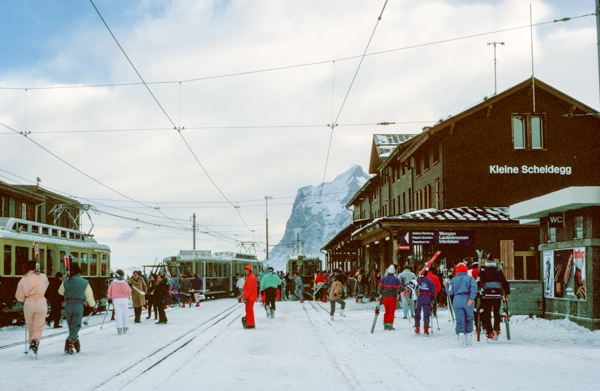 Unlike most European ski areas, which require a bus ride to get from the hotels to the slopes, Interlaken used railways — both cog & friction — plus a pair of funiculars.

For railfans like us, this was heaven (with skiing too!). Check out my pictures of the various railroad lines and the wonderful places they took us.

Kleine Scheidegg was a major transfer point for the trains and the base of several lifts. 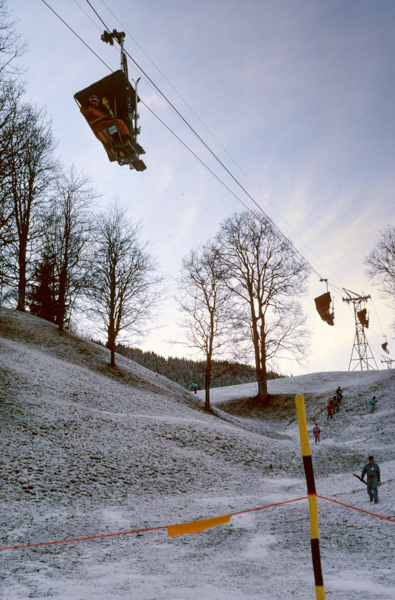 We had gotten a dusting overnight but that's all. People walk down the last bit of slope to the lift base.

This is the lift from Grindelwald to the First area. Jim is in the chair and is waving to me. The chair is sideways on the cable and was loaded somewhat like a gondola. Skis go into the carrier on the side of the chair, passengers sit and are wrapped with blankets against the wind as they close the safety bar.

This lift made a couple of turns in its ascent rather than being built in a straight line.

It has since been replaced by a modern gondola. 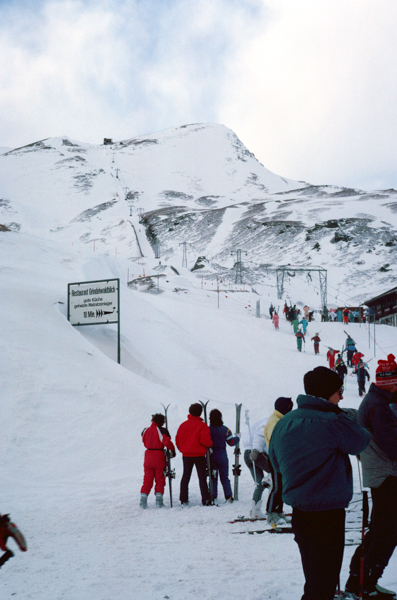 The Lauberhorn area has been the site of an annual race meet since the late 1920s (or so).

I don't think we tried that one out. 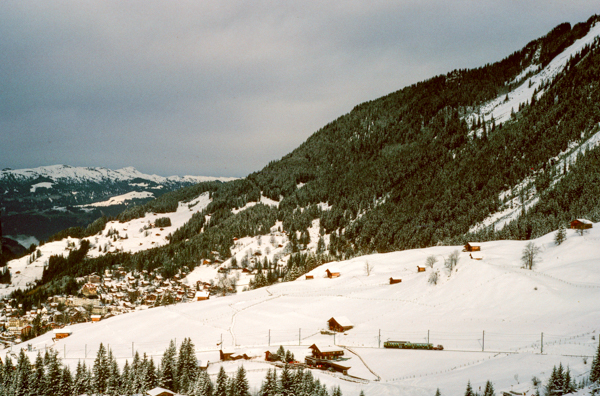 We did ski in this area down from Kleine Scheidegg toward Grindelwald. The trails more-or-less ran along the rail line. One of the trains can be seen in the picture.

I remember climbing over the train tracks, dodging cow patties half-buried in the thin snow cover, and skiing through back yards.

European skiing at its most idiosyncratic! 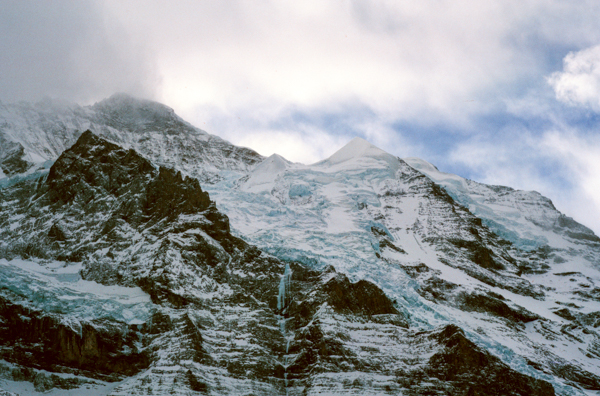 The Jungfrau up close and personal from Kleine Scheidegg. 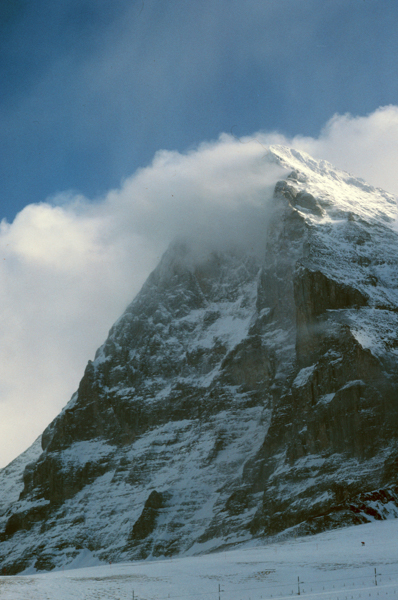 There will be a later picture with the "iconic" view of these mountains. 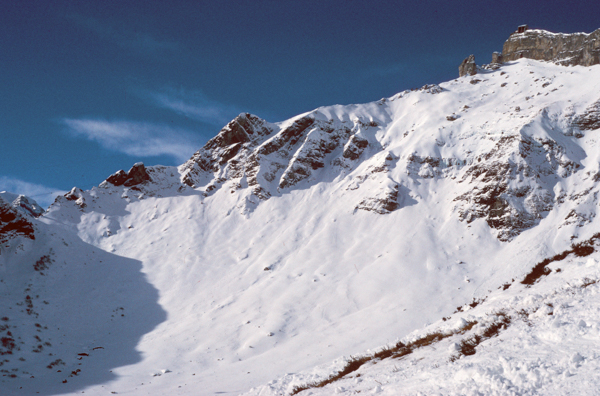 The top of the cable car at Birg is perched on the cliff at the upper right. From there we took the cable car to the summit of the Schilthorn.

This is the view from the observation platform on the Schilthorn looking away from the Jungfrau.

The revolving restaurant on this summit was used in the film On Her Majesty's Secret Service. There was a hair-raising ski run down that I couldn't wait to try.

Jim thought I was nuts and didn't hesitate to say so. 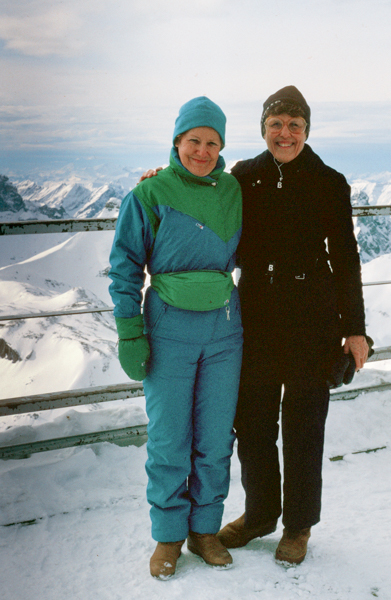 We met our friends Mary Jane McCarthy and Alice Swalm up there. They had taken the cable car up, but had no plans to ski down. Jim graciously agreed to escort them on the lift back to the Birg summit.

The airlines lost Mary Jane's boots on the trip to Switzerland. She tried rentals, but they almost crippled her. I seem to remember that the boots never turned up so she bought new ones for the rest of the trip.

Kirk Burns had also been looking forward to skiing the Schilthorn so he and I skied down together. I wasn't as good a skier as Kirk, so I don't think he got quite the trip he had envisioned, but I had fun and I hope he did too. 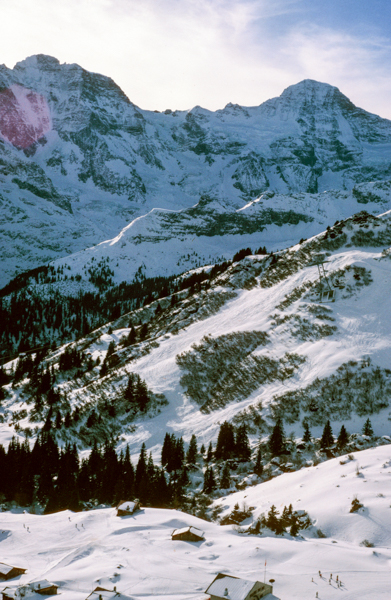 Kirk and I met Jim below Birg and skied down together. 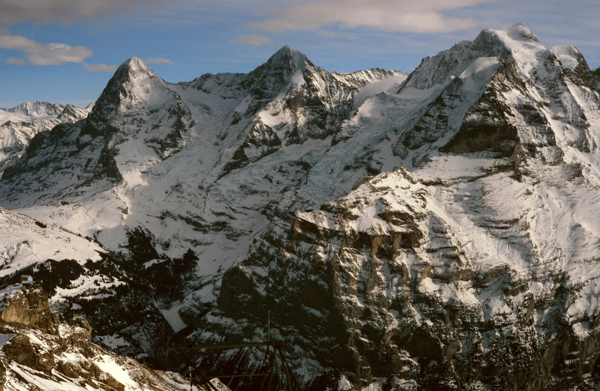 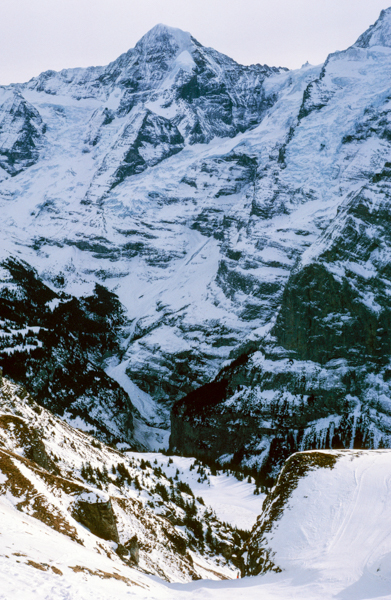 Skiing into Mürren with the Mönch in the background.

When a friend saw this image, she said that when she took photos of steep runs the pictures always made the runs look a lot flatter than they seemed at the time.

I don't recall if this run was any steeper than it looks in the photo, but I do remember that it was challenging! 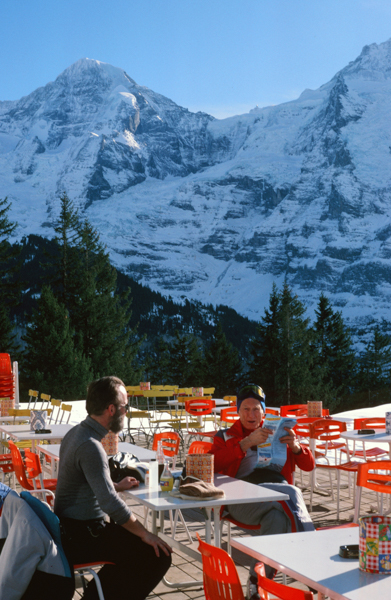 We had a good snowfall one night. At ordinary ski resorts, the ski patrol uses dynamite or howitzers to trigger potential avalanches before the skiers get on the mountain.

Here they have a somewhat different approach. A Swiss Air Force base is in a nearby valley. Jet jockeys are always eager to fly up the narrow valleys SUPERSONIC so that the shock wave brings down any loose snow! We heard the booms starting that morning at breakfast.

Jim, Kirk and I were having some quiet time at this cafe planning our next runs when one of the jets came screaming straight up out of the valley right beyond those nearby trees.