Our move to California was the beginning of a six-year drought in the western states. The skiing was really lousy at Lake Tahoe and only marginally better in Oregon. Some years, such 1987, there was not enough snow for Mt. Bachelor to open for Thanksgiving. A few times we skied in the rain. At all times, however, there was something to see and do. 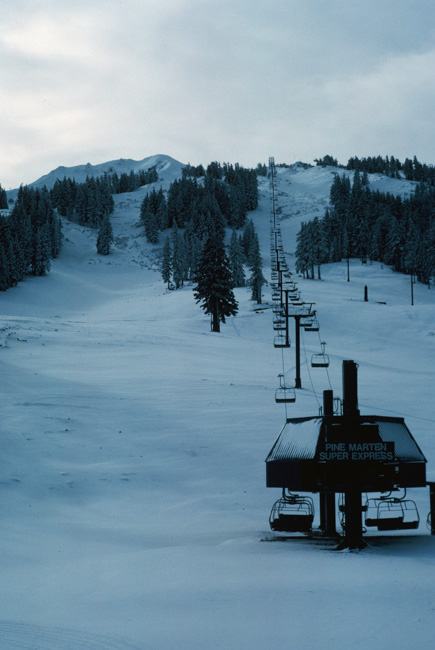 There was some snow, but not enough to open the mountain. Even if the summit had adequate cover, there was no way to get there but climb.

At least the ski shop was open and I got a nifty Native American themed vest that I still wear today.

We had to find other ways to amuse ourselves until we crossed the Cascades later in the week for wine tasting. 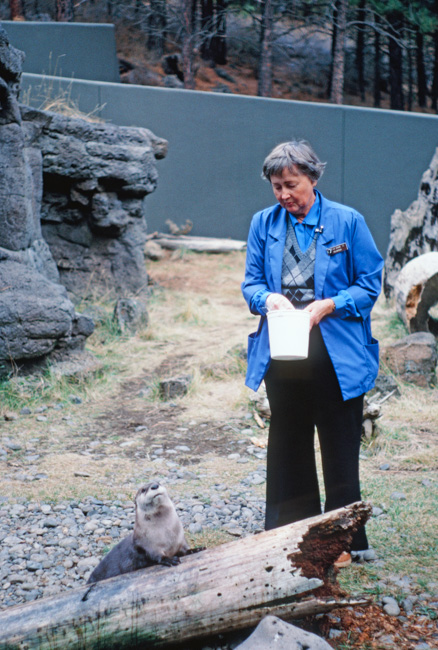 The High Desert Museum is a wonderful place to visit. They have animal exhibits and interpretive centers to describe the experience of the early settlers. We spend a morning there and could have spent more.

The otters were charming but another marvel was watching the docent cuddling a porcupine! Don't try that at home, kids! 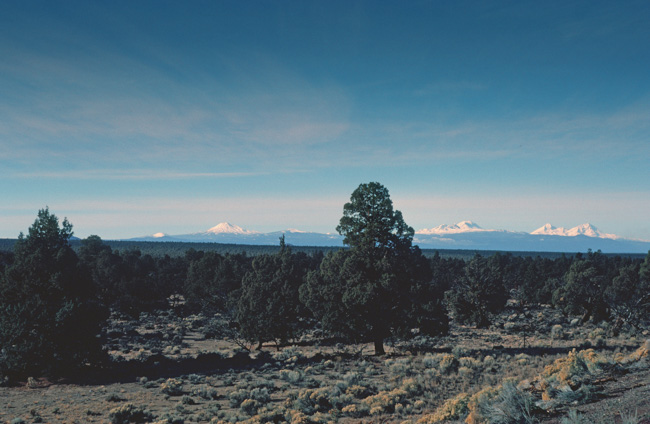 The view from the road near the museum shows the Cascade Volcanoes, none of which are considered to be active. Mt. Bachelor, technically Bachelor Butte, is the left-most snow-clad peak in this picture. The peaks include, from south (L) to north: Bachelor, Broken Top, South Sister, North Sister, Mt. Washington & Three-Fingered Jack. I can't point them all out and at least one is behind the tree.

The white blip to the left of Bachelor Butte may be Maiden Peak. 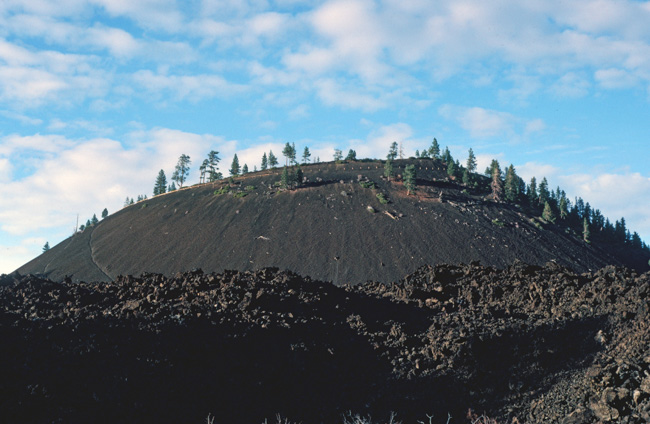 Our next stop for the day was Lava Lands. Although it isn't "open" in the winter, visitors can park in the lot and hike in. Oregonians do not coddle tourists as much as some other places. The centerpiece of the park is Lava Butte.

We had plenty of time and needed the exercise we weren't getting by skiing, so we hiked up to the caldera. 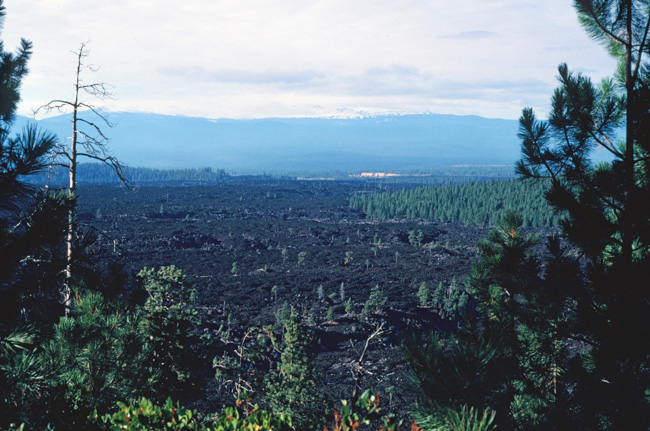 Clouds have moved in so it's not possible to see Bachelor anymore, but this shows the extent of the lava field created by the eruption of this volcano an estimated 7000 years ago. Trees are still struggling to gain a foothold. 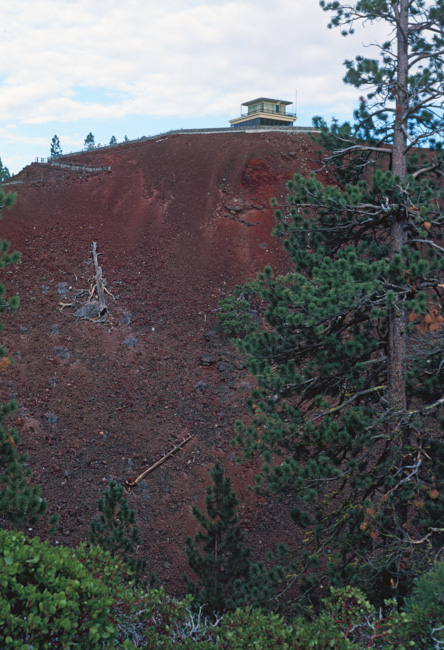 We were astonished when we reached the rim to see that the cinders on the inside of the caldera were red rather than black.

I don't believe we climbed all the way to the ranger station. 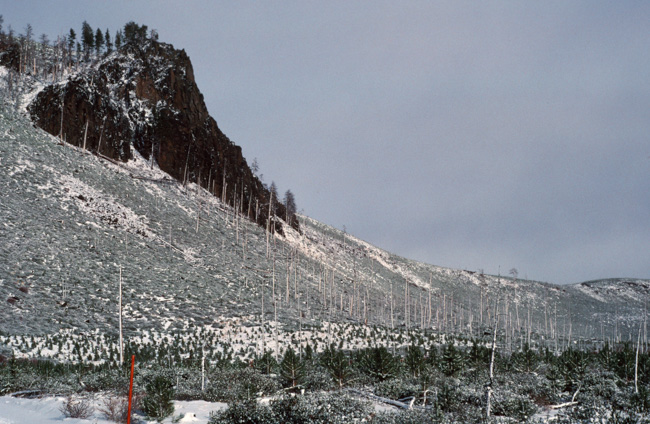 On another day we drove out to what had been a favorite beauty destination for locals: Tumalo Falls. In 1979 a devastating fire killed the trees and their subsequent removal seriously damaged the landscape.

For a number of years local citizens had worked to restore the area by planting many trees. The small young ones can be seen here. 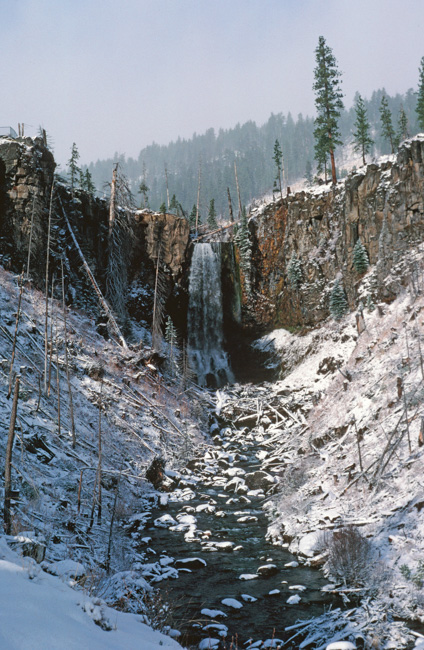 The falls themselves were still impressive although the barrenness of the surroundings was nothing like the pictures we had seen in its heyday. As may be seen at the link above, the area is beginning to recover.

On our most recent visit to Oregon in 2017, we dodged wildfires almost every day.

I'm not sure what river this is, but it has carved a path through the lava flows. The Deschutes River has had its path disrupted by lava, but I think it is a larger river. 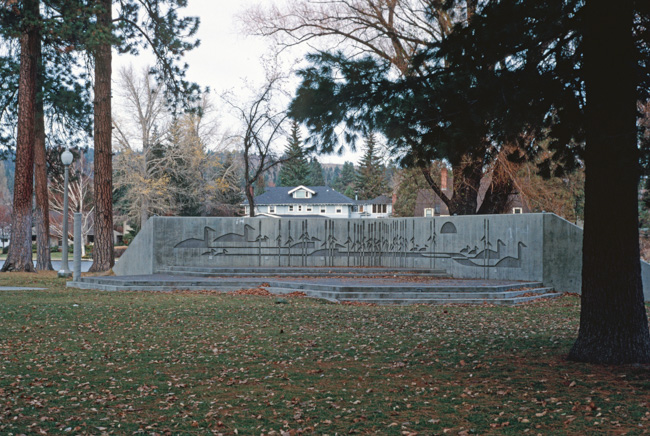 Drake Park is along the banks of the Deschutes as it flows through Bend. It is a beautiful and peaceful place in the late fall.

The park earned its name honestly. There is always a crowd of ducks.

At one time we had thought about retiring to Bend, but we didn't and are glad of it. Over the years it grew & grew and the character of the town changed. It may be much more hip now, but it isn't the place we fell in love with so many years ago.