Thanksgiving in Oregon became an annual event, and although we didn't make it in 1986, we did the following year.

First we had to get there. The snow report was not encouraging so we took a road trip on the way up. Rather than take the fastest route through central California on I-5, we drove up Highway 1 along the coast. We quickly learned why it is nicknamed "Dramamine Drive."

I don't think we passed a single fast-food joint and I don't even remember many stoplights in the various towns. 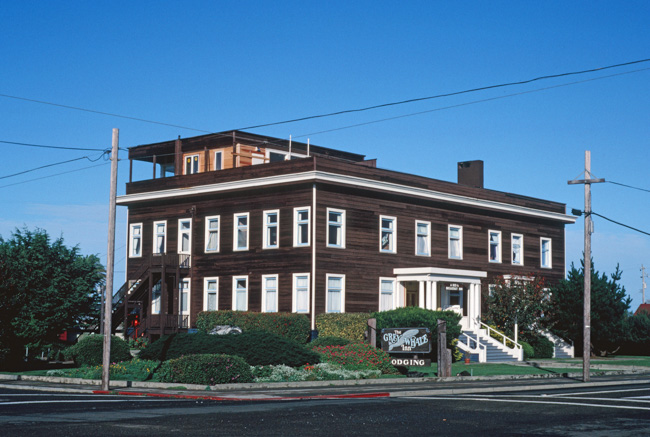 Our destination for the first night was Ft. Bragg where we stayed at the Grey Whale Inn. We enjoyed it very much and promised ourselves to come back to spend more time in Ft. Bragg. Hasn't happened yet, but on our recent (2017) trip back to California, a friend was singing the praises of Ft. Bragg, so it may happen yet. 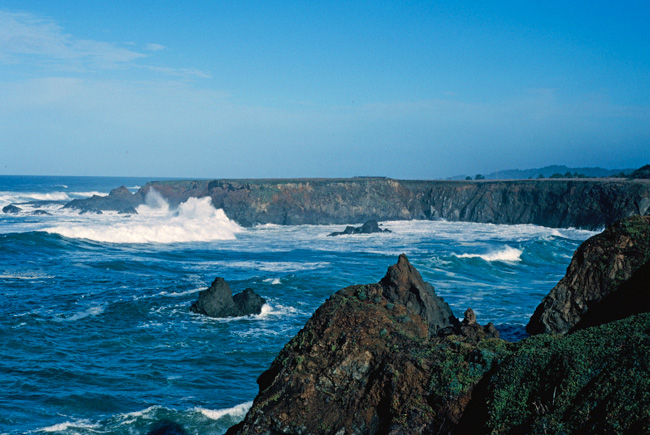 Just north of town is MacKerricher State Park. We walked out to the shore on this headland called Laguna Point.

While we lived in California I had a particularly stressful job. Whenever I had trouble sleeping, I visualized the walk from the parking lot, out over the bluffs with the sound of crashing surf, to this spot. It worked so well as a relaxation technique that I rarely made it all the way out to the point before falling asleep! 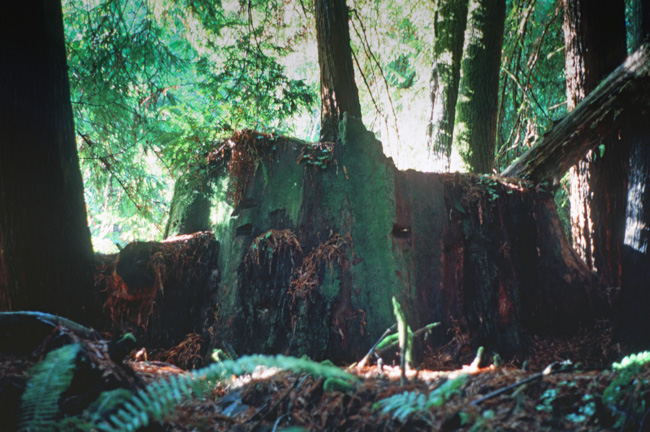 As we headed north we stopped at a demonstration grove of logged redwoods owned at that time, as I recall, by Louisiana Pacific. There was a walking trail through the grove and that's when I learned how, when a redwood is cut down, it gives birth to a circular stand of clones around the original stump as seen here. 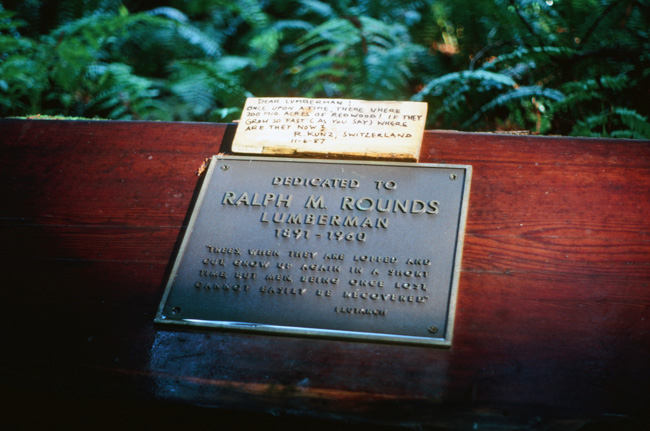 The grove contained this plaque to Ralph Rounds. Most links on the menu for this page are broken - apparently because the Mendocino Redwood Company (MRC), developer of the site has been bought out. For more info click for the new home page. MRC is now owned by the Humboldt Redwood Company, the successor to the Pacific Lumber Company. On our recent (2017) trip to Oregon and the California Redwoods, we learned lots more about the interplay between lumber companies and the environment.

The added comment: "Dear Lumberman, once upon a time there [were] 200 [million] acres of redwood! If they grow so fast (as you say), where are they now? R. Kunz, Switzerland, 11-6-87." Where indeed? We visited only a couple of weeks after this message was posted. I wonder how long it lasted? 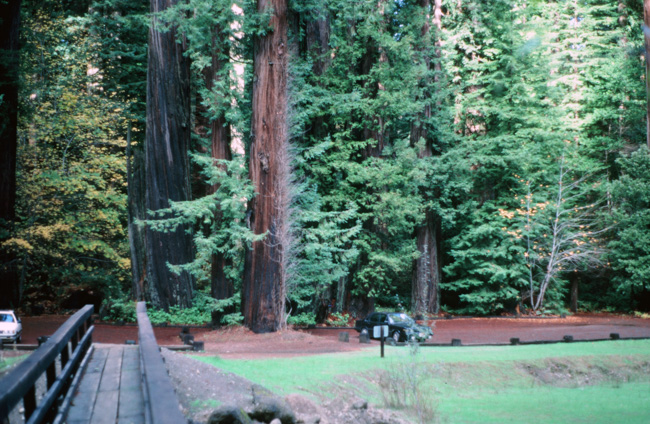 I believe this picture is from The Avenue of the Giants in the Humboldt Redwoods State Park. My camera was unable to capture even a smidgen of the trees, but the scale can be seen by our black Audi in the parking lot.

We didn't even bother bringing our skis on this trip. 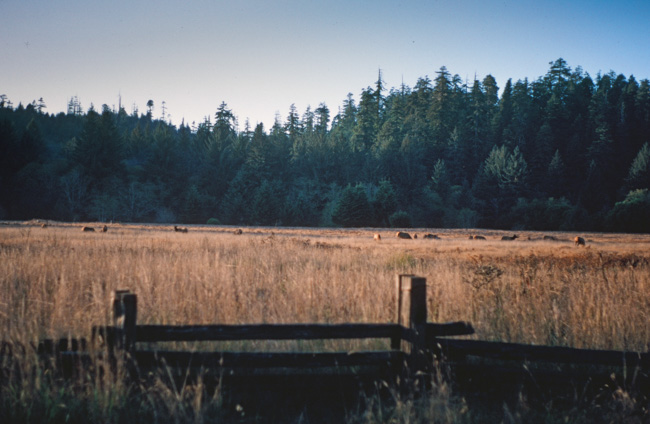 Roosevelt elk are frequently found in this meadow north of Orick, California. On the 2017 trip referenced above we found a large herd of elk in the exact same meadow. 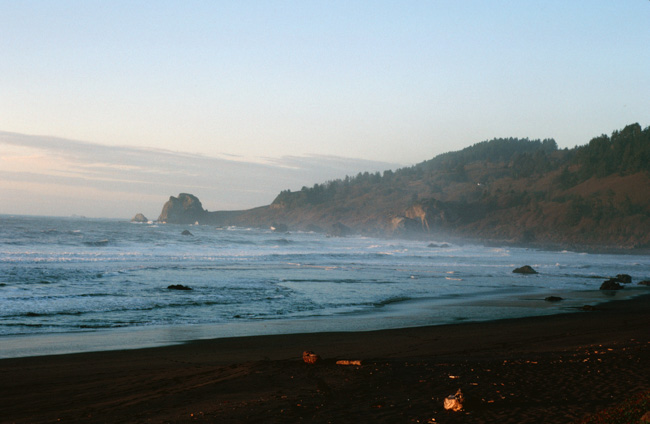 I can't recall which beach this might have been. It was probably not far south of Crescent City.

This was late in the day. I know we didn't drive into the night, but I don't remember where we stopped -- probably Crescent City. We stopped there several over the years and had a favorite eatery appropriately named Jim's Bistro.

The following day we visited Crater Lake on our last leg into Bend. It had finally started snowing in the Cascades! 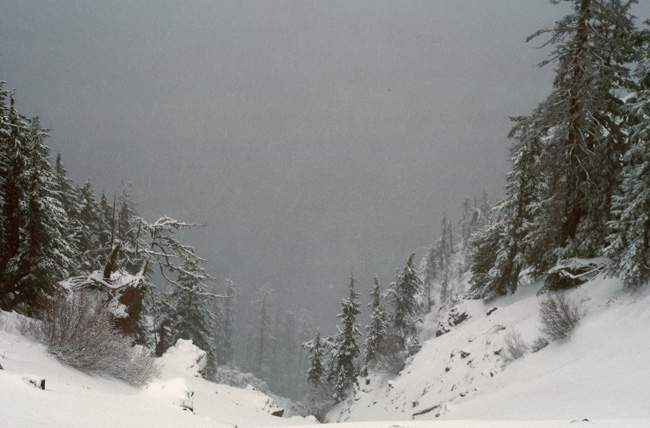 The view of the lake was somewhat compromised by the weather!

The only thing we were able to see was a fellow Tandem employee who was also traveling with his family for the holiday week. They were as disappointed as we were.

Needless to say, the rim drive was closed. 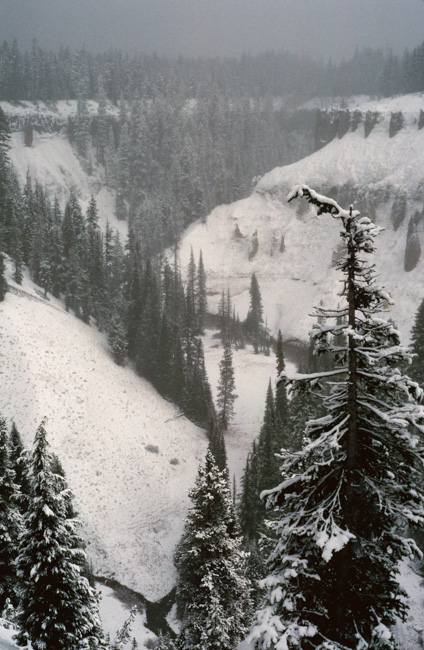 The drive from the park to US-97, which would take us to Bend, was treacherous in the snow. The striking chimney-like formations across the creek are fossilized fumaroles. There are much more dramatic formations elsewhere in the park, but they were not accessible during the winter.

A jaunt to Crater Lake is not something to take lightly this time of year. It is not on the way to anywhere.

That night we reached our destination: The Inn of the Seventh Mountain outside Bend. At the time, this was a collection of condo units managed as a hotel. The last time we visited, they were converting to a time-share. It appears that they are now back to a condo structure.