As I described in the album dedicated to our 1980 Gulf Coast excursion, we made an annual visit to spend a week with my folks in Biloxi, MS. Many of those trips included a weekend in New Orleans. In 1983 our focus was on ferries. 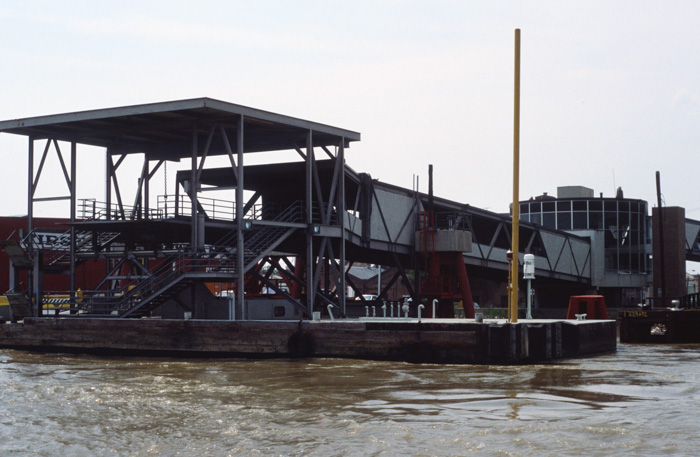 Our first ferry ride was from Algiers Point, LA, across the Mississippi to Canal Street. I don't have a picture of the actual ferry, but this is the loading dock on the Algiers side.

The ferry has been in operation since 1827. It no longer carries cars.

On this particular visit we did not stay at the Hotel Monteleone, but at the Soniat House. My friend Kathryn Grabau had told us about this small inn and we found it delightful. Unfortunately by the time we "discovered" it, it was under new ambitious ownership and was soon priced out of our range.

On our first stay we had a room in the front that opened onto the balcony to the right of the upstairs door. Very nice -- especially in the evening as we sipped drinks on the porch and overlooked the activity on Chartres Street.

On this trip, however, we had a room that didn't overlook much of anything on the back of the house. It was an interesting room, but hardly luxurious. Looking at the current web site, I expect it has been incorporated into a suite. 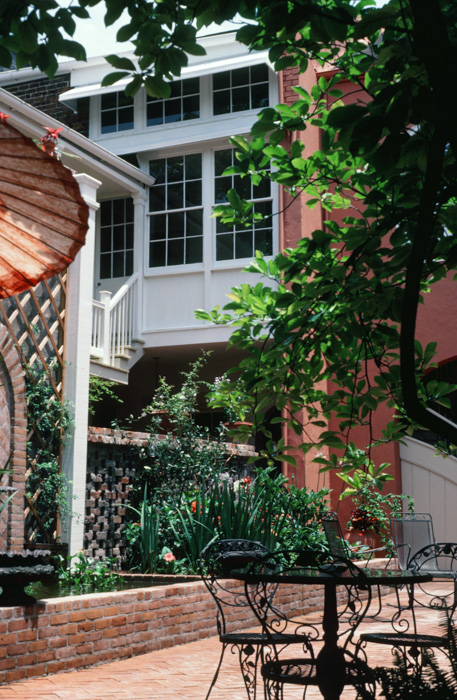 A view of the patio. Our room was just under the roof behind the awning. We could look out the three short windows, which were at floor level in the room.

As I recall there was an honor system bar setup in the patio -- a great place to sit and sip. The breakfast was also mighty fine. 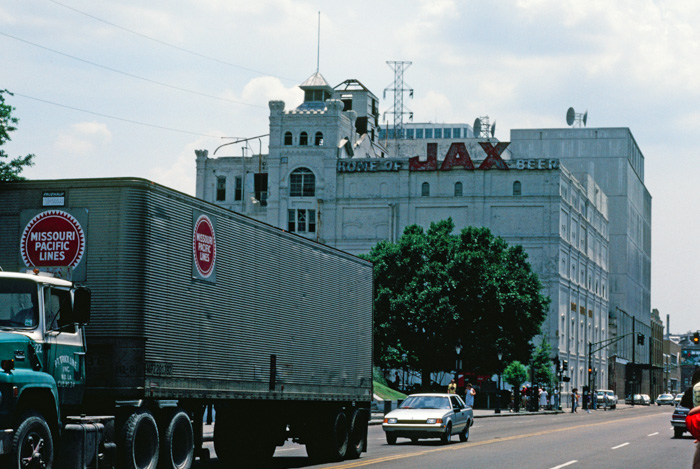 The Jackson Brewery was closed and the building was derelict. It has since been converted into shops and connected to the river walk that meanders along the levee from the convention center to the French Quarter. The area is thriving again. 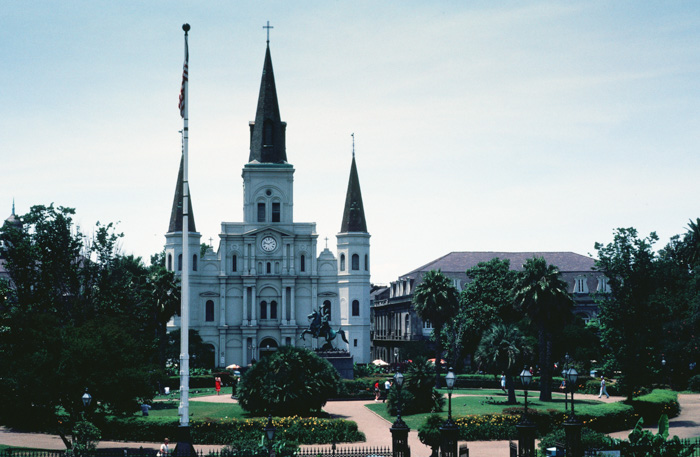 General Andrew Jackson is quite a hero locally as he commanded the U.S. forces in the successful Battle of New Orleans.

The statue of Jackson in the center of the square is one of three made. It was a technical marvel when made. The original is in Lafayette Square, DC. Activists in recent years have called for its removal. 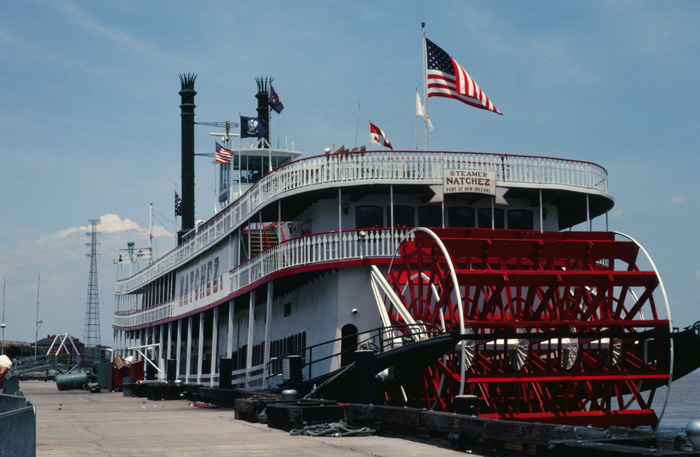 We decided to do the tourist thing and booked an excursion on the Steamboat Natchez. It isn't exactly a ferry, but it seemed to fit with the overall program.

The ride was fun. We enjoyed listening to the calliope, touring the engine room, and watching the paddle wheel churn up the muddy river water.

We saw many sights in the port that we would not have otherwise seen. 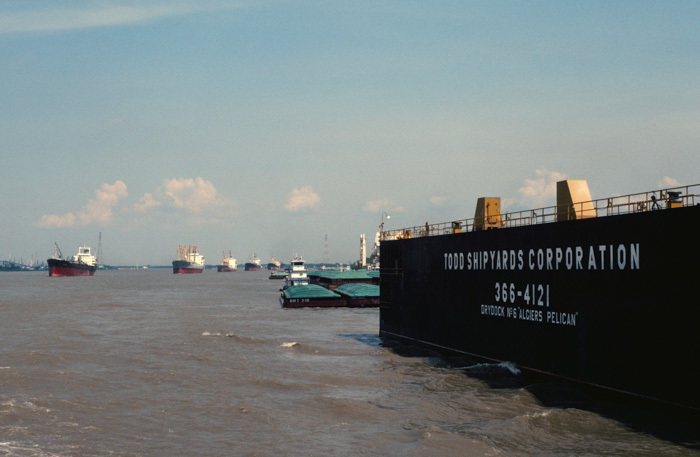 The ports around New Orleans are huge. The Port of South Louisiana alone is the largest in the US by tonnage. That doesn't include the Port of New Orleans (6th in 2013) and the Port of Plaquemines (10th). Together in 2013 they carried 372.7 tons, a third more than the next largest (Houston, TX). South Louisiana on its own was the 13th largest port in the world from 2003-2013.

All the people who said that New Orleans and southern Louisiana should just be abandoned after Katrina had no idea what the impact of that would be. No matter how vulnerable the area is, it is essential to the US economy.

Ocean-going vessels wait to be loaded and depart for the rest of the world.

Shipyards drydock. This looks like a VERY large twin-hulled vessel. 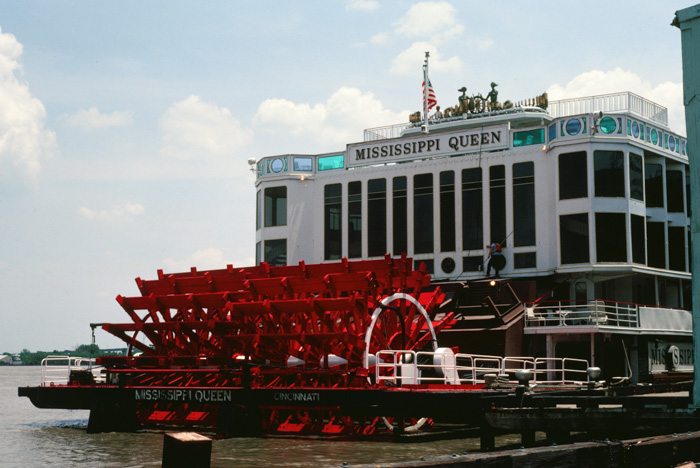 The Mississippi Queen was also in port.

She was taken out of service in 2001 and scrapped.

We have always wanted to take a river cruise on one of "the queens," but our choices are becoming limited. The American Queen is still in operation, so there's hope yet.

We did at least get to spend a night on the Delta Queen at her dock in Chattanooga a few years ago. As of 2020 she was being refurbished to return to service. 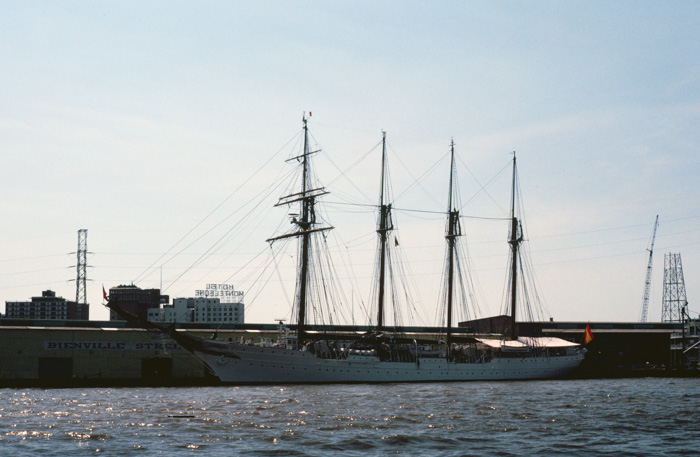 Another ship in port was the Juan Sebastian Elcano, a sailing ship used by the Spanish navy for training. 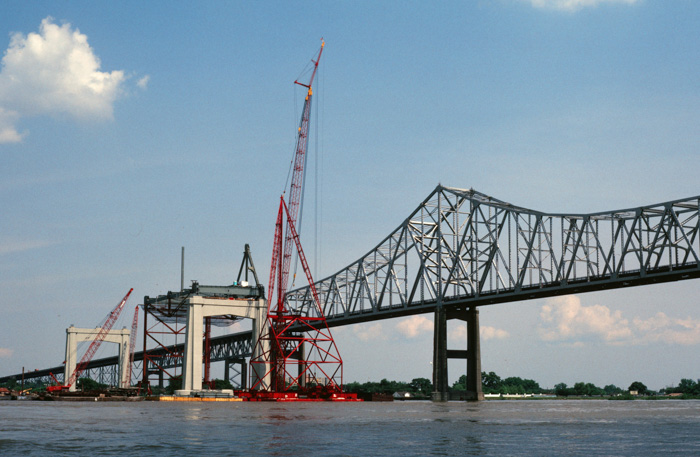 The pair of bridges that became known as the Crescent City Connection. Construction started in 1981 and was supposed to be finished in 1984. Guess what? It wasn't. The second span opened in 1988. 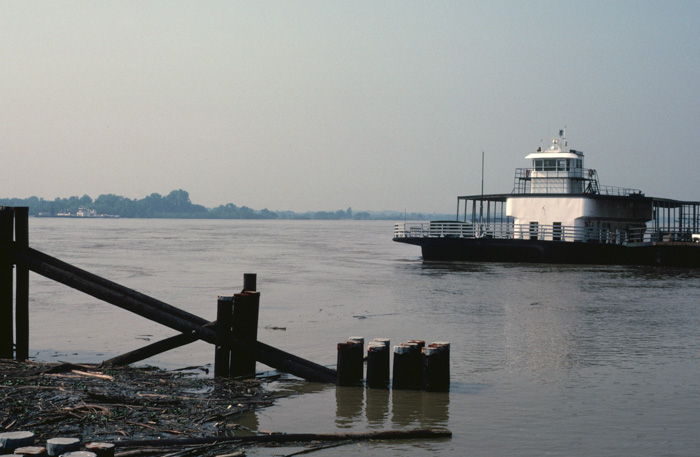 Our program was to drive toward the mouth(s) of the Mississippi using ferry crossings wherever possible. Our first crossing was at the Belle Chasse - Scarsdale Ferry just southeast of New Orleans.

This took us to the east bank of the Mississippi. We then proceeded down LA-39. 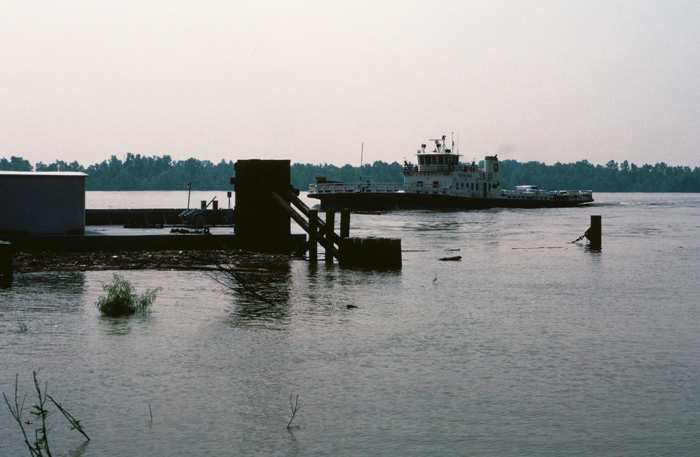 The paved highway on the "east" bank ("west" and "east" are somewhat relative in an area where the River twists and turns through the points of the compass) peters out not long after the last ferry, so we crossed a final time at Pointe à la Hache. The ferry is coming into its dock. 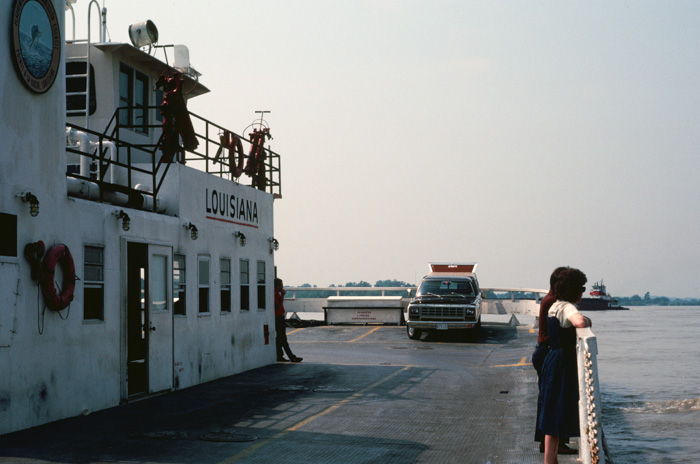 This ferry was shut down for a while in 2013 due to hurricane damage to the landing. Its long-term future is still in doubt. There is wrangling within Plaquemines Parish about the maintenance cost of having two ferries at Belle Chasse & Point à la Hache. 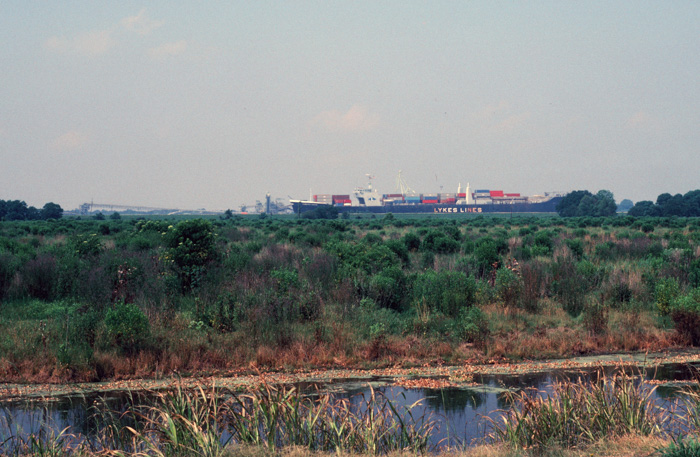 I couldn't resist this shot of a massive container ship navigating through the swamp.

The Mississippi River was at flood stage at the time so for the entire trip we were below the water level.  This is not uncommon in these parts, but it spooked Jim a bit! Some folks are just used to living above sea level.

There was water seeping through the levee and across the road at spots, but the residents were calmly mowing their grass. He was somewhat reassured. 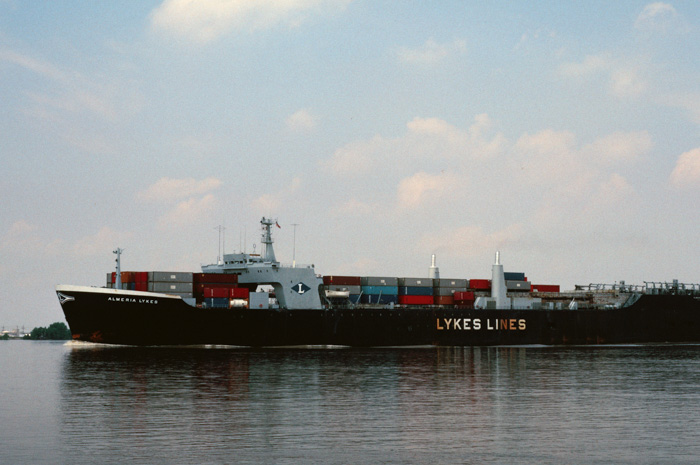 Here's a closer shot of the same ship.

We had a vague notion of going as far toward the mouth of the Mississippi as we could get, although mouth is a rather complicated term when applied to a river that size. (There are at least four defined exits. The official "mouth" is designated the Head of Passes.) We ran out of time although we got as far as Fort Jackson before turning around and heading back to New Orleans.

We still chuckle about TFs (toll ferries) and FFs (free ferries) as they were designated on the AAA map that we used to navigate on that trip.