Anne and Alan were both from the Philadelphia area, so they elected to head up the interstate to visit family there. Fred and I took the ferry from Lewes, Delaware, to Cape May, NJ.

The ferries were large and modern. I don't recall if there was much of a wait on this trip, but I do remember one time I took this ferry on a summer weekend and the wait was a couple of hours. People had planned for the delay and there were parking lot picnics and a lot of Frisbees flying about. 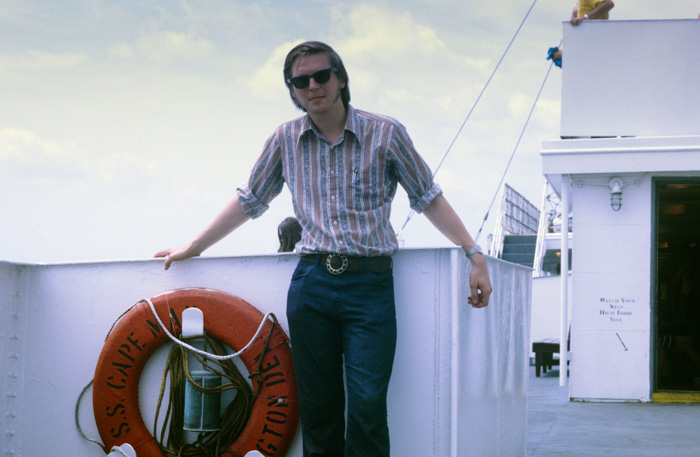 Some people spent the trip in their cars, but there was plenty to explore on the ferry. Fred is enjoying the fresh air.

The S.S. Cape May doesn't appear to still be in service on this line. 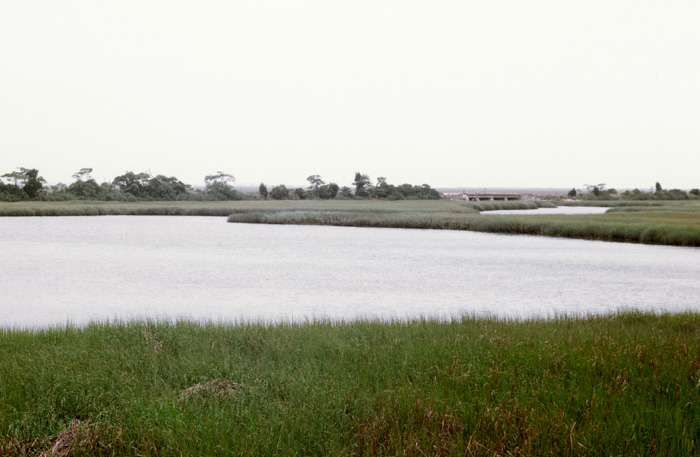 The trip up through New Jersey was interesting. Jim divides the state into two parts: "the dump" and "the swamp." I guess this would be the swamp.

For the most part we avoided the Garden State Parkway and stayed on the local roads. There were miles of wetlands punctuated by beach towns. I particularly remember driving through the Wildwoods.

Eventually, however, we got bored and hopped onto the parkway. 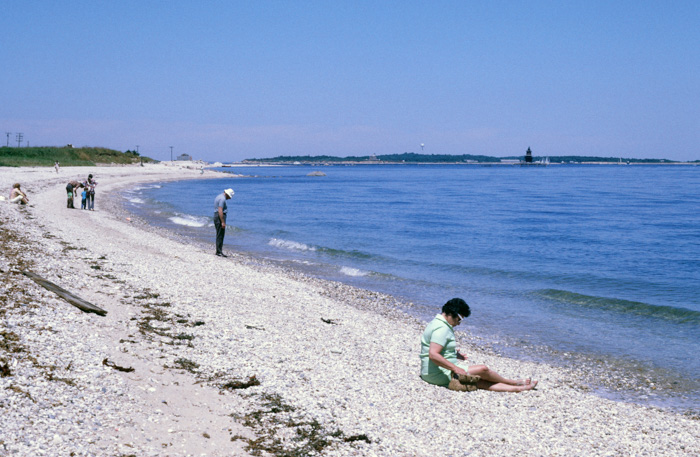 I don't remember if we had a stated purpose of taking ferries, but our next "destination" was the tip of Long Island where we took a ferry from Orient Point to New London, CT.

I do remember quite a wait for this ride. Many people were lounging around the shingle beach waiting for our ship to come in. 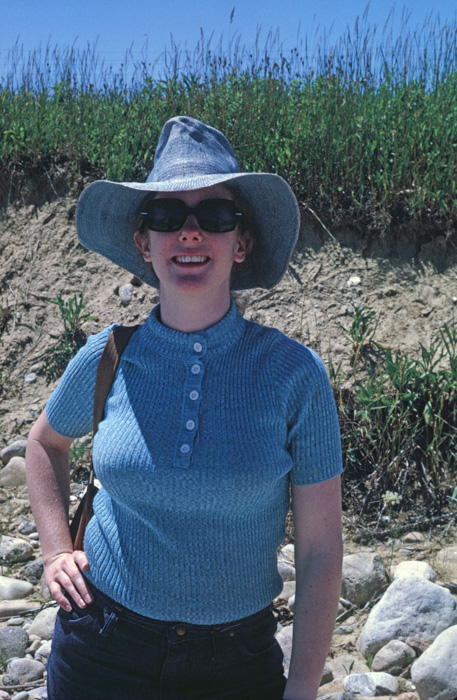 I loved that floppy hat. It may have been disreputable, but it kept the sun away and it lasted for a surprising number of years.

Back in those days I wore contacts and could sport stylish shades.

No ferry. It was a long wait.

The rougher waters can be seen just beyond the pilings. We are right at the edge of Long Island Sound. 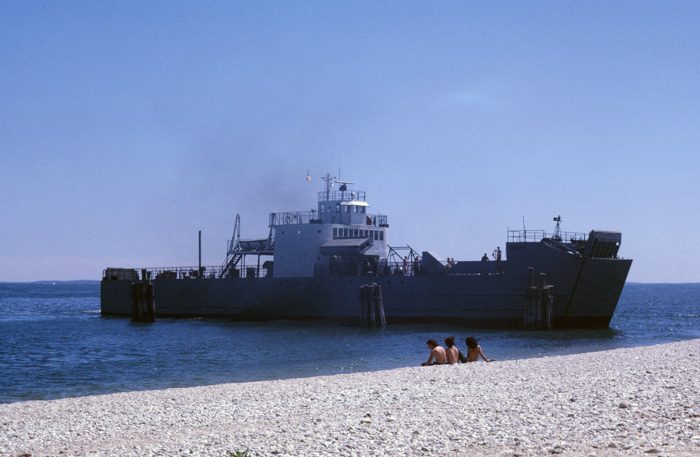 Yea, the ferry has arrived! We could see the black smoke when it was well away from the dock and immediately named it the S.S. Pollution. This ferry line has much newer vessels today including one from the Lewes-Cape May line that looks remarkably like the vessel that we took to New Jersey. I wonder if it is the same one. 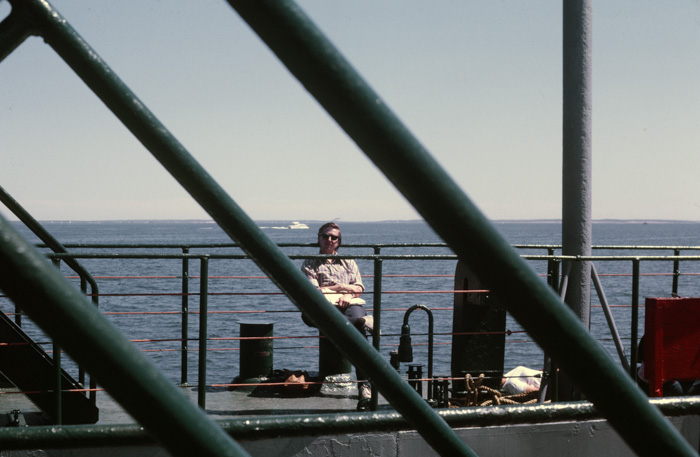 The accommodations were rather more spartan than the earlier ship.

Fred was the first person I ever knew (but far from the last), who legally changed his name. His original name was Witkowski and the family was obviously of Polish extraction. As soon as he turned 21 he started the paperwork so that his college degree would be in the new name. When I asked how he picked it, he said he wanted to keep the last initial of 'W" so he just blindly opened the phone book to the Ws, closed his eyes and ran his finger down the page. Voila: "Whitney."

He made no bones about the change. Once someone asked if he was related to the so-and-so Whitneys and his response: "Lady, I'm not related to ANY Whitneys!"

I, on the other hand, was determined NEVER to change my name.

Our first major tourist stop of the trip was Mystic Seaport.

This is a wonderful maritime museum that I had visited before with my family. The large ship shown here is the Charles W. Morgan, a 19th century whaling ship. 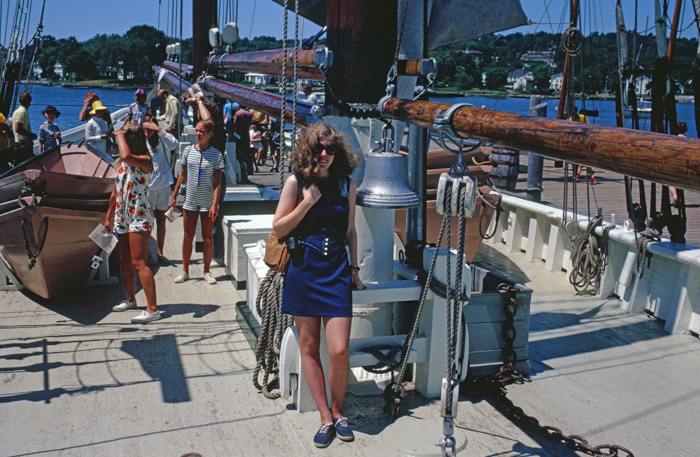 This was clearly in one of my long-hair periods. 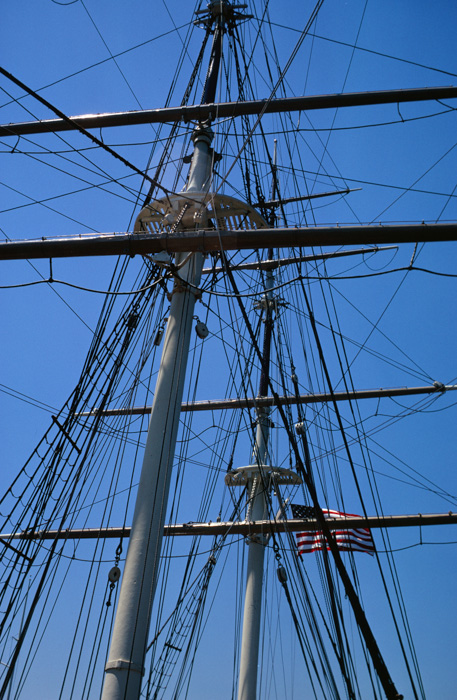 Back when I took this picture, I never dreamed that someday I would be living in a Virginia town named Catharpin after a bit of ship's rigging. It's a shame that the Wikipedia entry doesn't show an image of the cat-harpin, but as it was explained to me at a much later date, it is the small bracket just below the lowest spar on each of the masts. The closer one is easier to see. 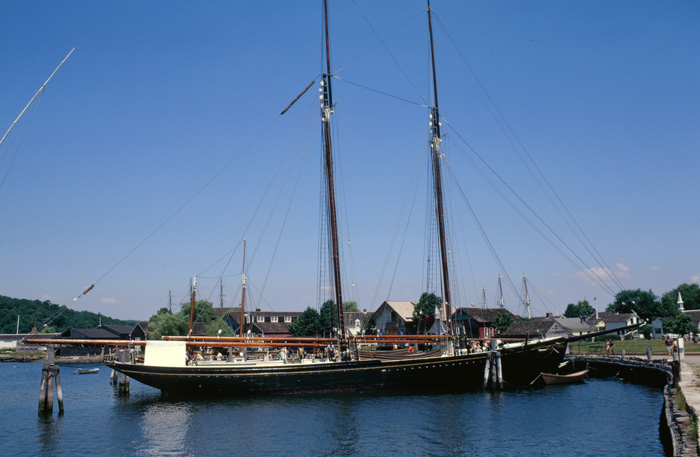 Another ship preserved at Mystic is the L. A. Dunton. It was a fishing schooner that was active until the 1930s. 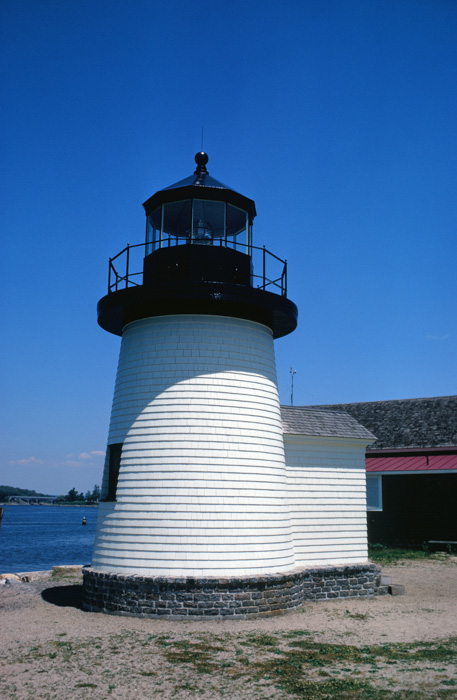 This lighthouse at Mystic is a reproduction of a light that still exists in Nantucket and is still in service. 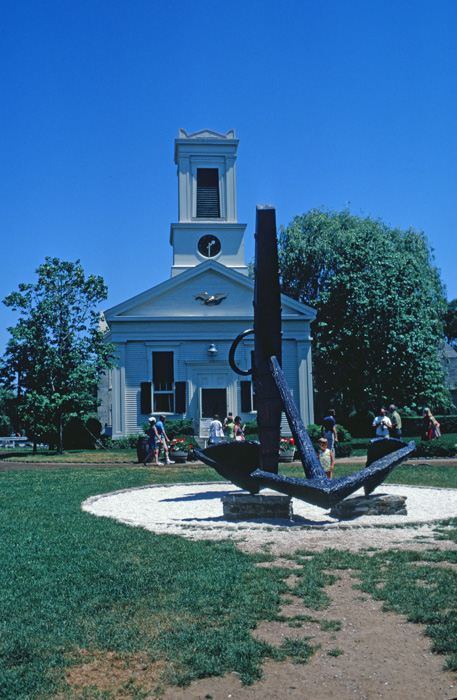 This old church has since been moved to a new location and restored. The anchor was moved with it.

Continue with us to Massachusetts and Maine.