Summer in Germany
Kochel am See

Kochel was a small resort town by a beautiful lake on the edge of the Bavarian alps.

Students at the institute stayed in rooming houses throughout the town. The quality of housing varied quite a bit, but I think our place was pretty typical. The facilities were not what Americans expected in many ways, but I can only speak of my own experience.

As I mentioned earlier, my roommate was Japanese. Her name was Sonoko Uchida, but her nickname was Peco. Her German was excellent and she had corresponded with a German pen-pal for many years. She even assisted in a German language school back home in Tokyo. In addition she was a fine roommate with a gentle sense of humor and unending patience with my stumbling attempts at communication. However much I learned over the summer was due more to her than the instruction at the institute. I'm sorry I don't have a picture from the day that she insisted on dressing me up in a kimono!

It was a stiff (and steep) walk from our house to the school. When I first arrived I was pretty soft, but by the end of the summer I was fit.

There were also plenty of hiking opportunities around town and into the mountains. I spent a lot of time walking around on my own -- even in the rain that was so common in the summer of '68.

The following pictures are of the town. 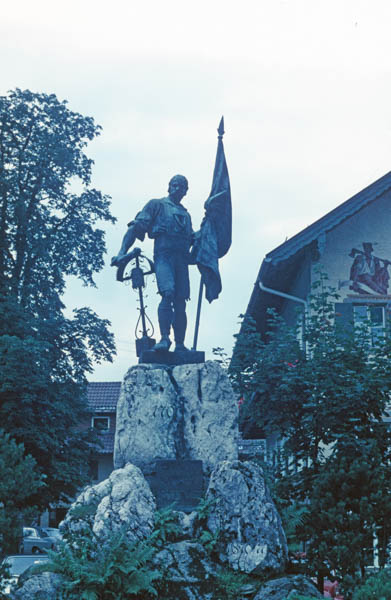 The "Schmeid von Kochel" or Smith from Kochel was a local hero. According to Wikipedia he was a legendary figure rather than a specific individual. (The German version of the article is identical but includes much more information about art featuring this individual. This is his memorial in Kochel itself.) 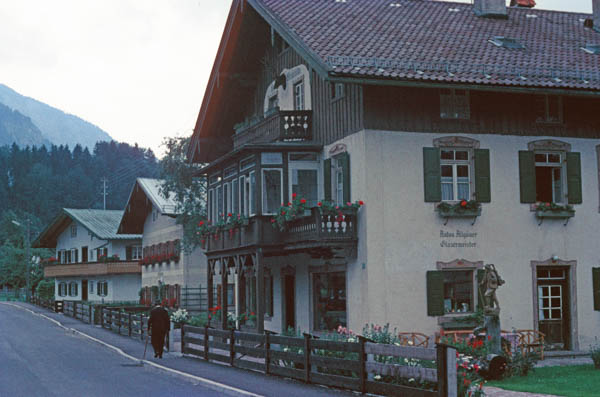 This was my home away from home during the summer. Our room was on the opposite side of the building on the 3rd floor. It was a spacious room, but had no heat and it was a cold summer. The toilet was across the hall, but we had a sink in the room -- cold water only. Brr. 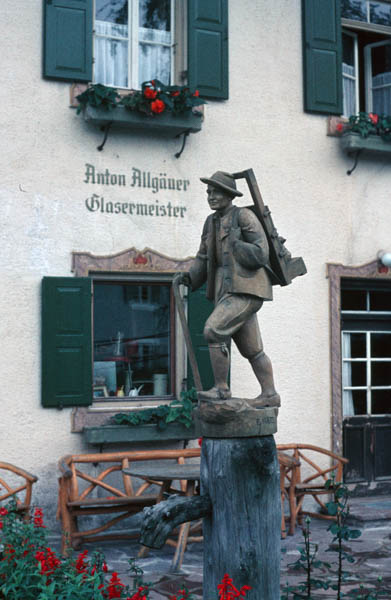 The owner was a master glazier by profession.

The bathroom was on the ground floor and we were allowed to take a bath only once a week. Peco was appalled as the Japanese are VERY fond of their daily baths. We had to pay 2DM (about 50 cents) each time to cover the cost of the fuel for the wood-fired hot water heater! AND feed and stock the fire.

Our assigned bath night was the same as the family, so luxuriating in a hot tub was out of the question. There were constant admonitions to hurry and not use all the hot water.

The decor in our room was basic: Two beds with heavenly German federbett comforters, a table, and a chair. For those who have never experienced federbetten, I cannot adequately describe them. I can't find any useful online pictures (and why would I have thought to take a picture of the bed?).

Peco brought supplies for making origami, and she taught me many different styles. We made a batch and I fashioned a mobile to perk up the decor a bit. 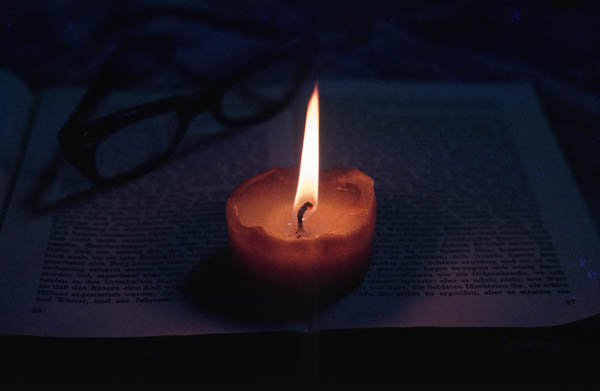 Nowadays this makes me shudder. If I had to read after Peco was in bed, there were no bedside lights so I would light a candle. I'm glad I didn't burn the house down! 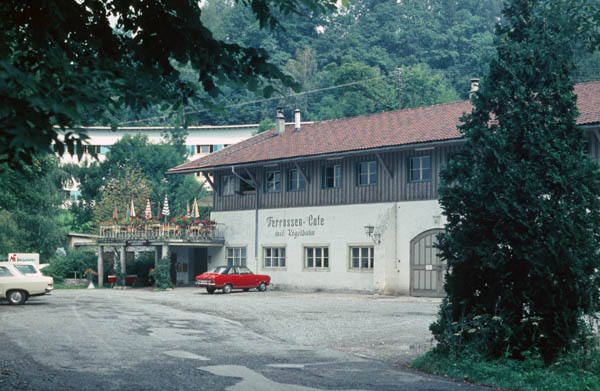 Two restaurants hosted students for dinner. The Gasthof zur Post was pictured on an earlier page. This is the other one: Terrassen Cafe mit Kegelbahn. It also housed the local bowling alley!

We were divided into two groups and rotated every two weeks.

My class at the Goethe Institut met in the front left of the door where the window is open. My level was "Grundstufe Zwei," which was a step above rank beginner. Somewhere I have a certificate that qualifies me for promotion to intermediate level if I ever decide to go back. 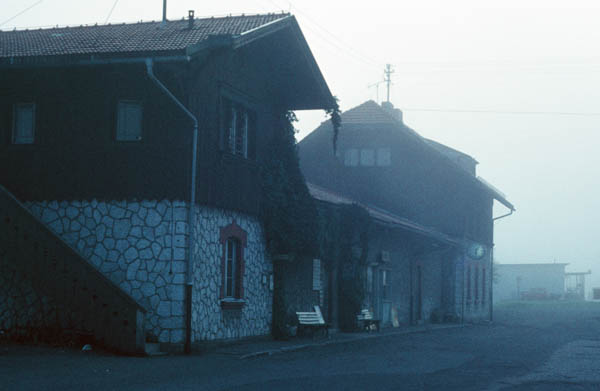 Another key location within Kochel was the Bahnhof. We were at the end of a spur line that ran south from Munich through Starnberg.

The railroad was our link to the outer world. 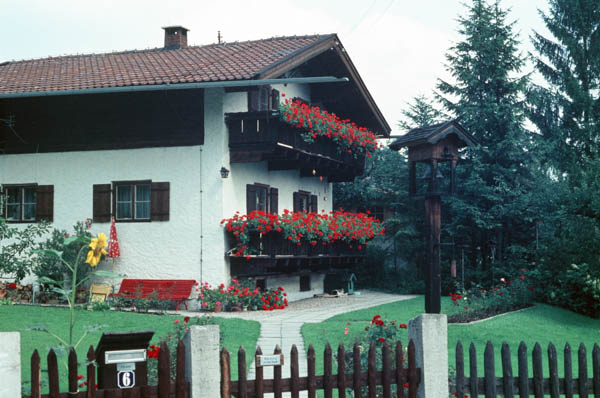 The following pictures were along the path I walked every day to class and elsewhere in Kochel. I'll use the commentary space to describe some of my fellow students (unfortunately I don't have pictures of them). 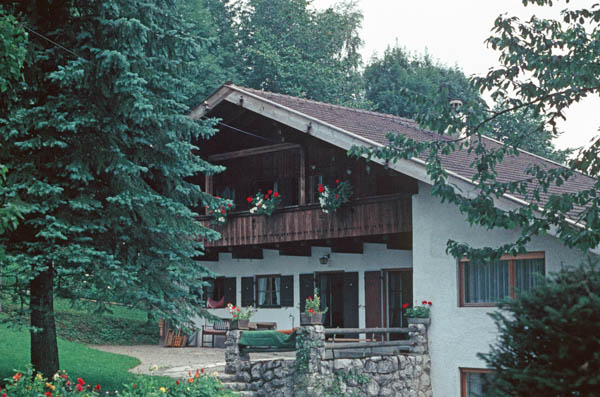 1968 was the year of the Prague Spring. A Czech couple in my class had been allowed to come to Germany to study, but had to leave their small children home with relatives -- somewhat as hostages. When the Soviets invaded their homeland during our school session, they were frantic to get status of family left behind. They left early to go home. 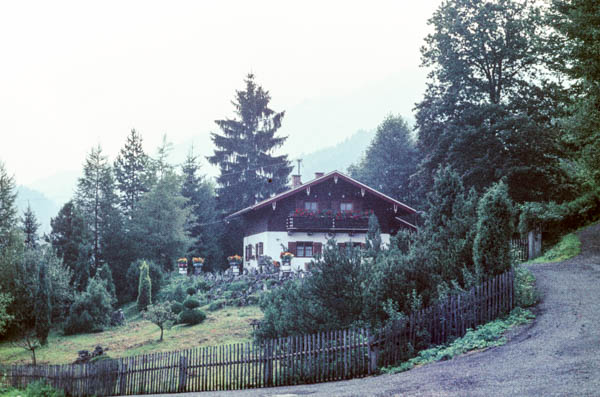 Another student in my class was a Dutch merchant marine sailor. German was to be his fifth or sixth language after Dutch, English, Flemish, French, and maybe one or two more. Although he started at our elementary level, by the end of the session he was fluently discussing history and politics with the teacher. 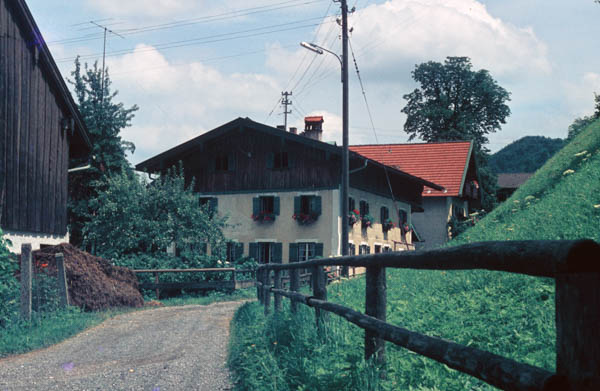 We had a small group that played bridge after supper. In addition to myself there were two other Americans: one from NC and one from San Jose, CA, and a Brazilian. Although we started in German with the best intentions, we eventually gave up and spoke English. 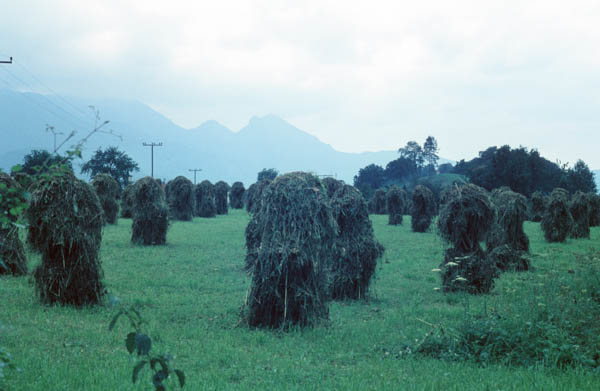 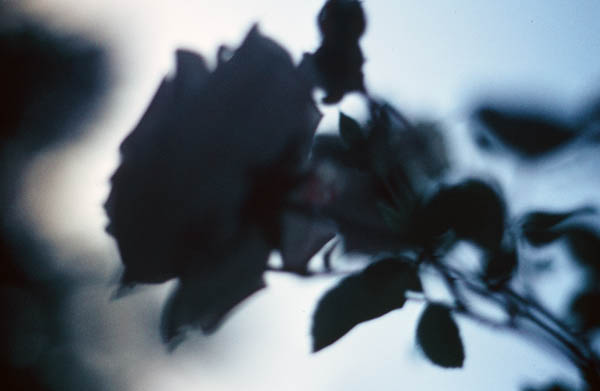 Roses were a popular shrub. I've always liked this picture. 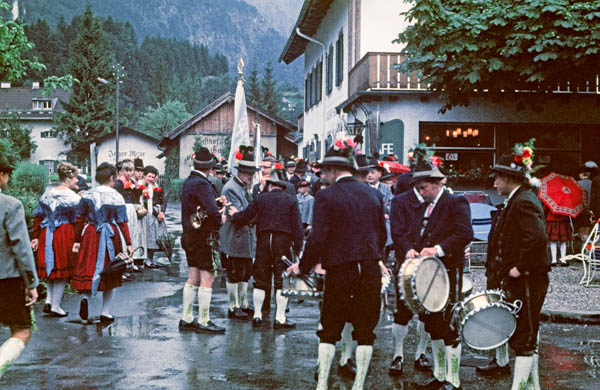 I don't remember what the celebration was all about, but one day the townspeople gathered in traditional festival dress for a parade. As usual it was raining, but that didn't dampen anyone's spirits. 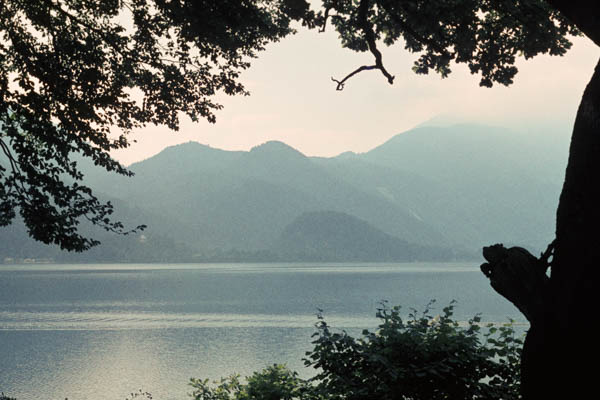 Kochel am See means "Kochel by the Lake." This is the lake. It was large and lovely. There were resort hotels scattered all along the shoreline. 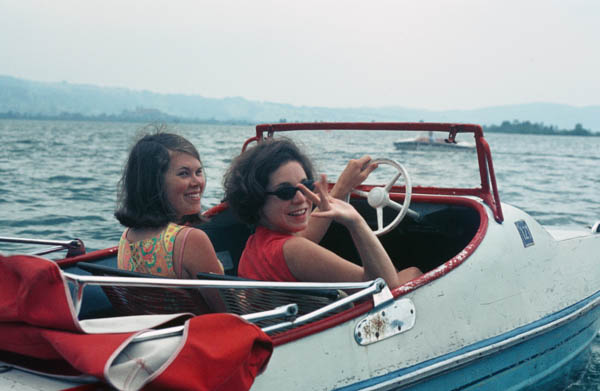 On the occasional nice day there were paddle boats (tretboot) for rent. These were two of my MBC colleagues, Betsy and Kaye.