The only logic behind the divisions of this tour is that there were too many pictures for one page, so I divided them into three sets for downloading ease. 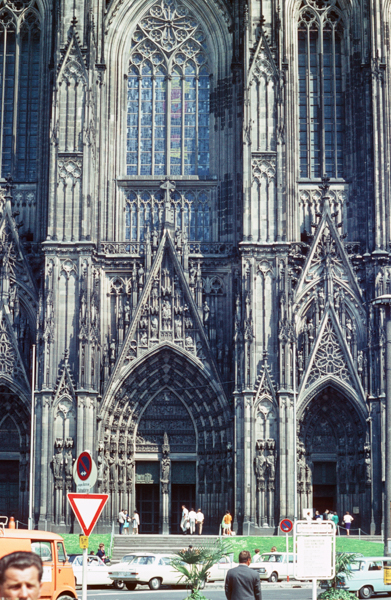 Cathedrals in Germany are located in the centers of the cities and seldom have great vantage points for photographers. This was all I could fit with my basic 55mm lens.

Cologne Cathedral or Kölner Dom, as it is called in German, was started in the 13th century, but not completed until 1880. It was extensively damaged during WWII and rebuilt.

There has been a Christian church at this site since the 4th century.

At present the structure is constantly being maintained and reconstructed. 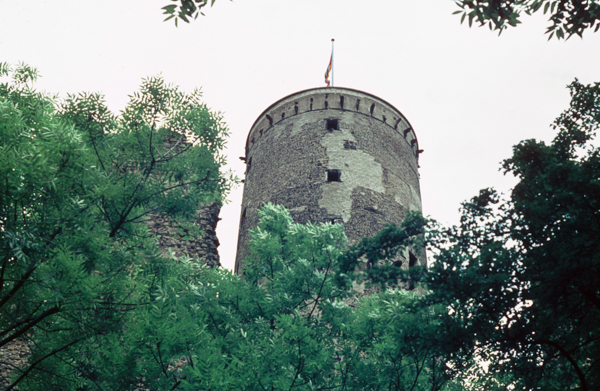 Next stop was Bad Godesberg, the diplomatic quarter of Bonn.

At the time of our visit Bonn was the capital of the Federal Republic of Germany (West Germany). Bad Godesberg was the location of the embassies and related housing.

The ruins of the castle overlook the Rhein River. 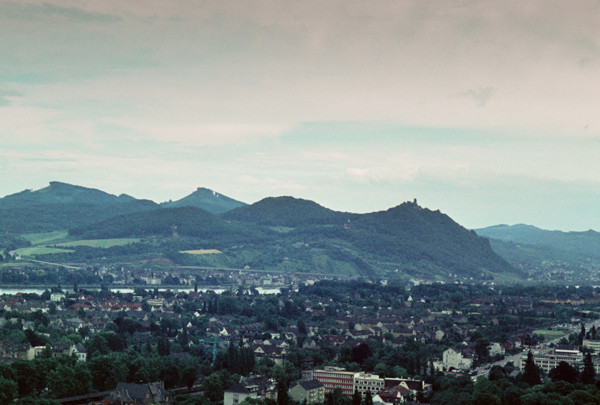 It was a beautiful view over the city.

We were eagerly anticipating a river cruise on the Rhein.

One of the places we visited was the Alexander von Humboldt Foundation. This organization, which is still active, provides scholarships for researchers worldwide to come to Germany and partner with others. They have a primary focus on young post-docs.

These children represented, as I recall, five different countries. 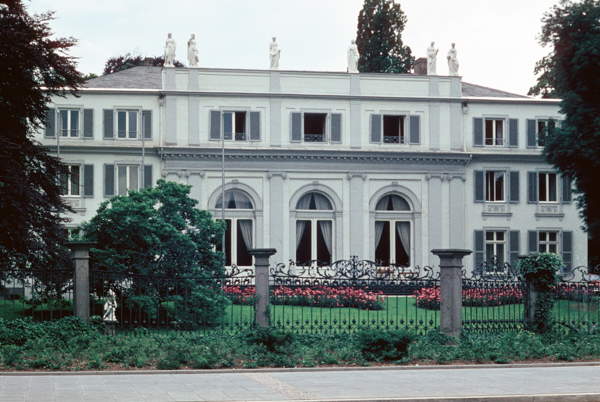 My memory is that this building is somehow associated with Ludwig von Beethoven, who was born in Bonn. I didn't make any specific note on the slide, however, and I can't find out anything about it.

It's not his birthplace, that much is sure. Perhaps a place where he gave concerts before leaving for Vienna?

The abbey at Maria Laach was almost as impressive as the church at Hildesheim.

Construction started in the 11th century, but was interrupted. It was finally consecrated in the 12th century. 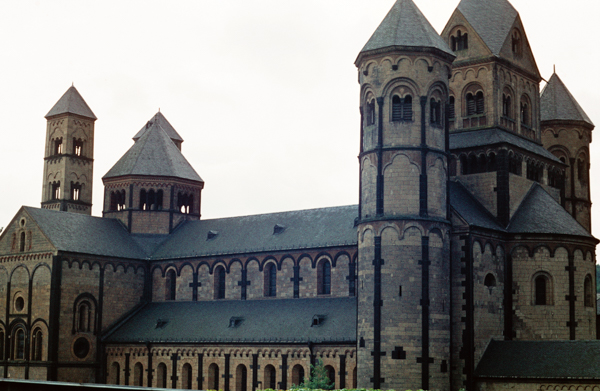 I would love to revisit if only to take pictures with a wide-angle lens. 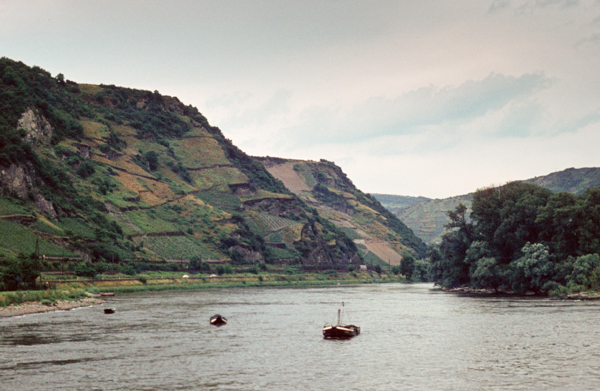 Finally, the long-anticipated Rhein River cruise. I think we boarded at Boppard and I know that our destination was Bingen/Rüdesheim. It was a beautiful voyage and lasted just long enough for Suellen and me to share a bottle of Mosel. 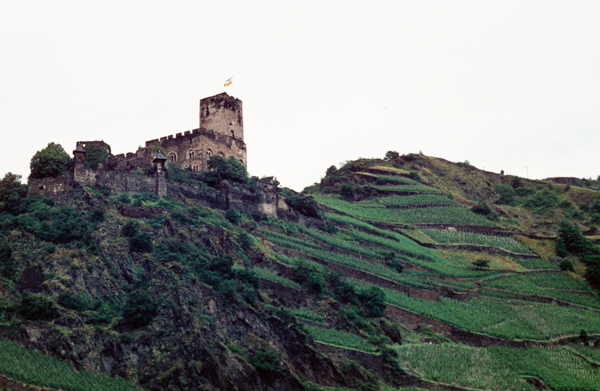 Every conceivable inch of space on the banks of the river was devoted to grapevines. I think the grape tenders must have required rappelling gear to get to some of the areas.

Jim and I returned to this area in 2017. Many of these terraces were fallow because it is no longer economic to farm them.

There were numerous castles. The flag means that the owner is in residence. 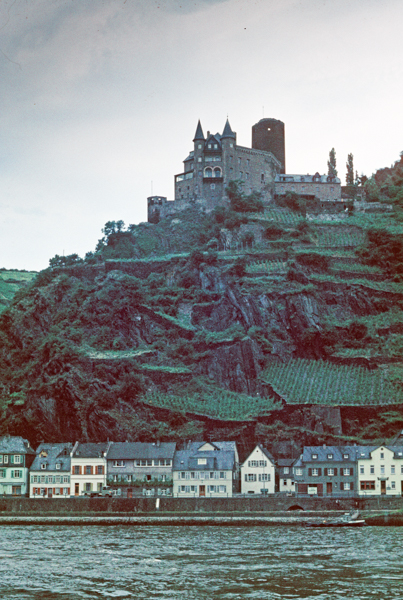 The towns were jammed along the river's edge since there isn't a lot of space in the narrow gorge.

When I started putting together this section I was amused to discover that I still use the German spelling for the river: Rhein. I wondered why spell-check was complaining about it! In over 40 years I've never noticed that the English spelling is Rhine.

The infamous Lorelei. This is the narrowest reach of the river and has thus the fastest current. When submerged rocks are added to the equation there are numerous shipwrecks in the area.

The "legend" of the Lorelei was immortalized in a poem by Heinrich Heine. 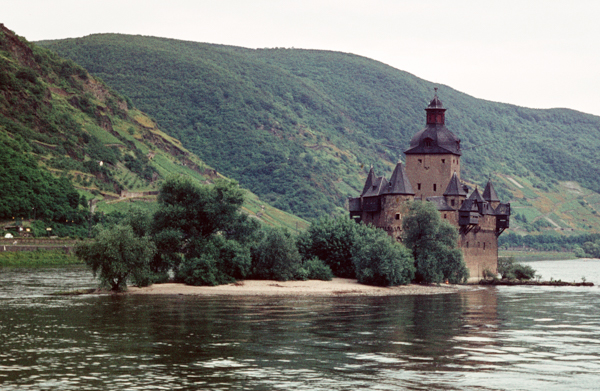 A poster of this island castle was one of the drivers of my interest in Germany. It was built in the 14th century to collect tolls from river traffic and was in operation until the 19th century.

Since our visit it has been "restored" and painted with a hideous "baroque" color scheme. If I had seen it like that back in the day, I may have studied Spanish.

The Mausturm or Mouse Tower is another former toll facility opposite Bingen. An early version was built by the Romans, but it was rebuilt in the 10th century. Destroyed by the French in the 17th century, it was restored in the 19th.

The link shares a great legend about greed getting its comeuppance. 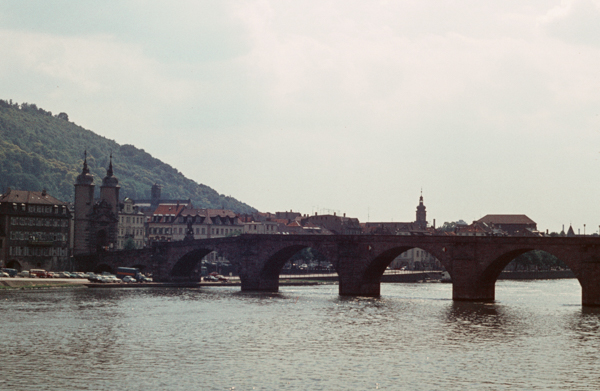 Our next stop was Heidelberg on the Neckar River. The old bridge was built in the 18th century to replace earlier wooden bridges. It was destroyed by the German Army at the end of WWII, but rebuilt shortly thereafter.

The twin towers are remnants of the medieval city gates.

Our bus driver really showed his mettle in Heidelberg! 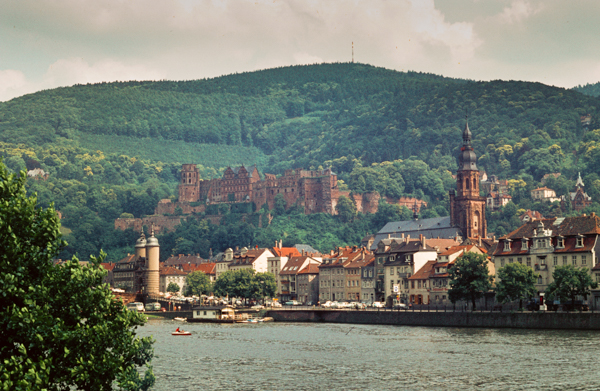 The castle, or more accurately, castles overlooking Heidelberg are the premier symbol of German romanticism.

Heidelberg was the setting for the operetta The Student Prince.

By the end of the 18th century, the complex was in ruins. It has remained that way. 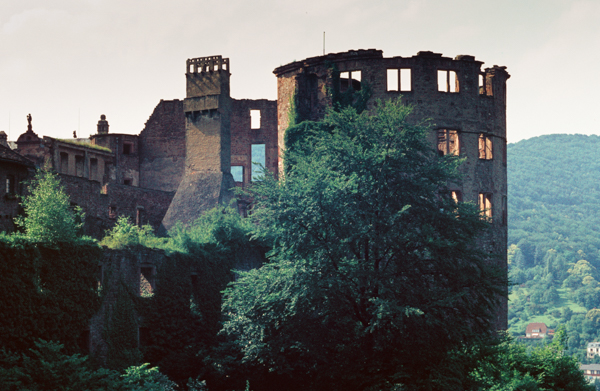 The ruins do have a grandeur about them that is more accessible than if the buildings were intact.