Across Europe in Luxury
Rhine Cruising

As a young student in Germany I took a day trip on the Rhein. I sat with a friend on the upper deck of the tour ship (in the summer sun) and sipped wonderful dry Mosel wine. It was cold and rainy on this day so I sat in the enclosed Palm Court, sipped a wonderful dry Mosel wine and toasted the past. Even in the miserable weather the scenery was beautiful and I occasionally dashed outside to take a picture. 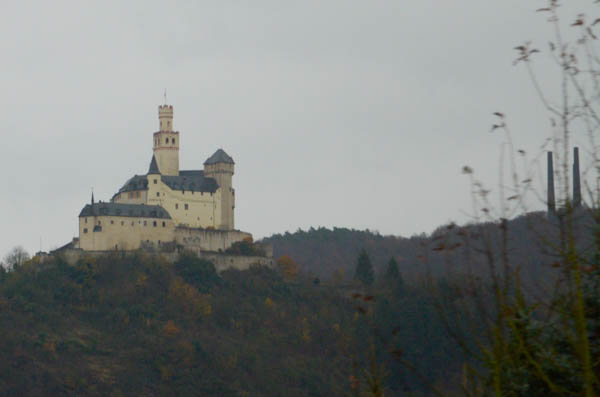 We were told that we could use our "listening devices" to hear particulars about the sights that we passed, but I chose not to do that. Therefore I have no idea what most of the towns & castles were. 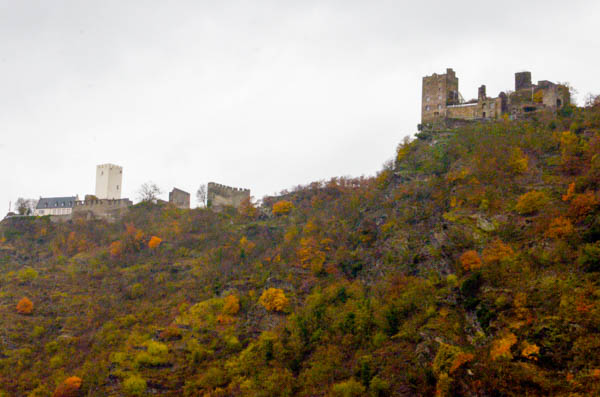 I did somehow hear a story behind these two castles. There were two brothers who were estranged. They had adjoining properties, but built a wall between them. Eventually they decided to reconcile and made a date to go hunting together. The pre-arranged signal was for whichever brother got ready first to shoot an arrow over the wall toward the other castle. Of course, in the way of such legends, the arrow hit and killed the other brother.

Regardless of the truth of the legend in its various forms, the castle on the left is Burg Sterrenberg and the castle on the right is Burg Liebenstein. The wall between them is known as the Streitmauer. The best translation would be "spite fence." The castles are now hotels. 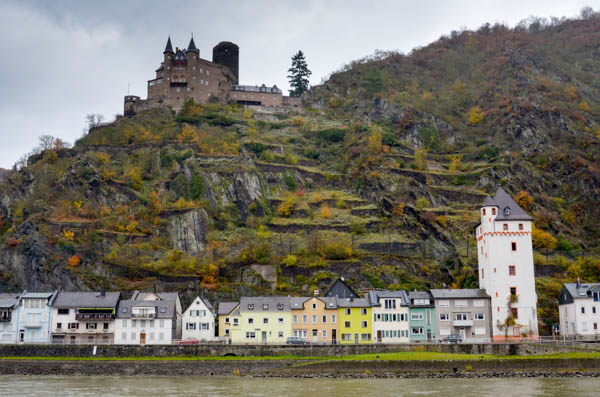 When I took this cruise in my school days, every conceivable inch was cultivated and planted with grape vines. Fifty years later many of the terraces were fallow. I have this exact same picture from 1968 and every one of these terraces is planted with vines!

I asked the reason why and was told that this bank of the river was found to be relatively unproductive so it had fallen into disuse for grapes. 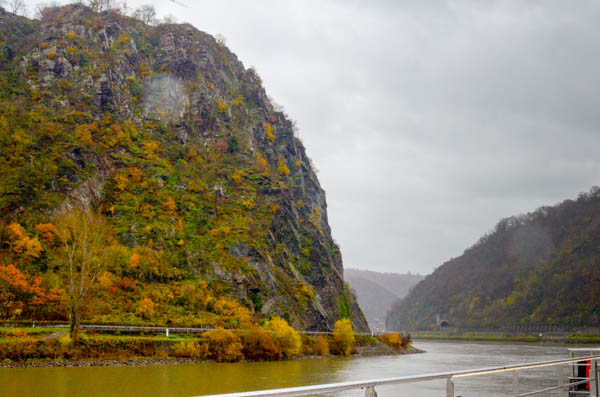 Jim wondered what the big deal was about the Lorelei Rock since it isn't especially scenic. It is, however, the narrowest segment of the river and has historically been the most dangerous. This is the reason for the legend (as I first heard it) that sailors are lured to their deaths by the songs of the beautiful Lorelei as Greek sailors would succumb to the Sirens. 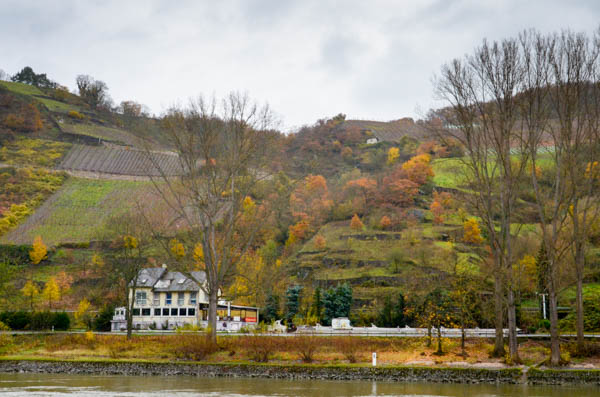 These intensive plantings are more like what I remember from years ago although even here some of the terraces are fallow. 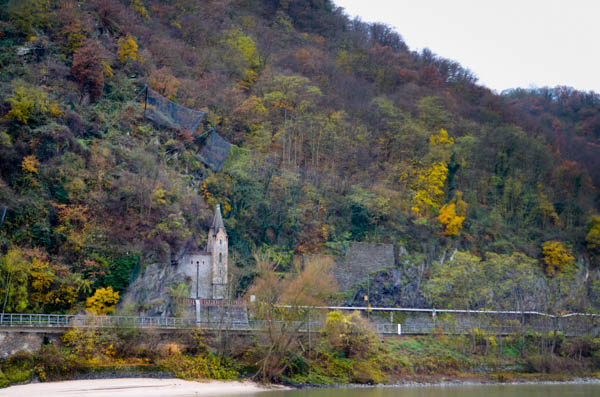 Numerous rail tunnels had chapel- or castle-like structures at their entrances. This was an attempt to disguise the strategically important tunnels so that they would not be bombed during WWII. 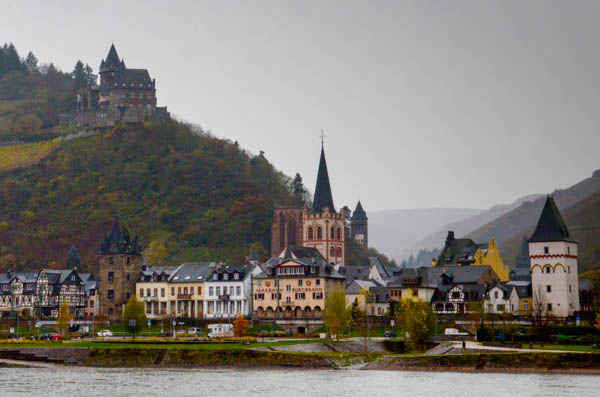 I was able to capture the name of this village: Oberwesel. Some towns and villages displayed their names on the riverbank. 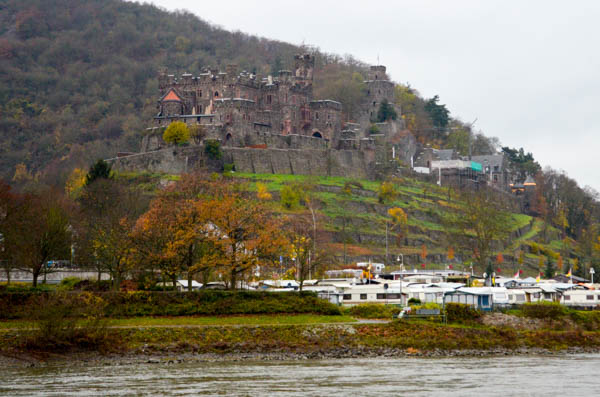 Even in chilly November this caravan park was full. I wonder if these are permanent residences masquerading as travel trailers. This is common in the US. None are hooked up to a vehicle. 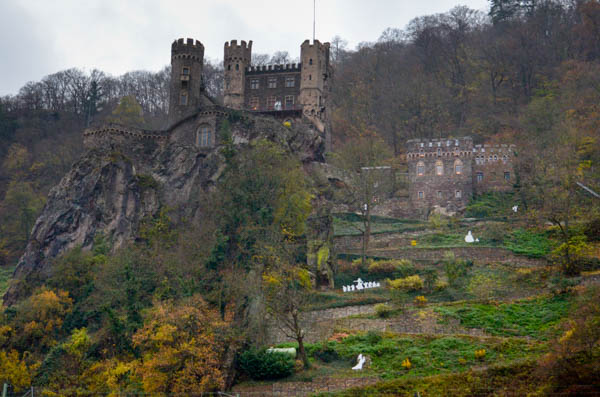 The cut-out silhouettes decorating the gardens of this castle represent Snow White and the Seven Dwarfs -- Disney fashion. The castle is the Burg Rheinstein. The cut-outs must have been part of a special event held there.

There were two places I really wanted to see on this portion of the trip. One was the Mauseturm. I sat and scanned the scenery for quite a while, but I missed it. The other was Pfalzgrafenstein. I missed it too. A poster of that little toll booth inspired me to study German.

During the evening we left the Rhein and headed up the Main (pronounced "mine") River. I was also hoping to see the lights of Frankfurt where I had made many business trips, but I didn't stay awake late enough and so missed those too!