I had looked forward to the opportunity to trace part of Shackleton's hike across the mountains to the whaling station at Stromness. One of our expedition leaders, Trevor Potts, had recreated Sir Ernest Shackleton's epic journey from Elephant Island off the coast of Antarctica to Stromness and was to lead the hike. Unfortunately, as mentioned earlier, I was using borrowed boots for the "wet" landings and the boots didn't fit well enough for hiking. That difficulty could have been overcome, but I was also suffering from a cold and major sore throat. The two problems together convinced me that it would be neither wise nor respectful of the other hikers to make the attempt.

As we watched the intrepid few depart in their Zodiacs before breakfast, that decision seemed even better! 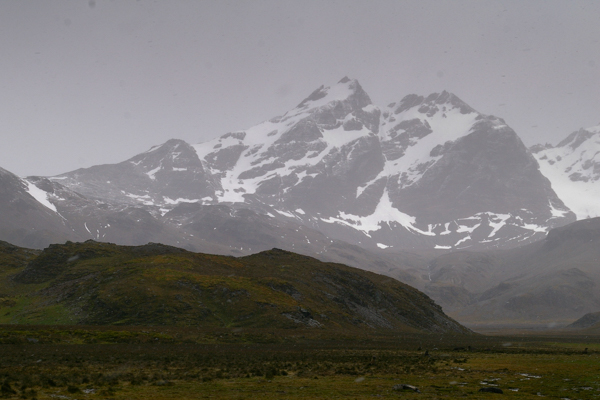 The hikers came onto this plain following Shackleton's route from Fortuna Bay over the low hills to the right of the picture. This flat plain was the home of a number of reindeer, which had been introduced to South Georgia by Norwegians during the whaling days. The reindeer prospered to the point of damaging native vegetation and disrupting nesting birds. Since our visit the government has eradicated them. 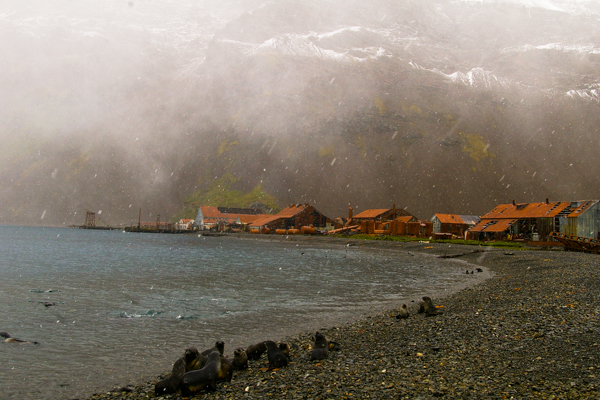 At the time that Shackleton came to Stromness (1916), it was a busy whaling station. Since 1961 its only visitors have been seals, penguins, reindeer and the occasional tourist.

The snow and fog are a reminder that even though we are visiting in the tail-end of summer, we are in a sub-Antarctic location with winter approaching.

One sad sight was a male seal with a wounded flipper that prevented him from moving or swimming. He  appeared to be slowly dying of starvation. I asked our guides if anything could be done, but they are prevented by the Antarctic Treaty from interfering with the wildlife – even for humane purposes. 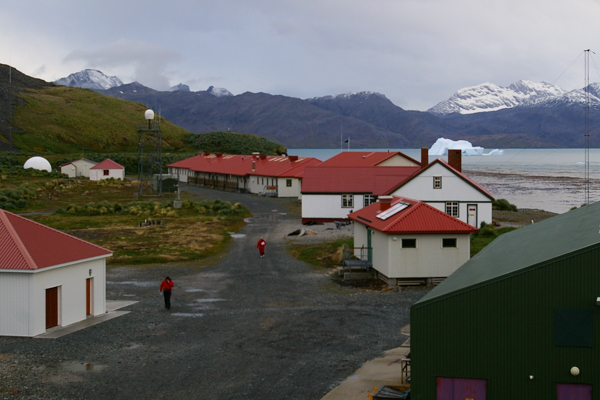 After leaving Stromness we cruised to King Edward Point where we docked overnight. This is one of the two locations staffed year-round. The other is a research station on Bird Island. The Post Office was a popular place as travelers purchased post cards to send back home.

Our postman collects stamps so we always post a card to ourselves to pass on to him.

We walked from the dock at King Edward Point to the South Georgia Museum at Grytviken. It felt good to stretch our legs after several days at sea where the only real exercise was walking around the pitching deck (10 trips around the promenade deck equaled a mile) in the wind and sea spray. Many passengers, including myself, put in those daily laps, but solid ground can't be beat!

Along the road we saw the only Chinstrap Penguin of the trip. He (or she) was sitting alone looking miserable surrounded by shed feathers. 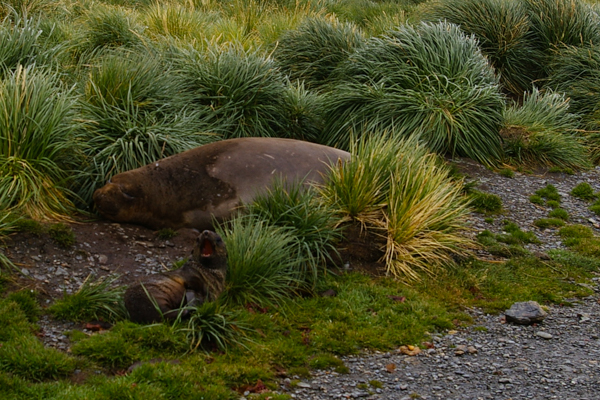 Also along the road was this sleeping female Southern Elephant Seal accompanied by a rather irritated female fur seal. The Elephant Seal is a true seal without ear tufts and the ability to "walk" on its flippers enjoyed by the fur seal. 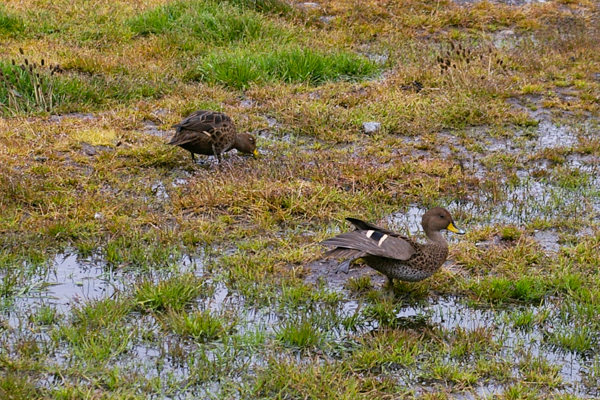 Another creature met on the way to the museum is the South Georgia Pintail. It is a subspecies of a common southern hemisphere duck: the Yellow-billed Pintail. The population on South Georgia is recovering from over-hunting during whaling days. It does not seem to suffer from rat predation. 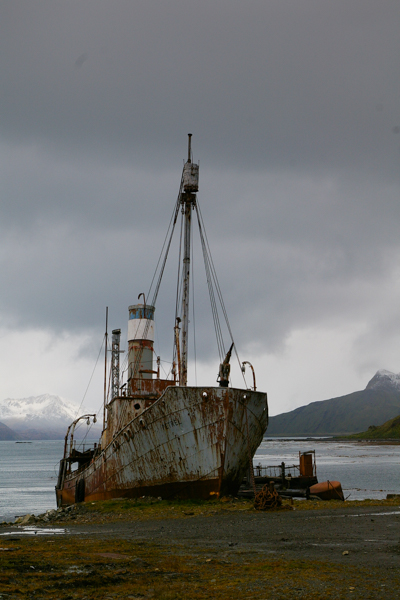 The whale-catcher Petrel is one of the many exhibits at the museum. It was built in 1928 and converted from whaling to sealing in 1956. Whaling was discontinued in this location in the 1960s when decreased numbers of whales made it uneconomic to hunt them. 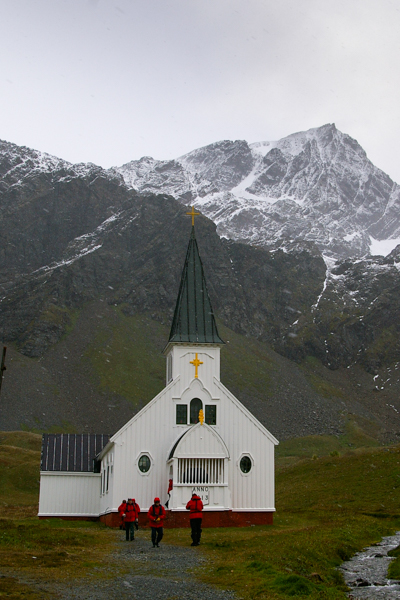 The church in Grytviken is nowadays used primarily for weddings. This could be the ultimate destination wedding! 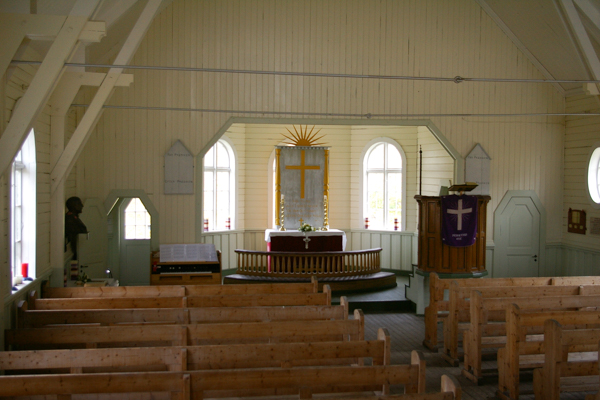 It was one of the better preserved buildings. 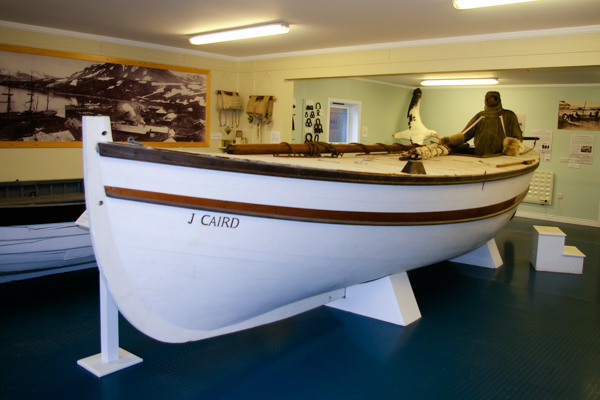 When Sir Ernest left the bulk of his men on Elephant Island, he and his five comrades sailed away in a tiny open boat. Its size is indicated by the life size figure in this full-scale replica. The six men traveled for 15 days and covered roughly 800 miles before landing on the south shore of South Georgia. Rather than make the risky attempt to sail around the island, three of the men crossed the mountainous island on foot to Stromness, as noted above.

Trevor Potts and others recreated the feat in a replica of the James Caird in 1994 (sailing from Elephant Island to South Georgia) and 2001 (crossing South Georgia on foot). 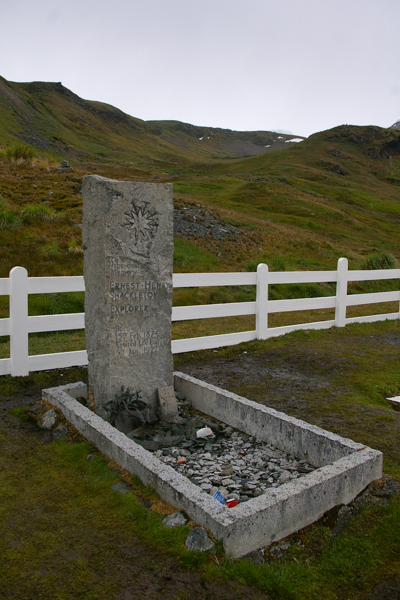 Sir Ernest was planning another Antarctic expedition in the early 1920s when he died of a heart attack. His wife directed that he be buried here in Grytviken.

Many of our ship's passengers came over early in the morning on Zodiacs along with Trevor Potts to offer the customary toast in Shackleton's memory. Not being an early riser, I didn't make it until the afternoon and, alas, had no suitable libation. The captain of our ship was also making a personal pilgrimage to the grave at about the same time.

The cemetery was surrounded by cranky fur seals. I was rather nervous at walking through them alone because their bite is said to be quite dangerous, but we were given strict instructions not to run and to make use of hiking sticks to fend off any threats. I had to stare down a couple, but I made it in and out OK.

The British administration patrols the local waters. There are a number of visitors that come to the island -- either in organized cruises like ours or in their own private yachts.

Click your browser's "back" button to return to the index page or click to continue our tour of South Georgia.