I remember the day we bought Chip. I was about six. My mother and I went to the breeder's farm to meet his collection of squirming Cocker Spaniel puppies. My mother had in mind one of the active and playful females, but I had eyes only for this little blond guy who sat at my feet and gazed at me. He grew into a handsome dog and lived a life of adventure. In those days no one had ever heard of castrating a male dog (at least not in Vicksburg, MS), so he remained intact throughout his life. No one ever heard of confining dogs either, so he roamed a good bit. It was a miracle that his life was long in spite these things.

Once he disappeared for several days and came home with a fractured skull. We figured he must have been hit by a car, or maybe someone struck him. Later in life he developed a slipped disk and suffered a while from that until it eventually fused. He was stolen twice – once by a family that lived close enough that we could hear and recognize his bark. My brother retrieved him on that occasion.

I don't think Chip ever learned a trick or anything approximating obedience, but he was such a good-natured dog that it didn't matter – except when it came to other male dogs. He and Teddy Bear, the Chow across the street were sworn enemies. It didn't matter that Teddy Bear was twice his size and more than twice his weight. At every opportunity they were at each other's throat and it's a wonder that neither one was seriously injured. Unlike myself who got in the middle of one of those fights and ended up with a bitten leg, a frantic trip to the emergency room, and an abiding fear of Teddy Bear (although there was no way to determine which dog actually did the deed).

Chip had reached an advanced age by the time I left for college and had slowed down both mentally and physically. When I came home for freshman Christmas break and greeted him, he backed off with a growl (Chip was never free with his affections) and stalked away to the kitchen. Imagine my dismay! Within a minute or two though, I heard a yip, and he charged back and flew at me with wet doggy kisses. It just took him a bit to recall who I was.

That same Christmas break, he disappeared for the last time. I spent New Year's Eve at a friend's house and my parents went to our fishing camp for the night. For some reason they decided not to take him and left him out overnight. We never saw him again.

Chip looks like a half-grown puppy in this picture. It was taken in the back yard of our house. I think my mother loved those cast-iron garden chairs almost as much as the family (I've still got the pair of them). It was quite an honor for Chip to have his picture taken sitting on one, but he doesn't appear to appreciate it. 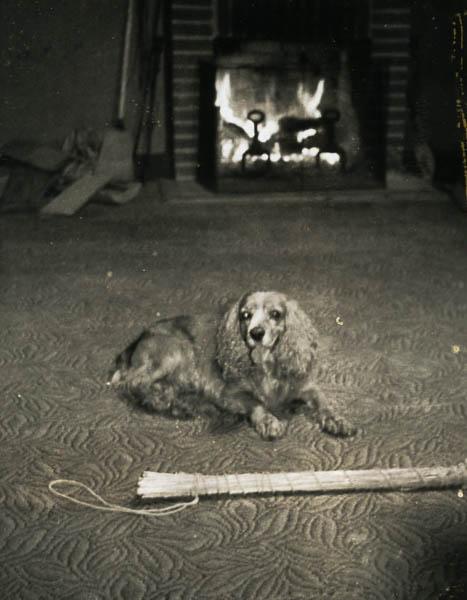 This was much more his bailiwick!

We had a fishing camp at Long Lake: an old street car up on stilts higher than (most of) the floods. There was a small porch on the lake side and this large room built onto the other side.

We went to the lake almost every weekend. My father said it added ten years to his life because no one could reach us short of driving several miles out of town, most of it on a gravel road, climbing a gate, and then walking another mile down a dirt road to the camp. His clients didn't think twice about calling him at home on non-working hours, but only once did anyone take the trouble to reach us at the lake – the day my grandmother died.

The original of this picture was a very early Polaroid!