Ever since I can remember I wanted a horse. My parents finally realized that if I didn't learn to ride, I'd probably be killed, so they arranged for me to have riding lessons. It was catch as catch can for a number of years, but when I was about 14 my uncle, Win Cutrer, gave me my first horse. This would have been in 1961. I have no idea how old Becky was when I got her, but the vet said she was at least 20, probably older. She was a tough old girl, though, and even at her age and with high ringbone in one hind pastern she was still the fastest horse at James H. Meade's barn where we boarded her and I took lessons. She carried me on many lessons and trail rides and endured a number of 4-H shows and parades.

After a couple of years, Becky was "sadly outgrown" as the saying goes. She went back to live with my uncle and my folks bought Blue from Mr. Meade. I'm embarrassed to admit that I don't remember exactly when Becky died, but I know it was before I graduated from college. She lived a happy life in retirement at my uncle's dairy farm.

I don't have many pictures of Becky because my folks were more into taking Super-8 home movies. Here are the few that I have found.

The Christmas after I first got Becky, my folks gave me the accoutrements for a horse: most specifically a saddle, but also the stylish, for the day, red coat and other goodies. 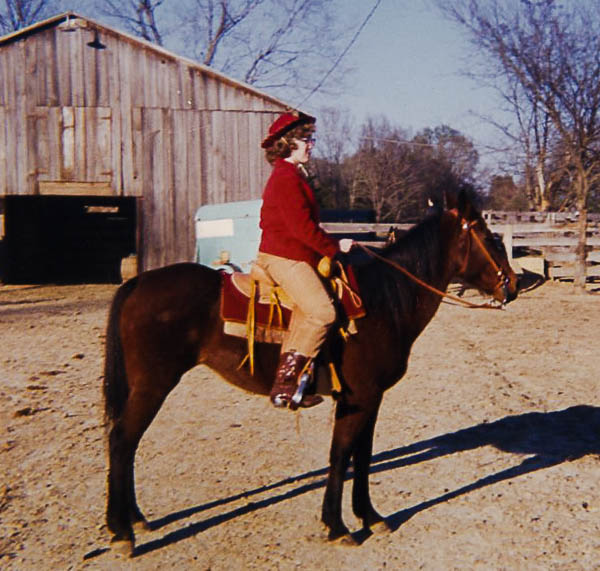 This picture was probably taken that same Christmas day. Certainly everything looks new.

The land where Mr. Meade's place was located is subdivisions now. (It's not only major metropolitan areas that sprawl.) When the barn was torn down, Evelyn Halper Rule, our trainer and instructor, managed to salvage some of the planks, which she treasured for the rest of her too-short life.

Uncle Win said that Becky was a pure-blooded Quarter Horse and had been on the track. Maybe. She came without papers of any kind, but she was indeed speedy and loved to run. Once she got going, she was hard to stop. 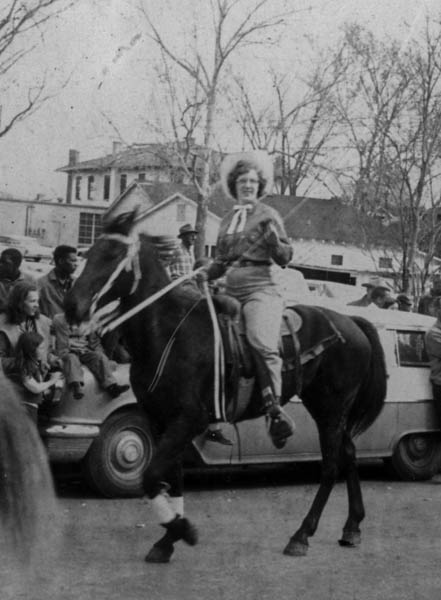 The Vicksburg Riding Club participated every year in the Vicksburg Christmas Parade. Mr. Meade was one of the founders of the club. The uniform shirts were green with white bow ties and white lettering on the back. We all used white headstalls and reins with white wrappings on the forelegs. We thought we were pretty snazzy.

The parades were in early December, but most years the weather was mild enough that coats weren't needed. I remember one year the parade started in 80° weather, but a cold front came roaring in with pouring rain. The temperature dropped about 30° in half an hour. We were concerned about the possibility of a tornado, but the parade went on!

Later, after I had bought Blue, the club was invited to participate in the Louisiana State Livestock Show, parade, and rodeo. The club collected enough trailers for the horses, and we all loaded up to head to Baton Rouge. It was pretty exciting -- especially the rodeo grand entry. Click for a video that shows what it felt like!