As we prepare to downsize yet again, some items with a story to tell and memories to share may not make the cut. The web site's zeroes and ones don't take up floor or cabinet space, so I have preserved them here. 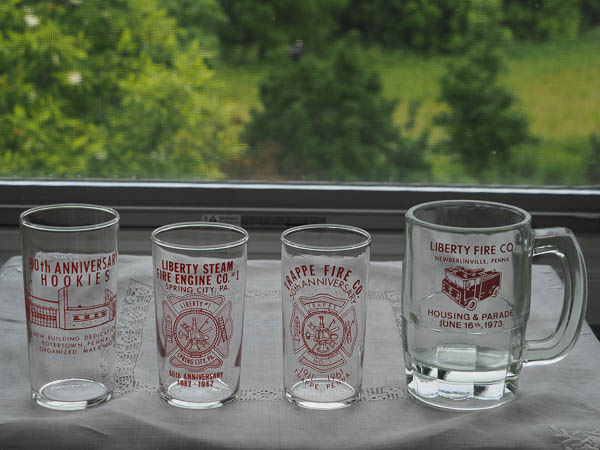 When Jim was a junior fireman back home in Pottstown, PA, he was a junior firemen with the local volunteer company, nicknamed The Phillies. Whenever a fire company in a nearby community purchased a new fire engine, all the local companies brought their equipment to the associated parade and "housing" ceremony.

A souvenir glass gave the possessor free refills of beer. Given the dates on these glasses, Jim would have been barely over the legal age, if that, but he said that no one checked IDs.

The "housing" was done by assembling a cadre of people to push the new engine, by brute force, into its new home at the fire station.

Many years later when we attended Jim's 55th high school reunion, we stayed in Boyertown and walked by the "Hookies" fire station celebrated in the left-most glass. 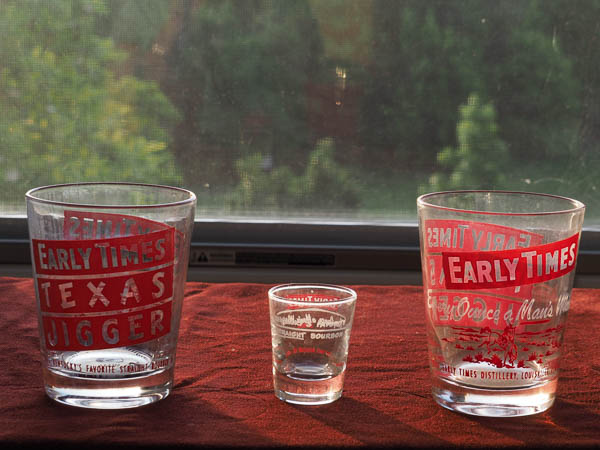 In her youth, Mary Ellena was not a fireman, but her family spent weekends at a fishing camp on Long Lake, an oxbow lake north of Vicksburg, Mississippi. Her parents favored Early Times bourbon whiskey. The double Old Fashioned "Texas Jigger" glasses date from that time and were a fixture at the camp.

A number of years later, we attended a fund-raising auction for Arena Stage in Washington, DC. Among the miscellaneous donations was a partial case of honest-to-goodness jiggers. Who could resist? We bid on and purchased the collection, gave several to the Wards, and now have a lifetime supply of jiggers. 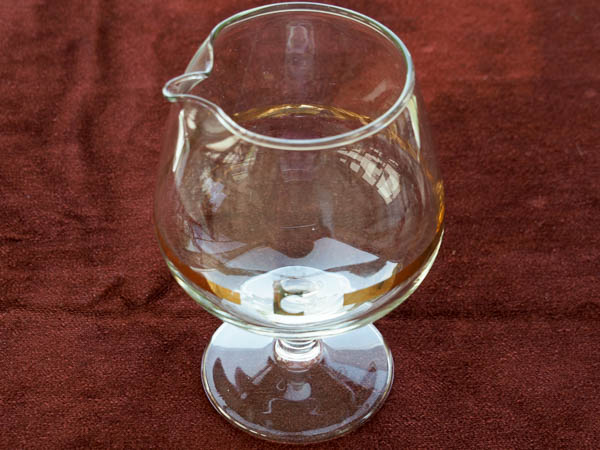 This glass is from the Queen Elizabeth Hotel in Montreal. I traveled to Montreal with my parents for an American Bar Association meeting in 1975. We met my mother's brother, Lewis Cutrer, and his wife Cathrine for a buffet luncheon at the "Queen E." The restaurant, not realizing the stamina of my mother and Uncle Lewis, had whole lobsters on the buffer. I don't remember how many they ate between them, but it was more than one apiece. The restaurant didn't make a profit on their meals.

The glass held martinis, my parents' favorite noontime quaff. I don't drink martinis, but I stole the glass to mark the occasion (after checking with the waiter).

Over the years over-zealous cleaning has almost obliterated the crowned "E" that was the logo of the hotel at the time. 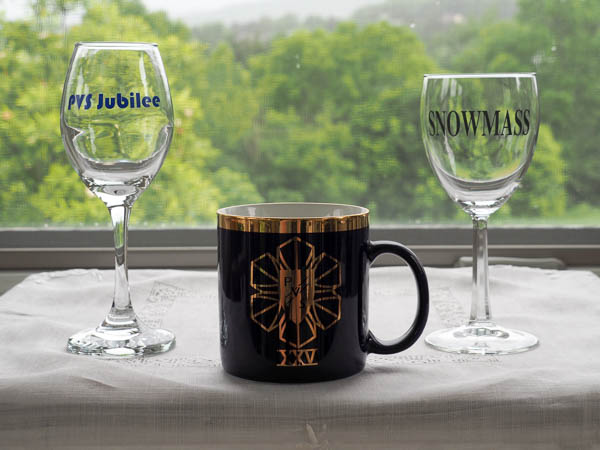 When we got married, our honeymoon was a ski trip with our ski club, Potomac Valley Skiers. At the time we joined, the club had recently had its 10th anniversary.

The mug is from the 25th anniversary party, November, 1995, at the Ft. McNair officers club in Maryland. That celebration was not as exciting as the 30th anniversary at Bolling AFB, where excess smoke in the kitchen caused an evacuation for a short time until the fire department gave the all-clear. Smart skiers took their drinks with them into the chilly parking lot.

The PVS Jubilee glass is a memento from the 50th anniversary party, November, 2015, at the Top of the Town in Arlington.

Many of our anniversaries have been celebrated on ski trips, and our 45th in 2022 was no exception. Our skiing buddies gave us a pair of Snowmass, Colorado, wine glasses, along with bubbly to mark the occasion. They also gave us a "sapphire" ornament that will travel with us wherever we go, so it doesn't need a space here. 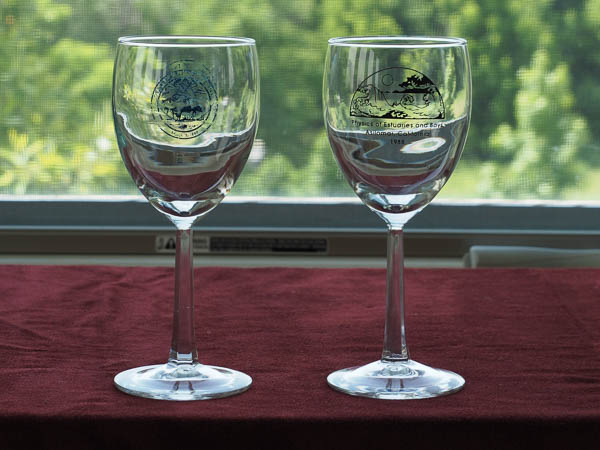 These two glasses are reminders of times with the U.S. Geological Survey (USGS) where Jim worked in the Water Resources Division for over 40 years. The one on the left features the USGS logo on one side and the Department of Interior logo on the other. These were a special product devised by colleague Dave Dawdy.

Mary Ellena also worked at USGS for about four years. Long enough to meet and marry Jim and become acquainted for the Honeywell Multics System. Once these two things were accomplished, she went to work for Honeywell.

The glass on the right is from the Asilomar Conference Center. Jim attended the 1989 conference on the Physics of Estuaries & Bays and brought home this glass. All the rest of the time we lived in California we talked about spending a long weekend at Asilomar, but never did.

After working for Honeywell for four years, Mary Ellena moved on to Tandem Computers (and its successors) for the next twenty or so years until she retired.

The double-handed beer mug in the center dates from a 1982 ITUG meeting in Washington, DC. Tandem, which used duplicate components for fail-safe, non-stop operation, favored two-handled beverage containers at the time.

The tall glass on the left is labeled Customer Support Organization (CSO), but I don't recall the particular occasion.

The snifter on the right is from the CSO Christmas party in 1986. Unlike the development and engineering organizations, CSO was taxable "overhead" so we never had the lavish holiday blowouts enjoyed the R&D organizations. Our parties were at low-budget venues. This glass was as good as it got.

The small Taster's Choice glass celebrates a 2019 fund-raiser for Yellow Brick Road, a local early-learning center. The event was a Kentucky Derby party and silent auction.

The other two glasses were from another Kentucky Derby party held at the CreRun Farm of Alan Kirshner and Deborah Mihaloff-Kirshner to benefit the Virginia Arabian Horse Association. We enjoyed mint juleps from these vintage derby glasses from the Kirschner's collection.

For many years we only watched TV three times a year: the Kentucky Derby, the Preakness, and the Belmont. The TV would be in storage otherwise. One year when we hauled it out of the closet and turned it on, PFFT, smoke came out the back. Dead TV.

We made a quick run to the local electronics store and came home with our first color TV. Just to watch the Triple Crown. 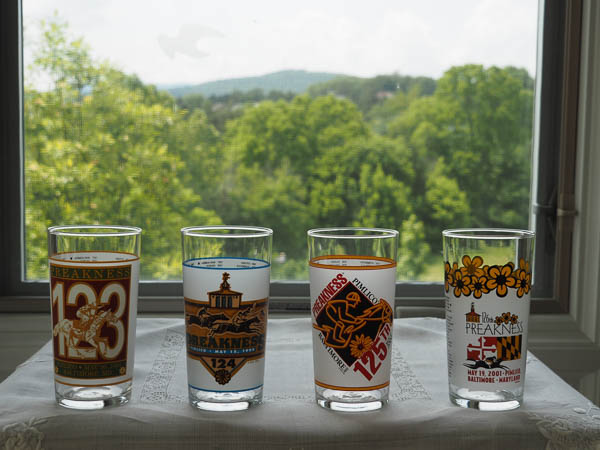 We never made it to Louisville for the Kentucky Derby, but for many years we made the trip to Baltimore for the Preakness. These glasses, which once contained Black-eyed Susan cocktails, commemorate those excursions. After collecting this set, I decided to get my highballs in disposable glasses. (I can make a decent mint julep, but I've never felt the need to make a Black-eyed Susan for home consumption.)

One year we almost melted in the heat. One year we froze. One year a nutjob ran onto the track and started swinging at the horses coming down the home stretch. Every year we had the same seats and got to know the folks sitting around us. It was fun.

The city ran a shuttle bus from the nearest MTA station to the track. After getting off the bus we had to walk a couple of blocks to the entrance. Local families set up a variety of concession stands at the houses along the way and we never failed to buy chicken, BBQ, greens, corn or other soul food delicacies rather than pay the exorbitant prices at the track itself for generic hamburgers and soggy fries. 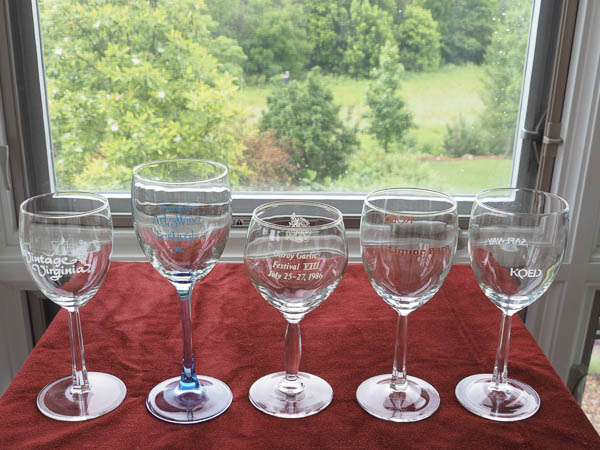 Over they years we've enjoyed visiting various wine-tasting events sponsored by various organizations. From the left:

Vintage Virginia was held at Great Meadow Event Center when we first went many years ago. It's still being held, but at a different location. My fondest (?) memory was of some guys who thought much of themselves. They were loud, tipsy, and smoking cigars! As if they, or anyone near them, could taste wine after that.

The Mountain View Art and Wine Festival is likewise still being held. Alas, the Gilroy Garlic Festival, which we attended in 1986, has been cancelled for the foreseeable future. In case you're curious, garlic wine is NOT drinkable.

KQED also once held a massive wine and food festival in San Francisco. It was originally in conjunction with Safeway and later with Liquor Barn. We got glasses from the two times we attended. We would take the train from Mountain View to the city and meet friends there. 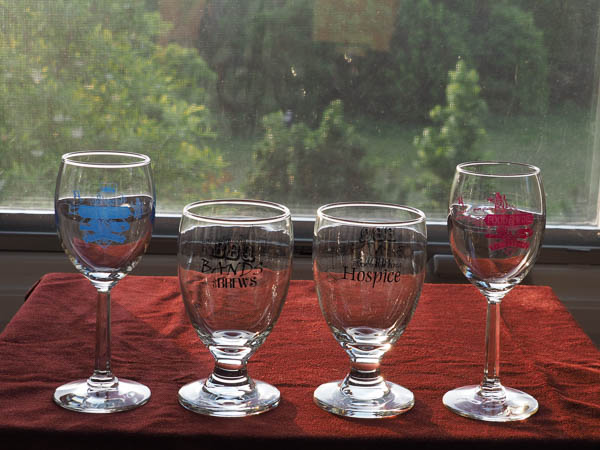 The Rockbridge Area Hospice had a BBQ, Bands & Brews festival at Glen Maury Park in Buena Vista. The center two glasses came from there. I don't think it was held more than one year.

The Lexington-Rockbridge Chamber of Commerce held a Food & Wine Festival for several years at Lime Kiln Theater. We went a few years and have the glasses to prove it. It appears to have been succeeded by a Beer & Wine Festival, which we have not attended. Who needs food anyway?

In addition to festivals we have visited too many wineries to count. We only scored glasses at these four. From left to right:

Prince Michel Vineyard & Winery is one of the oldest Virginia wineries. It is on US29 between Northern Virginia and Lexington. We drive past it frequently, but only stopped once for a tasting.

Yarden Winery, on the other hand, is perhaps THE oldest winery on the Golan Heights of Israel/Syria. The wines are kosher and delicious but hard to find stateside.

Many years ago we spent a leisurely vacation week traveling outbound more-or-less along the C&O Canal to Cumberland, MD, and back along the National Road (US40) to our home. It was on that trip that we discovered Byrd Vineyards. It made good wine in its day, but the owners fell victim to over-expansion. The title of the article at the link says it succinctly: "A Revelation! A Tragedy!"

Barboursville Vineyards produces some of our go-to wines. When I made panels of corks a few years back to decorate the support column in the basement, I made an entire panel of Barboursville corks. As far as "one of the oldest Virginia wineries" goes, it is a good bit older than Prince Michel. Better wines too.