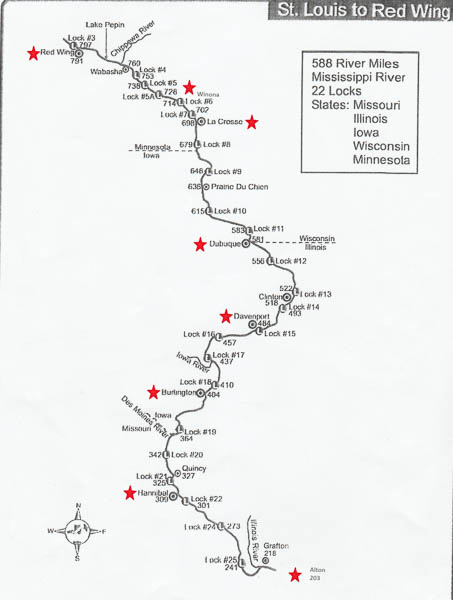 The map gives an overview of (most of) the Upper Mississippi River with our stops marked with red stars. Cairo, IL, (not shown) would be at mile marker 0 on this map. We traveled an average of 84 river miles and traversed an average of 3 locks each 24 hours -- mostly at night.

The following description is adapted from the "About the Upper Mississippi River" page on the Wisconsin Natural Resources site.

Before river modifications began, the Upper Mississippi River was a mosaic of braided channels and sandbars, making navigation in larger boats difficult. Water levels were unpredictable and the river was as vulnerable to drought as it was to floods. Sometimes it was possible to wade or drive wagons across the river.

The transformation of the river into a reliable navigation highway began in 1866 with the 4-foot navigation channel project which authorized dredging, snagging, clearing overhanging trees and removing sunken vessels. To accommodate steamboats and other riverboats, a 4½- foot channel project was authorized in 1878, followed by a 6-foot project in 1907. By the turn of the century, the free-flowing river had been channelized by the use of wing dams and closing dams. By 1930, the river's wide shallows, braided channels, and sandbars were largely eliminated.

The channel improvement projects culminated in the building of locks and dams in the 1930s to maintain a 9-foot deep channel. The navigation dams created a stairway of reservoirs or navigation pools from Minneapolis, Minnesota, to St. Louis, Missouri. Currently, this system includes 29 locks and dams on the Mississippi River and eight on the Illinois River. 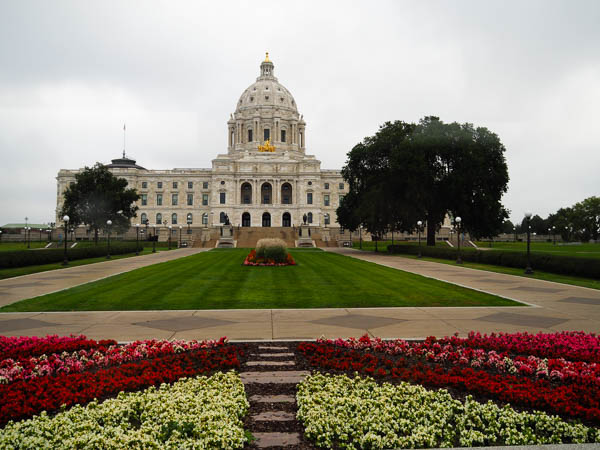 Our local guide, Peter Sussman, told us a (shaggy-dog?) story of the early days of Minnesota statehood. The three longest-established cities got together to divvy up state services. Stillwater, the oldest, figured that crime was a constant, so they chose the state prison as a good bet for the future. St. Paul, the next in line, opted for state government, so it elected to become capital. Minneapolis, the new kid on the block, got the university.

As we started our tour of the Twin Cities of Minneapolis and St. Paul, we drove by the state capitol. Later in the trip our Road Scholar expert, Jason Scappaticci, gave a presentation on the architect, Cass Gilbert, who designed this building among many others including the Woolworth tower in NYC and the US Supreme Court. 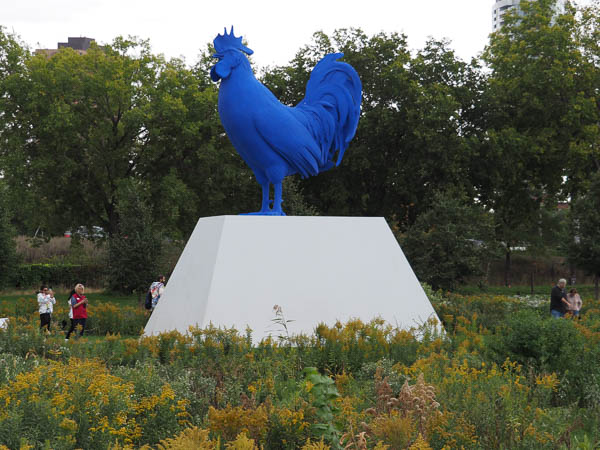 After spending the morning touring St. Paul, we crossed the Mississippi to visit the Guthrie Theater and the Minneapolis Sculpture Garden. Monumental sculptures were scattered around a space landscaped with native prairie grasses and flowers. This is Katharina Fritsch's 2013 sculpture "Hahn" (Cock). 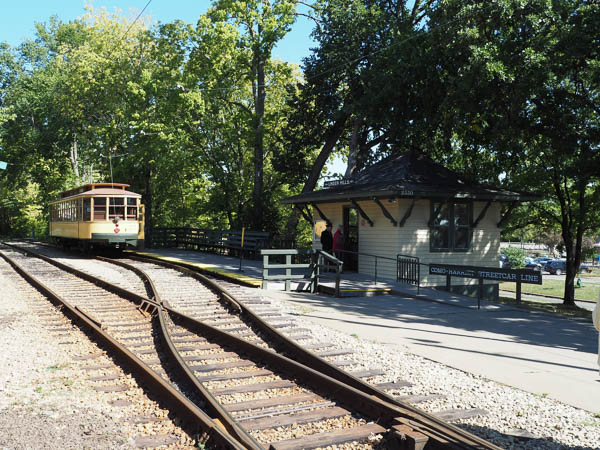 The next day began at the Minnesota Streetcar Museum. We made several trips up & down the short segment of restored tracks between Lakes Harriet and Bde Maka Ska, pronounced Be-DAY Mah-KAH-Ska. The latter lake had been called Lake Calhoun for years, but in 2018 its name was changed back to its Dakota name. More information about the naming controversy is available at the Bde Maka Ska link.

In addition to riding the rails we visited the "car barn" maintenance shop. I had not known that the term car barn dates from the days when streetcars were pulled by horses. Each horse (or team of horses) could only make one or two runs a day, so relays of horses were kept in the barns when off duty. 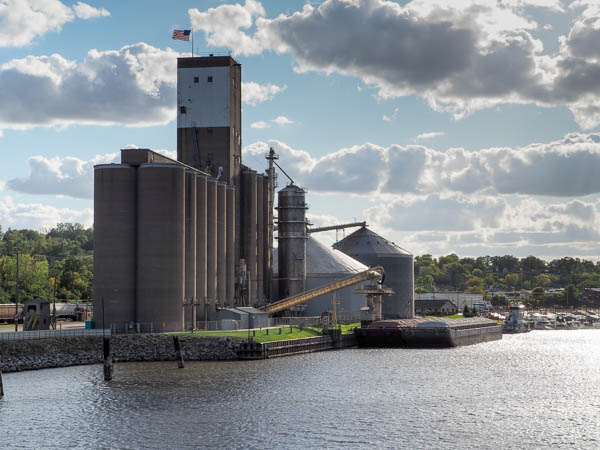 After the streetcar museum we traveled to Red Wing, MN, to meet the American Duchess. In addition to being the cruise terminal, Red Wing is a major port for shipping grain down the river. I was sorry that we didn't have time to wander around town a bit because it looked interesting.

As soon as our luggage was on board and we were checked in, we were off.

The town of Winona, MN, is said to be named after the Indian maiden Wenonah, who may have been the daughter of either Chief Red Wing, for whom Red Wing, MN, is named, or Chief Wabasha, who lived in the neighborhood of the modern city. This statue of Wenonah, located in a local park, faces west. The maiden is gazing after her people who were banished to reservations.

Another version of the story incorporates the legend of a maiden leaping from a high point to her death.

"Winona" signifies a first-born daughter in the Dakota language and is not a personal name.

The house in the background was built in 1857 by early entrepreneur Henry Huff, who ran a ferry across the river and owned a hotel & other businesses catering to new arrivals. 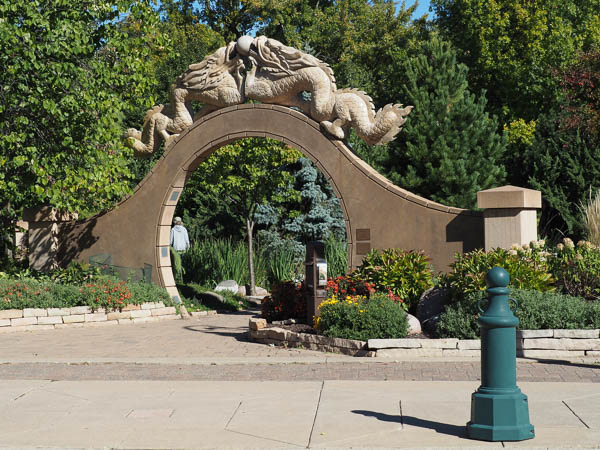 The city of La Crosse, WI, has a friendship garden at the confluence of the La Crosse and Mississippi Rivers. La Crosse has sister cities from three continents, and the garden showcases plantings and garden designs from those areas. There are Cameroon, Chinese, French, Irish, German, and Norwegian gardens. We wondered if they plan to collect a sister city from South America to round out their collection.

The city is named for the Native American ballgame of La Crosse, first encountered by the French in this area. The Europeans thought the playing sticks looked like bishops' croziers, hence the name. 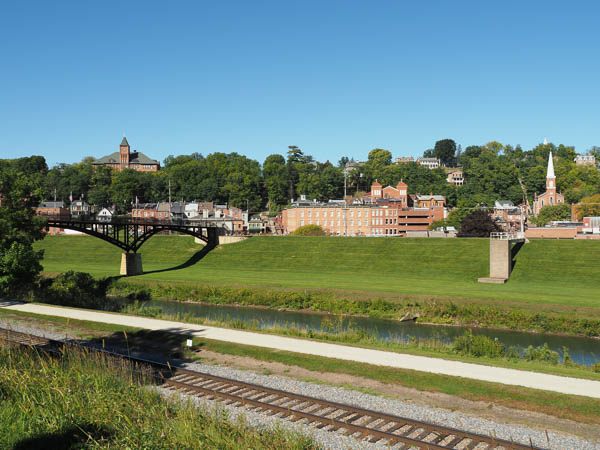 Prior to the trip we had reserved seats on an excursion to Ulysses S. Grant's home at Galena, IL, in conjunction with our stop in Dubuque, IA. At one time Galena was the largest port in the Mississippi River system, but extensive logging on the adjacent bluffs caused the Galena river to silt up at around the same time as the lead ore market dried up and the harbor was closed.

This overview gives an indication of how large the river had been and a picture of its current diminished size. At present the population of Galena is a little over 3000, but many of the well-maintained houses are second homes for people who live in Chicago.

One of the new things we learned on this excursion was the existence of the driftless area of parts of Illinois, Iowa, Minnesota, and Wisconsin. This region was never glaciated and features steep river valleys carved into the plateau. 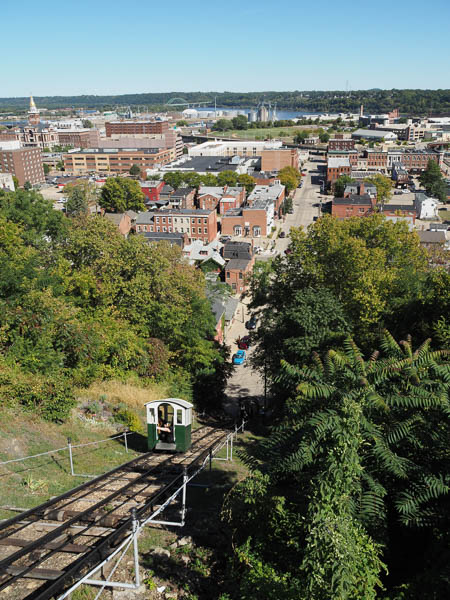 After returning to Dubuque, I had time for a brisk walk to the "shortest and steepest" funicular. A wealthy businessman built it to accommodate the commute between his home on the bluffs to downtown. The cars are tiny, holding about eight friendly people.

Everybody needs a "day off" and the day in Davenport, IA, was mine. The only excursion that I made was the the Quad Cities Botanical Center on Rock Island. It had a neat children's garden, which will be featured in the detailed pages, and several plantings reflecting native prairie plants along with its extensive confer collection. 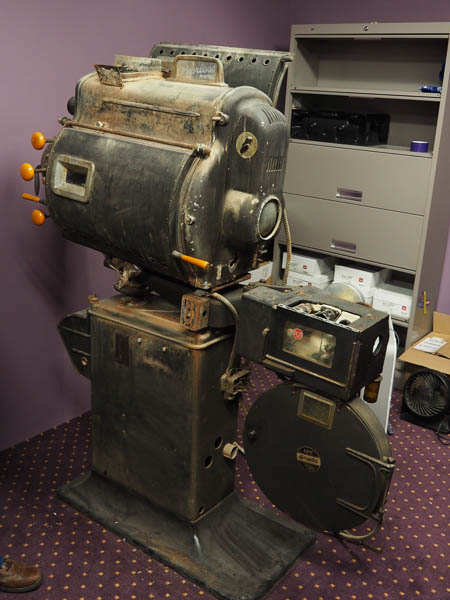 One of the featured stops in Burlington, IA, was the restored Capitol movie theatre. It is now a multi-use performing arts center, but they have preserved this carbon arc projector that was one of a pair used back in the day.

The first film shown at the theatre after it opened in 1937 was The Prince and the Pauper, with Errol Flynn, and the last before it closed in 1977 was Carrie. The facility stayed closed for many years. It was vandalized and deteriorated as unused buildings do.

A local group purchased the theatre and an adjacent building in 2005 and began its restoration. 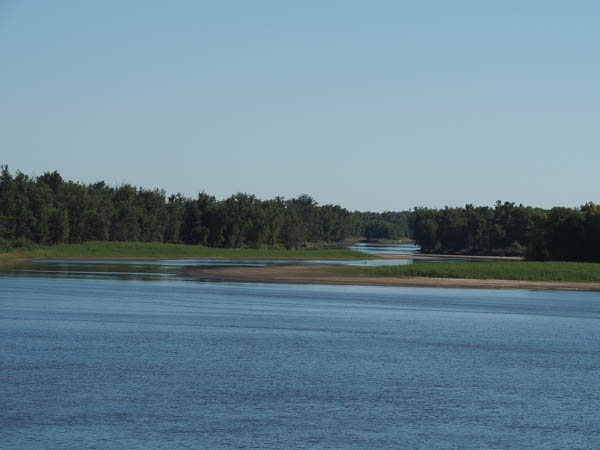 After leaving Burlington we enjoyed weather warm enough to use our balcony to watch the river go by. We saw gulls, pelicans, herons, and other birds along the shore. Many islands lined the eastern bank.

While eating dinner we passed an imposing and ecclesiastical-looking structure on the left bank. Subsequent research showed that it was a Mormon temple in Nauvoo, IL.

Another dinnertime mystery were several collections of water plants that I believe were American Lotus, native to this area. 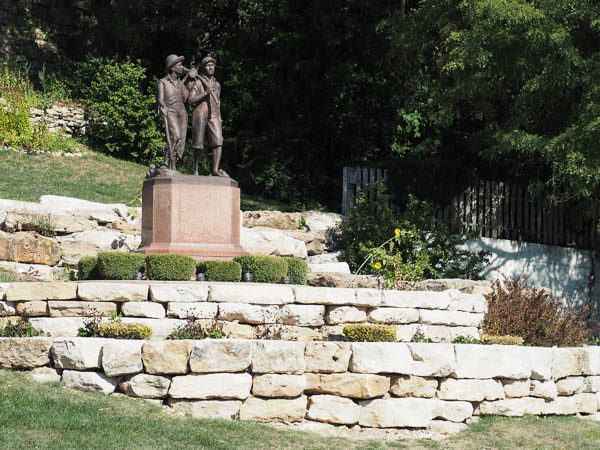 After leaving Hannibal, I got a complete sequence of pictures passing one of the last Mississippi dams: Lock and dam 22. Click to find detailed information about the construction of this dam.

The Corps of Engineers plans to upgrade this dam with a fish passage project to support fish migration along the river. The project would affect only the spillway portion on the far side of the river from the lock. It was funded in January, 2022, by the Infrastructure Investment and Jobs Act and is expected to take three to five years to complete once work begins. 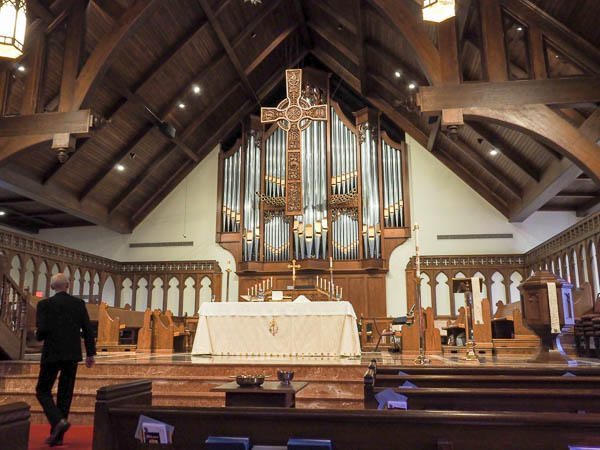 Plan A was our scheduled stop in St. Louis, MO, but that was nixed because of either low water or high crime or both.

Plan B was a backup stop in Kimswick, MO, but that also fell to low water.

Plan C was Alton, IL, where most of the potential attractions were closed on a Sunday morning with little prior notice.

So I went to church (although that should be Plan A in any event).

The First Presbyterian Church had burned in 1989 or thereabouts, but they did a lovely job of rebuilding it. The guest preacher for the morning was the current mayor of Alton, who had been a pastor of a local church in the past. He was an inspiration. 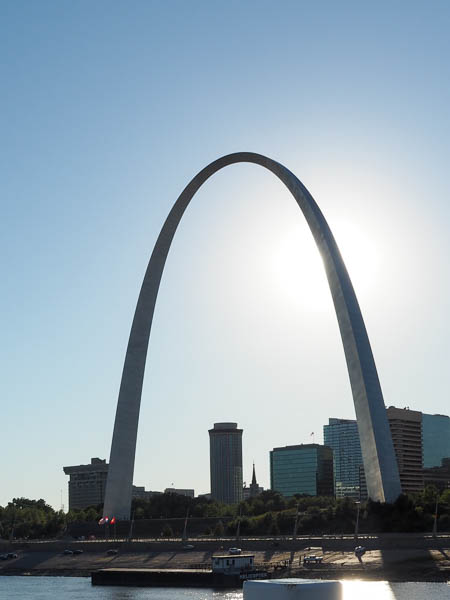 Although we couldn't visit the St. Louis Arch as planned, I did take pictures as the boat cruised by. It is impressive in its simplicity. The sun's angle made getting a shot a challenge, but I was able to get an "eclipse" type of shot with the sun behind the arch.

Later in the trip I found out that tickets to ride up the arch are sold out weeks in advance. That softened the disappointment.

The following afternoon our voyage on the Upper Mississippi River ended at the confluence of the Mississippi and Ohio near Cairo, Illinois.

We expected to see a change in the color of the water, the Mississippi being brown and the Ohio green, but they both reflected the blue of the sky equally.