During his presidency Jefferson realized that "retirement" from public life at Monticello would prove elusive. He began designing and building a private retreat on the Poplar Forest plantation his wife had inherited from her father. Since he only had himself to please, he indulged his mathematical fancies in design. The result was a residence that suited him, but no one else.

Jefferson left the estate to his grandson Francis Eppes, who promptly sold the "unfinished leaking hull of a house" with its property and moved in 1828 to the then-frontier of Florida. The house suffered fire and extensive modifications before the non-profit Corporation for Jefferson's Poplar Forest purchased it in 1984 with an eye to its preservation. Since that time archaeologists and restoration specialists have been hard at work.

Jefferson's design included the surrounding landscape, but our focus was the house. The landscape is just beginning to be restored after extensive research. 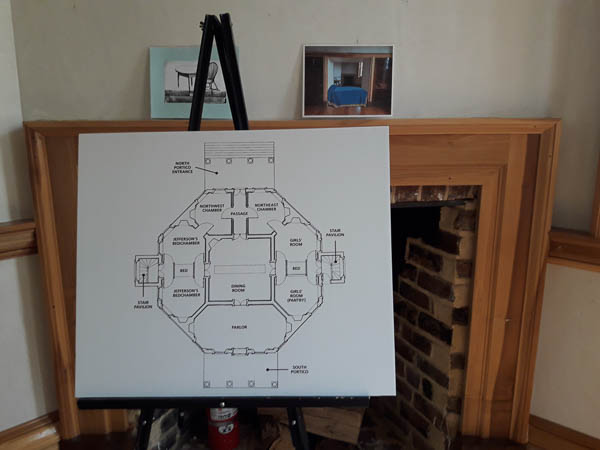 Jefferson was fascinated by octagons and this personal project gave him the opportunity to pursue the purity of the form.

The house is a regular octagon with eight equal sides. The interior rooms, except for the center dining room, are also octagons. (The entry hall bisects one of them). This allows multiple windows in each exterior room to provide ample light and cross ventilation.

The hallway leads to the central dining room, a perfect cube: 20' x 20' x 20'. Although windowless, the room is illuminated by a skylight and light entering through glass doors on two sides.

Even Jefferson, who felt that stairs were wasted space, had to bow to necessity and include stairwells on either side of the house. To balance the stairwells, Jefferson added two porticos. 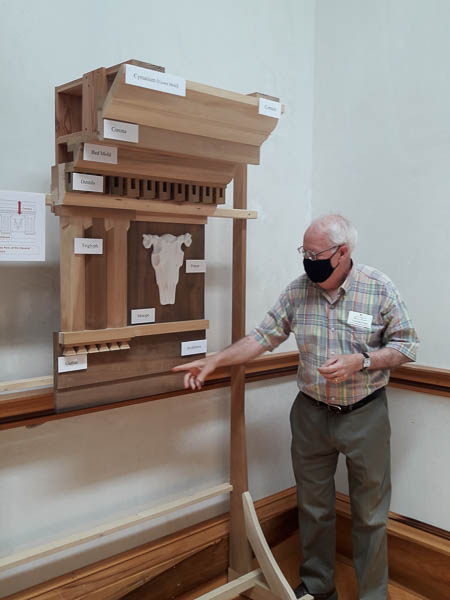 At Poplar Forest Jefferson followed the formal classical orders that dictate proportions and styles ... with some mix'n'match to suit himself. The exterior portico used Tuscan order columns. The central room of the house used Doric order decoration, with a difference.

Our guide explains this entablature exhibit that explains the various bits and pieces. One variation that Jefferson introduced was in the frieze. When Jefferson corresponded with the sculptor producing the frieze decorations, he specified both "Apollo" heads and bucrania (ox-skulls). The sculptor pointed out that in keeping with the formal style it should be one or the other - not both. Jefferson replied that it was a private, not a public space, and he wanted both, thank you very much. He got both.

The reproduction scultural elements are produced with 3-D printing, one of the few concessions to modern materials. 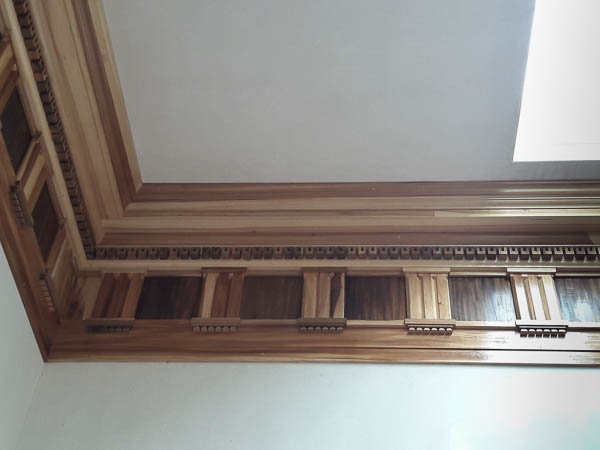 The installed entablature. The sculptures will be placed in the open areas (metopes). When the room is finished, all the woodwork will be painted white.

A portion of the skylight is visible in the ceiling. 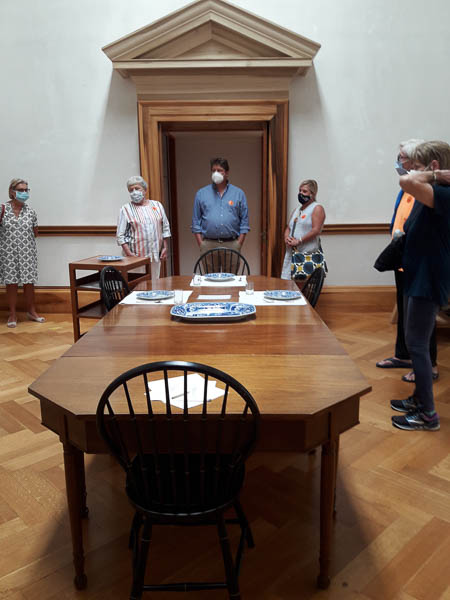 Masks are still required inside, but tour sizes are no longer limited to five participants.

Jefferson specified oak for the flooring. Oak was widely used in Europe at the time, but his was an early use in the U.S. He gave detailed instructions for the herringbone pattern.

The custom dining table has the same octagonal shape as the house. The house will never be furnished for display because its focus is on the building, not the furnishings. The Windsor chairs, although reproductions, were also ordered by Jefferson for the house. They provided handy resting spots for tired tourists.

Although there is no artificial light in the house, this room is well lit by the skylight and the light coming from adjacent rooms. 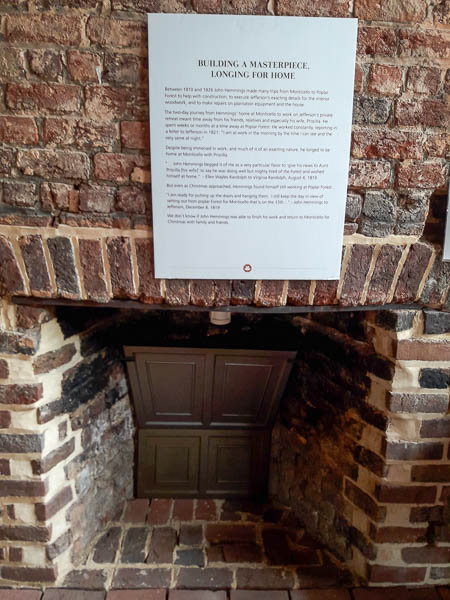 One of the modern, for the day, technologies used at Poplar Forest was the Rumford fireplace. (The description at the link was the least technical and easiest to understand.)

The cast iron fire-back has questionable efficiency. I'm sorry that I didn't ask more questions about the fireplaces.

The placard doesn't discuss the fireplace. One of the skilled slaves at Poplar Forest was John Hemmings, the half-brother of Sally Hemings, who may (or may not) have been the mother of several of Jefferson's children. The placard describes John's desire to be at home with his wife at Monticello rather than stranded here at Poplar Forest. He was a skilled joiner and indispensible to the construction. 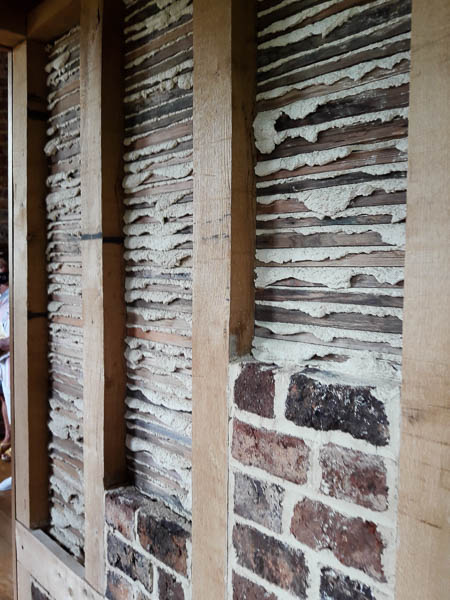 One room will be left unfinished to show construction details.

This screening wall, which is plastered on its far side, illustrates the technique of plastering wherein keys bind the plaster to the lath. This wall would have been part of an alcove bed. See below for a "finished" product. 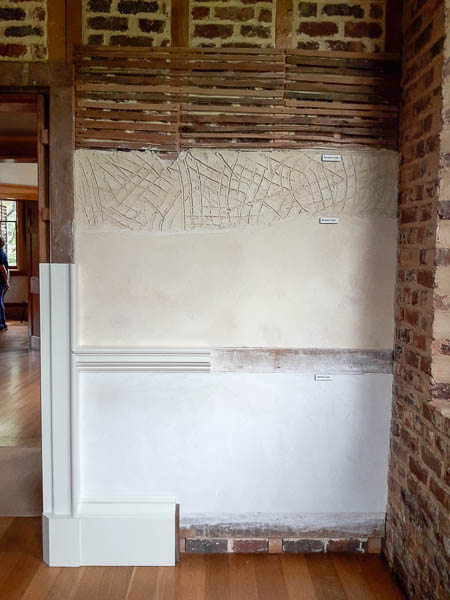 Wooden lath is covered by a "scratch coat," then a rough "brown coat," and finally a smooth "white coat." A board set into the plaster provides a nailing space for the eventual chair molding.

Where plaster walls are finished, they will be painted using historically accurate paints. The restorers have found samples that indicate what colors were used by Jefferson. 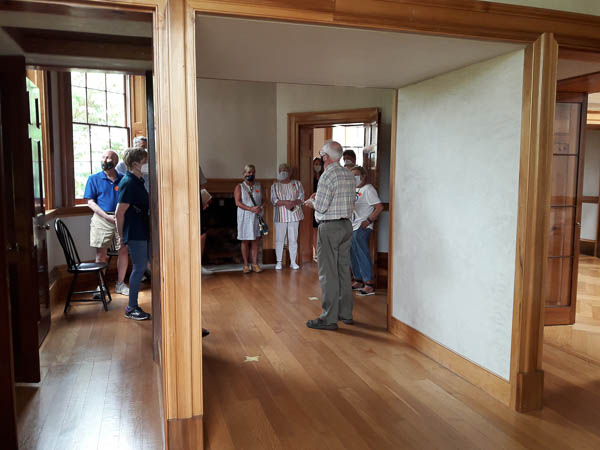 While serving in France, Jefferson encountered alcove beds. Normally such beds are built into a three-sided alcove, but he modified the design to be open on both sides.

Curtains may have covered both sides of the alcove for warmth and privacy.

This was Jefferson's own bedroom. The bedroom on the opposite side of the central dining room was reserved for his grand-daughters who frequently accompanied him on his Poplar Forest retreats or for less frequent invited guests. 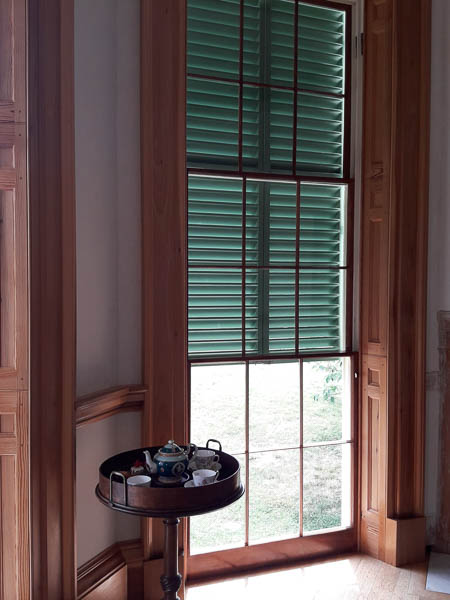 The parlor, on the south side of the house, has large sash windows shaded by louvered blinds.

Jim and the guide had a spirited discussion of sash ropes.  Jefferson's hemp originals are no longer available in the US. The restoration team found a supplier in the Netherlands who agreed to make custom ropes to exact specifications:  number of strands, style of weave, twist, etc. They ordered enough to last for years!

The louvered blinds are opened and closed as needed to deflect light and heat while allowing air flow.

One benefit of not including antique furnishing in the display is freedom from rigorous temperature and humidity constraints. Although heating and air conditioning are installed, the site relies on natural ventilation as much as possible. On nice days the windows and doors are opened. The octagonal shape contributes to good air flow regardless of the prevailing breeze.