From the program materials:

We will drive to Vila Nova de Foz Côa and visit the Museum of Prehistoric Rock Art Site in the Côa Valley. With a local expert, we will discover the prehistoric history of the Douro Valley, which has been inhabited continuously since the end of the Paleolithic Age. 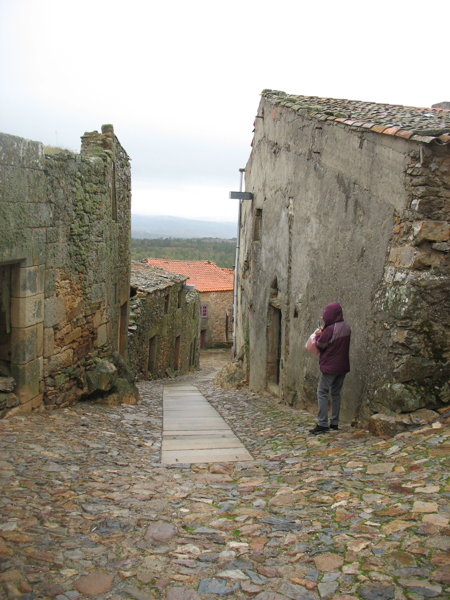 Our first stop of the morning was Castelo Rodrigo, an historic village on top of a mountain overlooking the Spanish border.

The village still has a small population, but much is in ruins. The weather was beastly cold, rainy, and windy. If the signage had been better or if I could have gotten oriented with the map they supplied, I might have explored more, but it wasn't, I couldn't, and therefore I didn't. 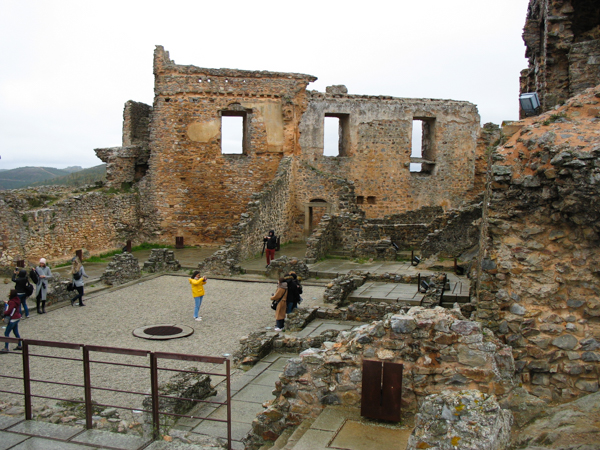 Victorious royalists burnt the palace in the 17th century and it remains in ruins. The builders incorporated underlying granite of the mountain into the foundations and some of the walls. 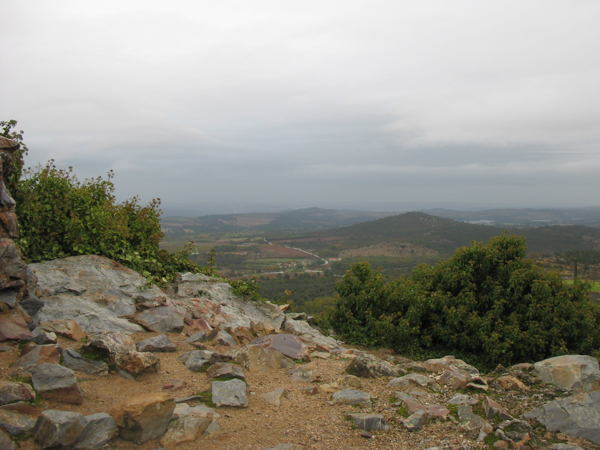 The view from the palace heights into Spain is extensive. The views in every direction are extensive!

The inhabitants were not only concerned about the potential of a Spanish invasion, but also an attack by the Moors. 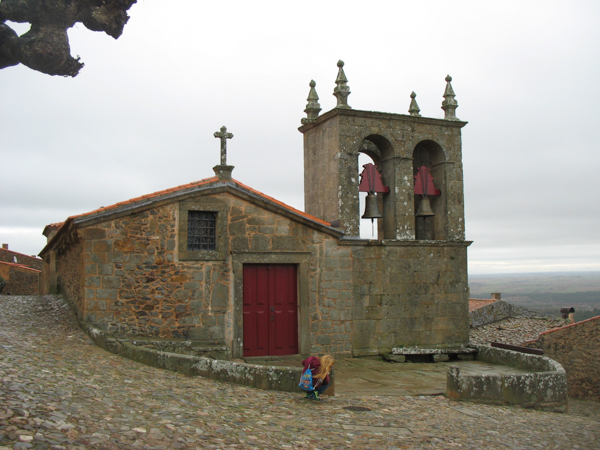 By the time I got to the little church, it was locked. I was too cold to climb back up to the tourist office to get it reopened.

Friars tasked with welcoming pilgrims along the Pilgrim's Way built it in the 12th century. The altar has the traditional scallop shell like we saw in Guimarães. 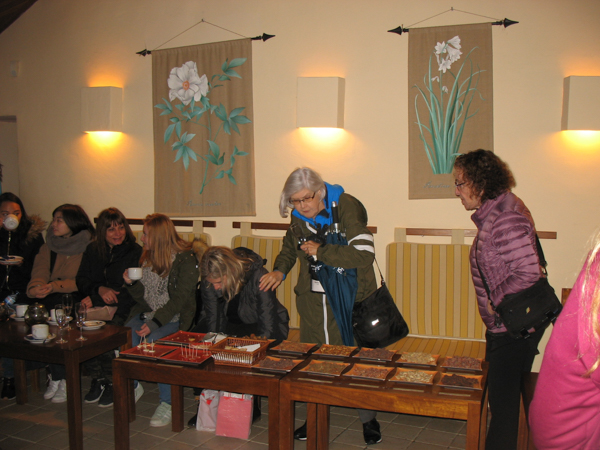 After eyeballing the church I made a beeline for the warm cafe were we were told to expect almonds and a warming drink.

The almonds are a local product, and in recent years the producers have explored ways to market them better. The trays on the table contained many flavors of almonds. My two favorites were bitter chocolate and ginger, although of course I tried them all. 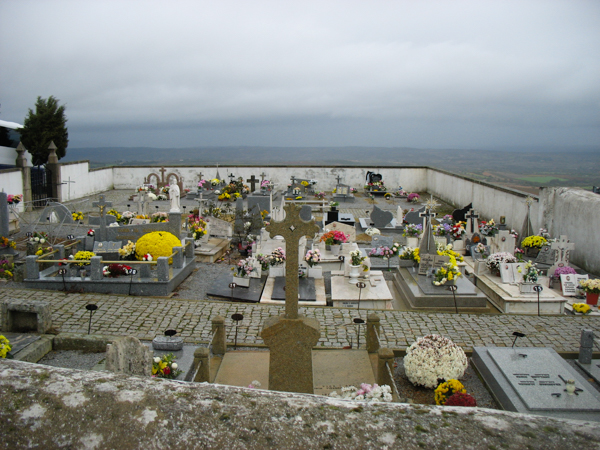 A cemetery with a view!

Although the "day of the dead" isn't as big a deal in Portugal as in Mexico, All Saints Day, November 1, is a traditional time to decorate the family graves. Many of the flowers were still fresh a week later. 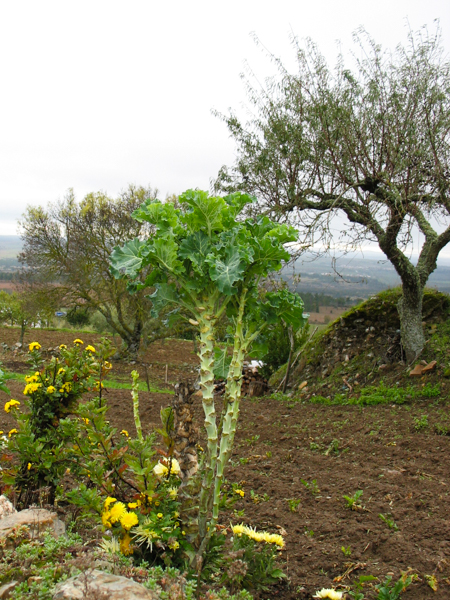 Whenever we go on these trips we have to supply information on food allergies. I always specify that I'm allergic to kale, but it has never been a problem. In Portugal, however, kale almost has the status of a national dish.

Here it is on the hoof. Just about every garden we passed was growing kale.

It is curious that I am allergic only to kale and not to any of the other members of the brassica family such as cabbage, broccoli, or collard greens. I've never had the nerve to try it again, however, after getting hives twice after eating it. 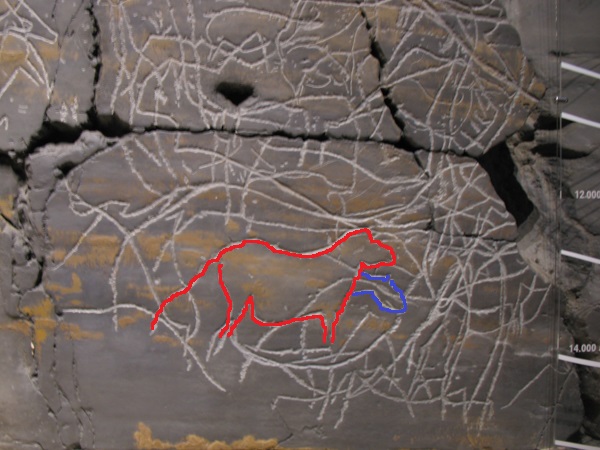 After Castelo Rodrigo we proceeded to the Museum of Prehistoric Rock Art.

The Côa Valley is a tributary of the Douro valley. Plans were afoot for another dam on the Douro when engineers preparing footings for a bridge uncovered massive deposits of prehistoric rock art. After some years of controversy, the dam was abandoned and the Côa Museum was built to display the history of the site.

I have outlined the horse etching on this reproduction of the original carving. A common feature of the carvings, possibly made as early as 20,000 years ago, is movement indicated by adding multiple legs or heads. In this drawing the horse's head is shown in two positions: one red and one blue.

Although we only visited the museum (and had far too little time), the actual site may be visited by reservation. 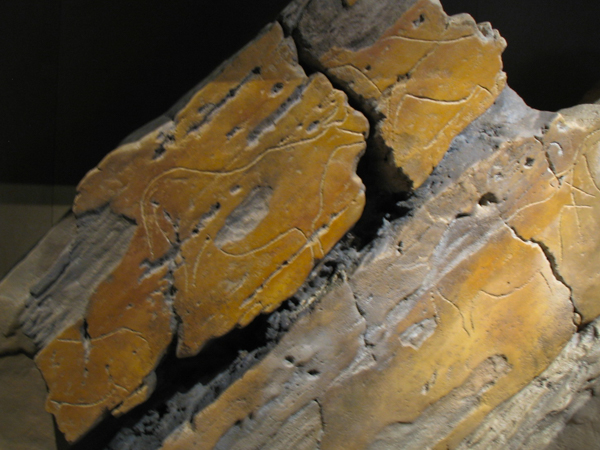 The ancient artists also used fault patterns in the rock to depict terrain. These aurochs appear to be climbing up a steep hill away from the river.

During the time these images were created, the area teemed with wildlife including aurochs, horse, deer, and ibex -- all of which were featured in the engravings.

An advantage of seeing the reproductions in the museum rather than the originals is that the lighting is controlled to provide the highest contrast. The actual engravings are difficult to see in certain lighting conditions.

After our tour we had a delicious lunch at the museum. No one goes hungry when travelling with Road Scholar! 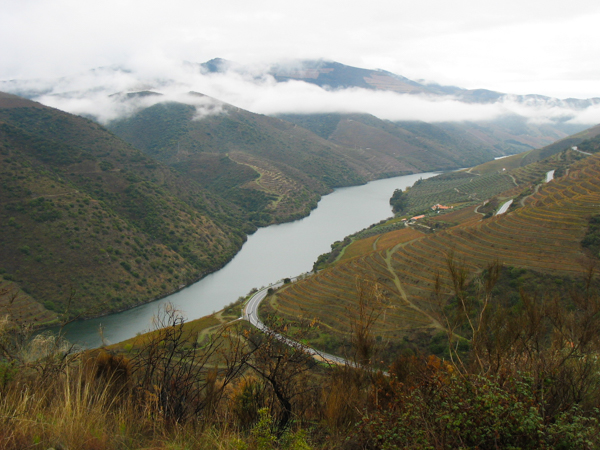 The rock art sites are located on both sides of the Côa River. The confluence with the Douro is to the left of the picture. 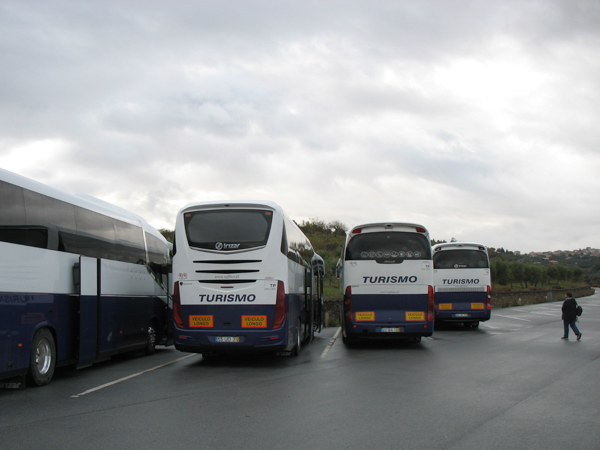 One of the luxuries of this excursion is that we had the same four buses throughout (our "green" bus is on the far right). It was great not having to learn new buses all the time. 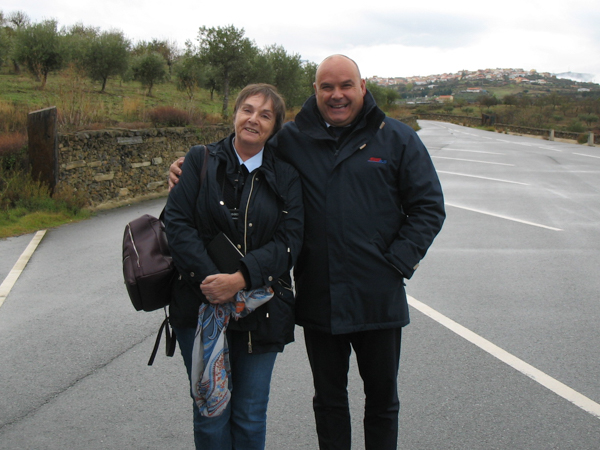 Our wonderful guide Paula Moreira and bus driver Nuno. We found out over the course of the trip that Paula was giving our group more interesting background than some of the other guides. And Nuno was an expert at guiding that bus through tight squeezes -- both forward and backward!

After our return to the ship, it began its trip downriver. That night we tied up at Senhora da Ribeira, a tiny village by the river. Some folks decided to stretch their legs by walking through the village, but declared that there wasn't much to it. 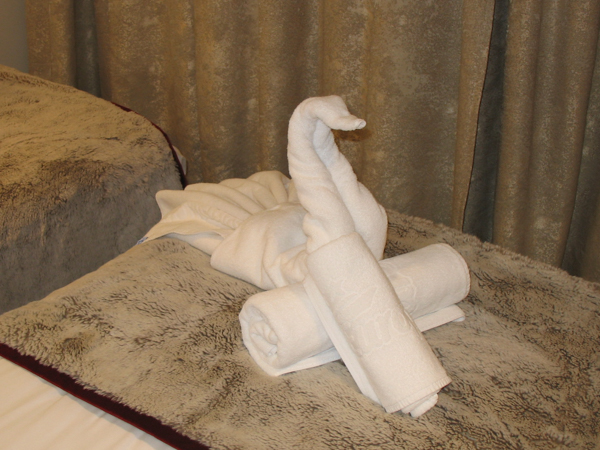 That night we were treated to a towel swan in our cabin.

The crew presented a variety show performance after dinner this evening. We heard it was delightful, but again it was past our bedtime.