As we cruise upstream this morning, our Study Leader [Isabel] will present a lecture on board the boat about the history of the vineyards of the Douro and the great Porto wines.

After leaving the boat in port, we will head out by motor coach with our Study Leaders to explore the town of Vila Real, famed for its architectural styles, made possible by the prosperity brought by the port wine trade and gold from Brazil. We will then visit a local quinta (wine estate) and learn about wine production before having dinner at the estate. 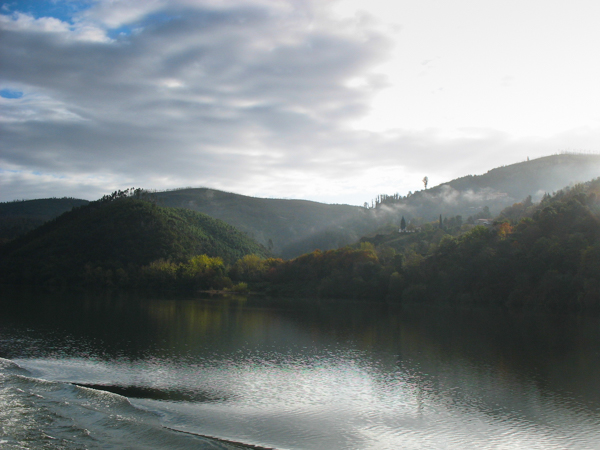 We learned that traveling on the Douro River is prohibited at night because the river is narrow with rocky shores and bottom. That was fine with us because it meant we could sleep without the rumble and vibration of the ship's engines. 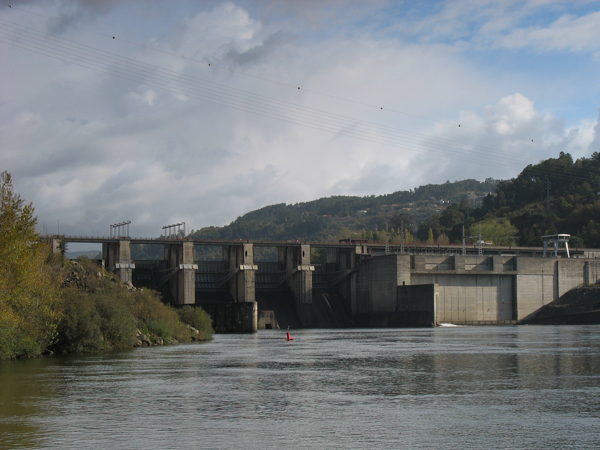 The first adventure of the day was transiting the Crestuma Lock.

There are 15 dams on the Douro River, but we will only pass the five that are in Portugal. Five of the others are in Spain and five along the border with Spain. 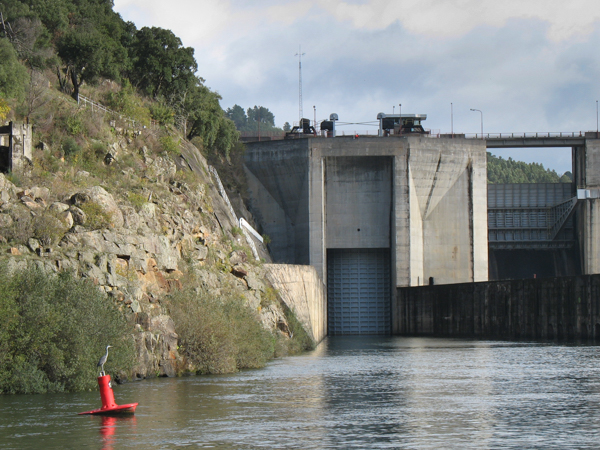 The lock gate was closed because a ship was coming downriver. We pulled to the side of the entrance to give it room to pass. 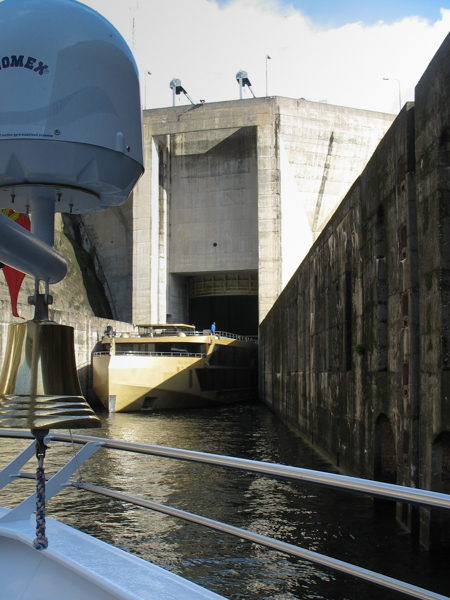 The downriver ship is the AmaWaterways AMADouro.

These passenger ships are designed to be the maximum size for these locks. There wasn't much room left over when we were in the lock. 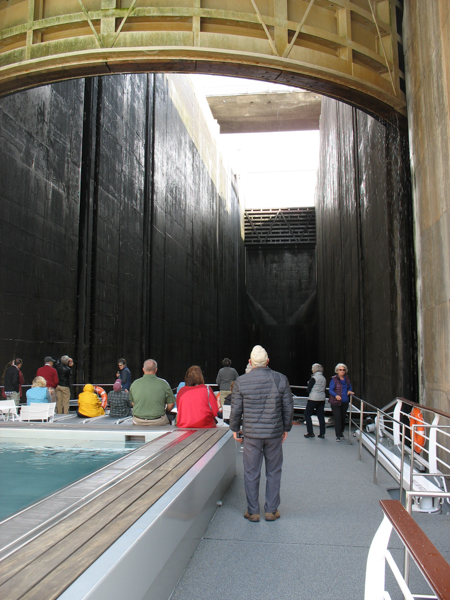 It's our turn. This was the shallowest lock we would traverse at "only" 14 meters. The deepest was 36 meters -- over twice the depth. 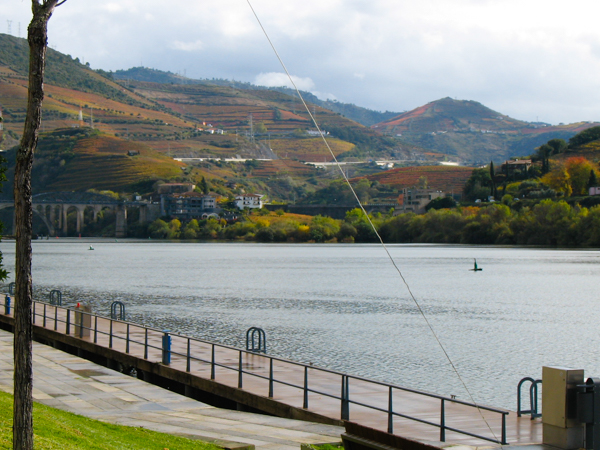 After lunch we arrived in Régua. We would stay alongside here for two nights. Half of the group would travel to Lamego today. Our half visited Vila Real and its environs. Tomorrow the groups would reverse the excursions.

The vines are beginning to put on their fall colors. 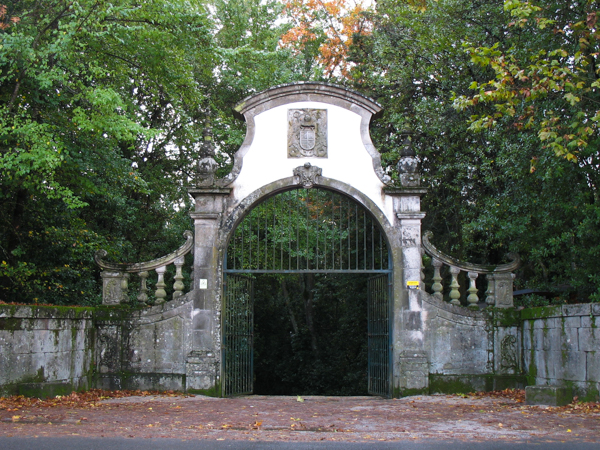 Many of us remember Mateus wine: the fizzy rosé in the fat little bottle.

The House of Mateus outside Vila Real has nothing to do with the fizzy rosé in the fat little bottle although at some point the rosé producers got the license to use the image of the house on those fat bottles. 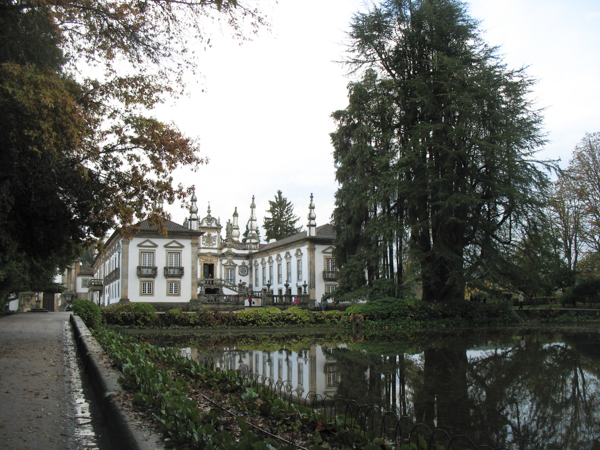 The house dates to the 18th century but the estate and the family are much older. The current count only resides at the house on occasion. Since the family was in residence at the time of our visit, we were only able to tour the public rooms and the garden.

The large tree by the lake is a deodar cedar planted in 1870 or thereabouts. Our arborist has told us that our own deodar cedar is one of the largest in the area, but since it was only planted around 1992 I don't expect we will live to see it reach this size.

The stable indicates that however opulent the accommodation for the count and his family, their horses didn't get the luxury of loose boxes. There was space for a large number of animals in these standing stalls.

The formal gardens were extensive and worth touring in the rain. 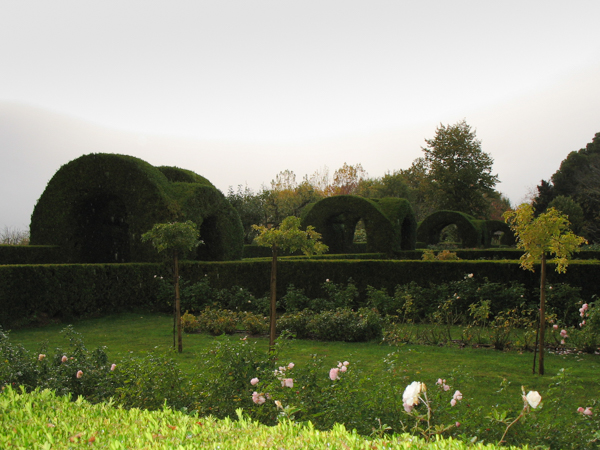 The roses were almost all gone by now. The topiary arches and hedges made a nice walkway.

There was also a topiary tunnel formed of large cedars that led to another portion of the garden.

The last rose of summer. 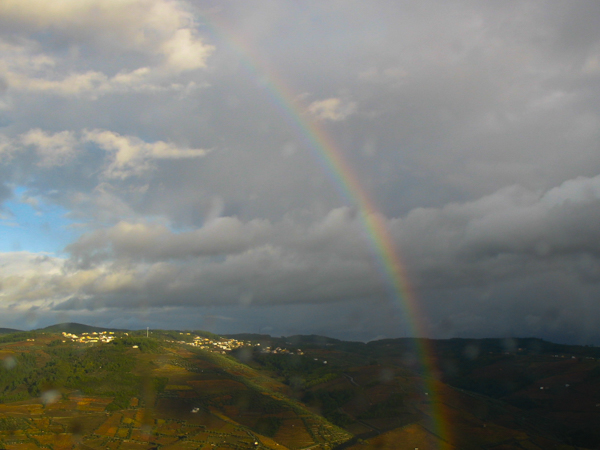 You can't have a rainbow without a little rain.

As we returned to the ship, we passed through occasional showers. 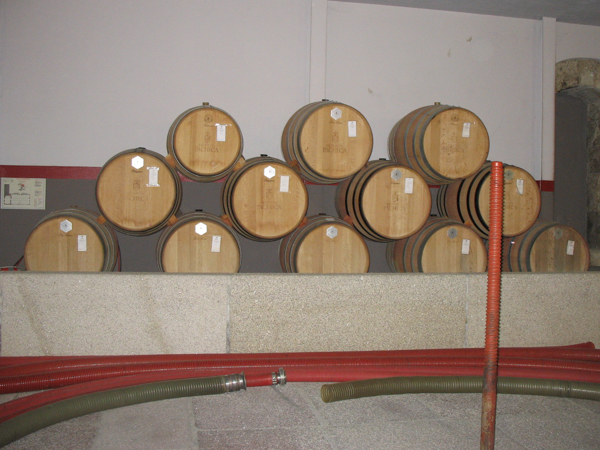 That evening we visited a local winery: Quinta da Pacheca. The vineyards date to the 16th century and the estate was first documented in the 18th century.

The winery still uses the traditional method of pressing the wine by foot. In fact it has turned it into a tourist attraction. The presenter said that his father could not believe that they were now getting people to PAY to do the work rather than the other way round.

The stompers work in one hour shifts and the work is strenuous. These granite tanks are knee high filled with grapes and the pressers link arms in a row -- probably to help stay upright.

After the presentation we had a delicious dinner in the aging room.