The Straits of Mackinac connect Lake Michigan to Lake Huron. Other than walking and bicycling, the only mode of transportation allowed on the island is horse-drawn carriage. Automobiles weren't prohibited because of environmental concerns, by the way, but because of political action by the association of carriage drivers in the early 20th century. (Snowmobiles are allowed in the winter for the small resident population.)

We had a lot of discussion about the environmental impacts of horse manure on the island. In the heyday of the island's Victorian popularity, people came to escape the heavy pollution of horses in the cities. We heard ghastly statistics about the amount of horse manure and dead horses (!) that accumulated in the streets of Chicago, for example, not to mention the effluvia from the city's many meat packing plants. Visitor letters raved about the sweet air found on the island.

As you might imagine, I didn't even notice the odor from the widely scattered piles of manure, and my feet automatically avoid stepping on poop piles.

We started the day with a carriage ride around the town.

Most of the horses used on the island are Belgians. Our guide asserted that they are the strongest draft horses for their size. The island is summer home to 600-odd horses, but most of them are taken to winter quarters on the mainland at the end of September. Belgians don't have heavy feather (long hair) on their legs, which makes them easier to keep clean.

Percherons are also used and high-stepping Hackneys are popular for fancy events such as destination weddings. Riding horses are also available for hire.

The harness horses are either purchased at auctions, typically from Amish farmers, or rescues. They work into their 20s and are then retired.

Most of the draft horses we saw had their tails docked like this pair. It is a controversial practice and has been condemned as unethical (link opens in new tab) by the American Association of Equine Practitioners. Nevertheless it is still done in some places. 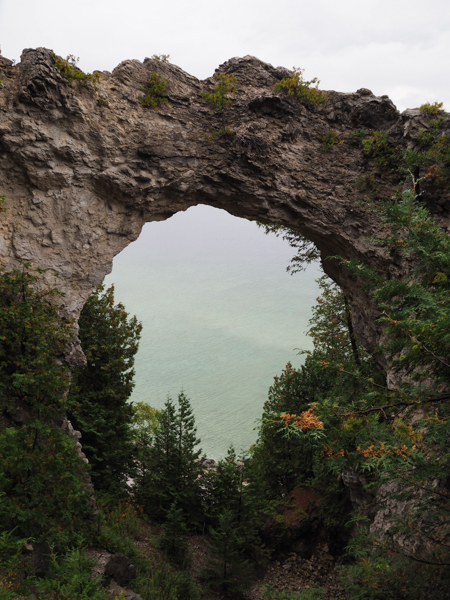 After our ride through town, we stopped at a place for a bio break and shopping opportunity. We then loaded into a larger carriage pulled by three horses for an excursion to Arch Rock and Fort Mackinac.

It was a grey and drizzly day, so the color of the water through the rock wasn't as vibrant as it might have been. The leaves are just beginning to turn. It must be spectacular in a week or two. 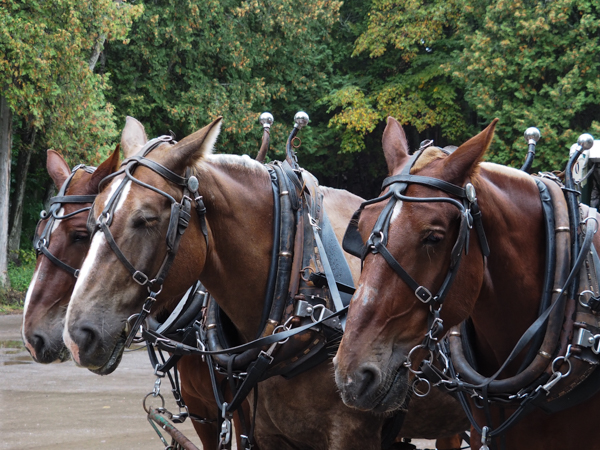 Our trio of carriage horses. These were also Belgians, but we did see some carriages pulled by Percherons and one carriage included a spotted draft horse. When asked our driver said it was Canadian.

The drivers each have two teams and are responsible for all their care. The horses are worked half a day. The carriages all have brakes to help the horses manage downhill sections, some of which are quite steep, and to give them frequent breaks on the uphill sections. 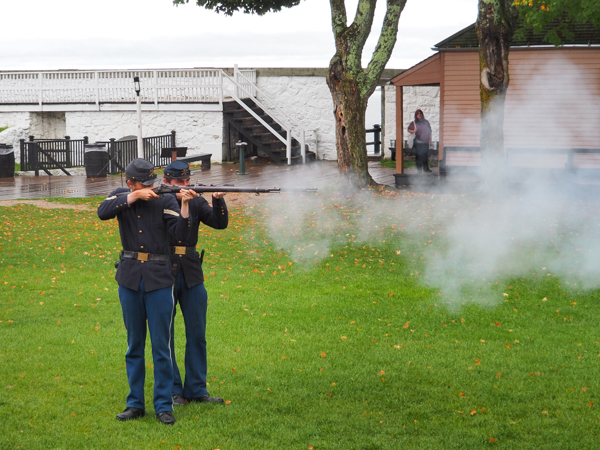 By the time we reached Fort Mackinac, it was raining pretty steadily. Most folks stayed either indoors or under some kind of shelter.

The French founded the fort, the British occupied and reconstructed it during the American Revolutionary War, ceded it to the U.S. in 1780, and retook it at the beginning of the War of 1812. Eventually it landed in American hands again.

The only picture I got was of the firing demonstration. We had seen a musket firing demo at Niagara. A very accomplished soldier could load and fire a musket every fifteen seconds. By the 1880s, which is the time represented at Ft. Mackinac, rifles had come into use. Although still single-shot these Springfield rifles could be loaded and fired in about five seconds. Muskets were not accurate weapons, but in the hands of a sharp-shooter these rifles could hit a target at 1000 yards! The Army training didn't take advantage of this capability until after the disaster at Little Big Horn. The information at the link above parallels what was presented during the demonstration.

A factoid from the presentation was the comment that soldiers were not allowed to own civilian clothes in order to limit desertion! The blue with yellow stripe was a give-away. 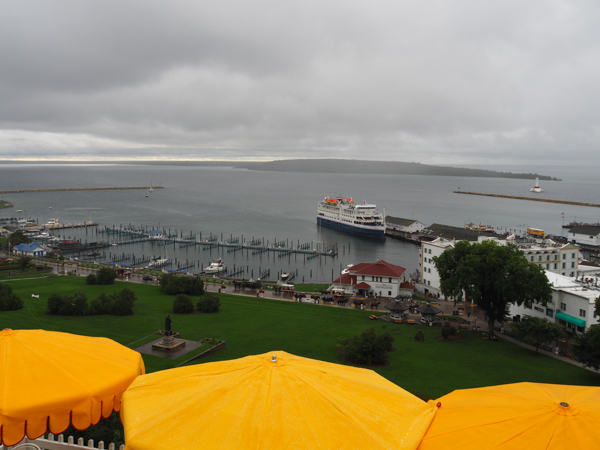 After our time at the fort, we climbed back into carriages for the short ride to the Grand Hotel for lunch. The bright umbrellas livened up the grey outlook over the harbor and our ship.

The engineers were hard at work all day and we were glad to hear that the ship was pronounced healthy and ready to sail at the scheduled time. We later heard that had the Coast Guard not cleared it to depart, Plan D was an 8-9 hour bus trip to Chicago. You rock, engineers!

By the time lunch was over the rain had stopped and there was actually some sunshine. We decided to take advantage of the interlude and walk into town. Some light spritz didn't deter us from seeking out some of the island's ice cream -- just in case we needed more food.

The island's (and northern Michigan's) major product is fudge and day-trippers are called "fudgies." We managed to avoid that confection.

The hotel is supposed to have the longest porch in the world. I can believe it. 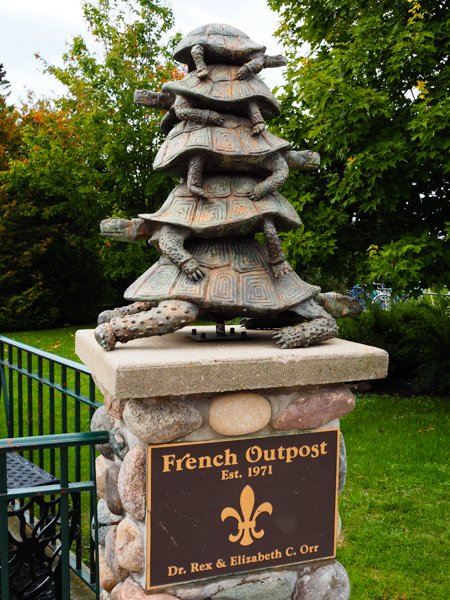 The name Mackinac, which is pronounced "MAK-i-naw," comes from an Ojibwa word, mishimikinaak, meaning "great turtle." It may (or may not) come from the notion that the shape of the island resembles a turtle.

In any event, the turtle is now associated with the island.

One of Fred Stonehouse's lectures was titled: "Mackinac Island: Bits & Pieces of the 'Great Turtle'." 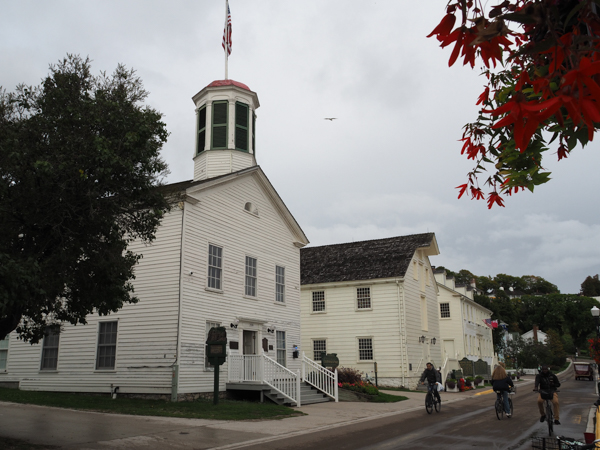 The island gained prominence as a trading center for the fur trade -- primarily beaver. John Jacob Astor founded his fortune on fur. The ivory-colored buildings are two of his original warehouses.

The prize part of the beaver pelt is the undercoat used to make beaver felt, the material used in beaver hats. The information at the link provides details.

Beavers were hunted almost to extinction, but have made a comeback. They are important for wet-lands and biodiversity, but their ponds have been controversial in suburban, and sometimes urban, areas. There was a kerfuffle some years ago when a beaver family started felling Washington's iconic cherry trees. A beaver was sighted in the area as recently as 2019, but I found no word on whether he had a tooth for cherry trees. 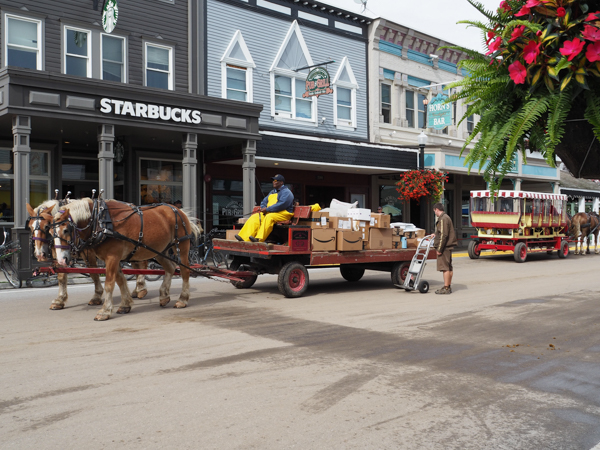 In addition to tourist carriages, horse-drawn drays are used for delivery as well. This UPS "truck" shows that Amazon is as popular on Mackinac as elsewhere. We also saw similar vehicles hauling furniture, FedEx, and large hay round bales.

All the horse fodder for the island must be brought in on ferry.

Although mechanized vehicles, except for ambulance and fire trucks, are prohibited on the island, the dock area had plenty of propane-fueled fork lifts to handle freight. 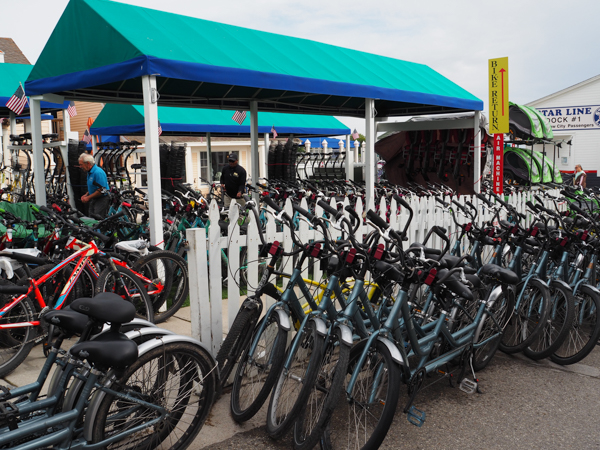 In addition to horses, bicycles are the other popular transportation on the island. I have never seen as many tandem bicycles in one place as at this dockside rental agency.

My long-time employer, Tandem Computers, used the tandem bicycle as its original logo.

Before we sailed, we enjoyed an entertaining presentation given by Grand Hotel historian Bob Tagatz. 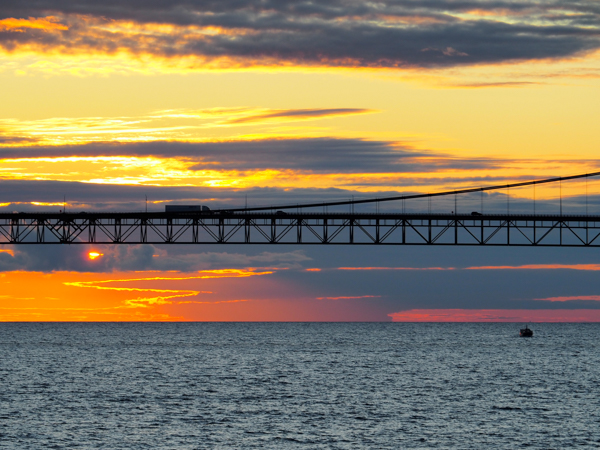 We passed under the Mackinac Bridge, separating upper and lower Michigan, at sunset -- back on schedule for our arrival in Chicago.

The bridge opened in 1957 and is the unofficial border between Lakes Huron and Michigan.

As I was preparing this travelogue, the web site above stated that a high-wind advisory had placed travel restrictions on the bridge: susceptible vehicles such as campers and semis were limited to 20mph. Our visit was just at the right time!