The original plan according to the pre-trip materials:

Today, we'll transit the Soo Locks from Lake Huron to Lake Superior at Sault Ste. Marie, Michigan. Before the first lock was built, boats and cargo had to be portaged around rapids that fell 21 feet. The first primitive lock, built in 1797, was destroyed during the War of 1812. The four present locks were built in 1855. Control passed to the U.S. government in the late 1800s and the locks are operated by the Army Corps of Engineers. We'll learn about their history, their use, and why they are regarded as "a wonder of engineering and human ingenuity" passing an average of 10,000 ships a year.

Road Scholar and Victory Cruises worked heroically to find buses and drivers to get us all to & from Sault Ste. Marie and to feed us lunch, so we were able to benefit from most of the day's planned activities. I was quite disappointed to miss the quick trip into Lake Superior as well as the transit of the locks, but stuff happens and we have to play the hand we're dealt.

Founded in 1668, Sault Ste. Marie is the oldest city in Michigan and one of the oldest in the country.

We were bus #1 of the second set. Our itinerary took us to a maritime museum in the morning and the locks in the afternoon. Bus #2 saw the same sights in reverse order, BUT they got to see ships in the locks and we did not. 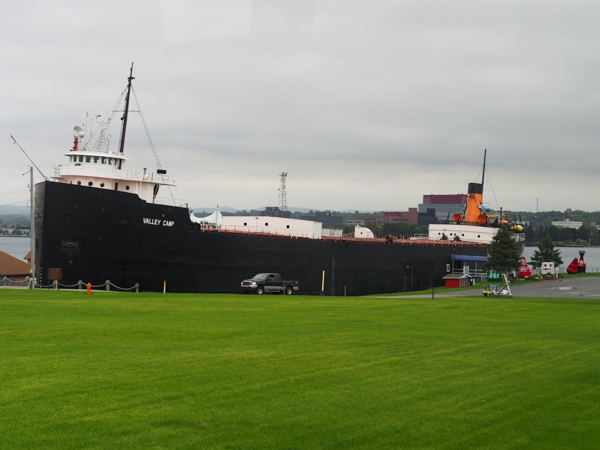 The steamship Valley Camp was built in 1917 as the Louis W. Hill. In 1955 it was sold and renamed. The ship stayed in service hauling coal and iron ore until 1966 when boiler trouble prompted her retirement. She became a museum ship shortly thereafter. 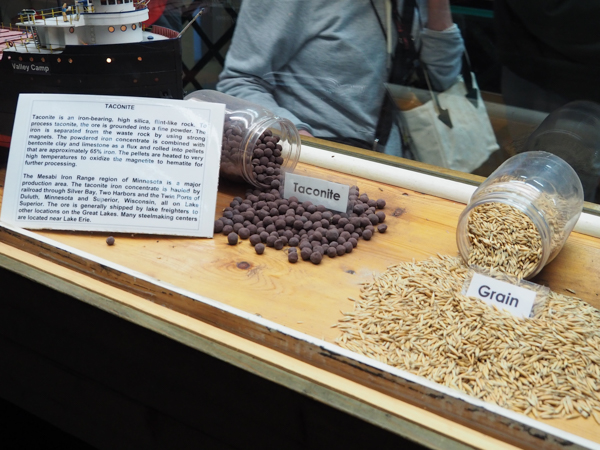 Taconite, round pellets of iron ore, was one of the Valley Camp's cargos. Taconite was implicated as a factor in the sinking of the Edmund Fitzgerald. It may (or may not) have shifted in the cargo hold when the ship ran into heavy weather and caused the fatal plunge. 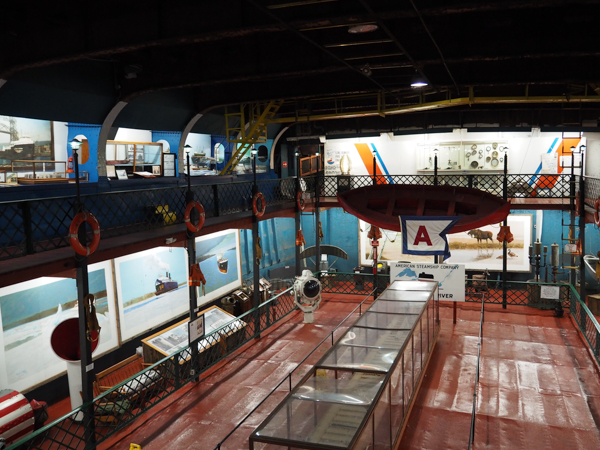 The cargo compartments of the ship were filled with exhibits describing the maritime history of the Great Lakes.

What struck me, though, was the rippled surface of the floor. Decades of dumping heavy cargo into the hold have dented the 1/4 inch steel floor.

Under the floor and along the sides of the vessel are ballast tanks that are filled with water when the ship isn't loaded. 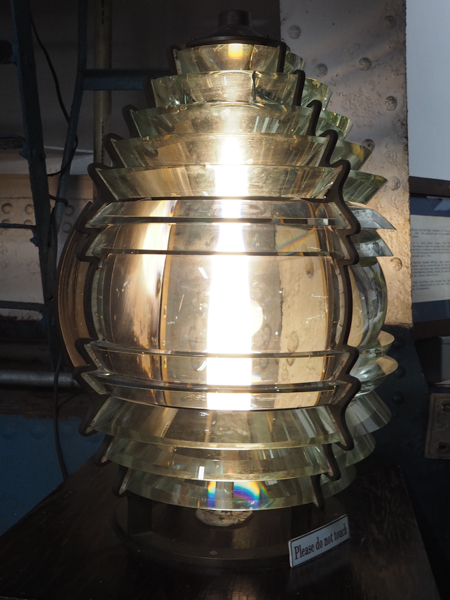 A fourth-order Fresnel lens was part of the display. This is the first time I've been able to get up close and personal with one of these beauties. 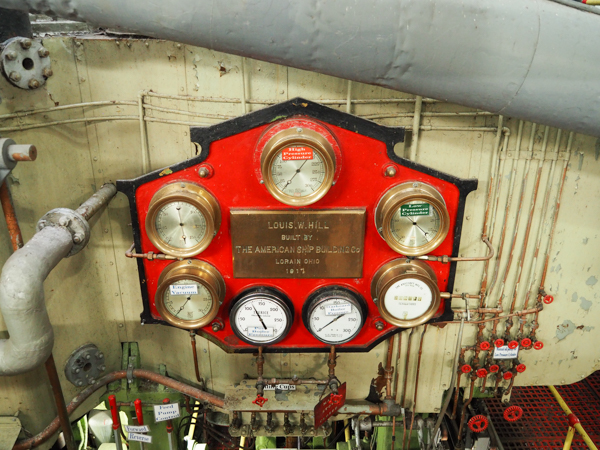 Running a steam engine of any kind is complicated. These gauges show just some of the things that have to be monitored. The label gives the original name of the ship. 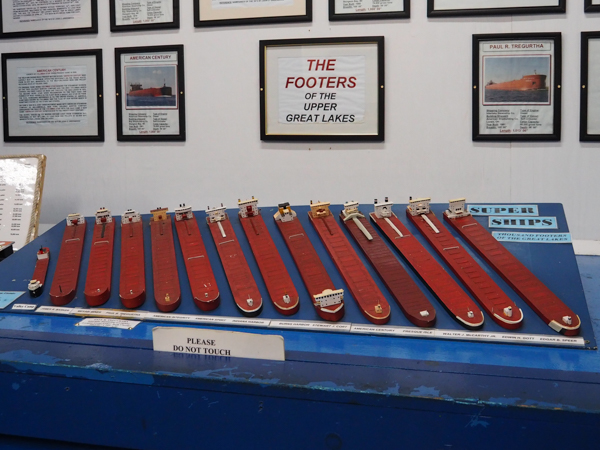 One display had models of ships over 1000' in use on the Great Lakes.

The smallest one on the left is the Valley Camp. Note how much smaller it is than the others. Think about this later when looking from the pilot house.

The American Spirit, which we saw on Lake Huron, is the 6th from the left.

The Edmund Fitzgerald exhibit included the two lifeboats that were recovered after this terrible disaster. Our featured presenter, Frederick Stonehouse, more-or-less wrote the book on this. Gordon Lightfoot, on the other hand, wrote the song. 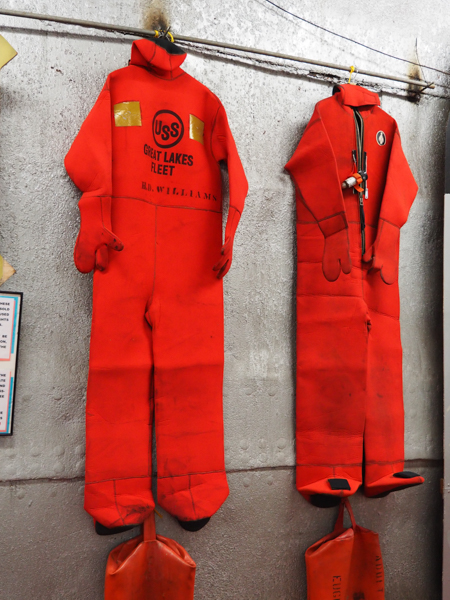 Had the mariners on the Edmund Fitzgerald had access to survival suits like these, perhaps someone might have survived. It was only after the wreck that they were approved for use by the US Coast Guard.

Most Great Lakes shipwrecks are in November. Sailors who initially survived shipwrecks died shortly thereafter from exposure to the cold. For this reason, most of the sailors mistrusted the open lifeboats. As with the survival suits, inflatable life rafts, packaged with food and blankets, were not approved for use on the Great Lakes until afterwards. 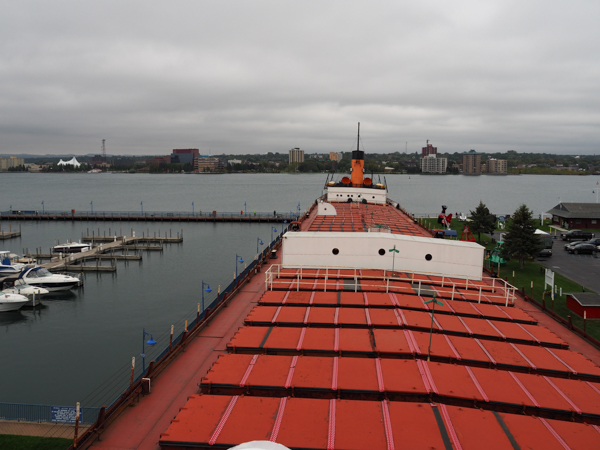 I bolted from the tour in favor of exploring the top-side. I'm sorry I didn't do that sooner because the exhibits there were even more interesting.

I am standing outside the ship's bridge. The difficulty of maneuvering a ship of this size is daunting.

While growing up on the Mississippi River, I learned the hard way about planning ahead while steering a small runabout. It takes skill to anticipate how your (tiny) boat responds to the controls. Remember those models above and think about modern ships that are almost twice this one's length and width -- it makes my head swim!

The slant of the deck is not due to my habitually crooked photography. The ship is listing. There are some large aquaria on its right side and I expect that may be the reason. 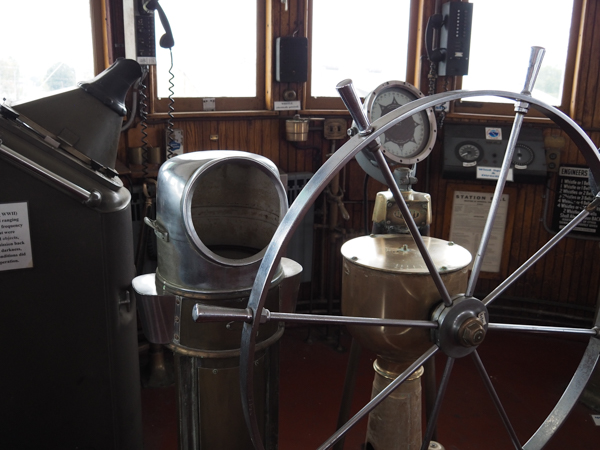 The officers' cabins were on the bridge end of the ship.

The captain's cabin was not much larger, but it was private. 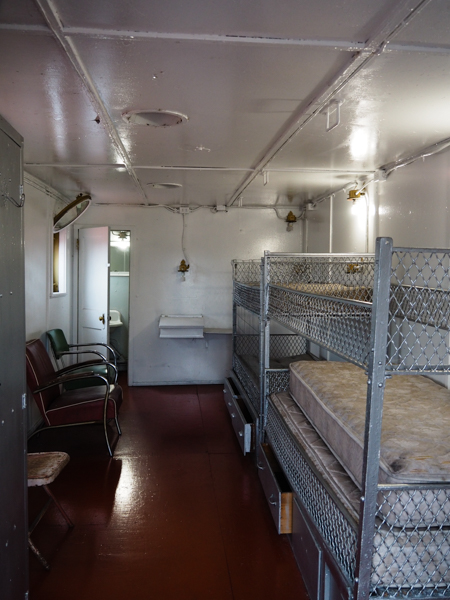 The cabins for ordinary seamen seemed pretty comfortable as well. This ship had a rather large crew because it was steam-driven so there was a substantial engineering and labor contingent.

After touring the Valley Camp, we ate lunch at a local Applebee's. The staff of our ship worked tirelessly with Road Scholar to find an alternative lunch venue for 50+ people in a small town with little notice. They did a great job -- and so did Applebees! 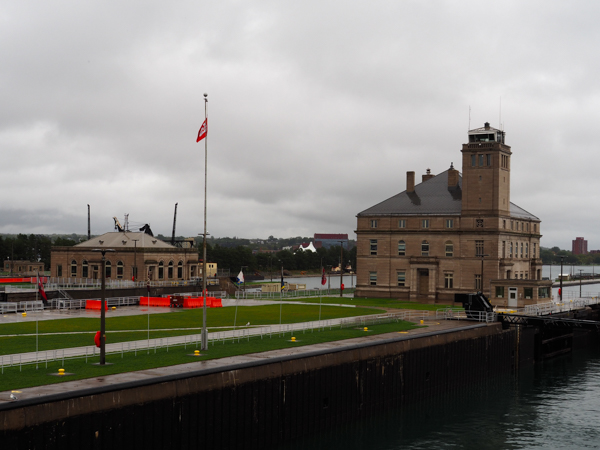 We were envious of bus #2 because they got to see ships transit the locks. By the time we got there, the day's traffic had cleared out.

A hard limestone formation, shown in this core, underlies the eastern end of Lake Superior. Unlike Niagara Falls, which has eroded a significant length of the river separating Lakes Erie and Ontario, Superior has been unable to erode the drop between it and Lake Huron/Michigan.

The name Sault Ste. (Sainte) Marie means The Rapids at St. Mary's River. The rapid required a significant portage to move goods to and from Lake Superior until the first lock was built in 1855.

The rapids still exist, but their width has been diminished by the locks on the American side and a canal on the Canadian side of the river.

Nearby is an old brick building that once housed the U.S. Weather Service station at Sault Ste. Marie. It is now the home of the Great Lakes Shipwreck Museum.

After visiting the locks we returned to St. Ignace for our ferry to Mackinac Island. Some folks took advantage of the unexpected overnight stay to visit the island on their own.