During the night we passed the eight locks of the canal and woke up in Port Colborne, Ontario. We loaded into buses for the drive back across the Niagara Peninsula to the falls. 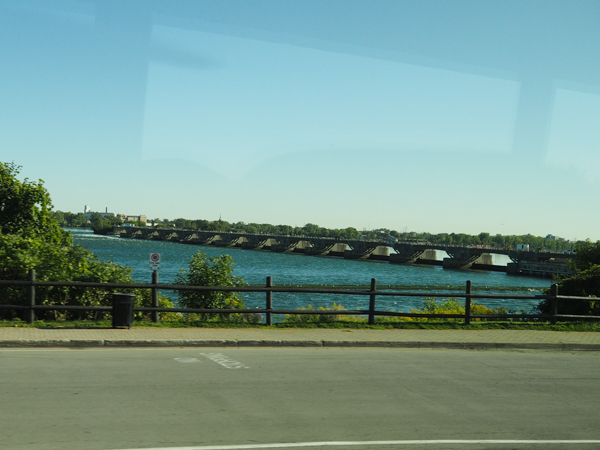 Diversions for hydro-electric power have diminished the flow over the falls. What we see now is about one-half the natural flow. Even this is diminished overnight when even more water is diverted.

Both Ontario and New York have generating stations. This diversion dam supplies plants on the Ontario side. When in use it routes water to reservoirs that feed the turbines. 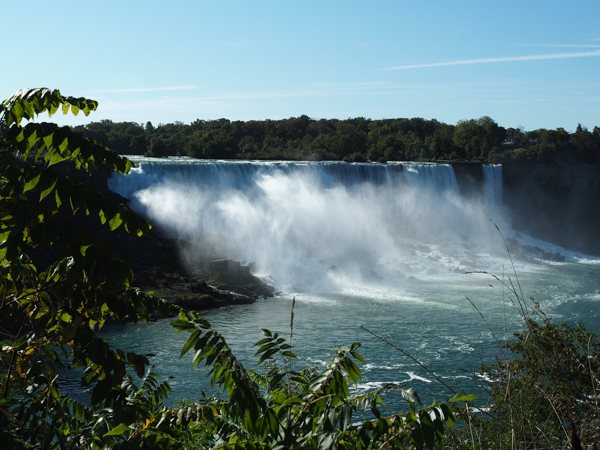 There are three main falls. The American Falls are shown here with the small Bridal Veil Falls to the right.

The rock escarpment on the American side is softer sandstone and has eroded more dramatically than the Canadian falls -- resulting in a build-up of boulders at the base of the falls. 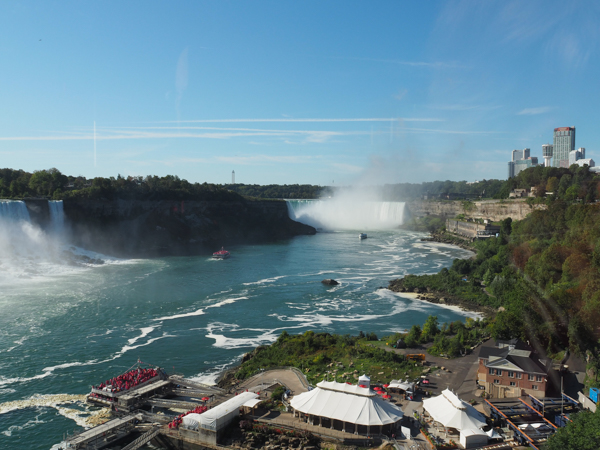 Part of our excursion was a trip on the Hornblower catamaran, shown in the lower left with the red-ponchoed passengers. The Maid of the Mist, which once had the concession for both the Canadian and American sides, still operates from New York. 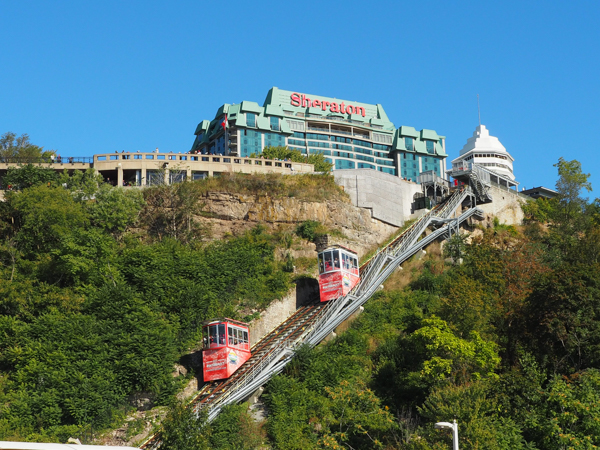 We rode down to the excursion boat on this funicular. 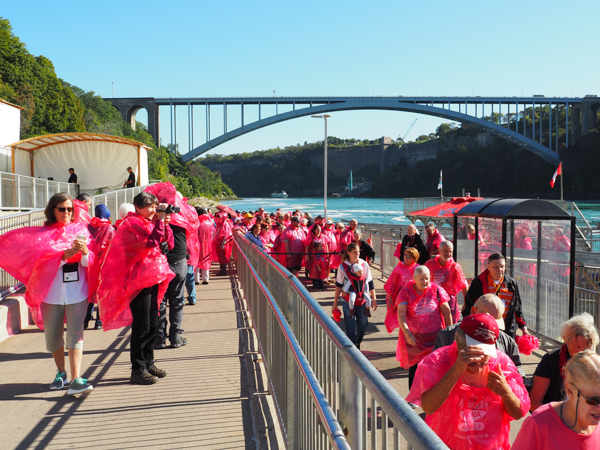 As we prepared to load our boat we were all issued stylish red plastic ponchos. Our excursion would take us right into the throat of the Canadian Horseshoe Falls and yes, we got drenched!

The ponchos worked well as far as they went. They did not, however, cover our legs below the knee, or our shoes. Jim had enough sense to ride inside and emerged dry, whereas I came off looking like a drowned rat and squished around for the next little while.

Never mind, it was fun and I'm not make of sugar so I didn't melt! 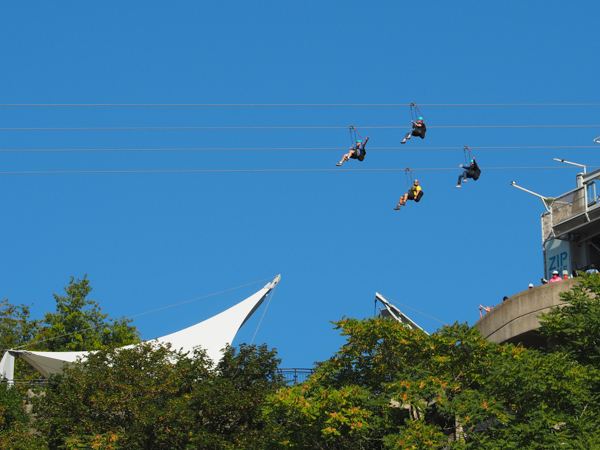 While waiting for the boat to fill up, we enjoyed watching zip-liners swoop down to the river level. 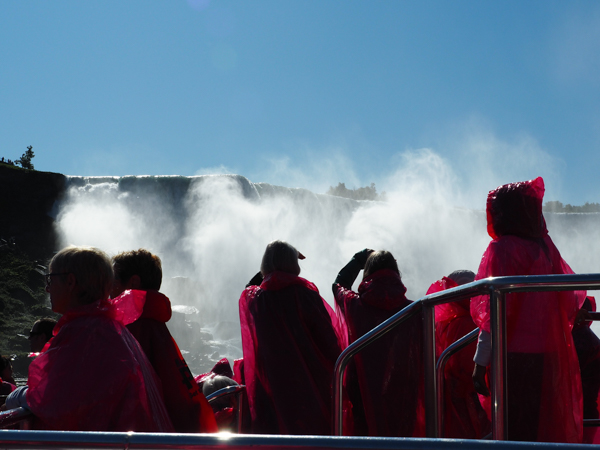 I would have been tempted to get pictures closer to the falls, at the risk of damaging my camera, if the battery hadn't died. Saved from myself! 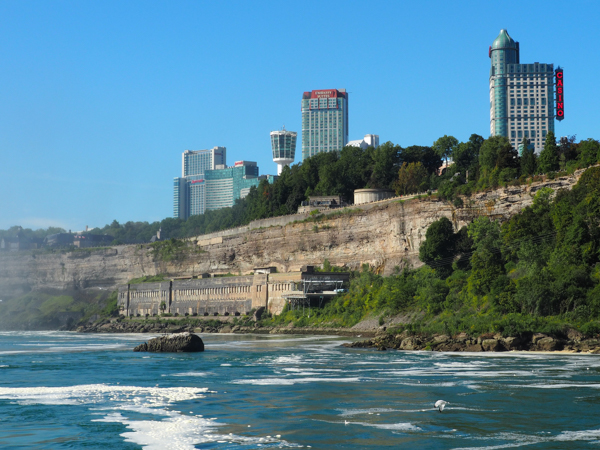 This abandoned hydro plant on the Canadian side has been replaced with others that are newer and more powerful.

The last picture from my failing battery. I didn't get a picture of the wonderful rainbows that followed us throughout.

After our adventure at the falls we proceeded down the river to an overlook of the Niagara whirlpool. The fast-flowing river has gouged out a circular eddy just before a sharp right-hand turn, shown here.

A 1916 cable car spans the river and pool at this point. Although the cable car starts and ends on the Canadian side, it crosses the US/Canadian border during its transit.

I doubt you have to take your passport since there doesn't appear to be a custom's office mid-stream. 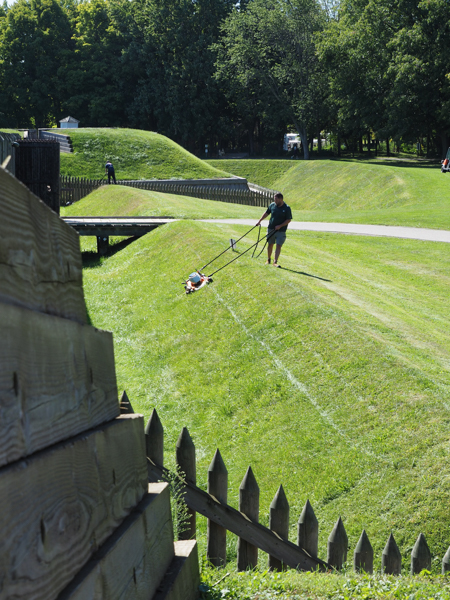 One of the early exhibits at the fort asked a question: who won the war of 1812? Who indeed? I'm not going to go there, but will just show what we saw.

The ditch surrounding the palisade was never a moat. Modern maintenance tools make it easier to keep it clear of brush and other growth that could shelter attacking soldiers. Having ridden tractors on similarly steep slopes, I was happy to see the staff taking a much safer approach. 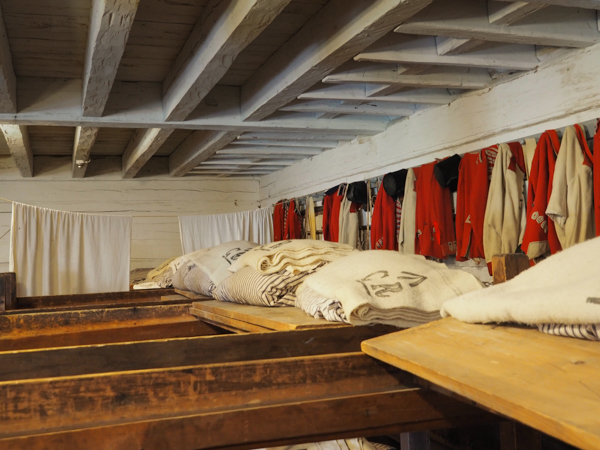 The blockhouses at the site had many uses. This one was configured as a residence for enlisted men.

Some of the men were lucky enough to have their wives and families accompany them on their (minimum) seven-year assignments. The only concession to married life was the curtain screening their beds.

Single men had bunk buds that had to be "put away" every day. The only storage for clothing was the pegs along the wall. I suspect VMI cadets today can relate to this. 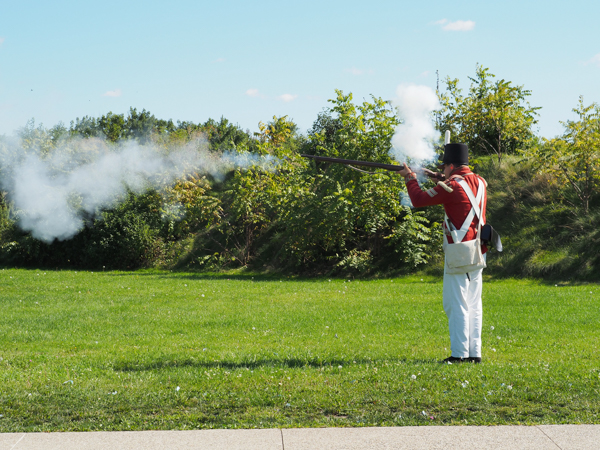 One of the docents demonstrated musket usage of the time. Musketeers drilled in the multi-stage firing of this weapon until they could get off one shot every 15 seconds!

The process of loading and firing was cumbersome. Click to see a description that mostly matches what we were told.

Since muskets are inaccurate, firing was done in ranks. A line of soldiers fired and then retreated to reload while another rank came forward to fire. The smoke builds up over the battlefield. Soldiers wore brightly colored uniforms to stand out to their own side and minimize the potential of being killed by "friendly" fire. 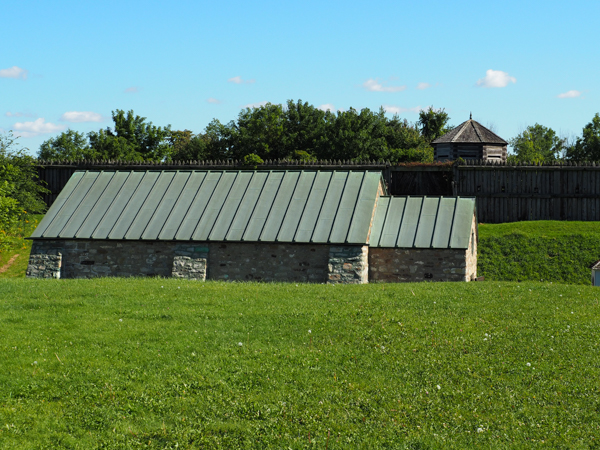 The powder magazine is the only original structure on the site. It was tucked behind a large berm to protect it from enemy fire and was strongly built of stone. 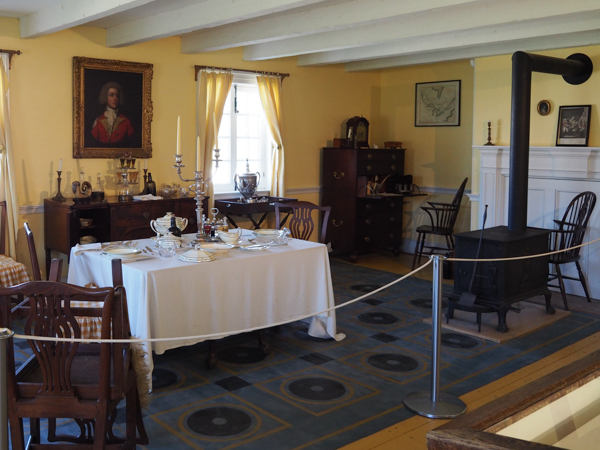 Unlike the enlisted dormitories seen above, officers had much more gracious quarters. 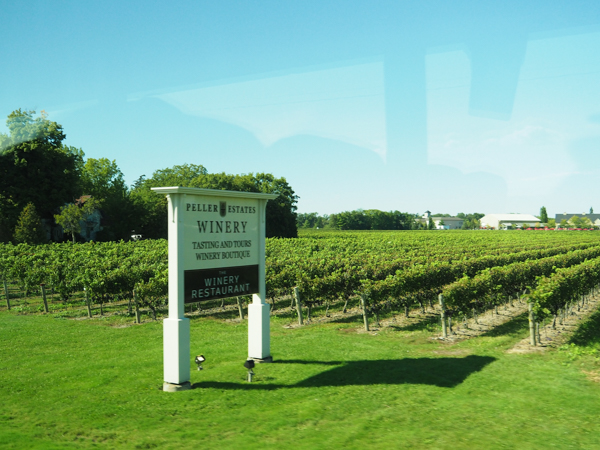 The Niagara peninsula has a mild microclimate and fertile soils. In the past the area produced fruits such as apples and peaches. Nowadays it is much more profitable to produce grapes. Wineries have proliferated. We were sorry that there was no opportunity to stop and sample their wares, but we passed many on the bus. 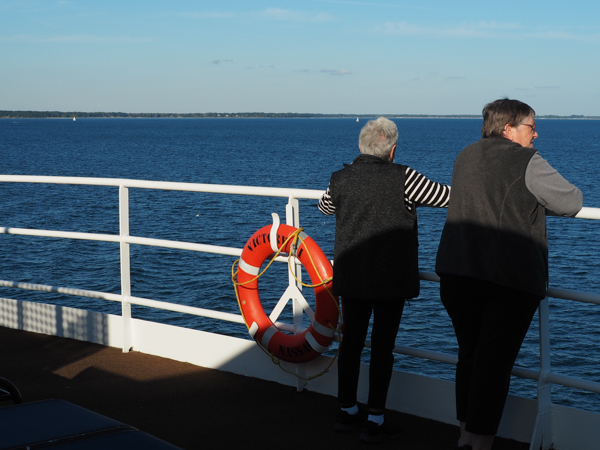 We were now exploring our second of the five Great Lakes: Lake Erie.

By the next morning, we would have traversed much of its length to return to the US and arrive in Cleveland, OH.