Toronto is located on Lake Ontario, the first of the five lakes we will visit. Although it is the smallest of the Great Lakes in surface it exceeds Lake Erie in volume. Its outlet is the St. Lawrence River.

We set out with a local expert on a field trip via motor coach to see and learn about significant areas of Toronto. Following lunch we enjoyed a docent-led exploration of the Royal Ontario Museum. It is among the world's leading museums of natural history and world cultures.

After the museum we proceeded to our ship for some time to unpack and settle in before supper.

I didn't get any pictures during the bus tour. We stopped for lunch on the border of "Old" Toronto and the Financial District.

The Gooderham Building is a contemporary of the New York City Flatiron Building and has the same nickname. 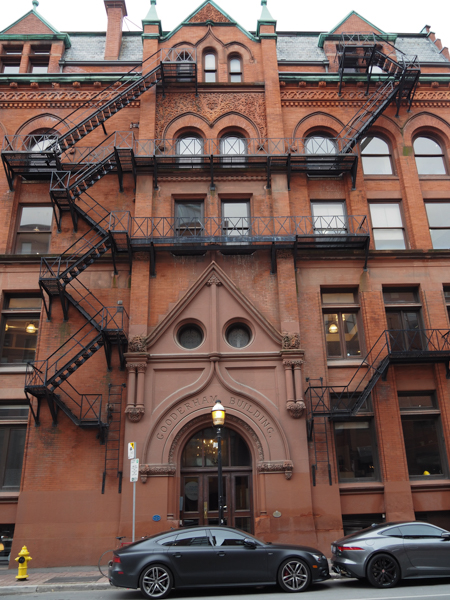 The fire escapes on the building made a great design with the elaborate entryway. 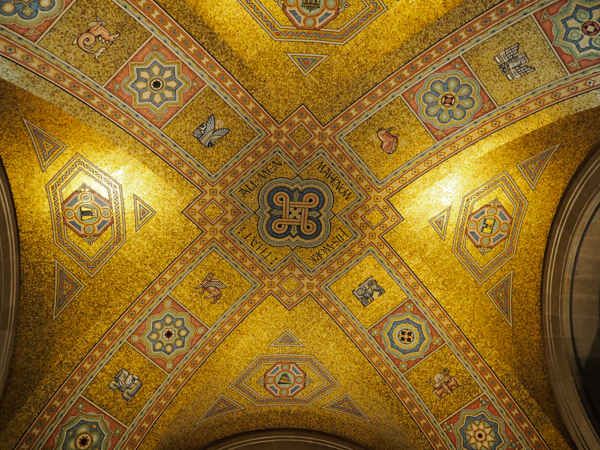 The Royal Ontario Museum was as impressive as we had expected.

The building was constructed in three phases: 1912, enlarged in 1931, and the latest addition in 2007. This mosaic ceiling was in the second phase.

The dedication on the outside was twofold: 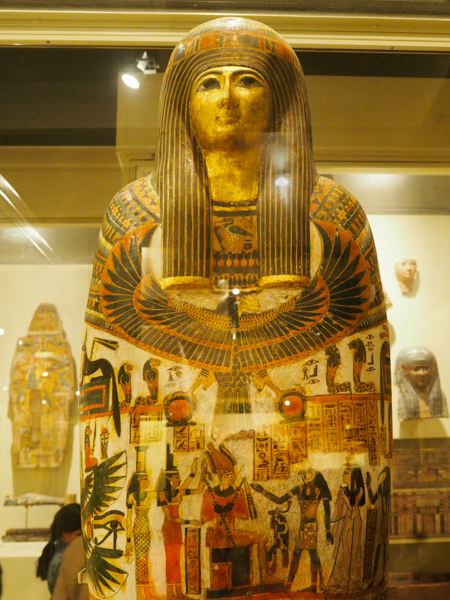 Our guide took us to the various sections of the museum. One of the arts of man was this elaborately decorated mummy case. It contains the remains of a woman named Djed-maat-es-ankh. Her history and lineage is inscribed on the outside. The case has never been opened, but various imaging techniques have revealed much about her. For instance, she died from dental disease! The images showed multiple tooth abscesses, one of which had ruptured possibly causing fatal blood poisoning.

The facial features of the case are not an attempt to reproduce the face of the deceased -- they are standard depictions. Projections based on the facial structures of the contents, however, show that she was indeed beautiful.

Canopic jars displayed with the case contain the organs that were removed during the embalming process.

We also saw mummies of domestic animals such as cats and falcons. 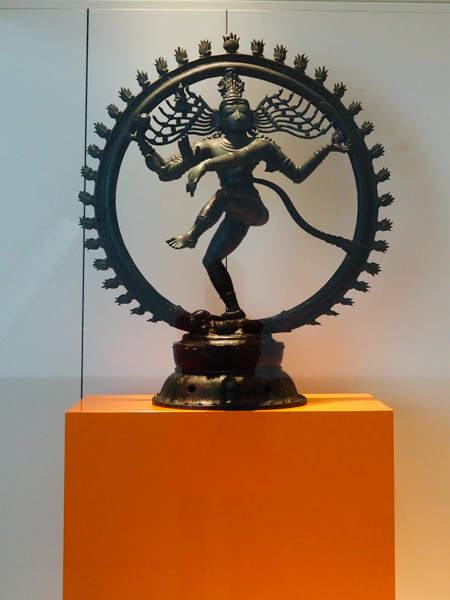 The bronze image of Shiva as Lord of the Dance dates from the 12th-14th century. Each piece of the sculpture has symbolic meaning. Details are at the link. 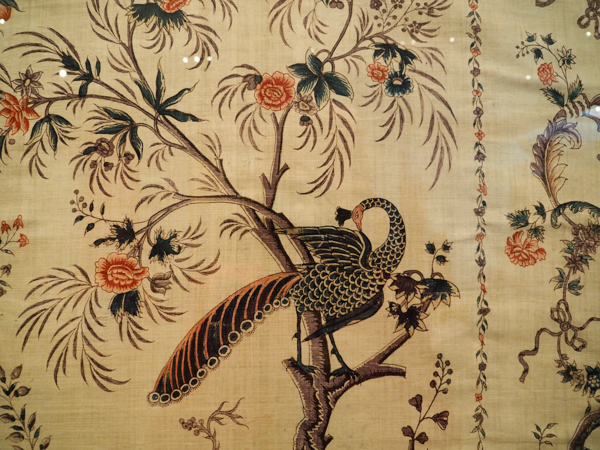 This detail of an 18th century wall-hanging from India shows the vibrant colors of the painted and dyed decoration. I wish they had included a description of how the cotton textile had been stored over the years to prevent fading. 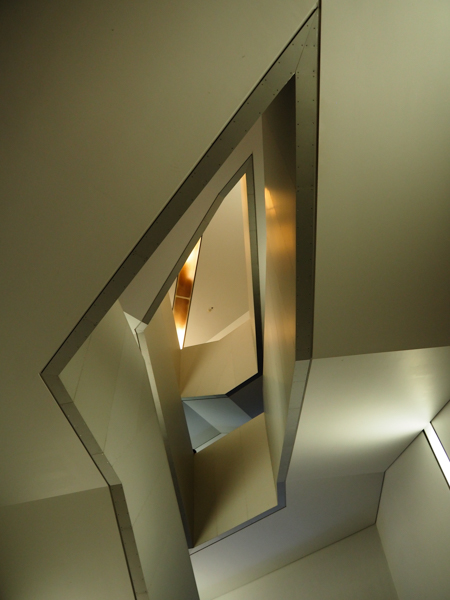 Daniel Libeskind designed the 2007 addition nicknamed The Crystal. It's the kind of structure you either love or hate. We are not fans of the exterior, which clashes with the older neo-classical structure, but the interior galleries were well designed and accessible.

There was similar controversy over a never-built Frank Gehry addition to the Corcoran Gallery in Washington, DC. 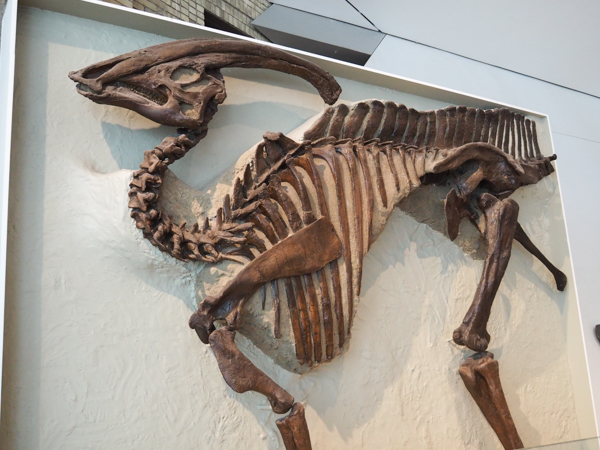 Nature was well represented by a large dinosaur and mineral collection.

This Parasaurolophus walkeri dinosaur is a favorite son (or daughter) discovered in Alberta by a team from the University of Toronto.

The head and some other bones in the display are casts of the real bones, which are preserved elsewhere for study.

The tail and several leg bones were missing when the specimen was uncovered. 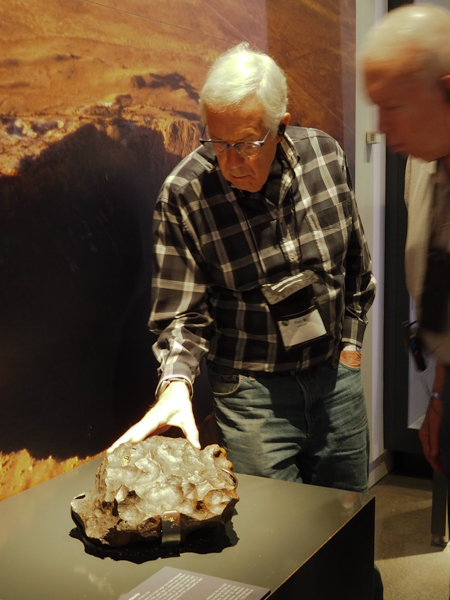 This meteor fragment was recovered from a crater in Arizona. It was pretty cool to touch a fragment of outer space.

We saw much more of the museum than can be described here and we only saw a fraction of what was available. It is worth a much longer visit. 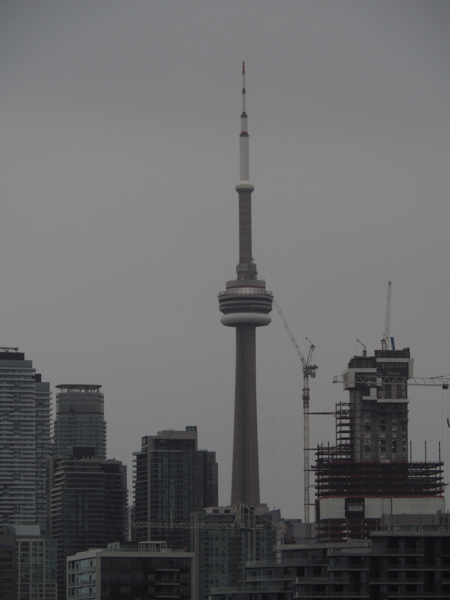 The CN Tower dominates the city. When I visited Toronto back in the 1970s I went to the top, but we had no such opportunity on this trip. 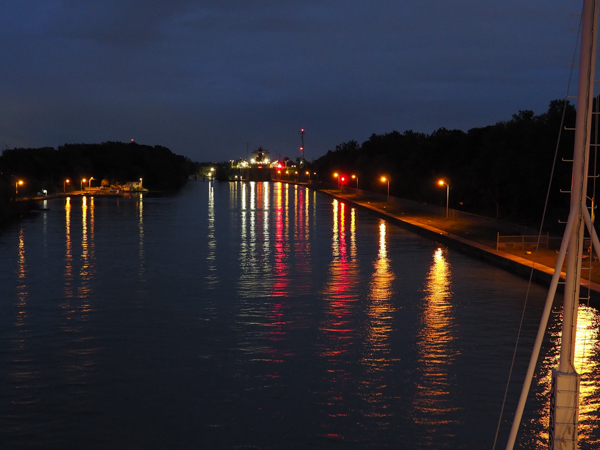 We left Toronto earlier than anticipated in hopes of beating a large laker to the Welland Canal. We didn't, so we had to tie up for a while until we could pass through the first lock. It was almost dark, but I was able to get a few pictures.

We had hoped to pass more of the canal in the light. Throughout the night I woke up to see dark lock walls outside the window. 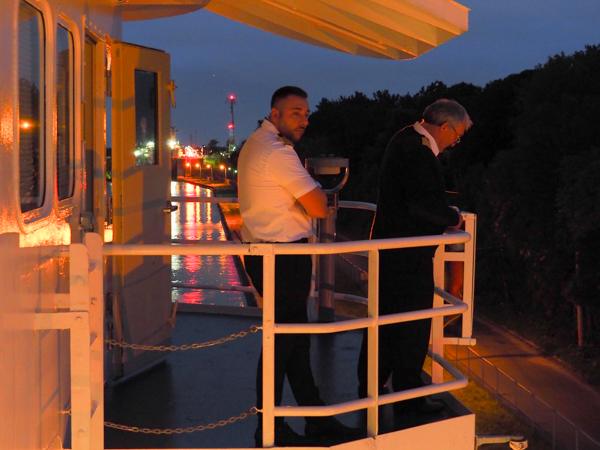 As we tied up alongside the canal to wait, the captain called out very precise instructions for the front and rear thrusters, and for moving forward and back. I was impressed at how accurately the crew and ship responded to the commands. If he asked for six inches from the rear thrusters, the rear of the ship moved six inches! If he asked to move ahead one meter, the ship moved one meter ahead.

Later we learned that all ocean-going or foreign-flagged ships such as ours traversing the Great Lakes are required to have a pilot on board at all times. The implementation of this requirement is controversial and expensive and may have contributed to the decline of Great Lakes shipping.

There are ships, "salties," that regularly run between ports in Europe and ports on the Lakes. 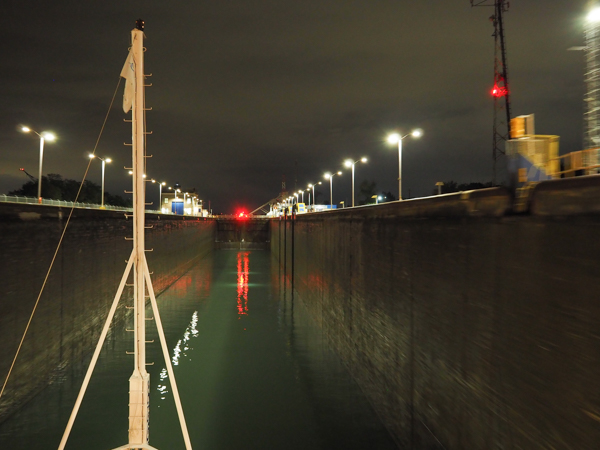 We are entering the lock. The size of the locks limits the size of the ships that can travel between lakes Erie and Ontario and in turn to the open ocean.

There are three connections between the Great Lakes and the rest of the world:

At one time there was an additional canal considered that would have connected Georgian Bay in Lake Huron directly to the St. Lawrence River at Montreal. It was never completed.

Until the construction of the canals, including the Welland Canal bypassing Niagara, migration of alien species into the lakes was strictly limited. Since then there have been multiple invasions with negative consequences not only to the ecosystems but to commercial fisheries.