I had worked at the Region 15 Arabian Horse Championship the week before Strathgheny. No need to go into detail, but it was hot and exhausting. I was concerned that I would be too tired to make the drive all the way to New Wilmington in one day. So I left early and made record time! Since I arrived before registration started, I had the opportunity to walk around campus taking pictures. 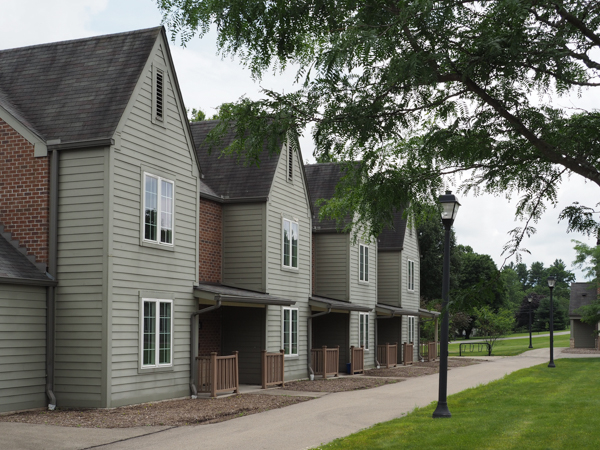 Unlike the shared and un-air-conditioned rooms at Valle Crucis where Jink & Diddle is held, Westminster College puts us up in 4-bedroom townhouses. A private room is the height of luxury! 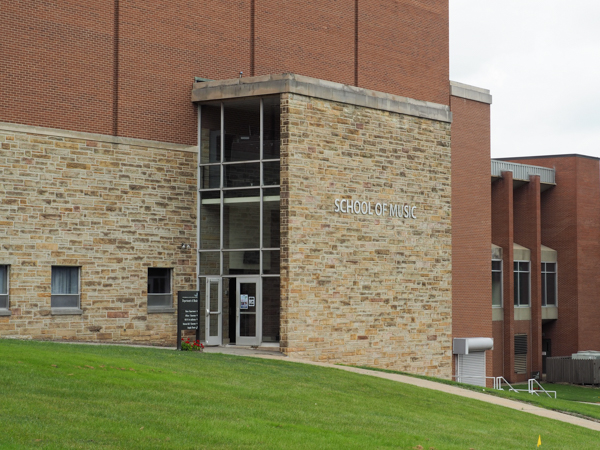 Another center of gravity for our week is the School of Music. We had the entire area to ourselves for classrooms, practice areas, and a mini-violin shop set up by J.R. Judd, who comes every year to repair instruments and entice us to upgrade to better ones.

Since I use my father's violin I have no desire to replace it, but I enthusiastically "accessorize" it. This year I purchased a new carbon fiber bow. Plus David recommended that I get the string spacing narrowed a bit. Since I was going to do that, I also opted to get the bridge replaced. Now I have to retrain my muscles! 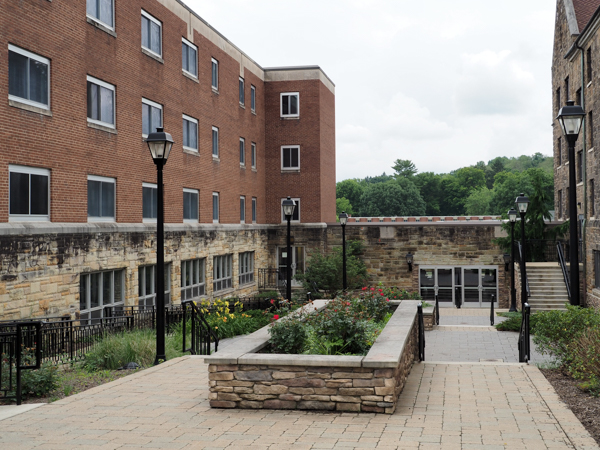 Of course a major focal point of our week on campus was the Duff Dining Hall. The doors at the end of the walk were our way in. The cafeteria and dining area were behind the ground floor windows on the left.

Our concerts took place in the open-air Amphitheater on the shores of Brittain Lake. Melinda & David, accompanied by Melinda's husband Dan, presented the instructors' concert on Monday evening. Our entire group got together for the final concert on Friday evening. 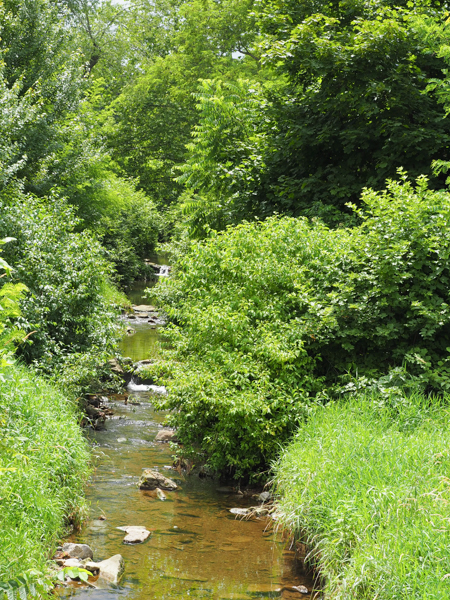 McClure Run separates the residential portion of campus from the dining area and music school. We walked or drove across it multiple times each day. We also named the 2019 Strathgheny tune after it!

Every year the group composes a tune -- usually of the type featured by the Scottish F.I.R.E. composition competition. This year the featured tune type was the air. Multiple people contribute to the tune -- a note or perhaps a measure. Or in my case, a title!

The run was once barren and lifeless, but students in cooperation with the grounds crew revised and revegetated it as part of a riparian restoration project. It is now protected and shaded by native plants and provides a home for fish and other creatures including - yes - the occasional snake. I hear that not everyone is thrilled with the change, but I find it lovely. 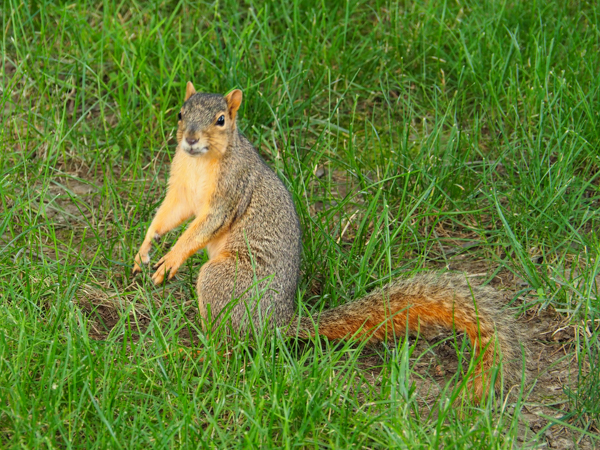 This fox squirrel was foraging on campus as I walked around. I have not seen his relations in Virginia where the gray squirrel is more common. 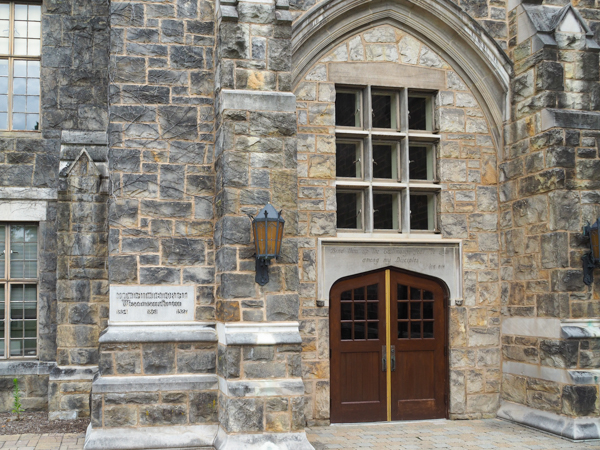 At the time it was founded in 1857, Westminster College, favored traditional Gothic revival stone architecture. The "Old Main" building has a tower with Westminster chimes (natch) marking the quarter hours. At noon a Carillion gave a concert.

One year our concert was held on the terrace by Old Main. Although picturesque, it was not otherwise a felicitous location so I'm glad that it's been moved to the amphitheatre. 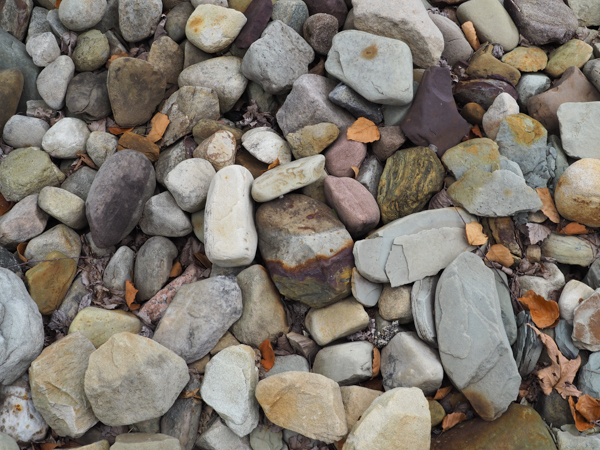 Many areas throughout the campus are surfaced with stone rather than grass. I had a nice chat with the head groundskeeper who told me that the entire campus was maintained with a crew of four! Low-maintenance areas like these and the natural riparian buffer around McClure Run help make that possible. 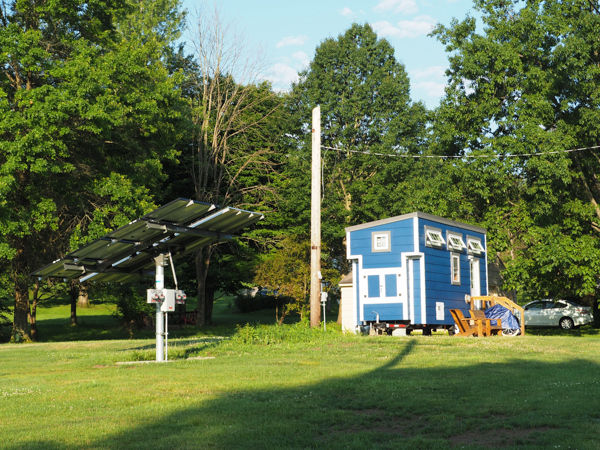 An experiment in sustainable housing was located across the street from our townhouses. This tiny house may become the prototype for a development of similar houses. It gets much of its power from the solar panels and uses a composting toilet for wastes. The groundskeeper told me that there was at one time a thought of collecting water from the roof, but that has not been implemented.

There are a couple of students living in this house. At various times they welcomed visitors to look around, but I didn't take that opportunity.