The next morning we were in Helsinki.

Our program called it an "orientation driving tour around Helsinki." It was a driving tour for sure, but it left us feeling rather DISoriented! My head was spinning by the end.

The best part was stopping at the monument to Jean Sibelius. His music promoted a Finnish national identity as the country struggled for independence from Russia. Almost everyone is familiar with Finlandia. Check out this YouTube video -- the images that go with it are breathtaking. It will open in a new tab. Watch it full screen.

We didn't see any of that scenery.

The design of the monument was controversial at the time, but it is now a must-see.

We are posing with the front page of our local paper, the Lexington News-Gazette. It collects and publishes vacation photos submitted by subscribers. 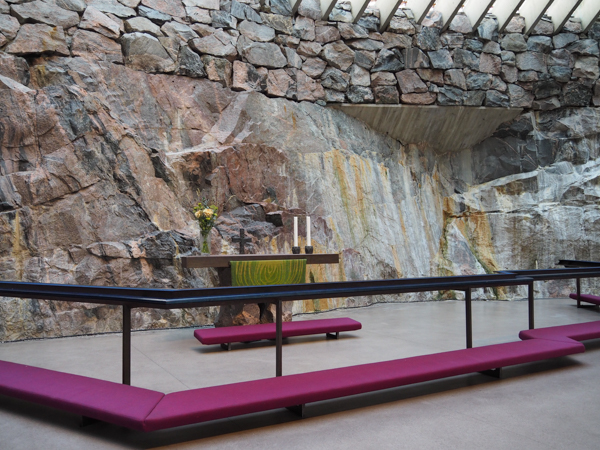 One memorable stop on our tour was the Temppeliaukio Church in downtown Helsinki. It is carved out of rock with a copper dome roof. 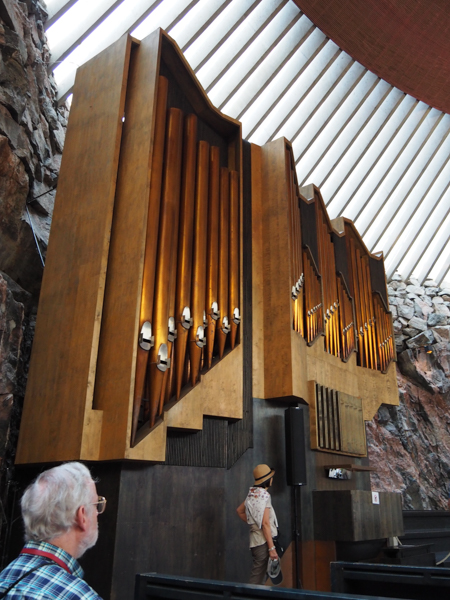 There was a young woman playing the piano during our visit. The church has excellent acoustics and is often used for concerts. I would have liked to hear the organ. 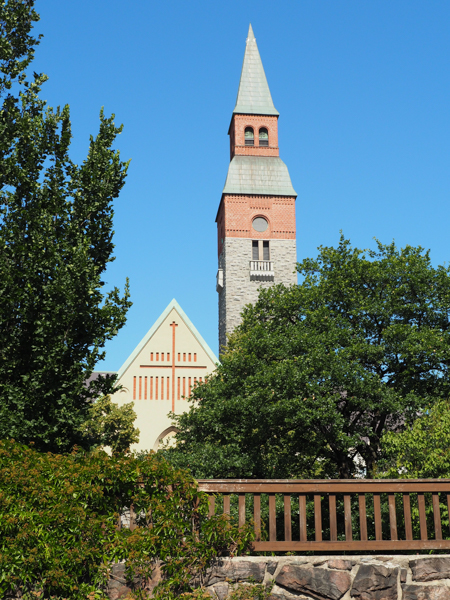 Our next stop was the National Museum of Finland.

The building was designed by Eliel Saarinen and others. He is the father of Eero Saarinen who designed Dulles International Airport and the St. Louis Gateway Arch among other works. 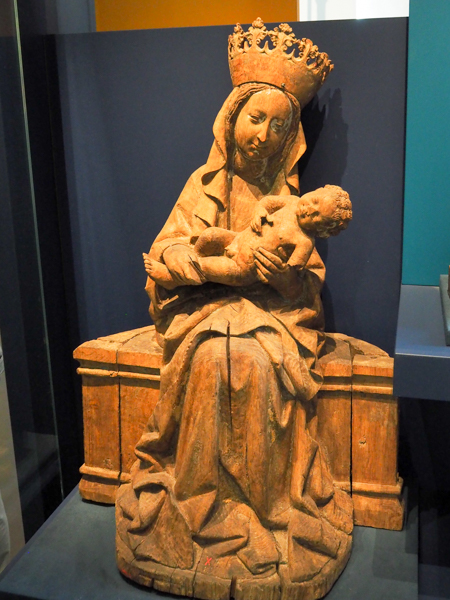 We started the guided museum tour, but soon punked out. I was at the end of my rope on slow meanderings through museums. I did enjoy the exhibit on medieval church art -- especially wood carving.

Most of the wooden sculpture on display dates from the 14th-15th centuries. This Madonna and child is probably from the latter part of that time as it is moving away from an extremely stylized presentation. 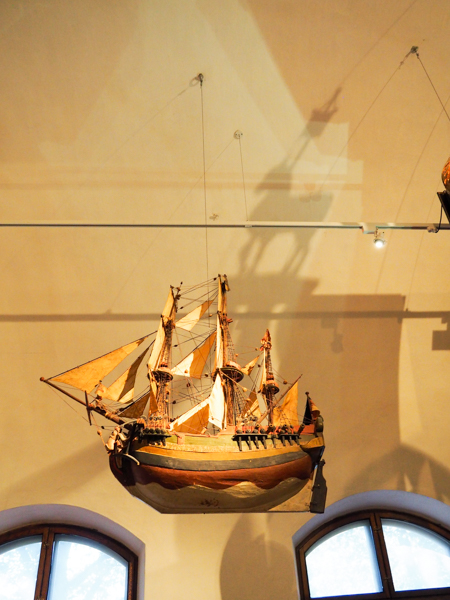 I liked this votive ship.

I also liked the reflections in the background. 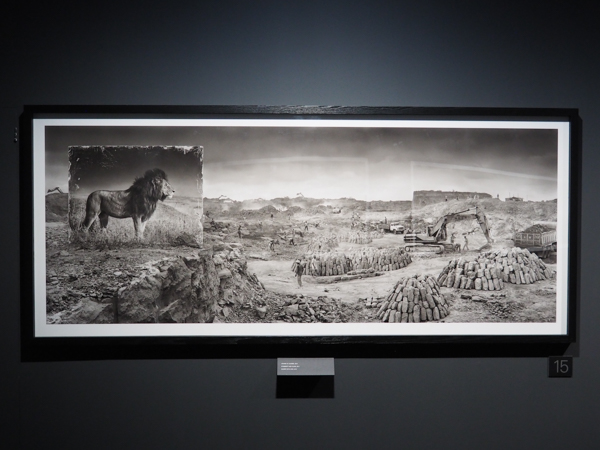 After walking backwards through the medieval section, we visited a temporary exhibit at the museum called Inherit the Dust by photographer Nick Brandt. This photograph is called "Quarry with Lion."

The photos, separate from how and why they were created, lose much of their impact. There is a short video that should be seen before viewing the exhibit (link opens in new tab).

After our time at the museum, we drove to Senate Square, dominated by the Lutheran Helsinki Cathedral. The square was within walking distance of our ship and I was looking forward to escaping from the slow-moving group and seeing some sights on my own. I came back to see the inside of the cathedral later.

The main entrance to the cathedral is NOT up the dozens of steps, it is from the street-level plaza on the left. 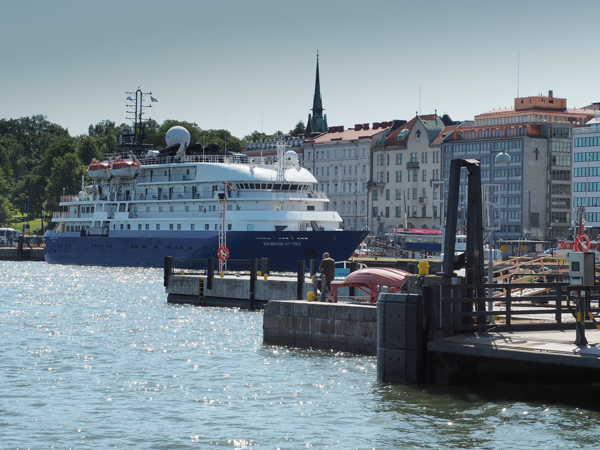 As usual our ship was docked right downtown. 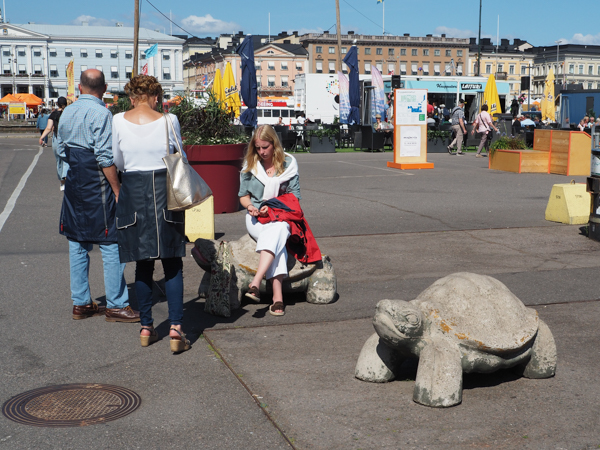 After returning to the ship for lunch, I decided to head out for an afternoon on my own. It was a chance to WALK instead of stroll!

Beside the harbor I encountered the last set of animalistic barriers. Finland favors turtles. 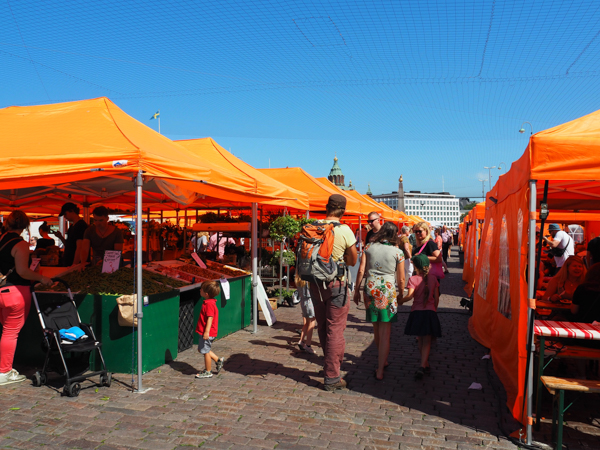 Also at the harbor this vibrant street market attracts tourists and locals alike. I bought a colorful pair of hand-knitted socks and had a nice chat with the knitter.

Fresh produce and cafes were intermixed with clothing and tchotchke stands. 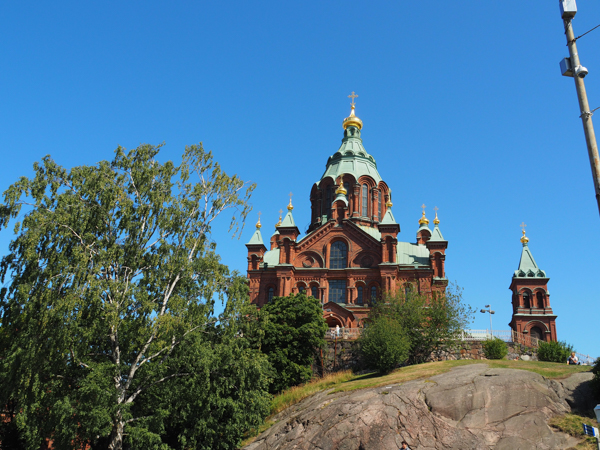 This Orthodox church, Uspenski Cathedral, was visible from the ship. It seemed as good an initial destination as any for my walk. I chose not to go in because there were several other places I wanted to visit and time was limited. 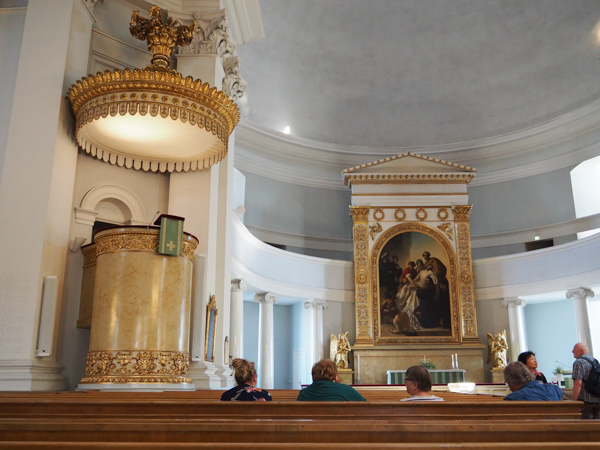 I returned to the Helsinki Cathedral because I wanted to see the interior. Although the church was constructed in the first half of the 19th century, the interior has a spare modern look.

The altarpiece was a gift of Nicholas I of Russia. At the time Finland was a Russian Grand Duchy. 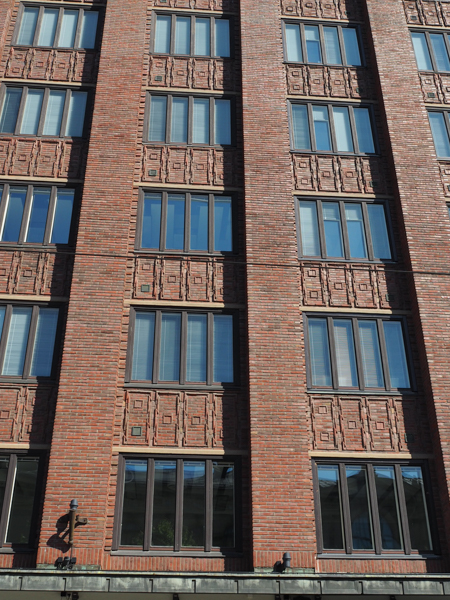 The primary thing I remembered from the whirlwind tour of the morning was the variety of brickwork on buildings old and new. I was hoping that I would pass some of them on my afternoon walk, but this was the best I found. 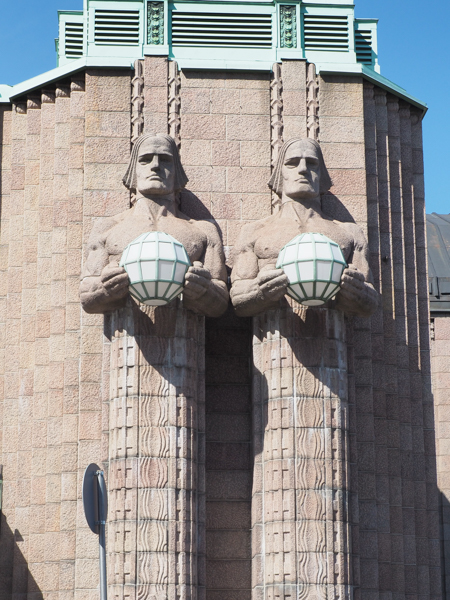 My goal was the central railway station also designed by Eliel Saarinen. I wasn't able to get a picture of the entire station, but it can be seen at the link.

These are two of a pair of monumental statues on either side of the main entrance. They are called the "lantern holders," but in 2017 they were adorned with painted masks in celebration of a concert by the rock band Kiss. Ya gotta like a place that doesn't take itself too seriously -- at least not all the time. 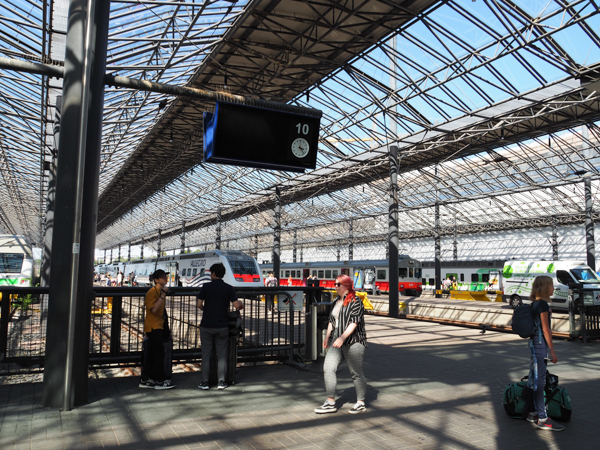 The interior of the station didn't lend itself to pictures, but the train shed roof was fabulous.

There was a Burger King off the station concourse that must have the snazziest digs of any burger joint in the world! 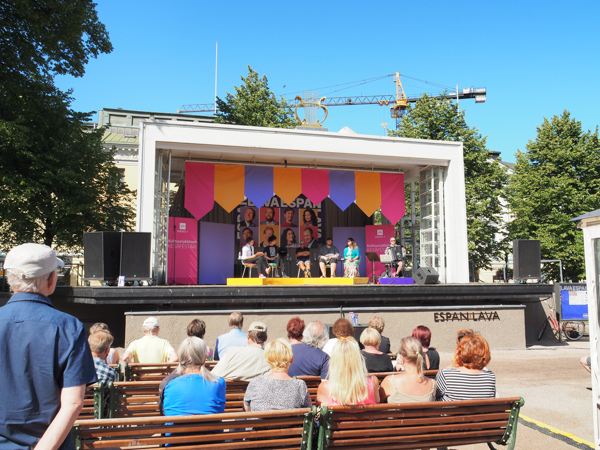 It was time for me to hoof it back to the ship, but I charted a path through Esplanade Park. The outdoor stage often hosts music programs, but this afternoon it seemed to be a roundtable discussion of some sort.

For what it's worth, the writing on the pink panels says "Culture of Unity" and "Summer Festival" (thanks, Google translate).

The audience was attentive. 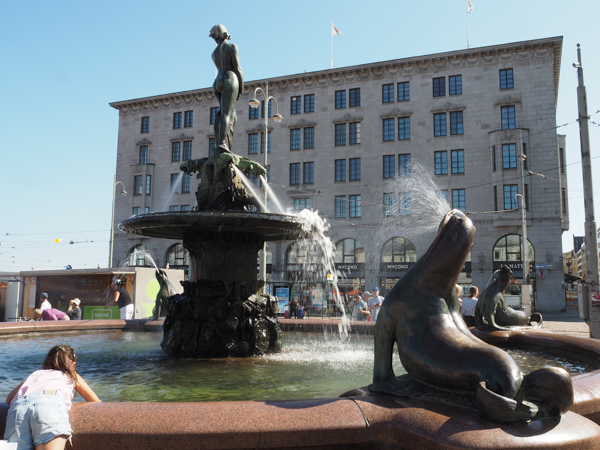 At the junction of the esplanade and the market square adjacent to the harbor, this fountain attracted lots of children.

I watched them for a while and was amused watching an older man and small boy playing. The man was trying to place the boy on the back of one of the sea lions like a rocking horse. The child wasn't convinced and soon his mom came rushing up and snatched him away. I suspect granddad was just having fun and mom had visions of the child drowning. The family was soon joined by a small girl. Mom kept a good grip on both children thereafter. 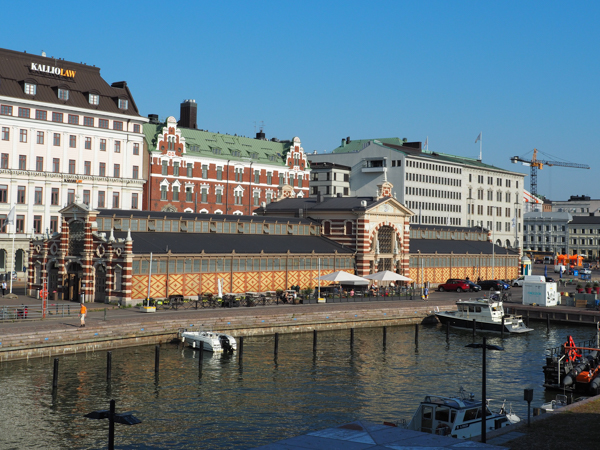 The Old Market Hall has served Helsinki since 1889. It was just beside the ship as it was docked. 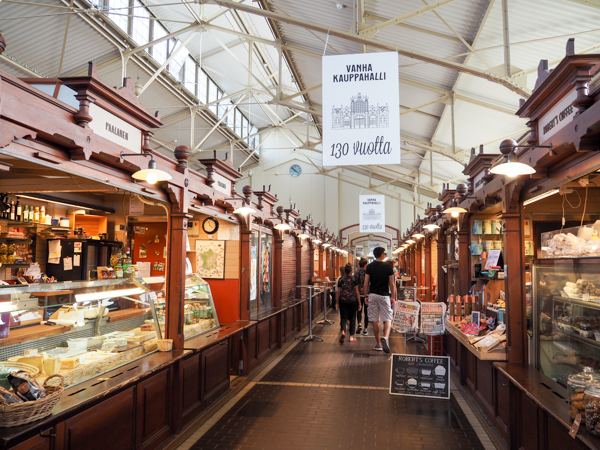 As I returned to the ship, I walked through the market hall. There was a little bit of everything. I would have been tempted by the ice cream vendors if I hadn't been stuffing myself on the ship for over a week!

Helsinki would be worth a much longer (and more leisurely) visit. There was a lot more to see. 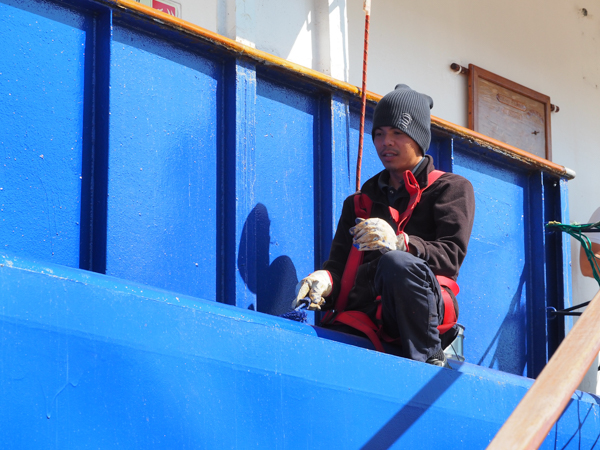 I am always impressed about the constant maintenance work that goes on around a ship. On every cruise we have seen the seamen painting, washing, varnishing, and generally swabbing the decks. This one was no exception. 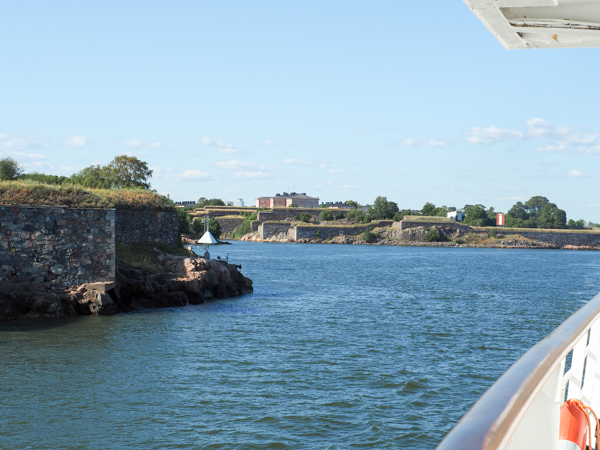 As in Stockholm we threaded our way through many outlying islands as we left port.

The fortress of Suomenlinna is located on several islands just outside the harbor. Had we more time I would have hopped a ferry out to explore as it is a World Heritage Site in its own right.

As we sailed away from Helsinki, we had another lecture by Professor Weiner. The topic was "The KGB in the Baltic Republics."

Why do we care about this organization that no longer exists?

Putin and much (est. 25%) of his leadership team came from the KGB. Add in former Soviet military personnel and the figure approaches 80%. The Soviet state once had a security service. Now the security service has a state.

The KBG selected and vetted people from all disciplines. Recruits agreed to serve for a variety of reasons. Some, e.g., Putin, were attracted by the "James Bond" image. Some wanted a ticket out of the provinces. Some wanted advanced education. If you were successful, you became part of the elite with access to special perks.

Almost all were men.

What were their methods?

They were professional liars. They are still liars for the most part. Memoirs cannot be trusted. If challenged, they will deny everything. "No one holds the modern church accountable for the Inquisition."

They view themselves positively – we were not the Gestapo or Stalin’s goons. Many are bitter about what they perceive as betrayal by their leadership.

Their focus was prevention – not putting people in jail. They were not "thought police" – they cared only about actions. If someone was a concern, they had a chat to "warn" them. If that didn’t work, they would bring in the family and other associates – "we are concerned about you." People were given a chance to "confess" and sell out others. Virtually all complied – and wondered who sold them out. Arrests dropped, but terror and distrust reigned. A very effective tool.

Disinformation was used both inside and outside the country: election interference, anti-Semitic messages in Germany, blaming AIDS on the US, smearing dissidents.