The reading for our first trip to St. Petersburg referenced Tsarskoye Selo as a place of much interest. OK, our interest was piqued, but we didn't get to see it then. We didn't think we would on this trip either. Then we learned that "Pushkin Village," the location of the excursion to the Catherine Palace, was its post-revolutionary name. The area was one of the few "high spots" safe from the Neva River's frequent floods. Peter the Great selected it as the location of a country retreat. 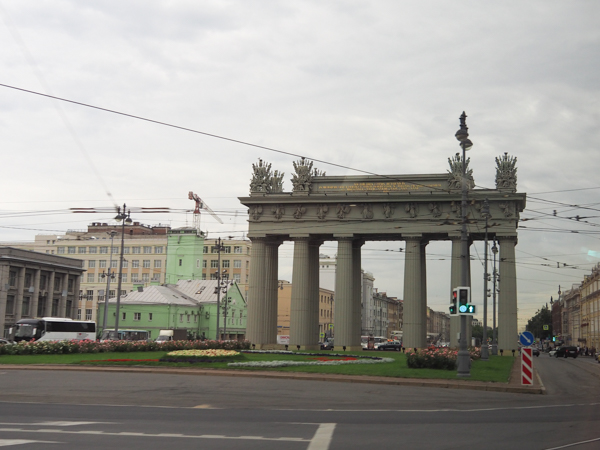 The road to Pushkin is also the main road to Moscow. We passed the triumphal gate first completed in 1838 -- of cast iron. The gate was dismantled for eventual relocation to Moscow after Stalin gained power, but WWII intervened. The defenders of Leningrad/St. Petersburg pressed the pieces into service as an anti-tank barrier.

After WWII, the gate was restored and erected in its original position. 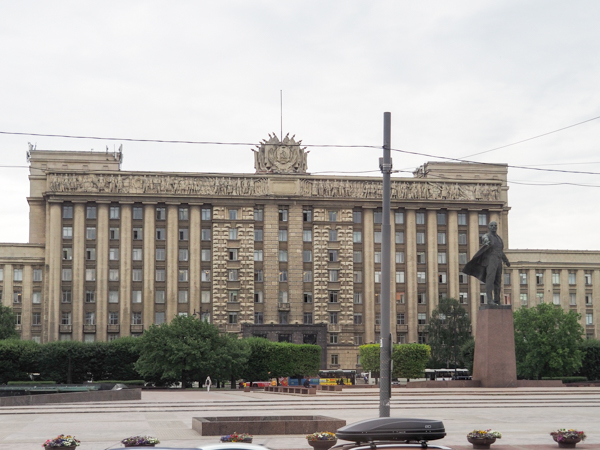 We whizzed past the House of Soviets with its large statue of Lenin.

The builders intended the structure to be the central administrative center of Leningrad, but it was completed just before WWII and used as a command post for the Red Army instead. After the war various agencies have used it, but it never became what it was designed to be.

This was the type of architecture that Stalin loved. We passed a good bit of it in this area south of the city.

We arrived at the Catherine Palace in time for our scheduled entry. There were lines everywhere, but our group was very close to the front.

We passed various musicians entertaining folks in line. This group had set up immediately outside the palace gates. The little girl was fascinated by them and danced along until her papa scooped her up. When the band began a waltz, a couple of women began a ballroom dance to the applause and joy of the crowd.

We may have to wait a short time for our entry, but we were not bored! 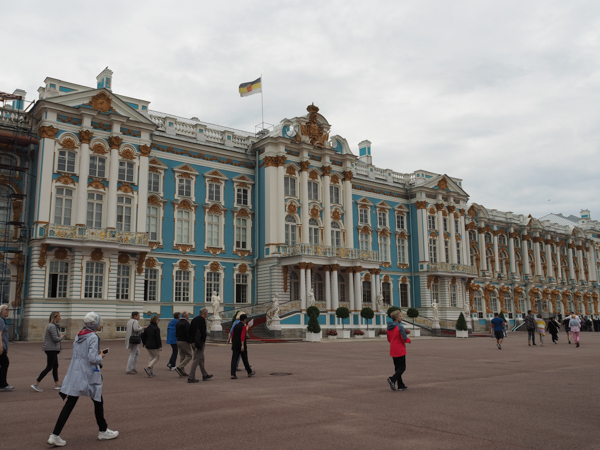 When the gates opened we joined the stampede toward the entry portal. 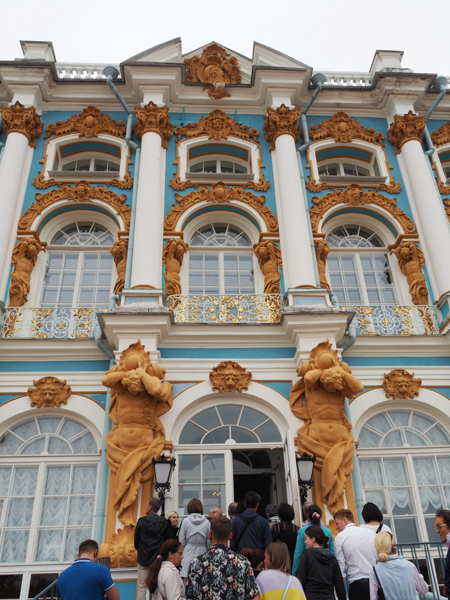 The entrance to the palace.

Although the palace is called "Catherine" because the first palace at the location was built by Catherine I, her daughter Elizabeth I commissioned the current palace.

The "golden" color was once gold leaf. The effect was dismissed at the time by the French ambassador of the time as a "jewelry box." When Catherine II ascended the throne she was appalled by that extravagance. Set aside the initial expense, the gold leaf turned out to deteriorate quickly in this harsh climate. She ordered gold paint instead.

After Catherine II's death, the palace fell into disuse by the tsars in favor of another palace in the neighborhood. 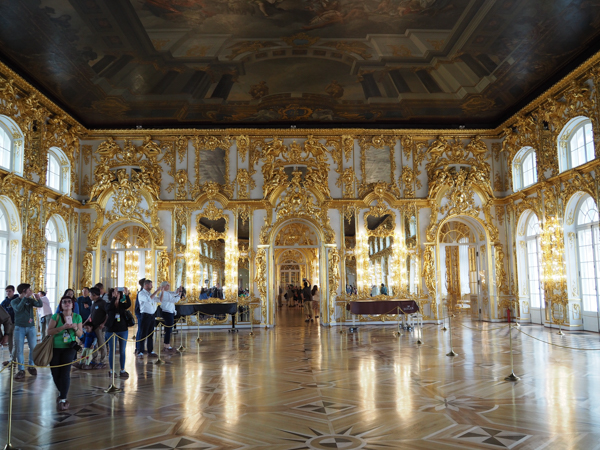 As they were retreating after the Siege of Leningrad, the Germans destroyed the palace interiors and left a large bomb to level the entire structure, but it was a dud. Soviet archivists had documented the interiors well enough to enable restoration.

The grand ballroom is the location of a lavish annual New Year's Eve celebration. Several tour groups include entrance. If you want to celebrate like the doomed Russian nobility, search on "new year's celebration Catherine palace" for a variety of offerings.

Various structures on the palace grounds are available to rent for the ultimate destination wedding.

The ceiling painting is one of the few original pieces. During Catherine's lifetime she had it removed and replaced with something more to her taste. Restorers found it in a warehouse and were able to conserve and install it. 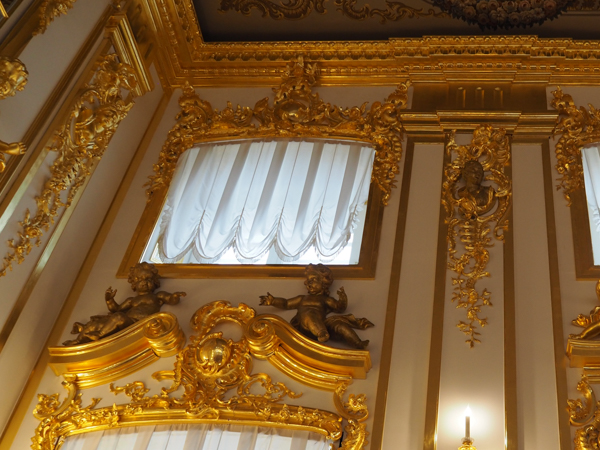 Three original features, two putti and a bust, also survived the destruction. Restorers used them to guide them in detailed reconstruction. They have been left a dark color to mark them as originals. 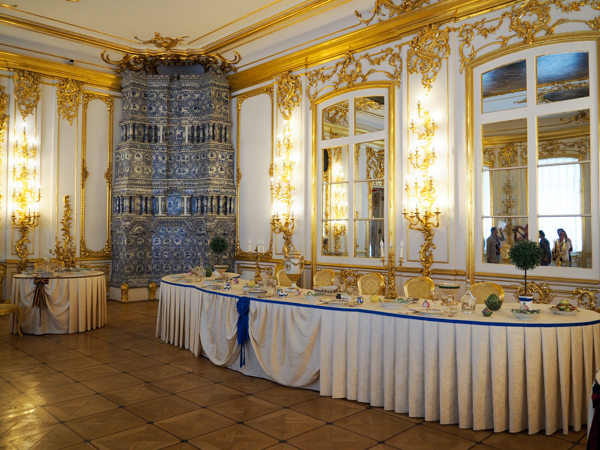 There were several dining rooms in the palace -- all different. This one is the Cavaliers' Dining Hall. Each room had one or more of the large blue-and-white tile faced stoves for heat.

We were visiting on a toasty summer day. I can only imagine what a typical 18th century Russian winter evening would be like.

Our guide said that Catherine herself would sit at the small private table when entertaining her courtiers. 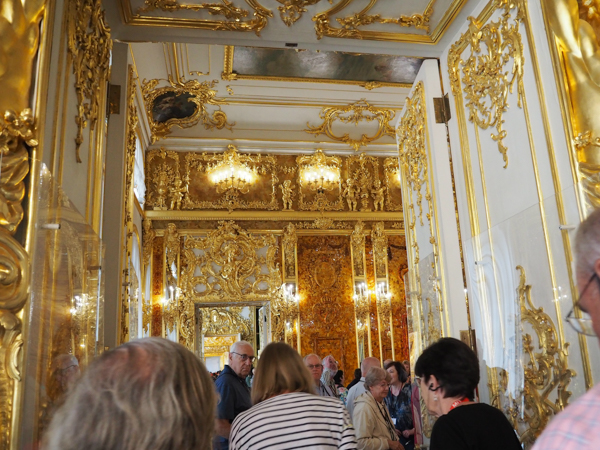 No pictures were allowed in the famous amber room even though it is, like everything else, a reproduction. This was the best I could do and when a guard saw me even taking a picture like this I received a stern lecture. At least she didn't confiscate my camera!

Our guide said that this room was the major attraction for the hordes of Chinese tourists visiting the palace as they believe it to have healing and spiritual properties.

Around the time of our visit, treasure hunters claimed that they may have discovered the hiding place of the original amber panels. Other hopefuls have been disappointed. I expect these will be too.

Catherine was not fond of the rococo style favored by her predecessor Elizabeth and had many of the interiors refurbished in her preferred neo-classical style. The "green" dining room was one of those. She enjoyed intimate meals here with her favorite grandson, the future Alexander I.

The design drawings for this room are preserved in the Hermitage collection.

There were many other lovely sights inside this palace. Also of interest, although we didn't get much time to look at them, were pictures of the ruins left by the Nazis and a display on the restoration.

Some of our group were disappointed that we only toured the state rooms rather than some of the private rooms. This dining room was as private as it got. 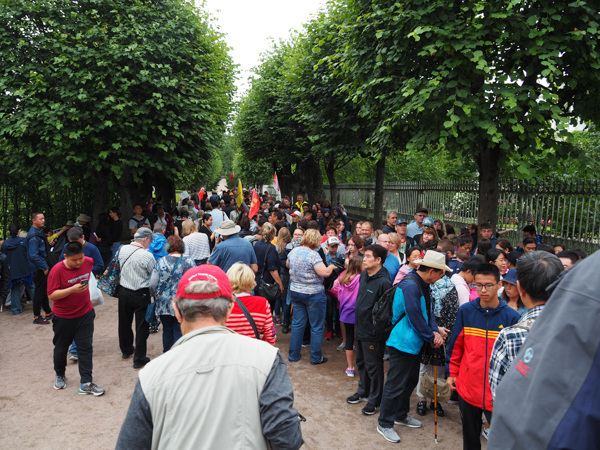 As we left the palace we could see the masses of humanity waiting in line for their turn. It was yet another reminder that traveling with a high-level tour organization has its benefits.

Our guide fussed about the Chinese tour groups. Each of the flags seen here was someone standing in line for a group of 30-40 people who might be camped out elsewhere on the grounds while they waited. Some groups had brought chairs or stools. In addition the Chinese groups often use unlicensed guides, which may have been the source of her greatest ire. 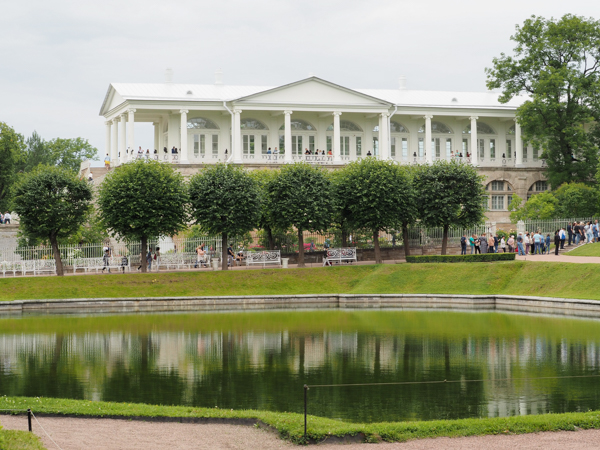 After touring the palace we had a brief excursion into the grounds.

There were many sights, but the most impressive was the Cameron Gallery. Catherine was fond of baths and there were several bathhouses on the property. This gallery was adjacent to one of them.

Catherine's doctors instructed her to get regular outdoor exercise. The Russian climate is not conducive to such much of the year. The covered promenade provided a sheltered walk with views over the gardens. 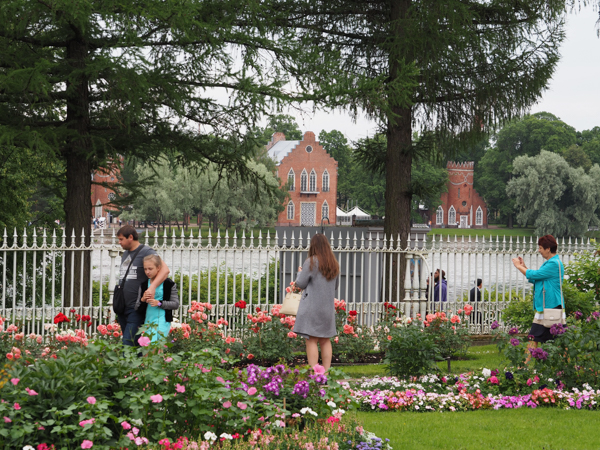 This garden and lake were adjacent to the Cameron Gallery.

Catherine, a German princess, had deposed her husband Peter III, the legitimate Romanov tsar. He later died in mysterious circumstances and she did not escape suspicion. When their son came of age, she did not relinquish her regency but continued to rule as empress in her own right. She fed rumors of his illegitimacy to keep him from the throne.

Catherine feared and hated Paul and his supporters. There is much about their soap opera relationship at the link. For this reason she did not venture outside Russia. In lieu of travel she had foreign-looking places constructed throughout the gardens at Tsarskoye Selo.

When Paul became tsar on Catherine's death, he passed laws barring women from ever ruling Russia again. He ruled for five years before being assassinated. 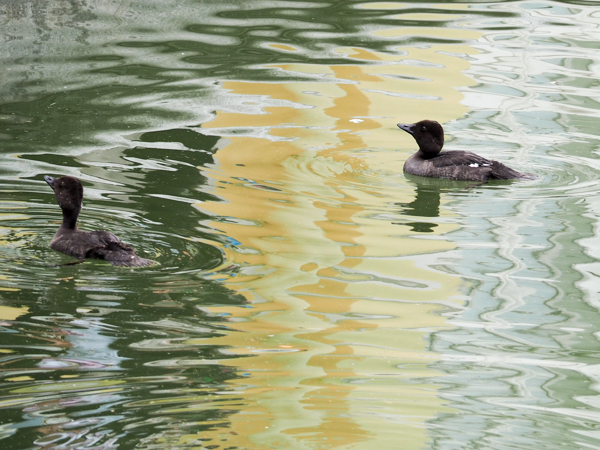 These ducks are begging in the reflecting pools by the upper bathhouse.

Few of our trips are to cities. It was frustrating to see so little wildlife. I have not been able to identify this pair.