The Winter Palace, located on the banks of the Neva River, now houses the Hermitage art collection. We were privileged to have a private (yes, private!) after hours tour. 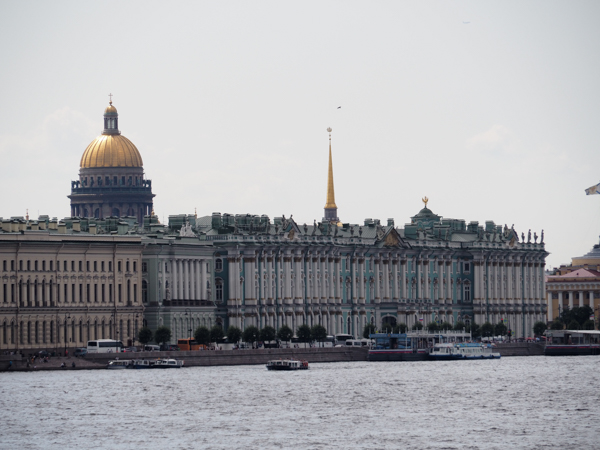 The Winter Palace and Hermitage as seen from across the river.

The colonnaded portion to the right is the Winter Palace proper, the fourth iteration.

Next to it is the Small Hermitage, built by Catherine the Great.

Continuing to the left, the facade is of the Old or Great Hermitage. It is in front of the New Hermitage.

Not visible in this image is the original Winter Palace of Peter the Great. It now houses the Hermitage Theatre. This was the only building we did not tour as there was a production scheduled.

The dome in the background is St. Isaacs Cathedral. The spire is the Admiralty. Neither has any association with the Winter Palace. 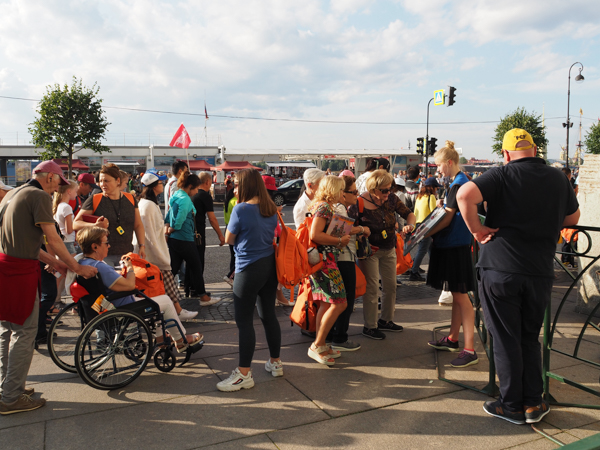 As we arrived, the museum was closing to the public. We had to wait a bit until the droves of tourists cleared out. 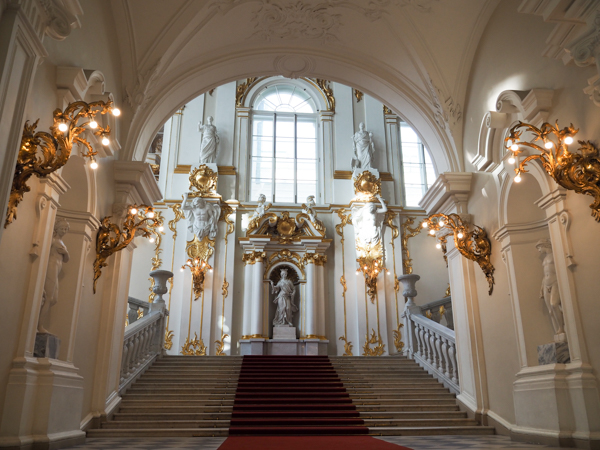 Once we were inside there was nobody but us'ens, the guides, and the guards. Even our not-very-large group was split into smaller segments for the tour.

It's no surprise that we didn't have free run of the place -- our guides shepherded us through selected exhibits. During the course of the evening we visited all the sections of the museum except the Hermitage Theatre. A production was scheduled for that evening and there was a separate set of folks waiting for it. As in the Fabergé Museum, the building is a large part of the spectacle.

On our first trip to St. Petersburg we had access to the museum at a time set aside for organized tour groups, but it was nothing like this. 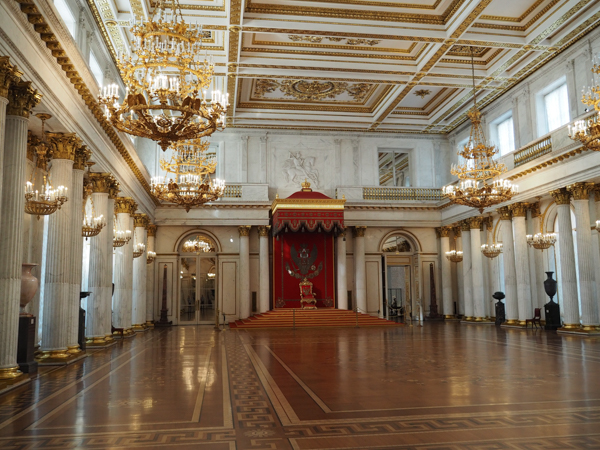 St. George's Hall is one of the more restrained reception rooms in the Hermitage.

The tsar sat on the uncomfortable-looking throne under the canopy. Above is a bas relief of St. George slaying the dragon, hence the name. 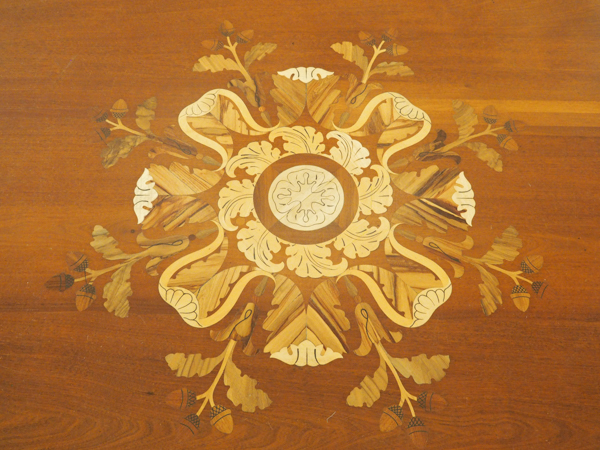 A feature of several rooms at the palace, including the St. George's Hall, is floor designs that echo the designs in the ceiling above. This is a small example.

I've been unable to determine if this is parquetry or marquetry. The latter refers to veneer and is typically used on furniture rather than floors. Parquet, often associated with floors, is geometric, which this is not! Let's just call it beautiful. 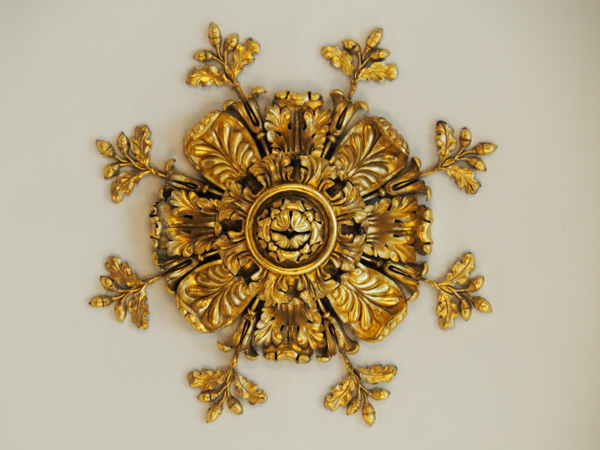 I chose small designs for the photos, but larger patterns were also reflected in the same way. 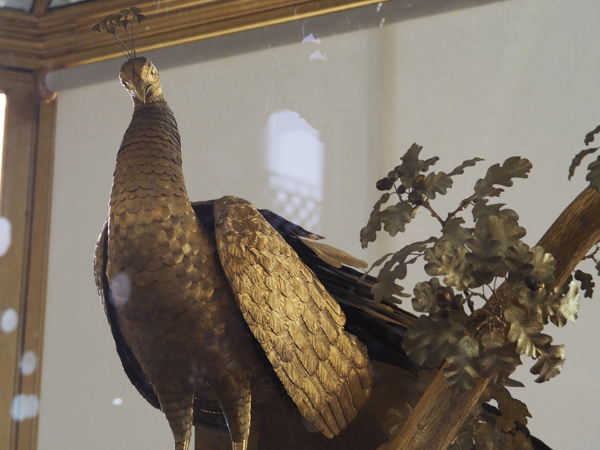 We were hoping against hope that we would get to see the fabulous peacock clock in operation (link opens in new tab), but it was not to be. The link shows off all its tricks. Even without movement it is amazing. Too large to capture in one photo.

This is called the "hanging garden" because it is located on the 2nd floor above the old stables. It is a feature of the Little Hermitage.

We spent a significant portion of time in the Rembrandt collection.

This is a detail from the Return of the Prodigal. 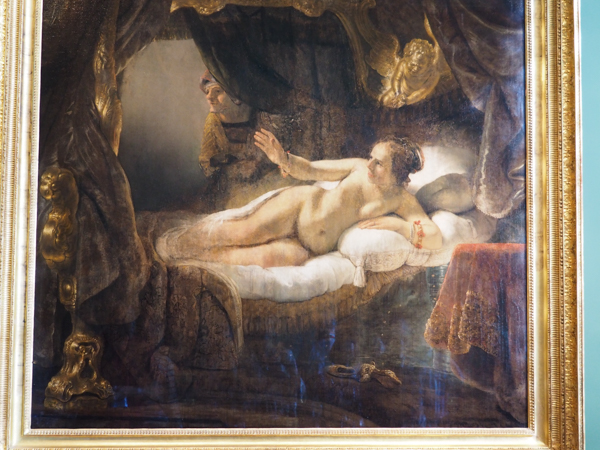 In 1985 Rembrandt's painting of Danaë was vandalized, slashed by a knife and splashed with acid. Curators started restoration immediately and the picture was put back on display in 1997.

Our guide indicated the areas of the painting that could not be successfully restored (can you see them?), but it's a miracle that any could be saved given the damage, which can be seen at the link above.

Because of this incident and fears of another, the major works are now displayed behind glass. It isn't best for the paintings, but it is better than destruction.

We could get very close to the paintings and examine them in detail, but the guide said she wasn't sure how much longer that will be possible.

I hate it that idiots rule the world by their irrational actions. 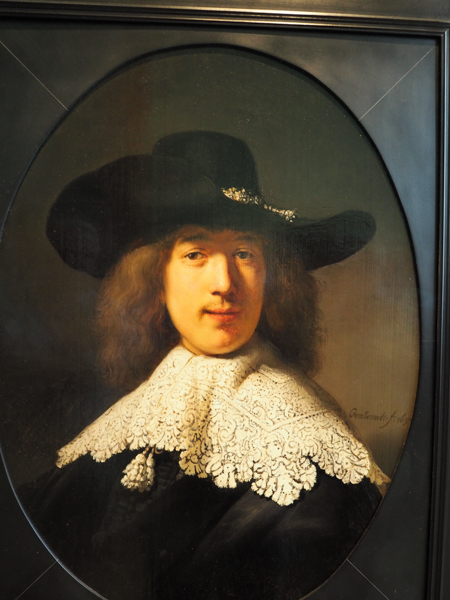 It has a signature claiming to be Rembrandt's, but he was known to sign students' work if he liked it.

The official Hermitage site lists it as "Anonymous Artist, first half of the 17th century." Others list it as by Rembrandt.

I am no art historian and have no opinion. There are many who do, however, and Rembrandt and his work are constantly being reassessed. 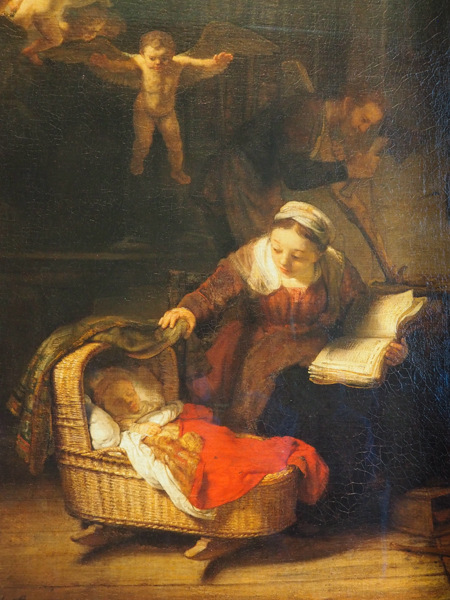 This painting of the Holy Family retains its attribution to the master.

I was disappointed that Leonardo's charming Madonna and Child was out on loan, so it was fun to discover another tender and homely scene of a young mother and her baby -- set aside the putti! 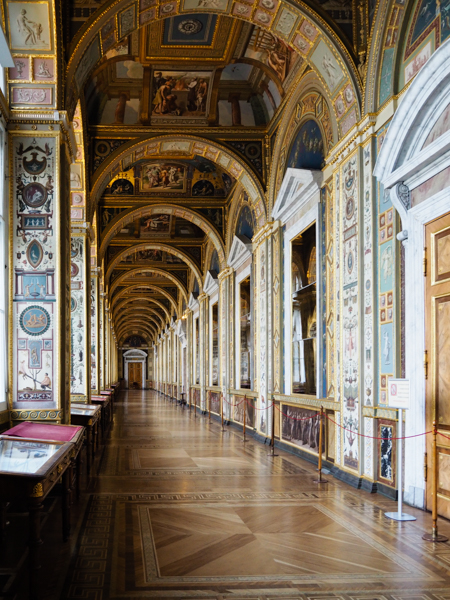 In the 15th century Raphael decorated a loggia in Vatican City. Catherine the Great had heard of its beauty, but was unable to travel outside Russia because of her tenuous hold on power (more on that later).

Since she could not travel to see it and could not buy it, she decided to copy it. She hired Architect Giacomo Quarenghi to reproduce the loggia. As we were told he obtained precise information on the loggia in order to reproduce it in St. Petersburg. 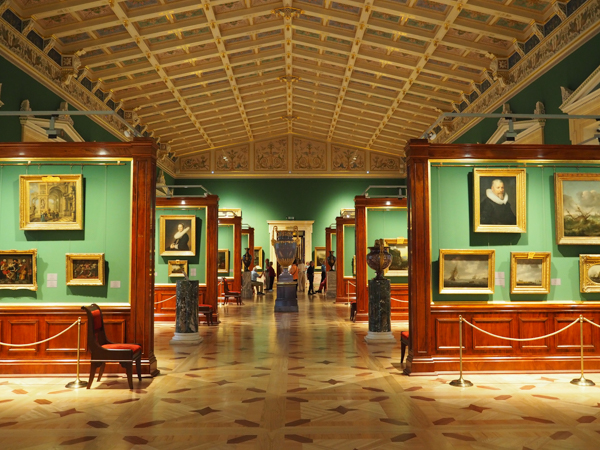 I took many more pictures of the building and the individual exhibits, but enough is enough. This special tour was yet another high point of the trip.

The chairs here and there were an unexpected blessing. I found that sciatic pain was an unwelcome attendant on this trip. I can walk, swim, ride a horse, ride a bike, do any number of things EXCEPT stand and saunter. The slow pace of our tour was excruciating! One of our fellow travellers and I kept a sharp eye out for any opportunity to sit. The Hermitage provided many such opportunities.